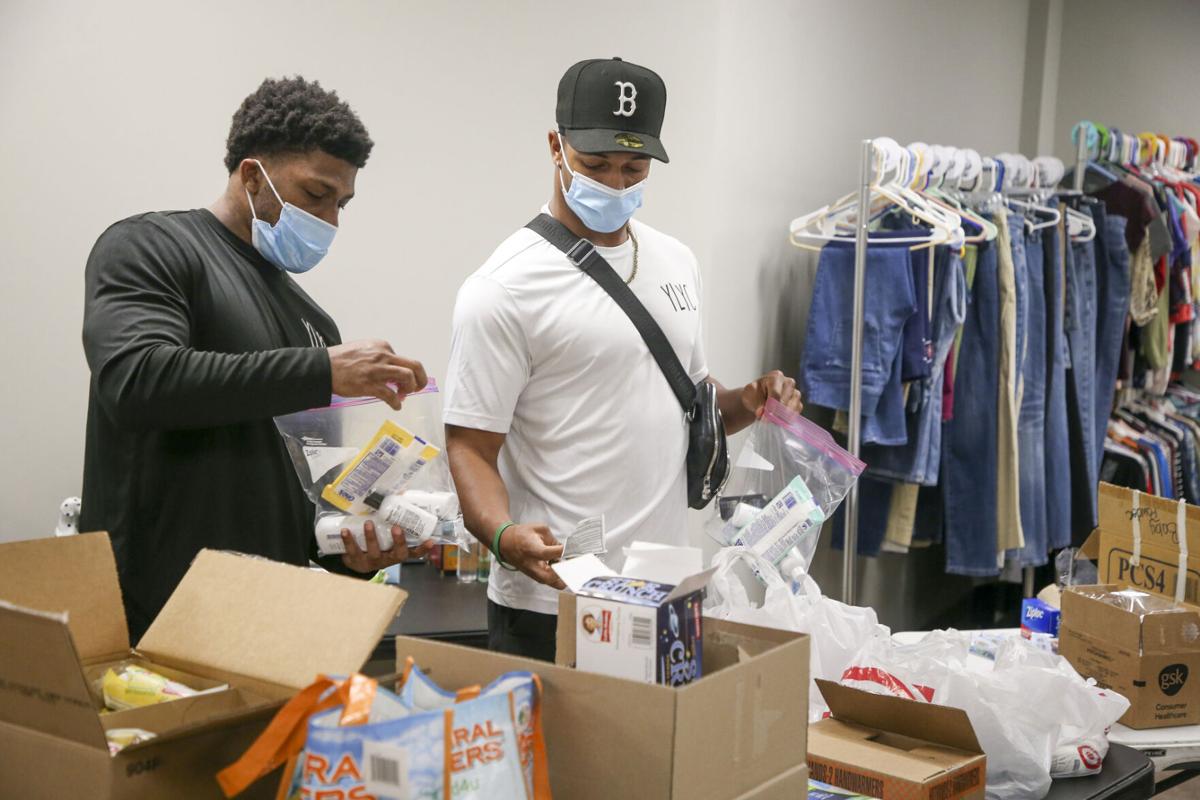 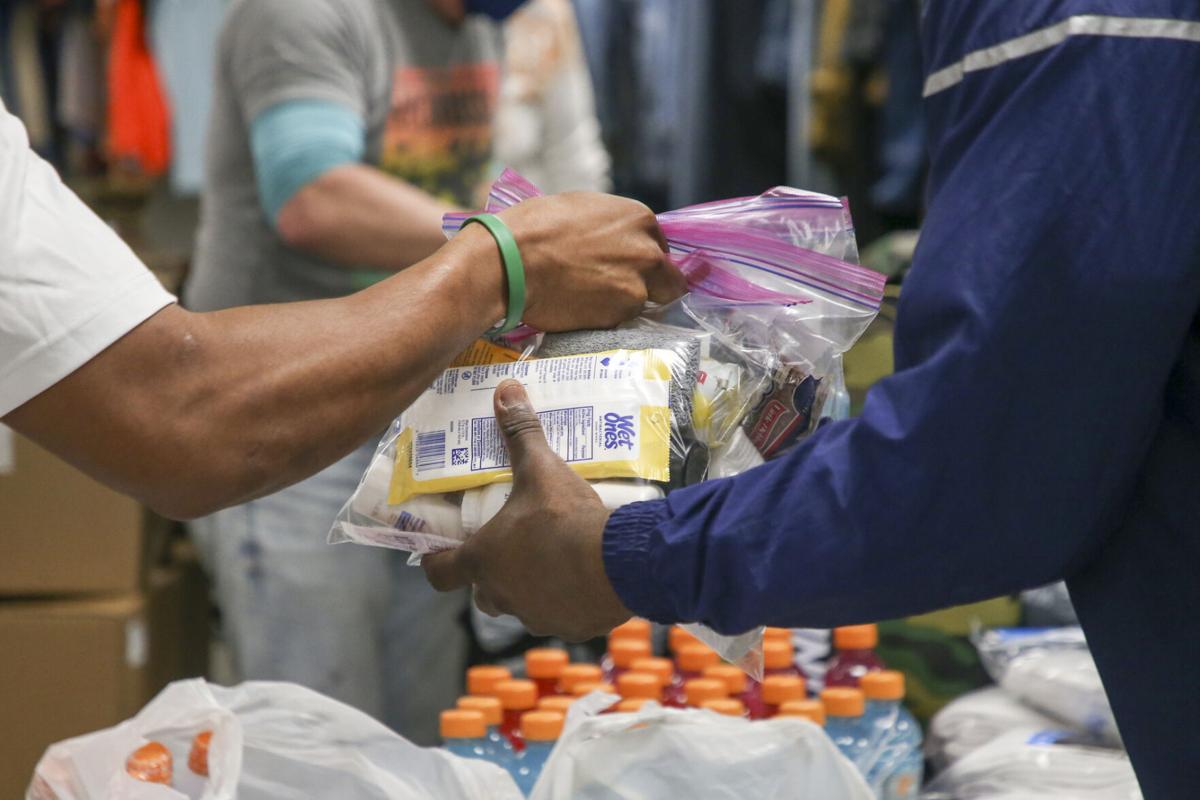 Oklahoma State running back Chuba Hubbard fills bags with toiletries and other essentials to distribute to the homeless while volunteering at Tulsa Day Center on on April 3.

Chuba Hubbard’s last public act as an Oklahoma State Cowboy was to try to help.

The soon-to-be NFL running back drove to downtown Tulsa April 3, filled backpacks with food and toiletries at the Tulsa Day Center, then helped distribute them to some of our city’s homeless. He brought OSU teammates Amen Ogbongbemiga, LD Brown and Amadou Fofana along.

“This is who he is deep down in his core,” Ogbongbemiga said. “He cares.”

“It shows what type of guy he is on character,” Brown said. “You want those guys around.”

The Cowboys were better for having Hubbard around, and not just because he totaled 3,938 yards and 36 touchdowns the past three seasons.

Recall the episode last June when Hubbard called out Mike Gundy for wearing a One America News Network t-shirt on a fishing outing. A day in which Gundy could have easily lost his job, his team or both ended with Hubbard standing next to his coach and saying: “From now on, we’re going to focus on bringing change.”

An attempt at something constructive out of a destructive situation. An attempt to make things better within the confines of what Gundy refers to as the “Cowboy culture.”

“Yeah, definitely,” Hubbard said during a work break at the Tulsa Day Center. “The biggest thing that happened there was trying to have a positive impact on the things going on around the world. Obviously 2020 was a year of adversity for everybody. A lot of learning lessons, a lot of growth, a lot of fighting through hard times. I definitely felt like that happened at OSU. I feel I became closer with a lot of my teammates. I feel the program became a better place.”

“The whole purpose of that was to create a more comfortable environment for everybody,” said Ogbongbemiga, who is also off to pro football after being OSU’s defensive leader. “Chuba took the initial step, but both us were kind of the voices. We were hearing feedback and wanted to give them a voice, give everybody a voice, people that may not have been taken as serious.

“That was really the whole initiative, just try to make everybody comfortable, make it a better place. I truly think it happened that way. A lot more people were comfortable.”

It hasn’t been easy arriving here. A 21-year old who steps out onto social media to admonish his 53-year-old coach is going to catch some heat. Hubbard caught more than his share last summer.

Last fall when he struggled to regain the form he showed in eclipsing 2,000 yards in 2019, a byproduct of both OSU’s learning-on-the-job offensive line and what Hubbard called “lingering issues” from two surgeries after the ’19 season, a pocket of less forgiving fans held the Gundy episode against him.

It was enough to make you wonder if Hubbard had to go it over again, would he change anything?

“No. I live with no regrets,” he answered after running a 4.45 40-yard dash at OSU’s pro day April 1. “I believe everything happens for a reason. I’m a God-fearing man. I believe he has a plan for everything. Whatever happens I’ll grow from, learn from it and keep moving.”

Hubbard sees everything that has happened since leaving Sherwood Park, Alberta, for Stillwater four years ago as an excuse to learn and grow. We should all be so self-aware.

We should all be so self-assured.

“At the end of the day I’m me. I’m Chuba,” Hubbard said. “I’m somebody that’s going to stand up for what’s right. I’m going to speak up when I think something’s wrong. I think of myself as a leader, not just on the football field but also off the field. Whenever I’m called to do something or I need to speak up on something, I’ll do that.

“I’m still working on a lot of things. But when it comes to that aspect of things, I do think that’s a good attribute to have.”

It is a glorious attribute, the willingness to rise above one’s surroundings in an effort to improve them.

“You don’t generally come across that in the world,” Brown said.

Brown sized up his fellow OSU running back that afternoon at the Tulsa Day Center, how Hubbard had gone from an 18-year-old “little Canadian, just a track star” to a “young man” with his own nonprofit philanthropy aimed at disadvantaged children called “Your Life, Your Choice.”

“You can do something with your platform, do something for the greater good,” Brown noted. “Maybe that will trickle down to the young guys. ‘Man, I wanna do the same thing as Chuba one day.’ Who doesn’t like helping others?”

If it does trickle down, Hubbard will have made a final mark on the Cowboy culture. He’ll be more assured he left his program better than he encountered it.

Not that there should ever be any doubt about that.

Soon, Dillon Stoner and that chip on his shoulder will begin to represent the Allan Trimble-era Jenks Trojans in an NFL mini-camp.

OSU, OU and Tulsa combine for 10 draft picks in the 2021 NFL Draft after six athletes were chosen Saturday

Guerin-teed it was quite a week: Tylan Wallace, Zaven Collins remind us why we put up with Roger Goodell, NFL BS every draft weekend

Don't watch the draft for the silliness on stage, tune in to see players and their families sharing dreams finally realized

After getting four picks in the 2021 NFL Draft, Oklahoma State got four more athletes to join teams as undrafted free agents shortly after the draft concluded.

He was taken with the 39th pick overall.

The teams will play again Saturday and Sunday in Norman.

One shot was the difference Wednesday, as the Oklahoma State men’s golf team edged rival Oklahoma by the narrowest of margins to claim its sec…

Oklahoma State running back Chuba Hubbard fills bags with toiletries and other essentials to distribute to the homeless while volunteering at Tulsa Day Center on on April 3.