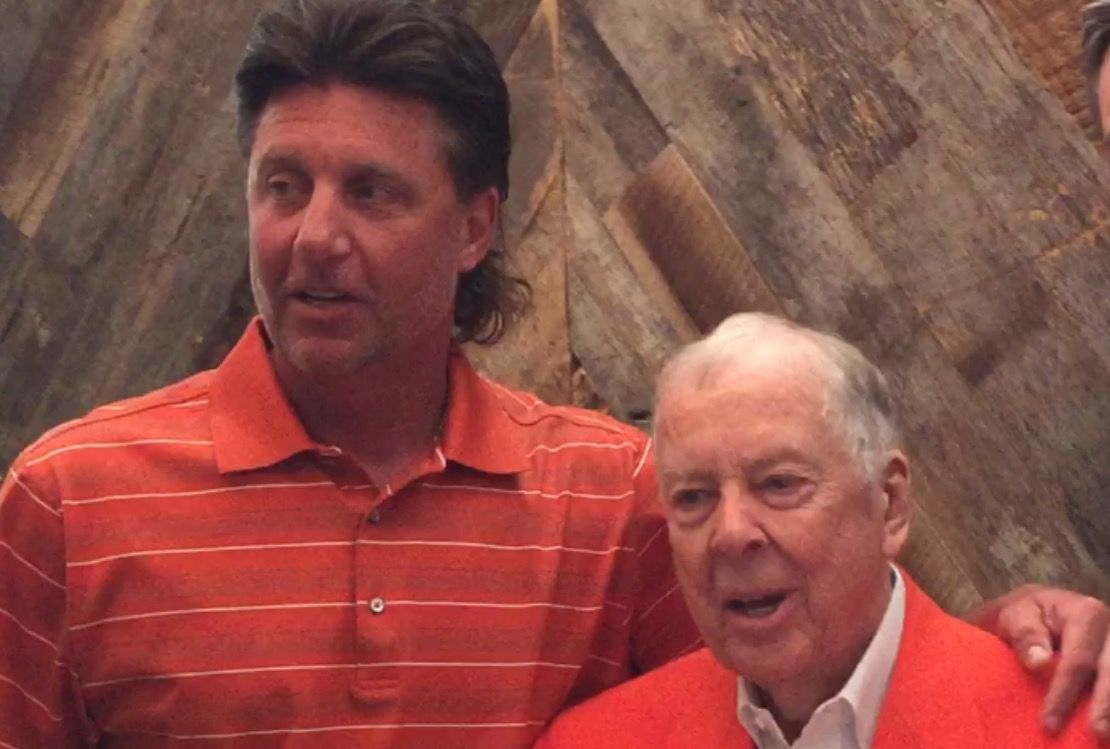 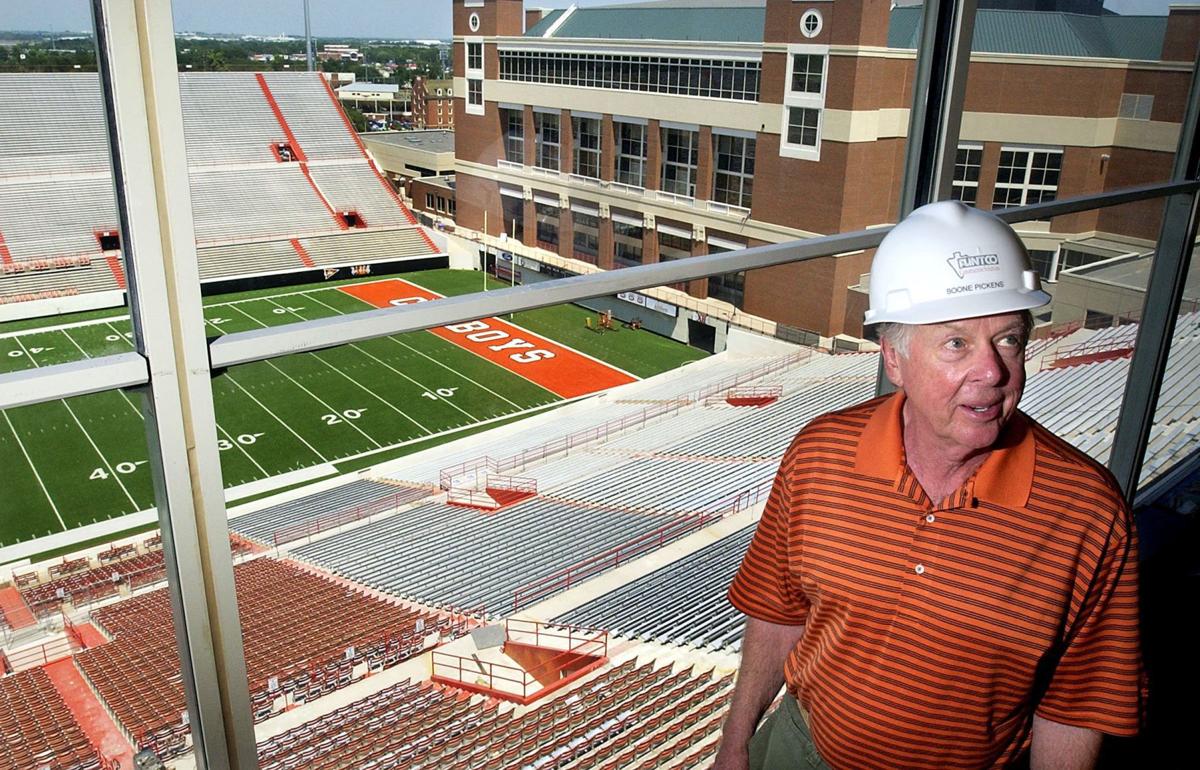 His home-game appearances always attracted attention. He has the best of parking places, positioned near one of the stadium’s south gates.

When you donate more than a half-billion dollars to a university, you get special consideration on parking and a beautiful suite above the 50-yard line.

That suite will be occupied by friends of Pickens on Saturday, as OSU hosts McNeese State for the Cowboys’ home opener, but Pickens himself apparently will not be here.

At 91, he continues to battle the effects of multiple strokes — the first of which occurred in December 2016.

A status report provided by Jay Rosser, Pickens’ chief of staff: “While (Pickens) continues to come to the office every day, travel is becoming increasingly challenging for him.”

Selfishly, because there always was the expectation of great and occasionally controversial quotes, I’m disappointed there won’t be a Pickens media session before the 6 p.m. kickoff.

Starting with the 2007 game at Georgia, either before the season opener or the home opener, Pickens was available for a pregame Q&A.

Mike Gundy refers to those sessions as having been Pickens’ “state of the union” addresses, and Gundy always was a conversation topic.

Usually, there was praise. Occasionally, though, Pickens would fire a shot at the Cowboys coach.

“You never knew what you were going to get,” Gundy said this week.

Pickens before the 2010 opener against Washington State: “Mike is under long-term contract with us and he’s had a good five years. Was last year perfect? No. I didn’t like the last two games.”

Before the 2014 opener against Florida State in Arlington, Texas: “The only (opponent) we haven’t been competitive with is OU. Like last year, we’re a 10-point favorite and lose. ... We need to do better on OU.”

And before the 2016 opener against Southeastern Louisiana: “I would like to beat OU. Mike has struggled with that game. I think he’s 2-9, so we’re not competitive with OU. By golly, we beat Texas. We’re the only team that has beaten Texas four in a row in Austin. If we can beat Texas, we sure ought to beat OU.”

In most cases, the Bedlam references were unsolicited. Pickens wasn’t asked about the Bedlam series. He just chose to use those platforms for mentions of his frustration.

This week, when it was mentioned to Gundy that it might be difficult for Pickens to attend games this season, the coach didn’t reflect on his history of beefs with the man whose donations drove the 2003-09 stadium renovation.

“It’s a sad time for everybody,” Gundy said about Pickens’ health issues. “Mr. Pickens and I have gone head-to-head for years about things, (but) he’s a big part of all of this.

“It would have been difficult for this to happen without him. Everybody knows that.”

Pickens has been a participant in every Cowboy Pro-Am golf fundraiser since the event’s 1973 inception. That’s a streak of 46 consecutive appearances.

As it involves the reunion of former OSU golfers and donors, the Cowboy Pro-Am is the program’s No. 1 social exercise each year.

The Pro-Am is scheduled for Friday at Karsten Creek. Rosser said Pickens can’t be there.

“Won’t be the same without him,” Rosser said.

That streak ends, as does this one: Dove season began on Sunday. Gundy was up at 3:15 a.m. so that he and his sons could go hunting. Pickens is a renowned bird hunter. Before this week, he had been involved in an opening-day dove hunt for 76 consecutive years. He was unable to hunt on Sunday.

At the age of 88, Pickens was in the gym for daily workouts and traveled globally. He was at the highest level of vitality. Now, at 91, he’s not able to be in Stillwater for a football game.

For so many years, if you timed your Stillwater game-day arrival just right, you might notice the descent of Pickens’ Gulfstream 550 jet. For so long, he was a fixture in that 50-yard line suite.

On Saturday, Pickens will view the McNeese-OSU webcast while at his amazing Texas Panhandle ranch. He may watch the entire 2019 season — and subsequent seasons — from the comfort of home.

Gundy said as much: Even if Boone Pickens never attends another game at Boone Pickens Stadium, his impact on the university and football program is indelible.

Guerin Emig: Mike Gundy and Thurman Thomas should sit down, crack open a beer and have a long, therapeutic talk

The Jacksonville Jaguars will host the Miami Dolphins at 7:20 p.m. tonight on NFL Network.

Oklahoma plummeted in the Top-25 polls that were released on Sunday while Oklahoma State dropped again after winning its first two games.

OSU football analysis: Focusing on QB pressure pays off for the Cowboys defense with five sacks against West Virginia

Freshman Shane Illingworth is the starting quarterback for No. 15 Oklahoma State in today’s game against West Virginia.

In a game where the No. 15 Cowboys were without their starting quarterback, Spencer Sanders, because of an ankle injury he suffered against Tula last week, Brown had a career-high 11 carries. His 103 yards was his most rushing yards since setting his career-high of 110 yards against Missouri State on Aug. 30, 2018.

OSU football notebook: Offseason work pays off for LD Brown: 'I felt a difference playing at 200'

Oklahoma State running back LD Brown worked hard over the offseason to get his weight over 200 pounds. His offseason work paid off in the season opener against Tulsa.

The Cowboys are still waiting to see if starting quarterback Spencer Sanders will be available against West Virginia after being forced to play three different quarterbacks in the 16-7 win against Tulsa.