Bill Haisten: In a game both terrible and dramatic, OSU survives the Golden Hurricane
Share this
{{featured_button_text}}
1 of 3 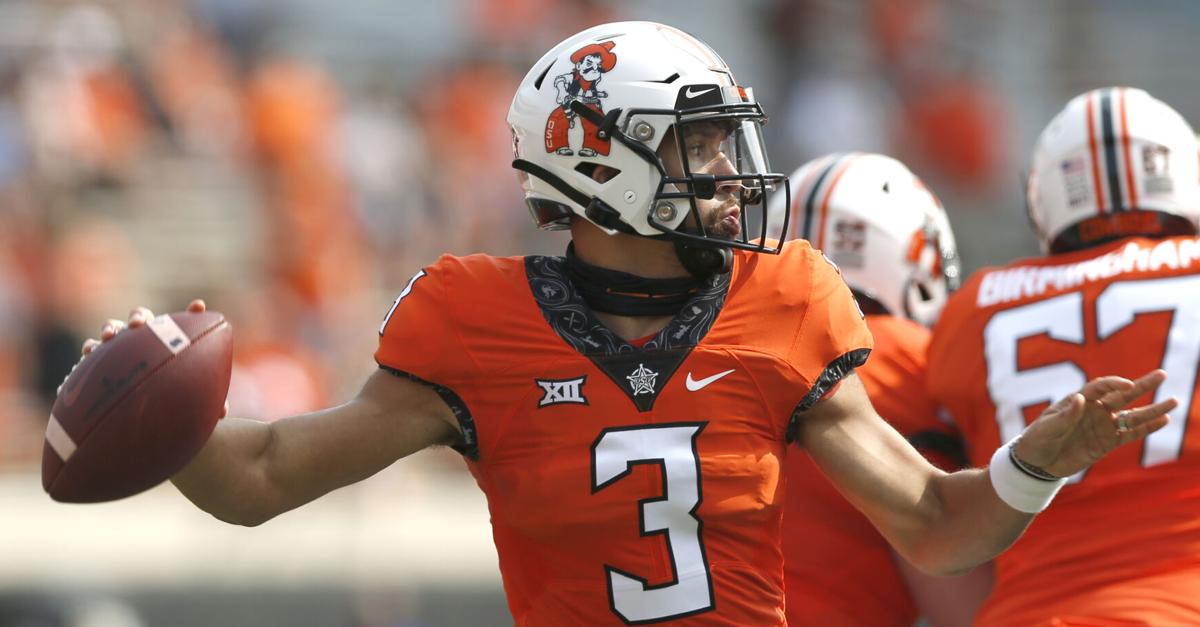 Oklahoma State quarterback Spencer Sanders was injured during the opening quarter of Saturday's victory over Tulsa. His availability for next week's Big 12 opener against West Virginia has not been determined. 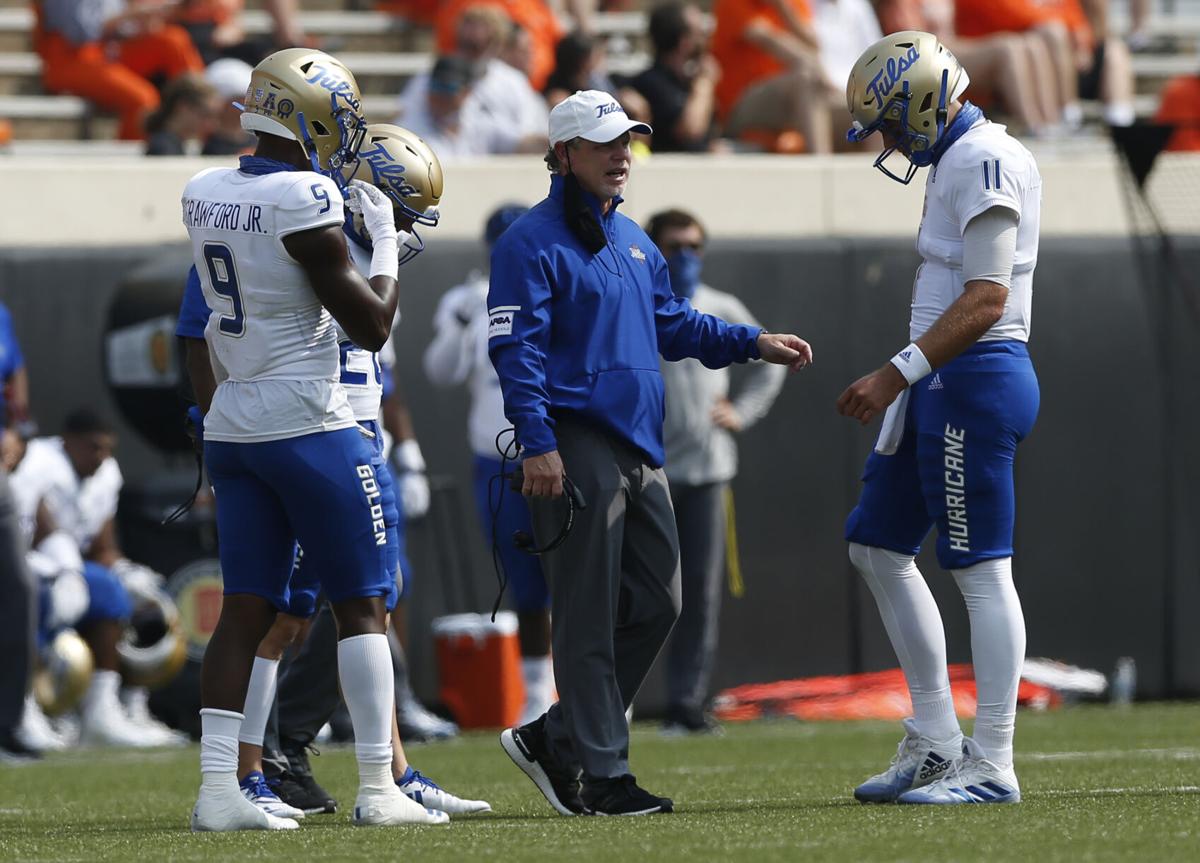 Tulsa coach Philip Montgomery talks with his team during the first half Saturday at Boone Pickens Stadium in Stillwater. 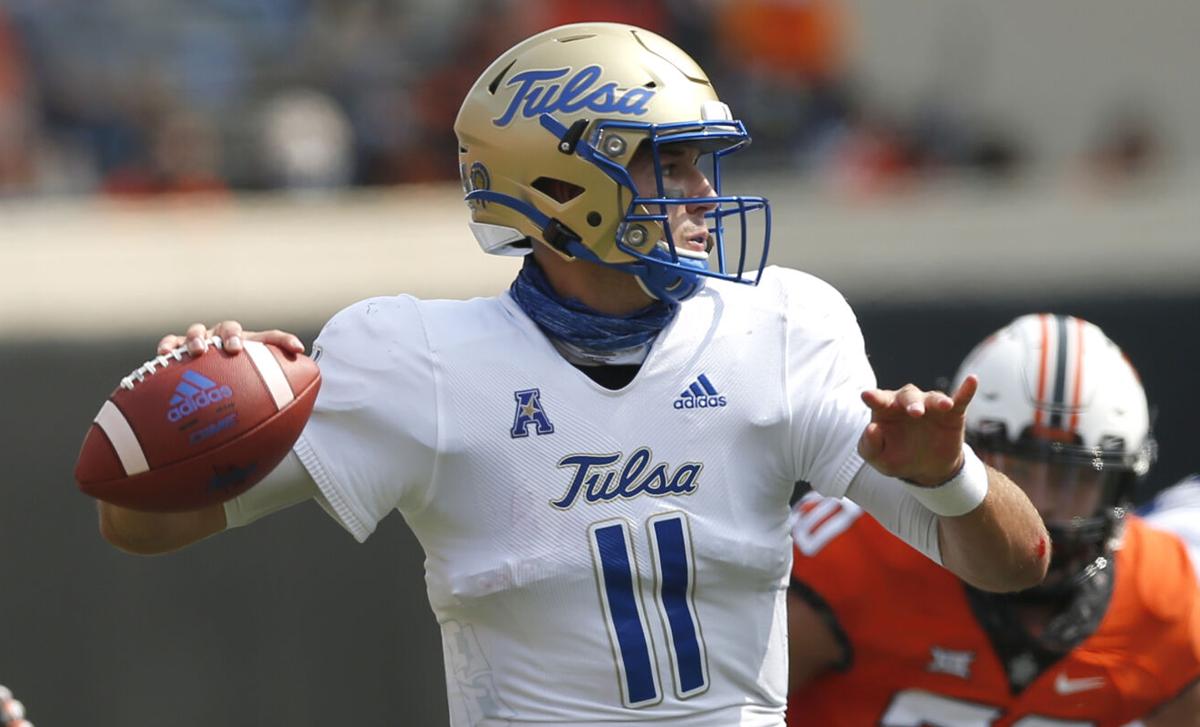 During Saturday's 16-7 loss at Oklahoma State, Tulsa's Zach Smith passed for 166 yards and one touchdown and was intercepted once.

STILLWATER — On Nov. 3, 1951 — in a game played six months after T. Boone Pickens graduated from Oklahoma A&M with a geology degree — the Aggie football team hosted the University of Tulsa.

Don Babers entered at No. 5 nationally in passing yards, but the Aggie QB was smoked by Golden Hurricane linebacker Marvin Matuszak. As Babers was helped to the sideline, where it was determined he had been concussed and would not return to action, the first-quarter score was knotted at 7-7.

When time expired, the Hurricane celebrated a 35-7 victory.

Before Saturday, against Oklahoma A&M teams and Oklahoma State teams, TU since 1951 had been 0-21 in games played in Stillwater.

On Saturday, the 2020 Tulsa-OSU contest bore a resemblance to the 1951 model, and Hurricane coaches and players had to feel sick that they failed to capitalize on an opportunity to end their program’s 69-year run of futility on OSU turf.

Is it possible for a football game to be both terrible and dramatic?

Tulsa-OSU was that type of football game.

In spite of an astonishingly modest total of 277 offensive yards, the 11th-ranked Cowboys escaped with a 16-7 win. In the only game of the day involving a Big 12 team, this performance didn’t do much to repair the conference’s reputation after last week’s Iowa State and Kansas State home losses to Sun Belt opponents.

This is what compelled me to check the details of the 1951 game: During Saturday’s first quarter, OSU quarterback Spencer Sanders sustained an injury described by OSU officials only as having involved “a lower extremity.”

Gundy said after the game that Sanders’ injury isn’t serious, but the third-year sophomore and second-year starter did not play after the first period.

OSU’s Big 12 schedule opens with next Saturday’s home challenge from West Virginia. Sanders’ condition was a big storyline Saturday. If he is inactive for an extended period, it becomes a huge storyline and could seriously affect OSU’s quest for a special season.

During Bullock’s eight possessions, Oklahoma State was scoreless. There were 91 total yards with five punts and an interception.

Illingworth’s first three passes were completed for 24 yards to Tylan Wallace, for 8 to Jelani Woods and for 36 to Wallace. Four seconds into the fourth period, on Chuba Hubbard’s 3-yard run, OSU finally scored its first touchdown of the season and took a 10-7 lead.

Even before Sanders was taken to the locker room, the Oklahoma State offensive line wasn’t very good. With Sanders on the field, the Cowboys netted only 71 yards on 18 plays. That’s an average of 3.9 yards per snap. Against Tulsa last year, OSU averaged 7.4 yards per play.

During the summer, the Cowboys lost two returning offensive-line starters from the roster. Obviously, there was the potential for a downward turn in the quality of blocking, but, wow — this pronounced of a drop was not expected.

For most of the last seven seasons, while having a plethora of NFL-level performers at the skill positions, OSU has been below average up front. The first live look at the 2020 Cowboy line was not impressive.

The Tulsa defense sacked Cowboy QBs six times and limited OSU to 139 rushing yards and a pitiful average of 2.8 per attempt. I believed Hubbard would have 139 yards by halftime. He ran for 2,094 last season. On Saturday, and on 27 carries, he netted 93 yards.

A rebuilt Hurricane defense was pretty good and has a chance to be quite effective against most American Athletic Conference opponents.

“The story of the game,” as Gundy said, was an Oklahoma State defense that played its best in the most important moments. Tulsa was 0-of-11 on third-down conversions and 1-of-4 on fourth down.

During the second and third quarters of this game, there was a real feeling TU might replicate the circumstances of 1951: to take advantage of an OSU team that struggled without its starting quarterback, and to record what would have been Philip Montgomery’s biggest victory in six seasons as the head coach.

On field goals, is there any program more cursed than Tulsa’s? The Hurricane had a chance to tie the score with 10 minutes left to play, but a freshman kicker misfired on a 26-yard attempt.

Because of the coronavirus-related limitation on Boone Pickens Stadium occupancy, this unsightly season opener was witnessed by the smallest OSU home crowd since 1967. There was a 75% reduction in attendance, which would suggest there also were 75% reductions in ticket revenue and concessions revenue.

As for actual football, there was a 100% reduction in what was expected from the Cowboy offense.

Oklahoma State quarterback Spencer Sanders was injured during the opening quarter of Saturday's victory over Tulsa. His availability for next week's Big 12 opener against West Virginia has not been determined.

Tulsa coach Philip Montgomery talks with his team during the first half Saturday at Boone Pickens Stadium in Stillwater.

During Saturday's 16-7 loss at Oklahoma State, Tulsa's Zach Smith passed for 166 yards and one touchdown and was intercepted once.