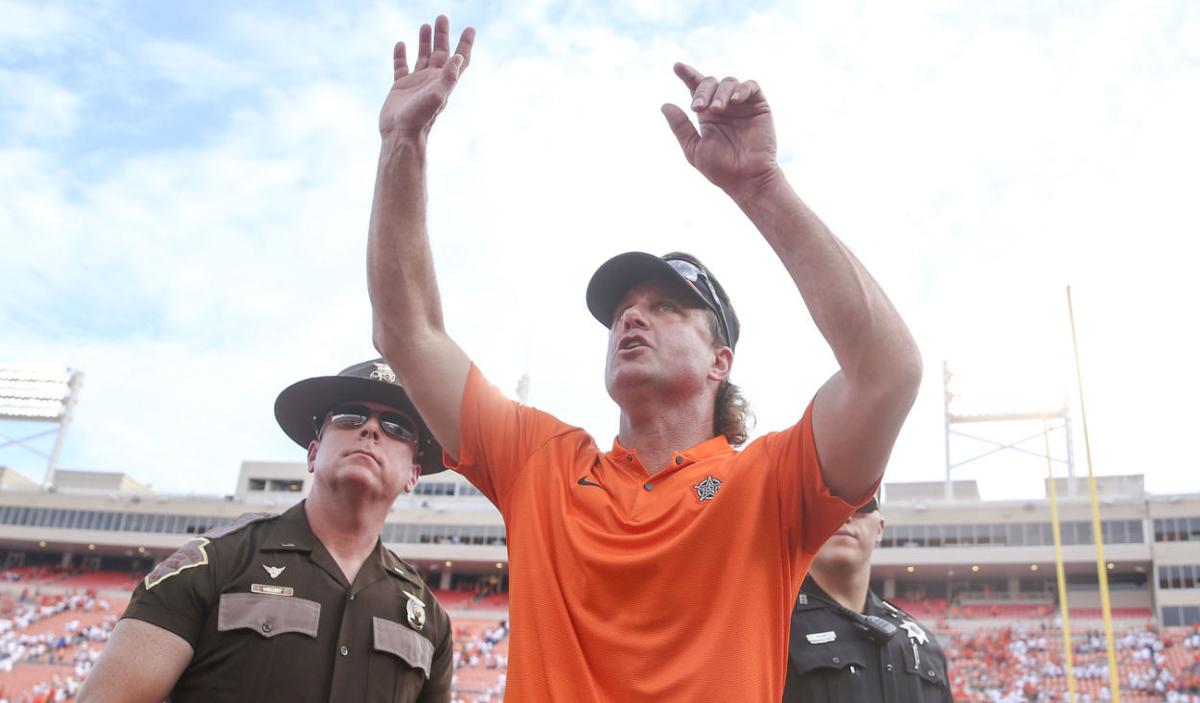 Mike Gundy led OSU past Boise State at Boone Pickens Stadium in 2018 before a crowd of 54,974. If approved by state officials, OSU will set no limits on home attendance during the 2020 season. IAN MAULE/Tulsa World file 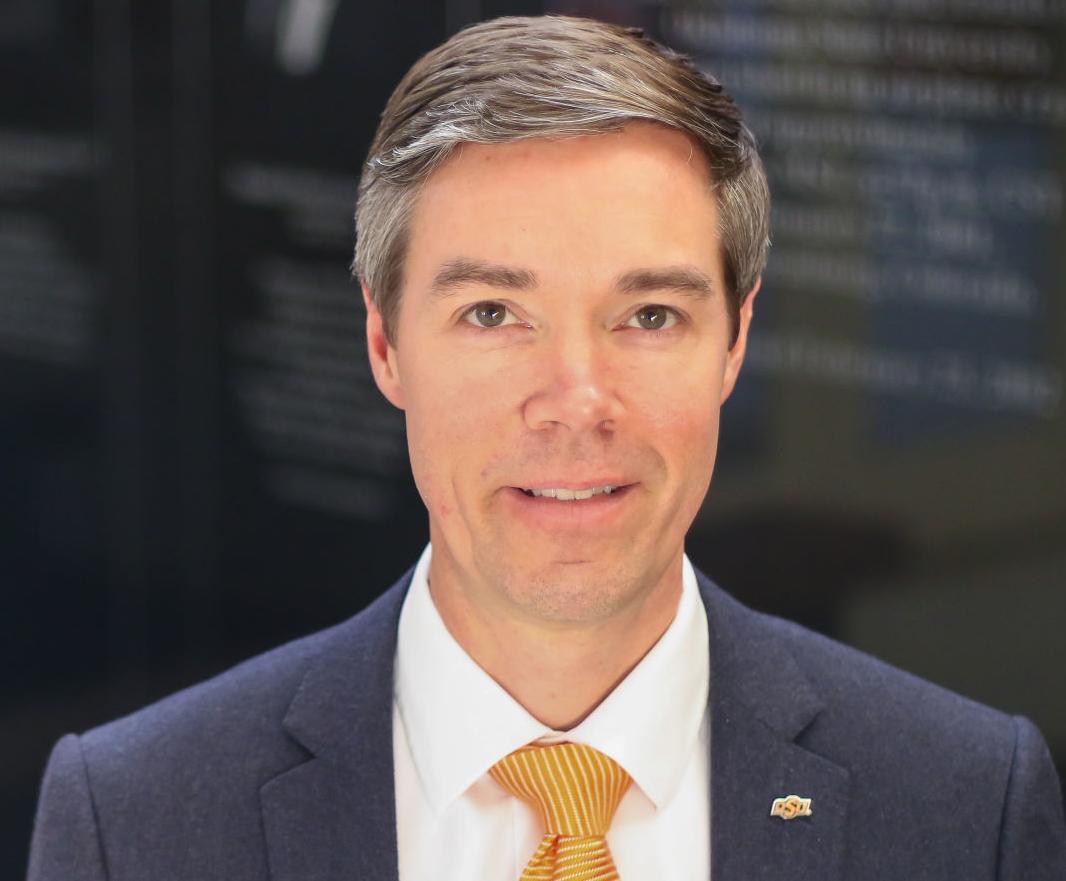 Mike Gundy led OSU past Boise State at Boone Pickens Stadium in 2018 before a crowd of 54,974. If approved by state officials, OSU will set no limits on home attendance during the 2020 season. IAN MAULE/Tulsa World file

On the lengthy list of the unprecedented and the unknown in the 2020 sports world, there is the complex matter of college football attendance.

There are strong indications that Oklahoma State and Oklahoma will start the season on time, with the Cowboys scheduled to host Oregon State on Sept. 3 and OU hosting Missouri State on Sept. 5.

Among so many unanswered questions, though, is this giant of a topic: How many people will be allowed to attend those games?

While continuing to sell tickets, OU doesn’t know today whether it will be able to accommodate more than 28,000 fans (one-third of the Memorial Stadium capacity). By early August, Oklahoma’s coronavirus trends and statistics could allow OU and health officials to agree that it’s safe to have crowds of closer to 50,000 or perhaps even a full-house total of 83,000.

While acknowledging the gamut of possibilities, OU leadership figures haven’t predicted anything specific.

From an Oklahoma State leadership figure, however, there is something very specific.

During a Saturday phone interview with the Tulsa World, OSU deputy athletic director Chad Weiberg indicated that his university is planning to enter the season with no limitations on attendance.

“If the health officials and (government and university) officials allow us to, we will play in front of a full stadium,” Weiberg reported. “Right now, that is the only scenario that we are planning for. We’re not spending time right now — a lot of time — on other scenarios. If we get to the point where we need to do that, we will. But right now, we’re optimistic (with) the scenario we’re planning for.

“This is what we do. At this point, we’re trying to go about business as usual, as much as possible.”

When asked whether OSU fans would be required to wear protective masks, Weiberg replied, “We will plan to follow the health guidelines and recommendations at that time.”

As of Friday in Oklahoma, there were 669 active cases of COVID-19 — the lowest total in two months. In Stillwater and Payne County, according to the State Department of Health, there have been 45 confirmed cases overall and one death.

While Stillwater does have relatively clean health statistics, the majority of those who attend OSU home games will have traveled from the Tulsa area, the Oklahoma City area and elsewhere.

Ultimately, Weiberg said, “we won’t be the ones that make the decision on (football attendance). That will come down from (health officials at all levels).

“We want to play football and we want all of our fans to be there who want to be there,” Weiberg said. “We’ve been wrapping up our season-ticket renewals. We have to spend a couple of weeks cleaning that up and getting people the new seats they’ve requested and things like that. Then we’ll open it up for new season-ticket sales on Monday.

“We’re a little bit behind schedule because of the (pandemic disruption). We delayed the season-ticket renewal deadline by a month. Otherwise, we are proceeding as we would be every other year at this point.”

During a SiriusXM interview on Thursday, Big 12 Commissioner Bob Bowlsby was asked about his expectation for 2020 football attendance.

“It really depends on how things go between now and (September),” he replied.

Bowlsby also made reference to “social distance” — the practice of a person sustaining 6 feet of separation from other people. If social distancing is recommended in September and beyond, it seems a given that all schools would comply by having attendance limits.

For reaction to the Oklahoma State plan to have big crowds at Boone Pickens Stadium, the Tulsa World contacted a representative of Gov. Kevin Stitt.

“The governor remains committed to making safe and responsible decisions based on the data in our state,” said Charlie Hannema, Stitt’s chief of communications. “He has been in contact with officials from OU and OSU, along with the Big 12, and has offered the support and expertise of the Oklahoma State Department of Health as this situation continues to evolve.

“While the governor is very much looking forward to football season, no decisions have been made on events with such large capacities at this time.”

Very few of the FBS-level schools have announced specific attendance plans. Iowa State has left itself the flexibility for change, but its current plan is to have no more than 30,000 fans at 61,500-seat Jack Trice Stadium.

Weiberg says Oklahoma State also is flexible and, if required, can make adjustments in its attendance strategy.

“We have almost a hundred days before (the season) starts,” Weiberg said. “There will be a lot that we learn between now and then. Health officials will use what they are learning to be able to guide us and what we should be doing.

“Obviously, from the state level and university, we’ll adhere to that. In the meantime, we’re planning as if we will kick off in front of a full stadium.”