Bill Haisten: For ESPN+ producer Bo Mattingly, the plan is to follow OSU ‘all the way to the end’
Share this
{{featured_button_text}}
1 of 2 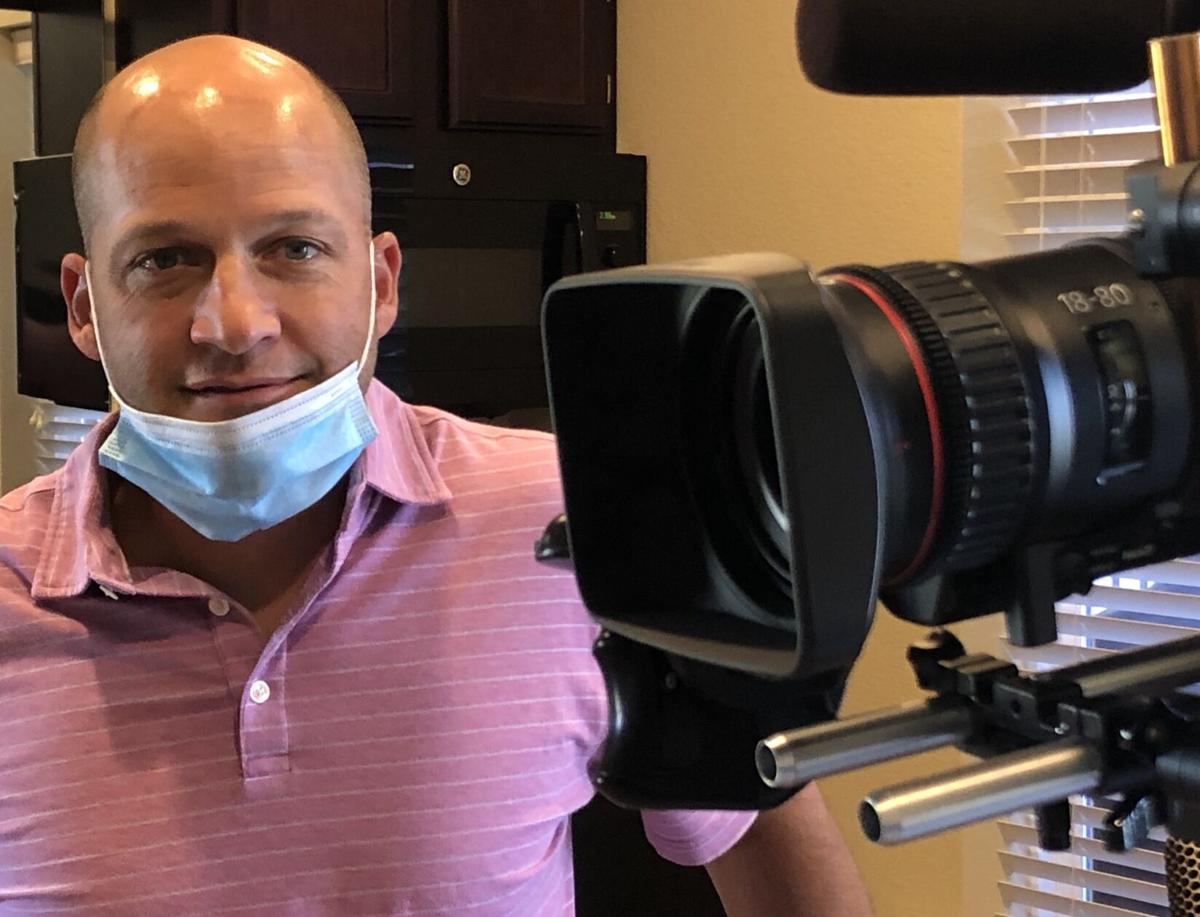 Bo Mattingly is the producer of the “Our Time: Oklahoma State Football” series on ESPN+. For as long as the 2020 Cowboys are playing football, a new episode will be released each Thursday. 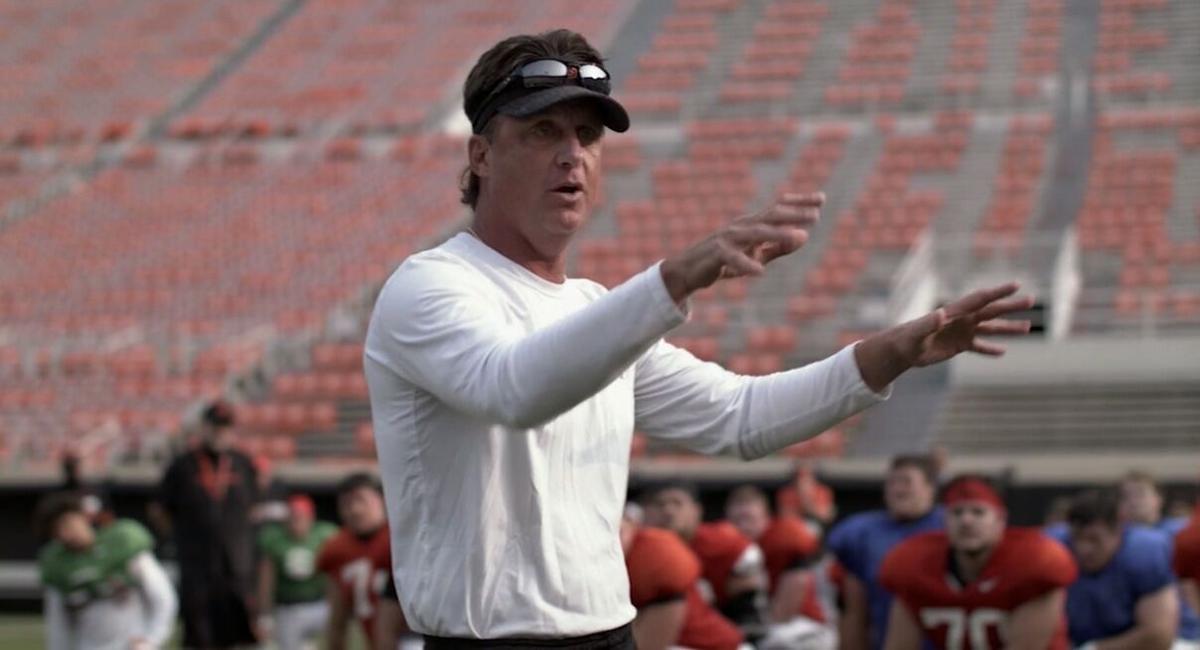 In a screenshot taken from this week’s episode of the “Our Time: Oklahoma State Football” series on ESPN+, Mike Gundy addresses his players following last weekend’s scrimmage at Boone Pickens Stadium.

A year ago, Bo Mattingly produced for ESPN+ the “Miles to Go” series that centered on Les Miles’ first season as the Kansas football coach.

For as long as the 2020 Cowboys are playing football, a new episode of “Our Time: Oklahoma State Football” will be released on the ESPN+ streaming service.

Since May 26, the Fayetteville, Arkansas-based Mattingly and his crew have gotten a behind-the-scenes look at OSU’s management of COVID-19 challenges, some aspects of Gundy’s turbulent summer, Gundy with a pet turtle, Gundy baling hay on a tractor, Spencer Sanders’ fishing talent and a lengthy preseason camp that leads to Saturday’s 11 a.m., ESPN-televised season-opening clash with the University of Tulsa at Boone Pickens Stadium.

“All plans can change, obviously, but the plan now is to follow Oklahoma State all the way to the end,” the 44-year-old Mattingly said. “It could go to the Big 12 championship game or the College Football Playoff. Or, God forbid, if the season gets shut down, it could end early.

“But we do have a plan for an entire season. We’ll see if that plan holds up.”

In Episode 6 that premiered on Thursday, former Bixby star Brennan Presley gets a few seconds of talk time. He now is a Cowboy freshman receiver and return specialist. OSU players are shown as they watched telecasts of last week’s Iowa State and Kansas State losses. Minutes later, the Cowboys were on the stadium turf for a major scrimmage.

“Just look around the country at people getting their (butts) kicked!” Gundy told his team. “We’ve got to get serious and get ready to go.”

“I really love storytelling to give perspective and to show who people really are,” Mattingly said. “I want to show how hard these (OSU personnel) are working and how much it means to them.

“Football is hard, and you’re out there practicing when you’re not even sure there will be a game. And then when you think there will finally be a game (against Tulsa on Sept. 12), it gets postponed a week. OSU never shut down like some schools did. In Episode 6, the players talk about this training camp being the longest of their lives.”

On June 1, Mattingly was in a car with Chuba Hubbard and Amen Ogbongbemiga as they drove to the stadium for the first session of OSU testing. The next day, as Mattingly was headed back to his Fayetteville home, he was informed that he had been in close contact with OSU personnel who tested positive.

“I pulled over at a gas station,” Mattingly recalls. “I was thinking, ‘Can we continue to shoot or are we shut down? Can I even go home to my family?’ It’s one thing to hear all the talk about the virus, but when you learn you’ve been close to someone who has it, it does make you think.

“We fell in line with protocols to keep everyone safe. We feel very safe while (continuing production) during a very unpredictable time.”

Mattingly said he has been tested five times since May. “Yes,” he added, “and we’ll be tested every week during the season.”

In 2007-19, Mattingly hosted an afternoon sports-talk show that aired statewide in Arkansas. Now, he focuses solely on documentary work. Regarding the possibility of an “Our Time” series, his first pitch to Oklahoma State was delivered in February.

In March, Mattingly remembers, “I had my first meeting with coach Gundy. The pandemic was a thing, but it wasn’t what it is today. No one had been in the football building for a while, so one of the office plants was dying. I remember coach Gundy getting water for that plant.

“We knew that the (OSU football offseason) was a fascinating story, and that very few (production companies) were shooting at that time. We felt fortunate. The OSU medical staff was great about laying out medical protocols, so our people are following along with the same guidelines as the coaches and players. We wear masks and we’re smart about spacing.”

The Cowboys have a lot of young talent but many of them lack experience playing at the collegiate level. That’s why bringing an experienced Ferron Flavors was so important for the Cowboys.

OSU football: Offensive lineman Jake Springfield went from an OSU walk-on to starting for the No. 6 team in the nation

Jake Springfield wasn’t highly recruited coming out of Flower Mound High School in Texas. Now, he is starting at left tackle for the No. 6 team in the country while helping pave the way for one of the most talented running backs in the country.

Bo Mattingly is the producer of the “Our Time: Oklahoma State Football” series on ESPN+. For as long as the 2020 Cowboys are playing football, a new episode will be released each Thursday.

In a screenshot taken from this week’s episode of the “Our Time: Oklahoma State Football” series on ESPN+, Mike Gundy addresses his players following last weekend’s scrimmage at Boone Pickens Stadium.