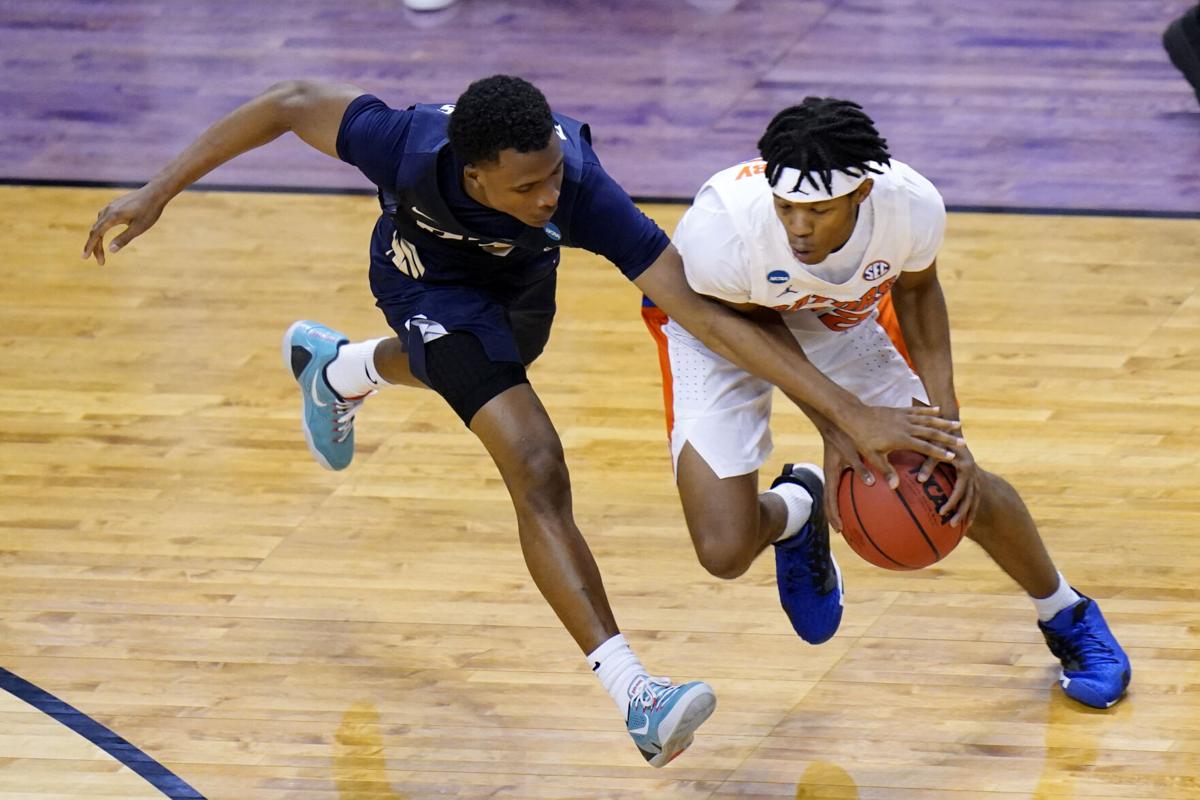 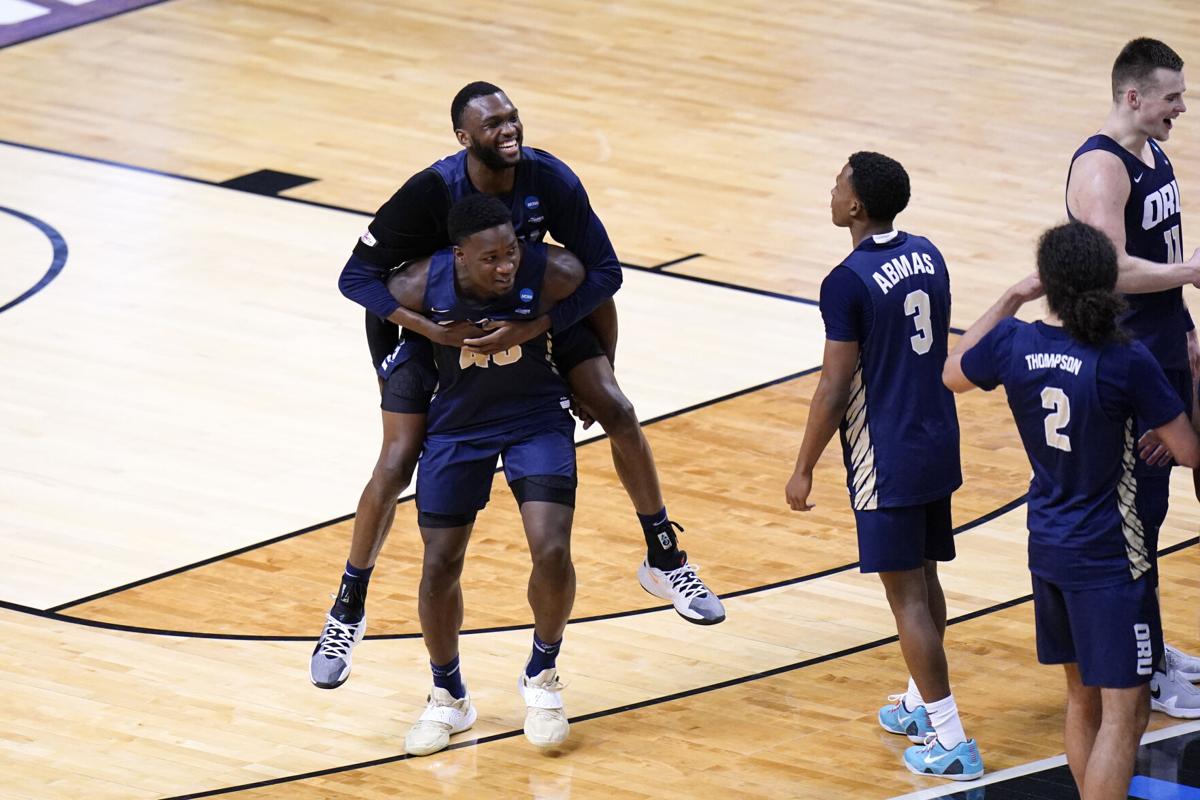 Oral Roberts players celebrate after defeating Florida in the second round of the NCAA Tournament last Sunday at Indiana Farmers Coliseum in Indianapolis. ORU will play Arkansas Saturday in the Sweet Sixteen.

Bill Haisten: ORU gets another opportunity to shock the basketball world

INDIANAPOLIS — Standing between Oral Roberts and an unparalleled trip to the Elite Eight is a familiar opponent.

With a victory Saturday night against No. 3 seed Arkansas at Bankers Life Fieldhouse, the Golden Eagles would continue their Cinderella story and become the first 15th-seeded team to make it past the Sweet Sixteen.

“Everybody is surprised by us winning, but we didn’t come here just to be here,” point guard Max Abmas said. “We came here to win games. We go into every game confident just because we know the work that we’ve put in.”

After taking down Ohio State and Florida in the NCAA Tournament’s first two rounds, ORU plays the Razorbacks for a 14th time in program history and for a second time this season. Arkansas prevailed 87-76 when the teams met Dec. 20 in Fayetteville, rallying from a 12-point halftime deficit.

“We have great respect for Oral Roberts,” Arkansas coach Eric Musselman said. “They played us really well at our place. They’re a way better team (than they were then) and we’re a drastically different team.

“When there’s 16 teams left, you have to understand that every team is capable. Oral Roberts has beaten two great basketball teams.”

Carrying the Golden Eagles to the pair of upsets was Abmas and forward Kevin Obanor, the nation’s top-scoring duo. Abmas leads the country in scoring (24.2 points per game) and Obanor has the highest average of any player in NCAA Tournament games (29 points per game).

“They present a lot of problems,” Musselman said. “They have shooting. They’re good cutters and Abmas is so difficult to keep in front of you and then you add in the deep long-range shot-making ability. Those two players are playing as well as any combo teammates in the tournament right now.”

Abmas was limited by foul trouble in the first meeting and scored 11 points, his lowest production against a Division I opponent. His role has changed since nonconference play, transitioning to more of a true point guard and taking on a bigger scoring load since R.J. Glasper, who spent his first year at Arkansas, went down with a torn ACL seven weeks ago.

“We’re a much different team than we were earlier this year simply because Max is much more ball-dominant than he was previously,” ORU coach Paul Mills said. “Once our third-leading scorer went down ... we told Max that he would have to be more assertive. We had to figure where these other 11 shots were coming from.”

For a team that lost five nonconference games to teams that wound up in the NCAA Tournament and weathered another handful of defeats in the Summit League, everything has clicked during the seven-game win streak.

“Going into the conference tournament, we knew we had to be playing our best basketball going into that and then carrying that momentum over into the NCAA Tournament,” Abmas said. “I think we’ve improved a whole lot defensively, and then over time the chemistry has just grown and become even stronger. I think we’re a much better team.”

Oral Roberts will host a watch party Saturday night at the Mabee Center for the Sweet Sixteen game against Arkansas.

The watch party is open to the public and doors open at 5:30 p.m. in advance of the 6:25 p.m. tip time. Everyone is asked to enter through the north doors of the arena.

Fans and alumni attending the watch party can sit in the gold and blue sections of the arena while ORU students will be seated in chairs on the arena floor.

COVID-19 policies will be in effect, such as socially distanced seating and a mask requirement for all in attendance.

After ORU's NCAA Tournament victory over Florida, an unidentified donor asked a million-dollar question: “What can I do to help the basketball program?”

ORU's next athletic director, Tim Johnson: 'This is kind of all I've wanted to do and all I've worked toward'

A 39-year-old originally from Bartlesville, Johnson has spent his career methodically climbing the industry ladder, earning the trust of key figures and being handed a significant amount of responsibility at each stop.

'He's a blessing and we're going to miss him': ORU AD to move into emeritus role

Mike Carter was honored Monday afternoon with a formal recognition of his retirement as athletic director, and he was presented with a framed declaration of the new athletic center named in his honor -- a transformational project that will be built next to the Mabee Center on the heels of the basketball team's improbable March Madness run.

Within two weeks, the Golden Eagle stars should be informed where they likely would be slotted if they were to make themselves eligible for the 2021 NBA draft.

"His talent was evident the first time we watched him play," coach Paul Mills said. "Trey is an elite-level shooter."

Bill Haisten: The challenge for ORU – to capitalize on this momentum and sell more tickets

There’s got to be a way to inspire former ORU ticket-buyers to go back to the Mabee Center on a regular basis.

In high school, Phipps scored more than 1,700 points and made 337 career 3-pointers, shooting 39% from beyond the arc.

Before the ’73-74 season, Ken Trickey dismissed from the team 7-foot center David Vaughn, who averaged 19.2 points and 14.3 rebounds a year earlier.

Losing a talent like Vaughn seemed devastating at the time for a team with national title aspirations. But ORU, with “The Flying Titan” Eddie Woods often controlling the boards, didn’t appear to miss Vaughn.

Bill Haisten: As ORU’s Kevin Obanor flourished in Indy, his car was stolen at the Mabee Center

Police and security personnel are attempting to identify the thief — or thieves — while reviewing a 15-day chunk of surveillance video.

Oral Roberts players celebrate after defeating Florida in the second round of the NCAA Tournament last Sunday at Indiana Farmers Coliseum in Indianapolis. ORU will play Arkansas Saturday in the Sweet Sixteen.