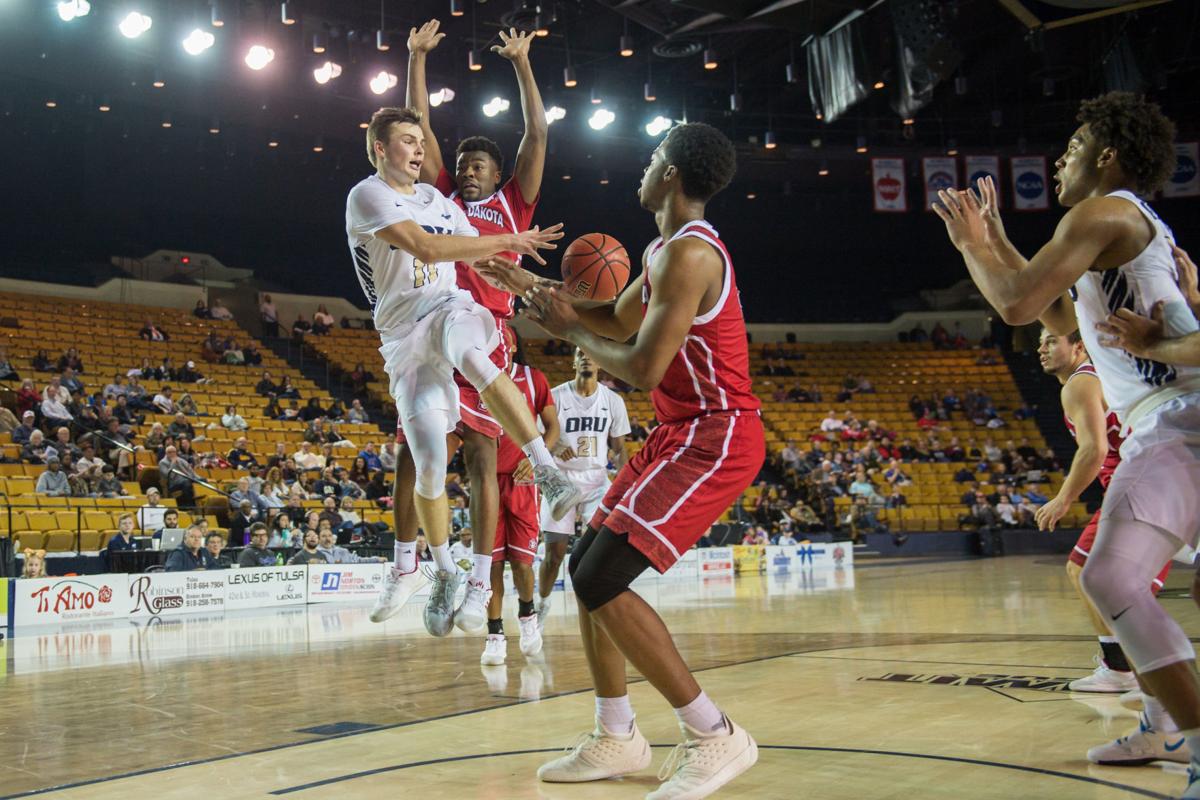 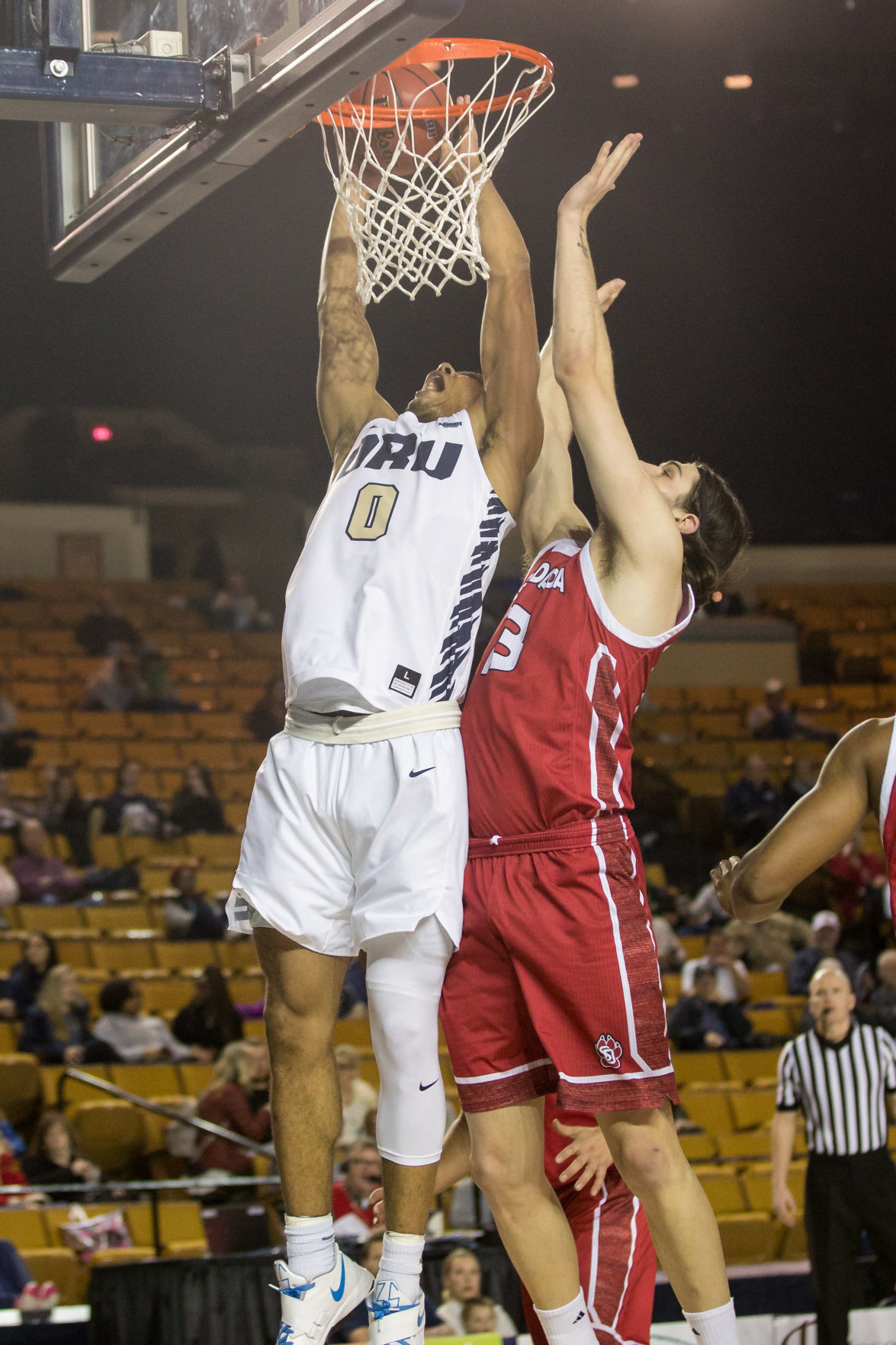 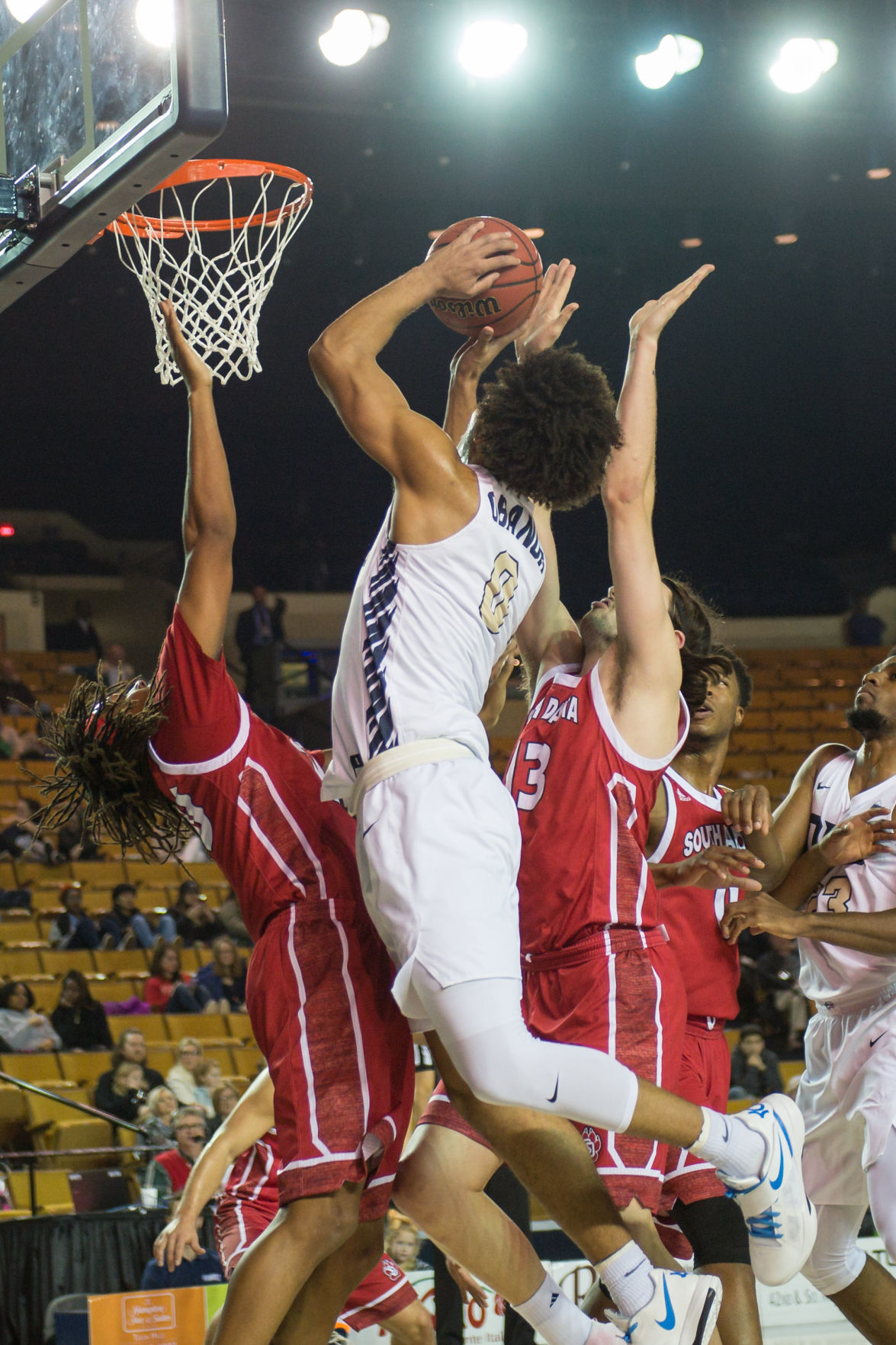 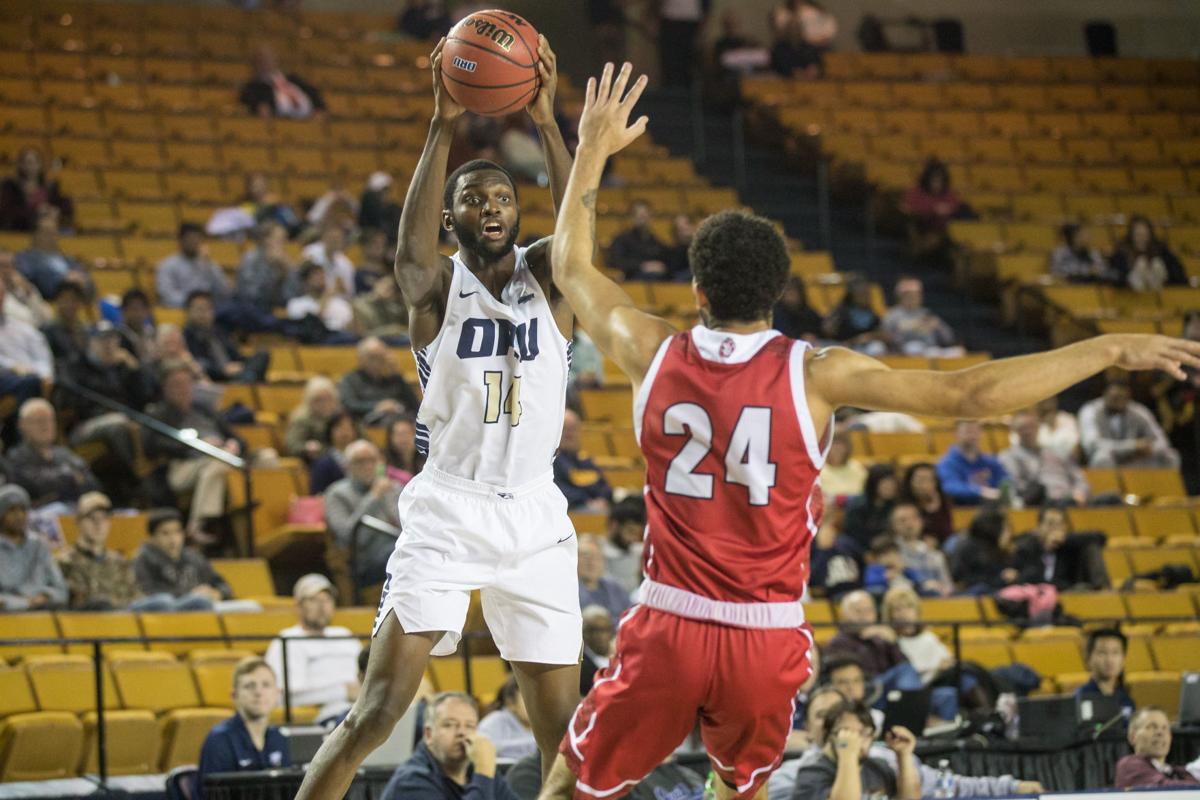 Oral Roberts forward DeShang Weaver (left) was 8-for-11 from the field, including 5-for-7 from 3-point range, and scored 24 points in the Golden Eagles’ 77-74 victory over South Dakota at the Mabee Center on Thursday. BRETT ROJO/for the Tulsa World 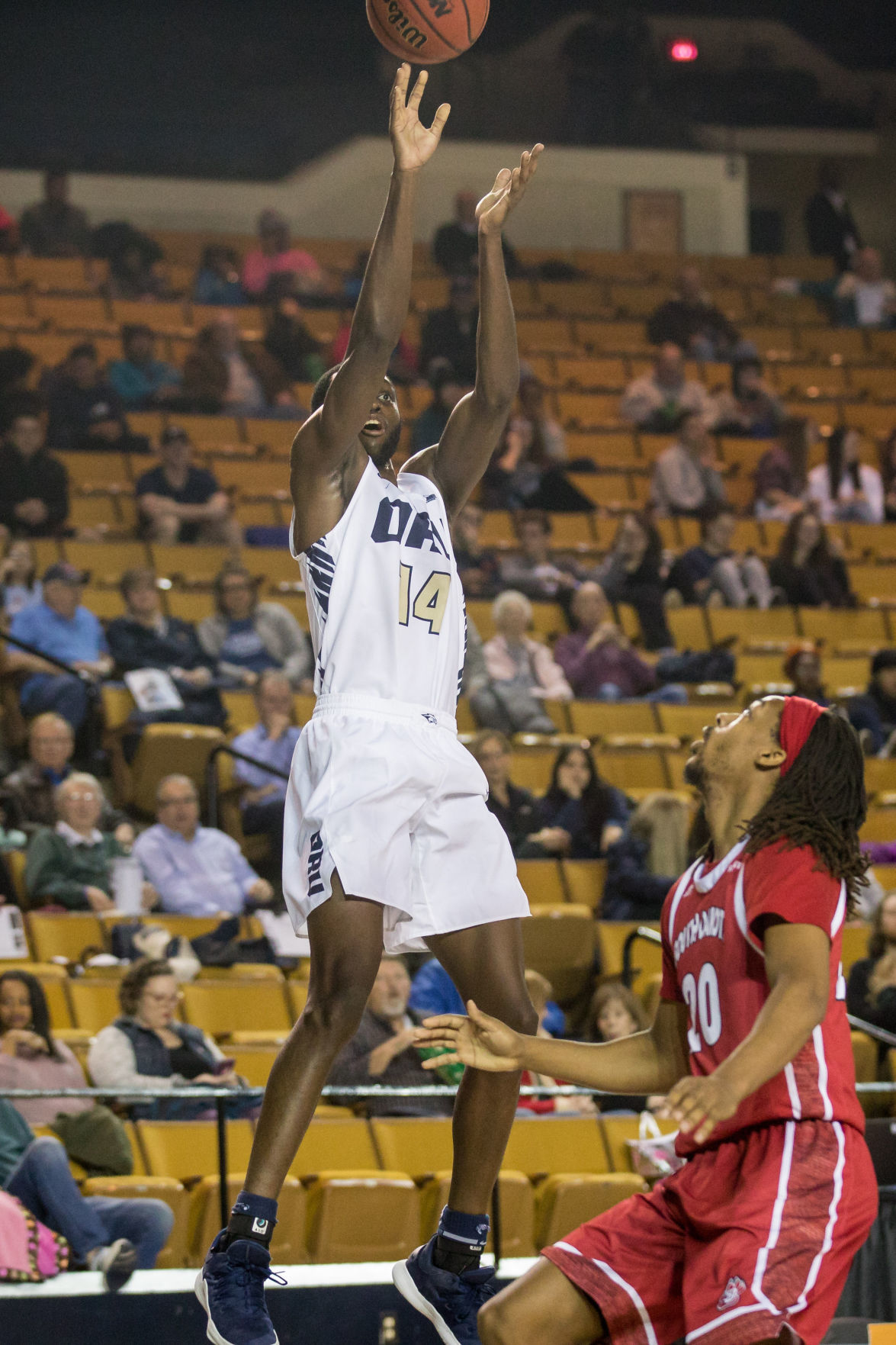 Oral Roberts’ Kevin Obanor and DeShang Weaver had just finished fielding questions at the Mabee Center on Thursday night. That’s when Weaver stood up and delivered a message to no one in particular.

The two freshmen threw the Golden Eagles on their back and secured a 77-74 victory over South Dakota amid a Summit League game that featured everything outside of a benches-clearing brawl.

The teams combined for 42 fouls — somehow only South Dakota’s Matt Johns was the only player to foul out — and for the second night in a row, an NCAA Division I coach was ejected in the Tulsa area. With 1:42 left in the first half, South Dakota coach Todd Lee was assessed two technical fouls and ejected.

Neither Lee nor the Summit League officiating crew was made available for comment after the game.

All Lee’s dismissal did was inject life into an ORU team that trailed by as many as seven in the half. Obanor made 5-of-6 free throws once Lee left the court, and the Golden Eagles, in an instant, found themselves up 35-28 and eventually 39-32 at halftime.

“Because of the time he puts in the gym, I trust him,” ORU coach Paul Mills said of Obanor, who added 11 rebounds for his second double-double. “You trust guys when you know they’re working.”

Weaver’s jump shot also was working for the Golden Eagles (8-13, 4-2 Summit League). The lanky 6-foot-8 forward from Houston scored a career-high 24 points, none bigger than his driving layup with 2:59 left that gave ORU a 73-67 advantage.

“I wasn’t really thinking about scoring late,” said Weaver, who connected on 8-of-11 field goals, including 5-of-7 from beyond the 3-point arc.

“In the last minutes of the game, I was just thinking we needed to score, whether it was Kevin, me or Carlos (Jurgens), since he was able to get to the rim so many times.”

Jurgens was ORU’s only other scorer in double figures with 14 points.

The trio had to pick up the scoring when ORU’s leading scorer, Emmanuel Nzekwesi, left with an ankle injury with 3:25 remaining in the first half. Nzekwesi missed all five of his shots and was held scoreless for the first time since December 2016.

“That was a big loss for us,” Obanor said. “I feel like all the freshmen and all the people on the bench really stepped up.”

Despite trailing by 15 early in the second half, South Dakota (8-10, 2-3) pulled to within three on three occasions inside the final 90 seconds. Twice Obanor sank two free throws to boost ORU’s lead back to five, but a missed layup by Jurgens gave South Dakota life with 30 seconds remaining.

The Coyotes’ Tyler Peterson, who finished with 20 points, missed on a running jumper with 15 seconds left, and after a missed free throw by Jurgens, South Dakota’s Stanley Umude missed a game-tying 3-point attempt with 5 seconds left.

The final rebound found its way to Obanor.

“Those four freshmen late, along with Kerwin (Smith), really did a good job, specifically because they hadn’t been in that situation a whole lot,” Mills said. “I thought they handled it well, and I thought DJ (Weaver) made some big plays.”

Oral Roberts forward DeShang Weaver (left) was 8-for-11 from the field, including 5-for-7 from 3-point range, and scored 24 points in the Golden Eagles’ 77-74 victory over South Dakota at the Mabee Center on Thursday. BRETT ROJO/for the Tulsa World