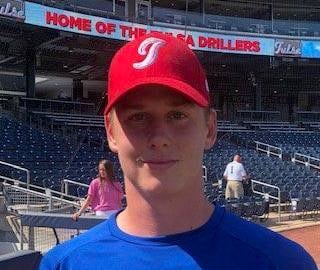 Matt Merrill after pitching for the Tulsa Drillers in a 4-2 win over the Victoria Generals on Sunday at ONEOK Field. BARRY LEWIS/Tulsa World 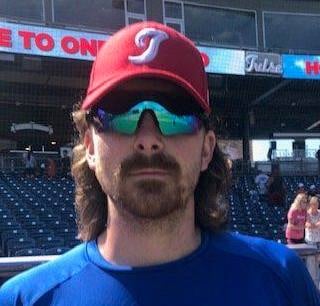 Colton Williams after pitching three perfect innings for the Tulsa Drillers in a 4-2 win over the Victoria Generals on Sunday at ONEOK Field. BARRY LEWIS/Tulsa World

Tulsa resident Matt Merrill is a rarity in the Texas Collegiate League, which is a launching pad for pro careers.

Merrill, who joined the TCL’s Tulsa Drillers on July 15, already has played pro baseball — and hopes to again. He pitched in six games in the Houston Astros organization in 2017 after being drafted that year.

“It’s very unique,” Merrill said about his situation. “It’s almost unheard of, but it is what it is, and I’m ready to get back (to pro baseball). Absolutely, I learned a lot from that first round (in pro baseball). I’ve grown a lot as a person since then and college has been really good for me. After college I feel like I’m definitely ready to go back and I can’t wait.

“That’s something I look forward to. Hopefully, if things keep going good out here, we’ll see what happens.”

The 6-foot-4 Merrill, who is 22 and pitched in high school for NOAH, is 15-3 over the past two seasons with the University of Science and Arts of Oklahoma after the NAIA reinstated his amateur status following his Astros release in 2018. In three games with the Drillers, he has allowed two hits and struck out 16 in 7 ⅔ innings.

On Sunday afternoon, Merrill and his USAO teammate Colton Williams each pitched three innings as they combined with West Virginia’s Adam Tulloch on a three-hitter to help the Drillers defeat the Victoria Generals 4-2 at ONEOK Field.

The USAO standouts, who are staying with Merrill’s family this summer, joined the Drillers around the same time the team lost two top pitching prospects from the University of Florida — Hunter Barco and Brandon Sproat.

“Merrill and Williams have given us a big boost,” Drillers manager Tom Holliday said. “They are mature kids, they throw strikes and compete hard. In this game it doesn’t matter where you’re from. It really doesn’t. If anybody gets anything about what this summer college baseball is, you can be from anywhere.”

Merrill and Williams often pitch on the same day as starters for USAO in doubleheaders, so Sunday was a different experience for them being in the same game. Williams described it as “pretty cool, we complement each other well.”

Williams, a 6-foot-5 lefty who was the NAIA pitcher of the year in 2019 and 21-0 over the past two seasons at USAO, started and retired all nine batters he faced with five strikeouts before he was followed by Merrill.

Williams, 24, has not allowed a baserunner in 6 ⅔ innings over three appearances for Tulsa.

So how did the lefty stay so sharp during the four months between the early end to his college season due to the pandemic and joining the Drillers?

“I just threw once a week and stayed in good shape,” Williams said. “I also worked at the same time and tried to balance everything. I work at a ranch in Carmine, Texas. I work with animals sometimes, build some stuff, we’re going to be working on a little bunkhouse here pretty soon.”

But that’s a week or two away as the Drillers (14-9) head into their final six regular-season games — all in Amarillo — looking for a playoff berth. Tulsa won its seventh game in a row that it has actually played despite only six hits.

“We were flat, maybe it was the day game after the night game, but we were rested going into this series, no reason for that,” Holliday said. “We didn’t have a good offensive day, but the pitching kept us in the game again.”

How can the Carolina Panthers stay hot?

What's the cause for Sam Darnold's early success?

What's the cause for Sam Darnold's early success?

Cabbiness, the walk-on from Norman North, made a crucial catch late in OSU's 21-20 win over Boise State on Saturday.

Once thought to be an odd fit, the Philly-born, Ivy League-educated Knowles now thrives as OSU's fourth-year defensive coordinator

Thoughts on a non-existent passing game, a finally stable offensive line and a Cowboys defense that proved it can bounce back.

Guerin Emig: One player, one problem, one preposterous prediction and one pick for OSU-Boise State

Matt Merrill after pitching for the Tulsa Drillers in a 4-2 win over the Victoria Generals on Sunday at ONEOK Field. BARRY LEWIS/Tulsa World

Colton Williams after pitching three perfect innings for the Tulsa Drillers in a 4-2 win over the Victoria Generals on Sunday at ONEOK Field. BARRY LEWIS/Tulsa World