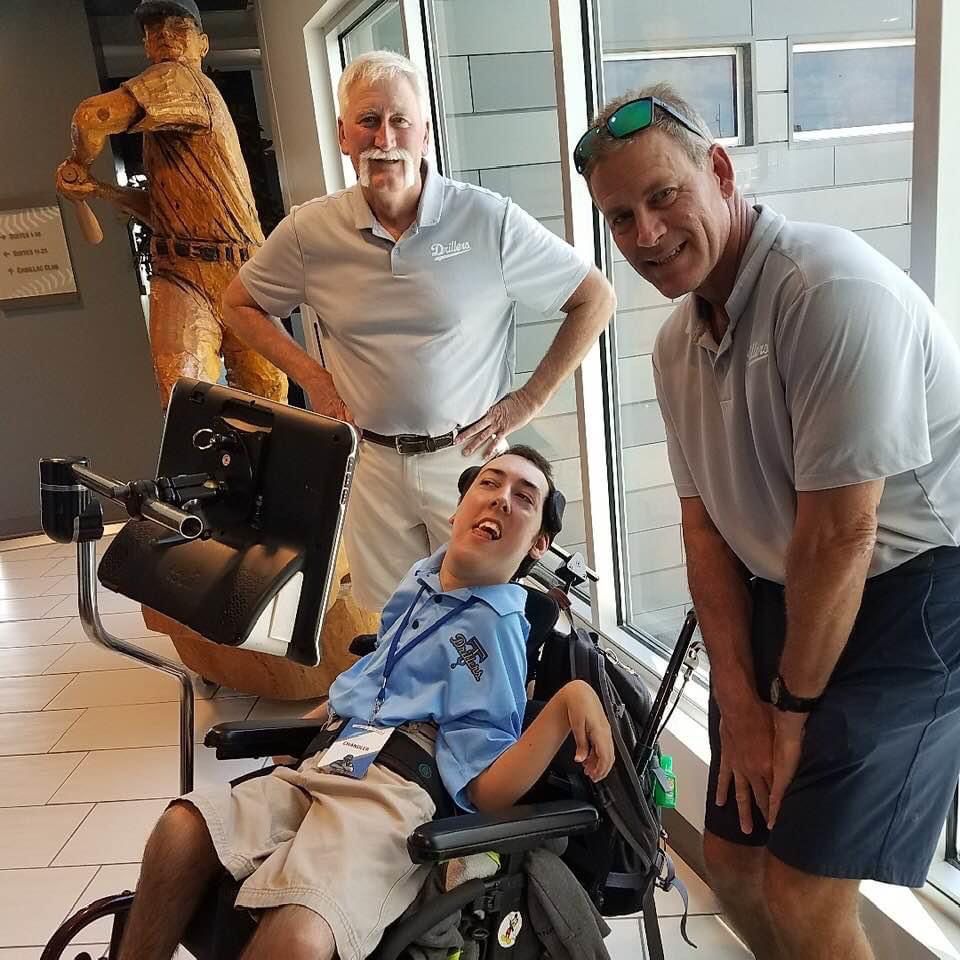 Tulsa Drillers owners Dale Hubbard (left) and Jeff Hubbard (right) with Drillers suite greeter Chandler DeBolt during a 2019 game at ONEOK Field. Chandler says he enjoys his job and the people he’s met while working at the stadium. COURTESY 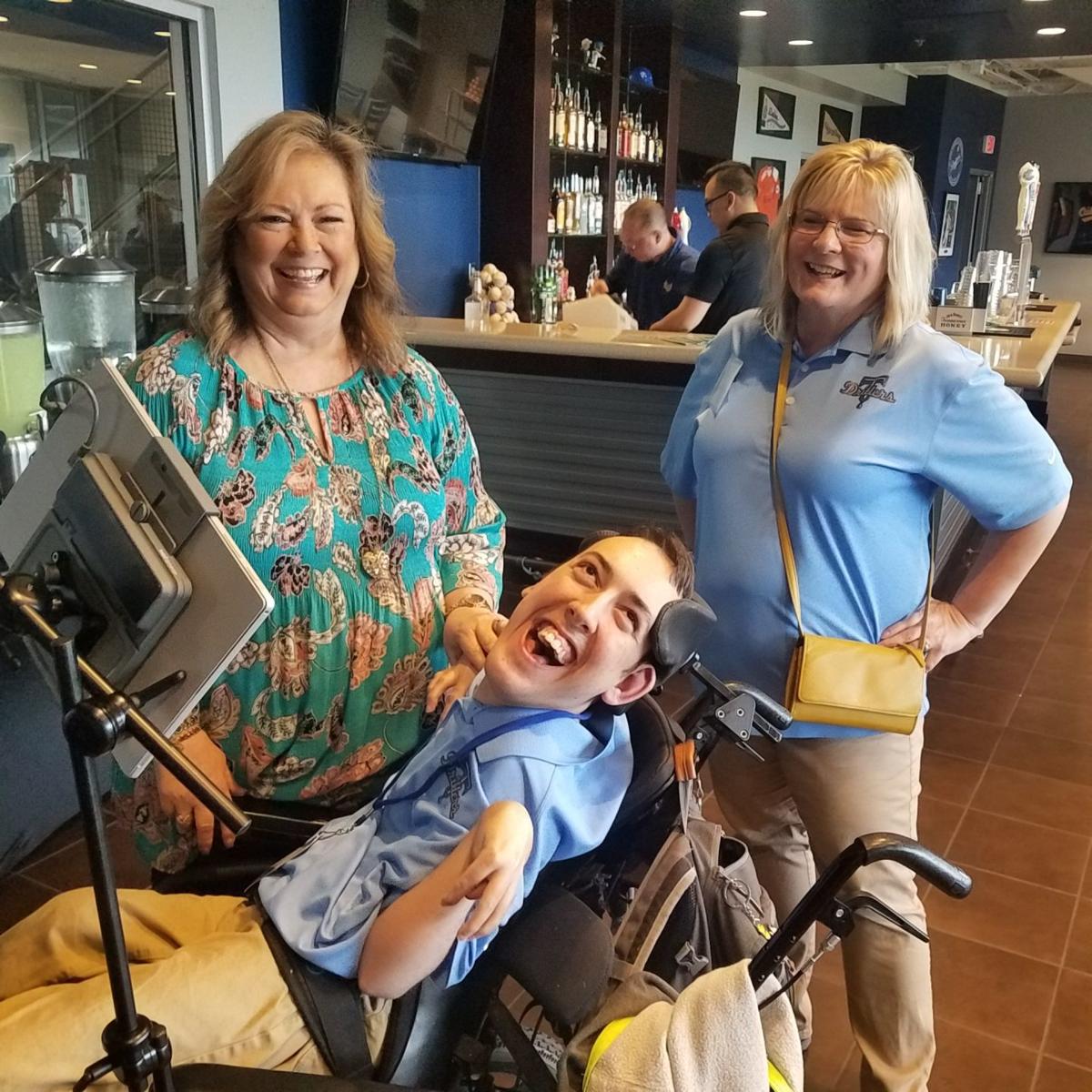 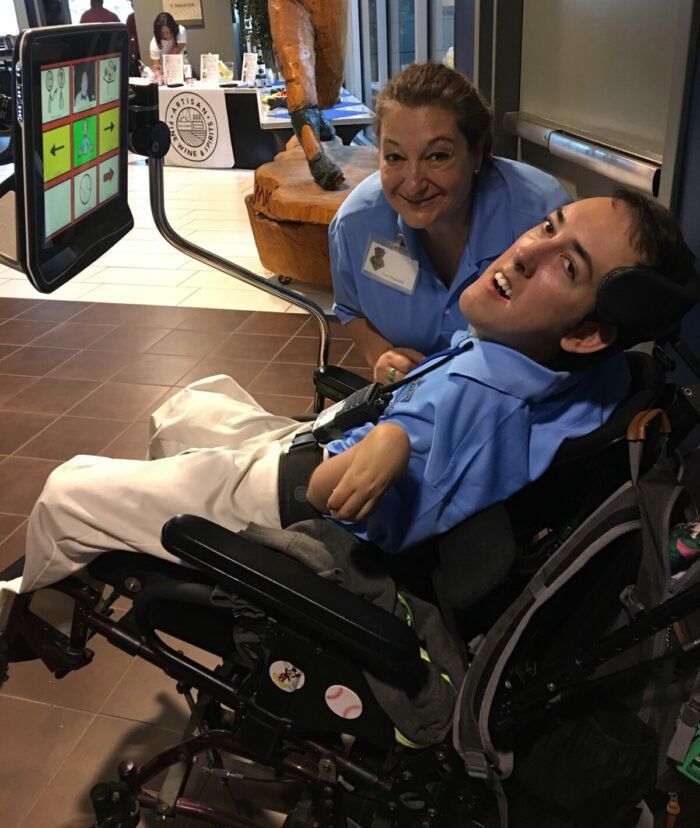 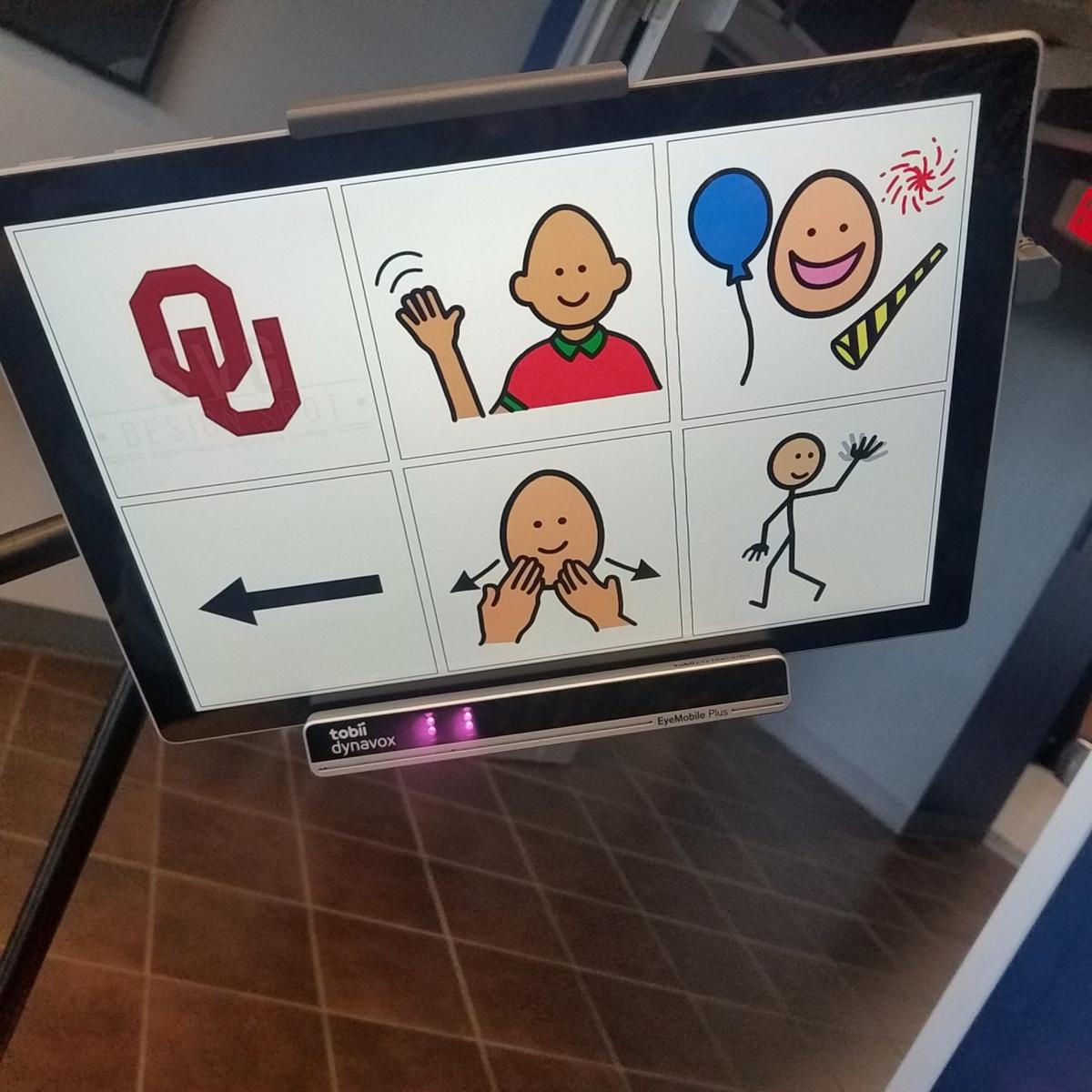 When the Tulsa Drillers resume play in two weeks, fans watching the games from the ONEOK Field’s suite level will be greeted for the second season by Chandler DeBolt.

While seated next to a Mickey Mantle statue, DeBolt uses an electronic voice to welcome fans after they exit the elevator and directs them to their suites.

DeBolt, a 24-year-old with cerebral palsy that confines him to a power wheelchair while working, has been a hit with Drillers fans. He works most of the home games with the assistance of a job coach.

“When he’s not there, people ask, “Where is Chandler?” Drillers corporate partnerships executive Cameron Gordon said. “The reaction has been extremely positive. He brings a breath of fresh air to our guests.”

Before being hired by the Drillers last year, DeBolt had been looking for his first job after graduating from Jenks High School with the help of Lisa Toth, the founder and CEO of Rise Staffing, which finds employment for people with intellectual and developmental disabilities.

“We were looking at another job for him, but he liked the Drillers and wanted to work for them so we changed course,” Toth said.

Toth had talked for two years with Drillers executive vice president/assistant general manager Jason George about the possibility of helping them fill a job vacancy at some point with one of her clients.

“They were looking for the right person to fit their needs,” Toth said.

DeBolt is a lifelong baseball fan and his personality that includes an infectious laugh and great sense of humor led Toth to believe he would be a good fit for the Drillers.

“When we came in for the interview, we could see that Chandler’s ability to do a job had already been thought out by the Drillers and they had a good fit for him,” said Lisa DeBolt, Chandler’s mother.

Chandler was hired by the time the interview was over.

“We were all surprised it happened so quickly, but everybody just jelled,” Toth said.

Toth gives a lot of credit to Eric Newendorp, who was Chandler’s supervisor last year and then-Drillers vice president of sales and analytics. Newendorp, who is now the president/general manager of Edmonton FC in the Canadian Premier League, has two sons with autism.

“Eric sees abilities instead of problems,” Toth said. “A lot of people turn away from our clients, but he was very open to hiring people with disabilities and already believed in it.”

Gordon wondered how fans would react to Chandler.

“At first I was a little hesitant, but he has worked out perfectly, he’s the perfect guy for the job,” Gordon said. “The reaction has been extremely positive.”

And what makes him the “perfect guy”?

“He’s happy, he’s our type of ambassador,” George said. “He loves what he does.”

For a typical 7 p.m. game, Chandler reports to the ballpark at 5:45 p.m. Sometimes he leaves at 9:15 p.m. or after the seventh inning, and sometimes he stays until fireworks start during those promotional nights. In the middle of his work night, he takes a break and will go down to the concourse to get a closer view of the game and talks with friends.

“Getting to see people, and be there for the games,” Chandler said is what he likes best about the job. “Lots of fun moments there. I especially like hearing the conversations on our employee walkie-talkies. People will call me and it’s fun.”

Chandler played T-ball when he was 4 or 5 years old and enjoys being part of a team again. While he saw the Drillers win a third consecutive Texas League North Division title last year, he also helped them win an award off the field as they were honored by the Oklahoma Association For Persons In Supported Employment as an employer of the year.

“We’re proud of it — it was in part because of our relationship with Chandler,” George said.

Gordon is hopeful that Chandler will be with the Drillers for a long time.

“We would love to have him here every year, we would like to have other organizations explore this option. He’s taught me a lot of things,” Gordon said. “This is the opportunity to bring awareness of those with disabilities.”

Lisa DeBolt said her son “thrives in a social environment” such as Drillers games.

“He enjoys telling people about his job and about the Drillers,” she said.

As most fans, Chandler has missed baseball — and his job — during the COVID-19 shutdown.

“It will be great to go back and work there again,” he said. “I have made some friends and always enjoy being at ONEOK Field.

“I like being part of the hospitality team, and working to make sure everyone enjoys themselves.”

Guerin Emig: 'Give your heart to the Lord because your butt is mine' -- Memories of Nolan Richardson's famed TU takeover from a player who lived it

Lifelong Tulsan Ed Lindblad reflects on his contribution to the Hurricane's 1981 NIT champs, the impact of his coach and teammates and why it resonates so strongly

Oklahoma's movement in the AP Top 25 poll comes after winning eight of its past nine games.

The pandemic was among many complications in Hurricane's long, winding road to 2020's completion

Tulsa Drillers owners Dale Hubbard (left) and Jeff Hubbard (right) with Drillers suite greeter Chandler DeBolt during a 2019 game at ONEOK Field. Chandler says he enjoys his job and the people he’s met while working at the stadium. COURTESY