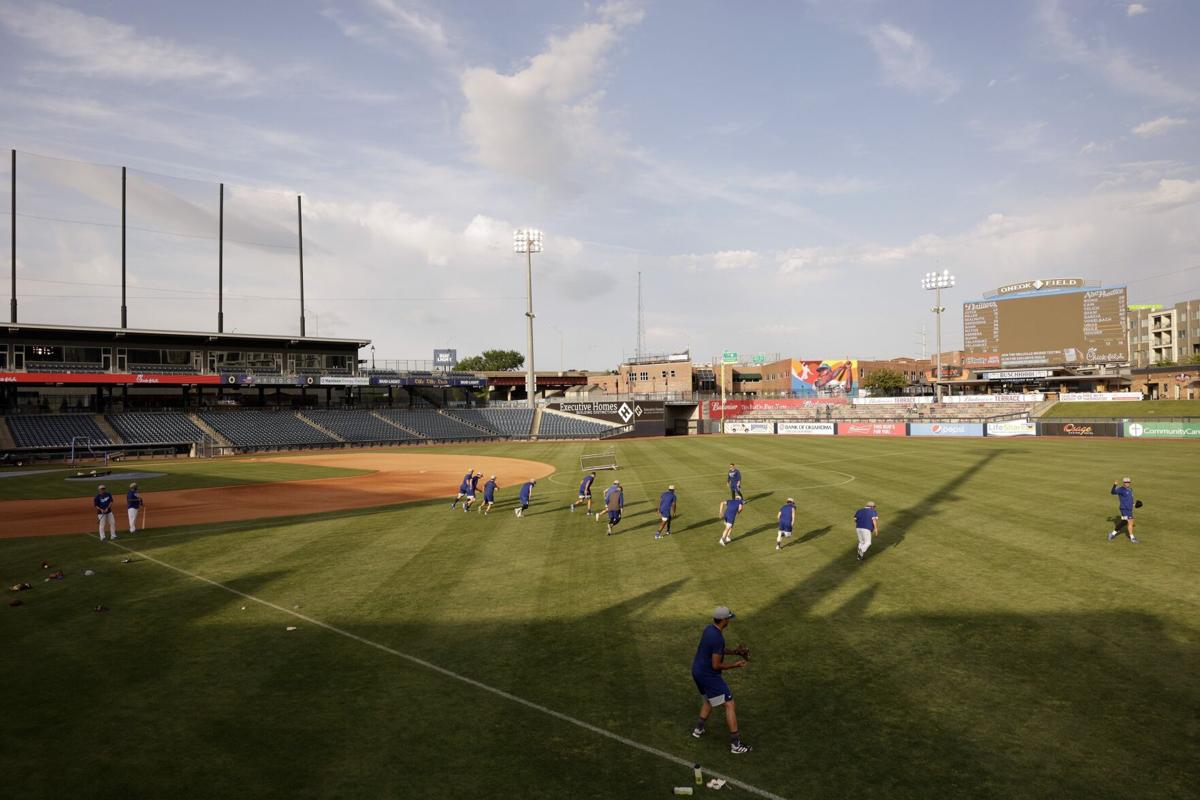 The Tulsa Drillers warm up during a practice session at ONEOK Field in downtown Tulsa on Monday evening. The Drillers open the season Tuesday at home. 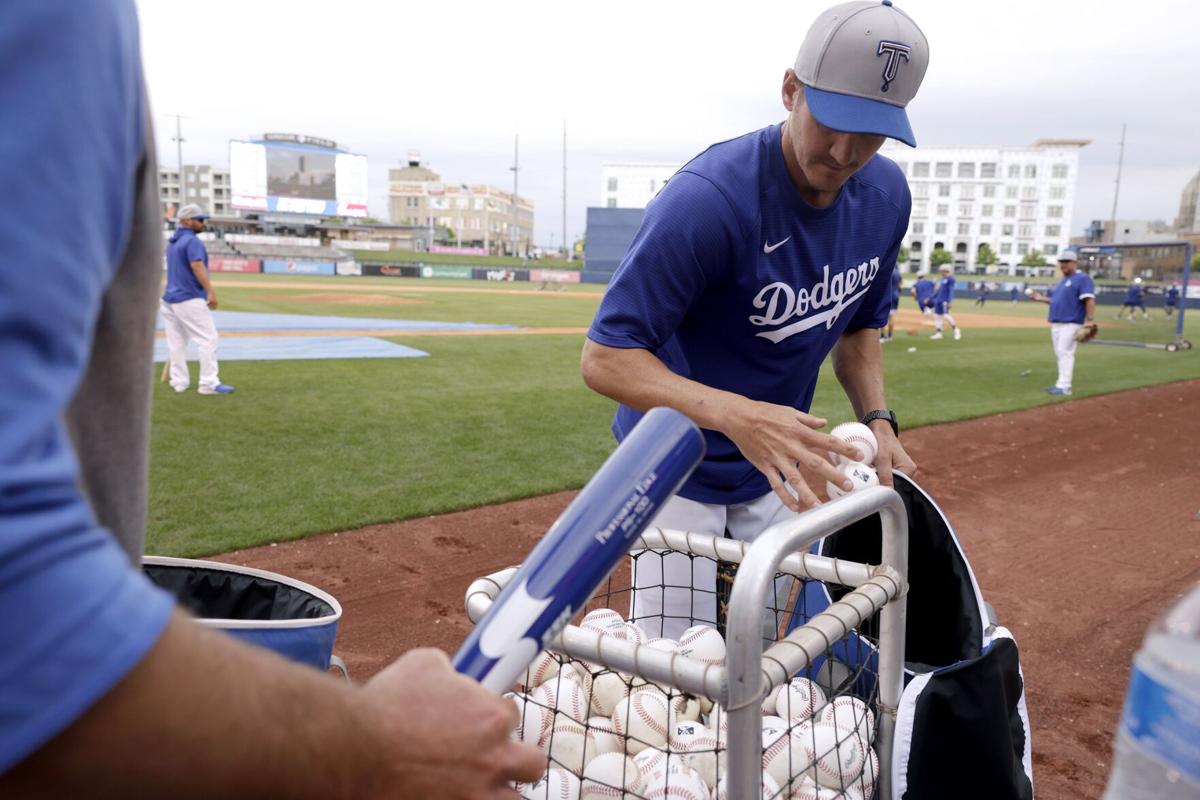 Tulsa Drillers hitting coach Brett Pill loads baseballs into a bag as he helps the team during a practice session at ONEOK Field in downtown Tulsa on Monday.

On Sunday and Monday nights, many of the 2021 Tulsa Drillers got their first look at ONEOK Field as the team held its first workouts since leaving spring training in Arizona.

Just as has been the case since the start of the pandemic, the Drillers players were on the field while the stands were empty.

That will change Tuesday night when the Drillers play in a game that counts as they open the Double-A Central season against the Amarillo Sod Poodles at 7:05 p.m. at ONEOK Field. Due to COVID protocols, attendance capacity will be limited to approximately 5,000 fans.

“We’ve been waiting almost a year-and-a-half for this moment,” Drillers second baseman Michael Busch said. “I think everybody is even more excited than ever.”

Busch, one of the parent Los Angeles Dodgers’ top prospects, described his reaction to when he arrived Saturday for the first time at ONEOK Field as “it was like that feeling of a little kid going to a big league game, honestly. I couldn’t be more excited to get inside the field and get inside the locker room.”

Drillers manager Scott Hennessey, who led Tulsa to three consecutive division titles and a pennant before the 2020 season was canceled, sees that playing in front of fans under the lights will be a bit of a transition initially for his players.

“Tomorrow night this place is going to be electric,” Hennessey said Monday. “The adrenaline and the rush they’re going to have, maybe a time or two through the order and first inning on the mound, it’s going to be a different feeling for them.”

Drillers right-hander Andre Jackson, who is on the Dodgers’ 40-man roster, is scheduled to start the second game of the six-game series Wednesday.

“I’m excited to be in front of fans, that’s huge, it adds to the game,” Jackson said.

Busch and Jackson are among the eight Drillers who are on Baseball America’s list of the Dodgers’ top-30 prospects. The Drillers’ roster that includes 28 active players and four others was announced Monday.

“It’s an exciting team,” Hennessey said. “Top to bottom, we’re really going to be able to pitch it. We’ve got a lot of power arms. We’re definitely going to be a different team offensively. I don’t think we’ll hit as many home runs, but I think we’ll have a lot of guys hit between 10 and 15, guys with a lot of quality at-bats, less strikeouts, a lot of doubles.

“We definitely run better, we stole a lot of bases in spring training and we’ll be able to play defense. Every guy we run out there is a quality defender. It’s going to be a different Tulsa Driller team, maybe not play for the three-run homer like we have the last three years, but definitely more quality ABs and a bunch of doubles.“

“Basically we’re a brand-new team,” Hennessey said. “Our guys are ready to go.”

The attendance of 5,004 at ONEOK Field was the largest of all the Opening Night games in the minors on Tuesday.

Devin Mann and Jeren Kendall had four RBIs each for Tulsa. The only thing that slowed down the Drillers was a 14-minute drone delay in the third inning with Tulsa leading 8-0.

Sod Poodles rally to give Drillers another Sunday afternoon nightmare

The Sod Poodles entered the eighth inning with a three-run deficit, just as they did during the last previous Sunday afternoon game at ONEOK Field -- in the 2019 Texas League Championship Series finale.

The first 1,000 fans, ages 5 and up, entering through the Oil Derrick, Osage/Greenwood or First Base entrances Thursday will receive a bobblehead of the 2016 Driller who will be posing with his 2019 National League MVP Award.

Amarillo and Tulsa have combined for 13 homers in the first three games of the season.

The 2021 Drillers don't have any former major leaguers -- a change since they have been affiliated with the Los Angeles Dodgers.

Tulsa's Gerardo Carrillo and Ryan Pepiot each allowed only run in four innings during the weekend.

The Tulsa Drillers warm up during a practice session at ONEOK Field in downtown Tulsa on Monday evening. The Drillers open the season Tuesday at home.

Tulsa Drillers hitting coach Brett Pill loads baseballs into a bag as he helps the team during a practice session at ONEOK Field in downtown Tulsa on Monday.