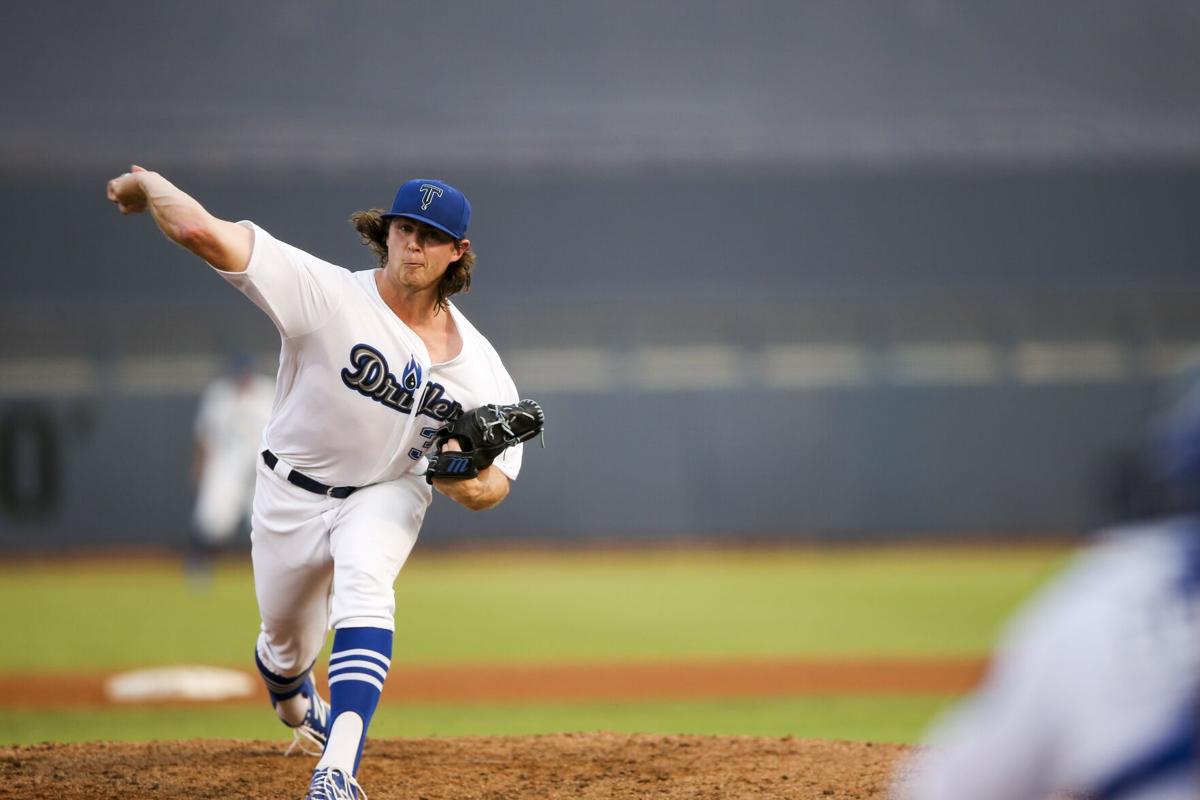 Tulsa’s Ryan Pepiot delivers a pitch during the Drillers’ win against the Northwest Arkansas Naturals on Wednesday at ONEOK Field. 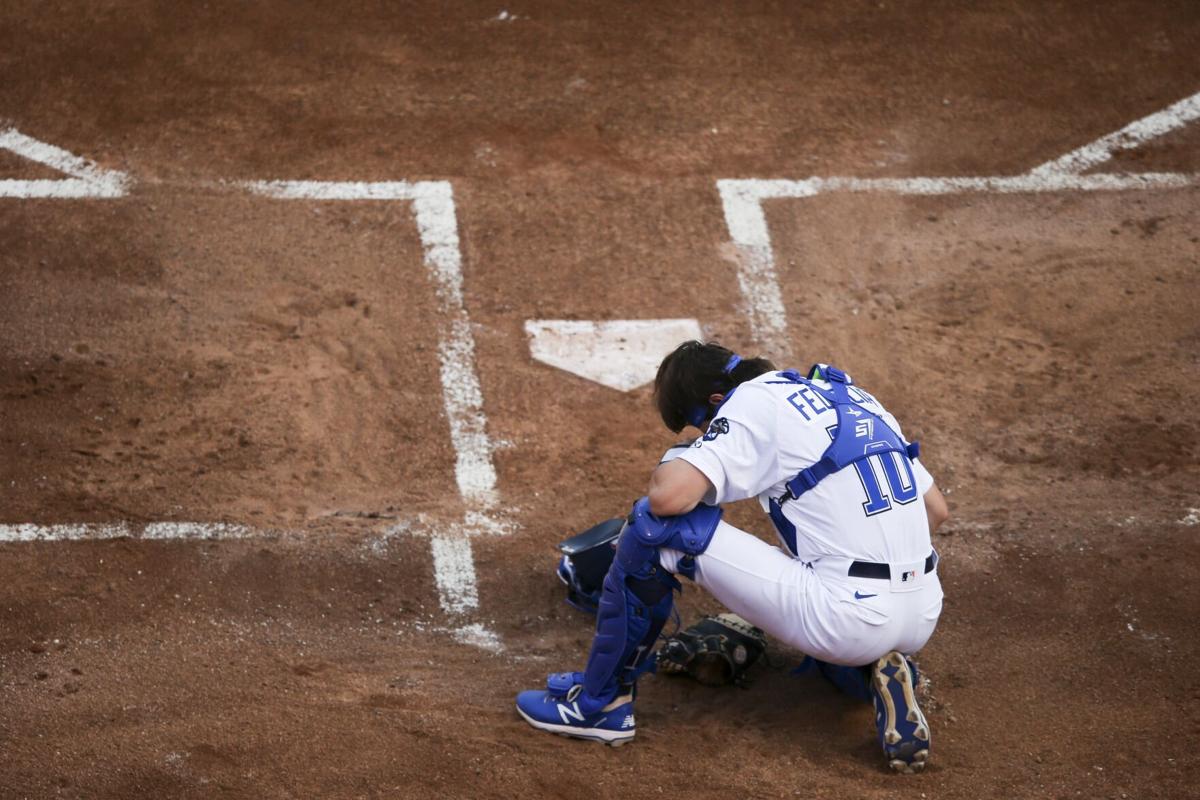 Tulsa catcher Hunter Feduccia takes a moment after being hit in the mask by a foul ball during the Drillers’ win against the Northwest Arkansas Naturals on Wednesday at ONEOK Field.

Slotting into the designated hitter spot for Tulsa’s Wednesday game against Northwest Arkansas, Daniel slapped the go-ahead RBI single in the bottom of the seventh inning. His seventh RBI of the season gave the Drillers (36-32) a 3-2 win over the Naturals (35-32) before a crowd of 5,163 at ONEOK Field.

Remarkably, Daniel has contributed despite playing in just nine of Tulsa’s 18 games this month. The former 31st round pick of the Chicago Cubs out of Jacksonville State has received just 58 at-bats this season — good for 13th on the team.

“I do what I can to help the team win ball games,” Daniel said. “That’s basically my role, so I’m not gonna hit too many home runs, so I’m here to put the bat on the ball and see what happens.”

The Naturals jumped ahead 2-0 early on Thursday thanks to catcher MJ Melendez’s (Royals’ No. 13 prospect) two-run home run — his Double A Central-leading 20th of the season — off Tulsa right hander Ryan Pepiot in the first inning. Beforehand, Pepiot hadn’t allowed an earned run in a home start since May 8 — his first appearance with Tulsa this season.

Pepiot (Dodgers’ No. 7 prospect) settled down to pitch 5 1/3 innings, surrendering three hits, one walk and striking out seven. Amid the no decision, Pepiot maintained his drastic home-road splits. He’s 3-0 with a sub-2.00 ERA at ONEOK this season but 0-4 with a 4.12 ERA outside the Drillers’ friendly confines.

“He’s gonna fill up the zone for us,” Daniel said. “He’s gonna battle for us. He’s a really good pitcher for us, so all of his stuff is really good and we know we’re gonna get a good outing when he’s on the mound.”

Tulsa struck back in the bottom of the second, when left fielder Devin Mann (Dodgers’ No. 21 prospect) walked and catcher Hunter Feduccia’s single moved him to third. Mann proceeded to score on a wild pitch from Northwest Arkansas left-hander Angel Zerpa, making the score 2-1.

Zerpa’s 0-2 record and 7.25 ERA entering Wednesday’s game was highly deceiving. Wild pitch aside, he dominated Tulsa for six innings, scattering four hits and two walks while striking out six, but couldn’t pick up his first win at Double A.

Right-hander Stephen Woods replaced Zerpa in the seventh inning, walking two before inducing a double play. Another walk made it first and third with two outs, before Tulsa tied the game.

“(I’m) just getting comfortable in the box, getting good pitches to hit,” Daniel said. “Mainly letting the game come to me and not trying to do too much really.”

Tulsa held on thanks to 2 1/3 scoreless innings of relief from right-hander Andrew Schwaab, who earned the pitching win. The Drillers also received 1 1/3 shutout innings from fellow righty Mark Washington, who notched his third save of the season. First pitch of the series’ next game is at 7:05 p.m. Thursday, and the Drillers now lead the season series 9-5 over Northwest Arkansas.

Moving forward, Tulsa can benefit from role-players like Daniel continuing to deliver after shipping off a big bat on Thursday. Outfielder Carlos Rincon, who led Tulsa with 48 RBIs and ranked third in that category in Double A Central, was traded by the parent organization Dodgers to the New York Mets for outfielder Billy McKinney.

“(Rincon) was a big part of our lineup,” Daniel said. “We’re gonna miss him a lot, but yeah, we’ve just gotta step up and just have good at-bats with runners in scoring position and put good swings on good pitches.”

Rincon is third in Double-A Central with 48 RBIs.

Tuesday's action starts with Northwest Arkansas leading 1-0 in the second inning of the June 6 suspended game.

Coolbaugh was a Drillers coach when he died from injuries suffered after he was struck by a foul ball during a game on July 22, 2007, at Arkansas.

Rincon has a RBI in the first inning of the Drillers' past three games.

Heasley pitched at ONEOK Field for the first time since a 2018 Bedlam game.

Four from last year's Drillers were selected in the recent Major League draft and others signed with major league teams as free agents.

Feduccia has been one of Tulsa's hottest hitters in July.

Both teams got strong outings from their starting pitcher Thursday, though both ended in no-decisions.

Tulsa’s Ryan Pepiot delivers a pitch during the Drillers’ win against the Northwest Arkansas Naturals on Wednesday at ONEOK Field.

Tulsa catcher Hunter Feduccia takes a moment after being hit in the mask by a foul ball during the Drillers’ win against the Northwest Arkansas Naturals on Wednesday at ONEOK Field.