Tony Holden (left) has a 30-year history of promoting boxing in Oklahoma and nationally. His 25-year-old son Bryce Holden now is considered a rising star as a promoter and event coordinator. 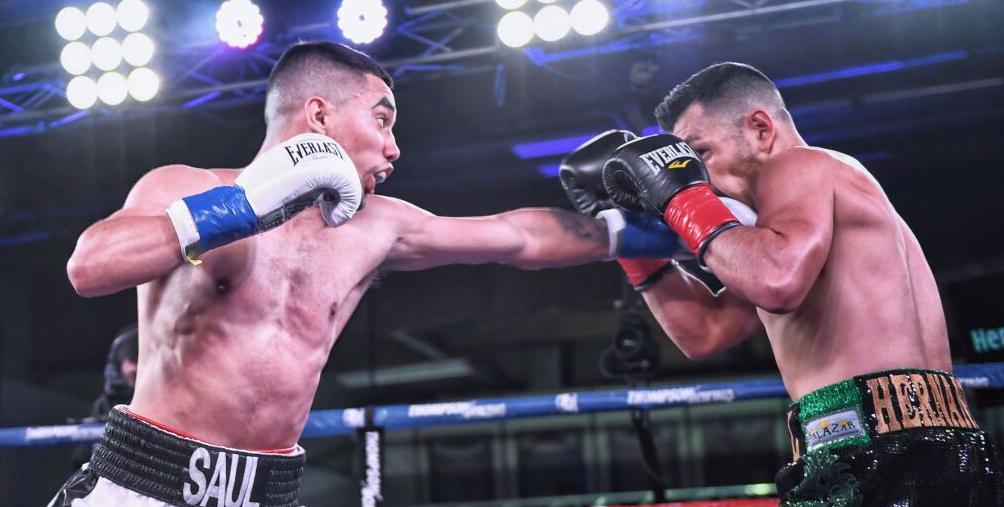 Saul Sanchez (left) is a 16-1 bantamweight boxer from Pacoima, California. On Friday in Broken Arrow’s Rose District, Sanchez is matched in the Showtime-televised, 10-round main event with Ja’Rico O’Quinn of Detroit.

By the age of 5, Bryce Holden was a fixture at significant boxing events all over the country.

As his father, Tony Holden, was the promoter of those events, Bryce became familiar with the fight game — and with everything required to conduct a successful show.

Today, at the age of 25, Bryce Holden is a partner in his dad’s company (downtown Tulsa-based Holden Productions) and viewed as a rising star in boxing promotions.

On Aug. 29, in Cleveland, Ohio, Bryce was a primary promoter in the Jake Paul-Tyron Woodley pay-per-view show.

Next for Holden Productions is a project closer to home — Friday’s Rose District outdoor boxing show in Broken Arrow. In an outdoor venue established at the intersection of Main and Broadway, the first bout is scheduled for 7 p.m.

Starting at 9:35, Showtime will televise the final three fights. The 10-round main event matches Jarico O’Quinn (14-0-1) of Detroit and Saul Sanchez (16-1) of Pacoima, California.

Holden Productions and the City of Broken Arrow are partners in staging outdoor boxing in Broken Arrow.

Lou DiBella is a New York promoter, a former HBO boxing executive and a longtime Tony Holden associate. If you remember the greatness of HBO’s boxing product during the ’90s, DiBella had a huge role in that.

“If Bryce wants to stay involved with promoting combat sports and sports in general — or other (non-sports events) — he’s got great potential,” DiBella said. “He’s bright. He works his (tail) off.

“I don’t want to sound like a 60-year-old guy I am, but I don’t see the same work ethic among young people these days that I used to see. I think Bryce does work incredibly hard, and his thinking is innovative.”

Brothers Jake and Logan Paul — each billed as a “YouTube sensation” — have marketed themselves to a level of big-event, big-money viability. In June, Logan Paul faced Floyd Mayweather in an eight-round exhibition.

During the pre-fight introductions of the fighters, a Showtime camera focused on Paul’s mother at ringside. Also getting television face time in that moment was Bryce Holden, who looked happy and relaxed as the eight-round main event was about to begin.

Looks can be deceiving, Bryce says: “I was excited that everything was happening as planned, but I wouldn’t say I was relaxed. It was in a state of, ‘What’s next? What might go wrong?’ It was a great experience, but I might have been in my seat 20 minutes all night. I was running around during the whole show.”

Tony Holden says he marveled at Bryce’s performance during several weeks of planning and during the night of the fight.

“Bryce essentially did the whole show,” Tony said. “I was worried about him. There was a great level of mental fatigue and stress. He did a great job with it, but the stress was tremendous.”

Bryce Holden is a former Jenks baseball and football athlete who in 2018 received a University of Tulsa degree in finance.

“His attention to detail and his people skills — that’s what sets Bryce apart from most other promoters,” Tony said. “The Jake Paul show was the most difficult show I’ve ever been involved with, but Bryce handled everything so beautifully. He has a calming effect on people.

“Usually, a lot of the people involved in a show hate the promoter. Nobody hates Bryce.”

• Rose District, Broken Arrow. An outdoor venue at the intersection of Main and Broadway.

• Showtime’s telecast of the final three fights begins at 9:35 p.m.

Jamelle Holieway led the Sooners to a 1985 national championship as a true freshman. What advice does he have for Caleb Williams?

“I don’t think we ever questioned that we can come through this within the existing framework that we were part of,” TU athletic director Rick Dickson said.

At the NFL level, Troy Aikman is defined as the most accomplished quarterback ever to have worn a Sooner uniform.

The Jayhawks had the Sooners pinned for much of the Big 12 game before rallying for a victory against KU.

No. 8 OSU at Iowa State: Cyclones send Cowboys to their first defeat of season

Cowboys go down as Cyclones make just one more play, the most critical of the inspiring game

Bill Haisten: UCO gets serious about a long-term run as the host of state championship football

With a $10 million stadium renovation, UCO makes a resounding statement that it wants a long-term relationship with Oklahoma high school football.

Tony Holden (left) has a 30-year history of promoting boxing in Oklahoma and nationally. His 25-year-old son Bryce Holden now is considered a rising star as a promoter and event coordinator.

Saul Sanchez (left) is a 16-1 bantamweight boxer from Pacoima, California. On Friday in Broken Arrow’s Rose District, Sanchez is matched in the Showtime-televised, 10-round main event with Ja’Rico O’Quinn of Detroit.