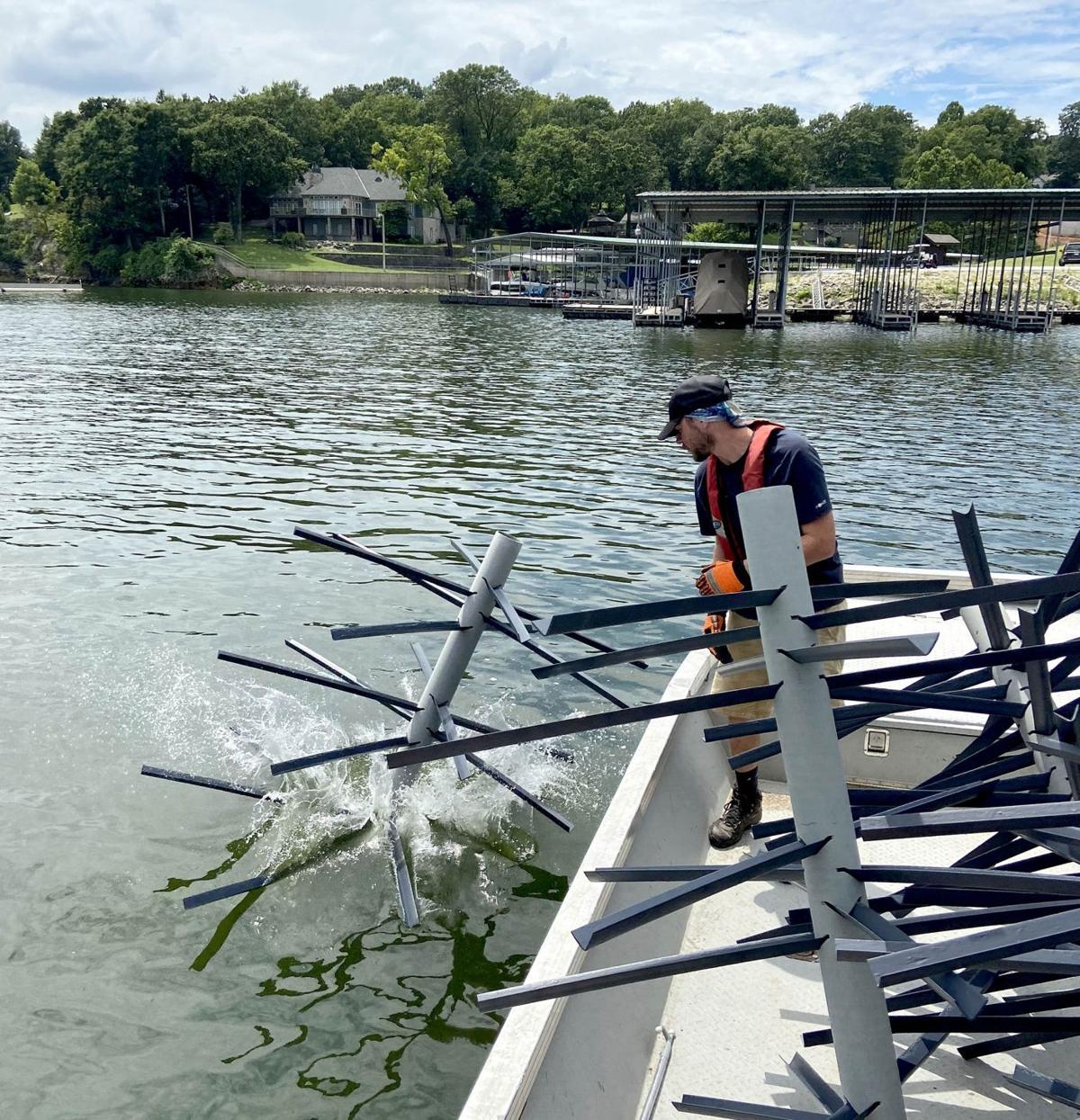 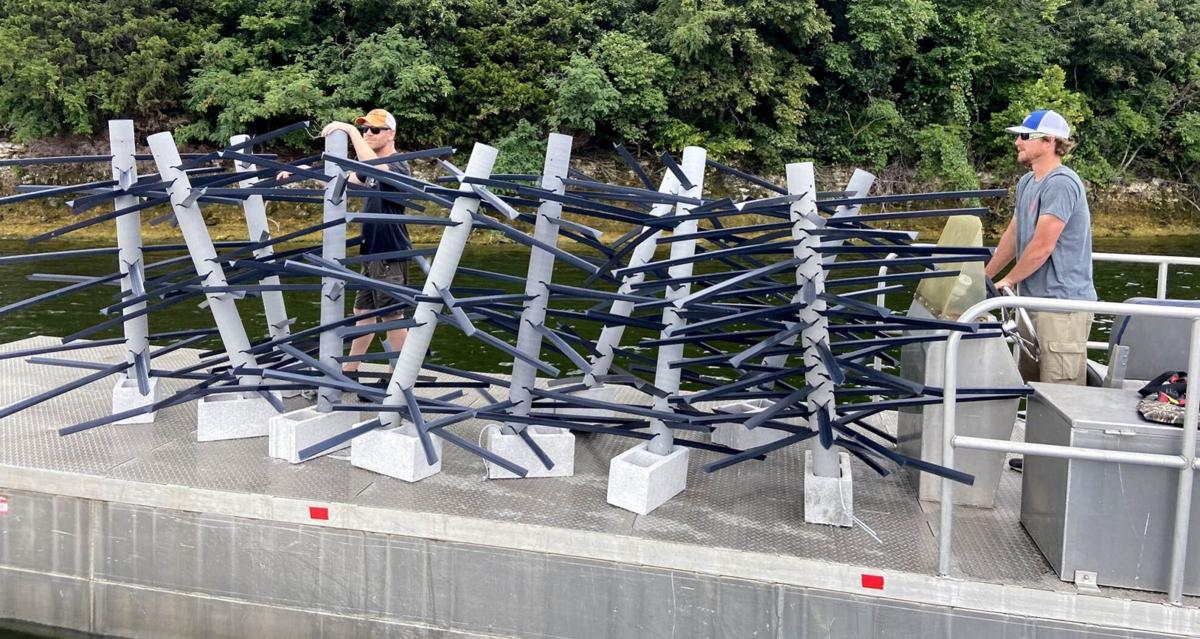 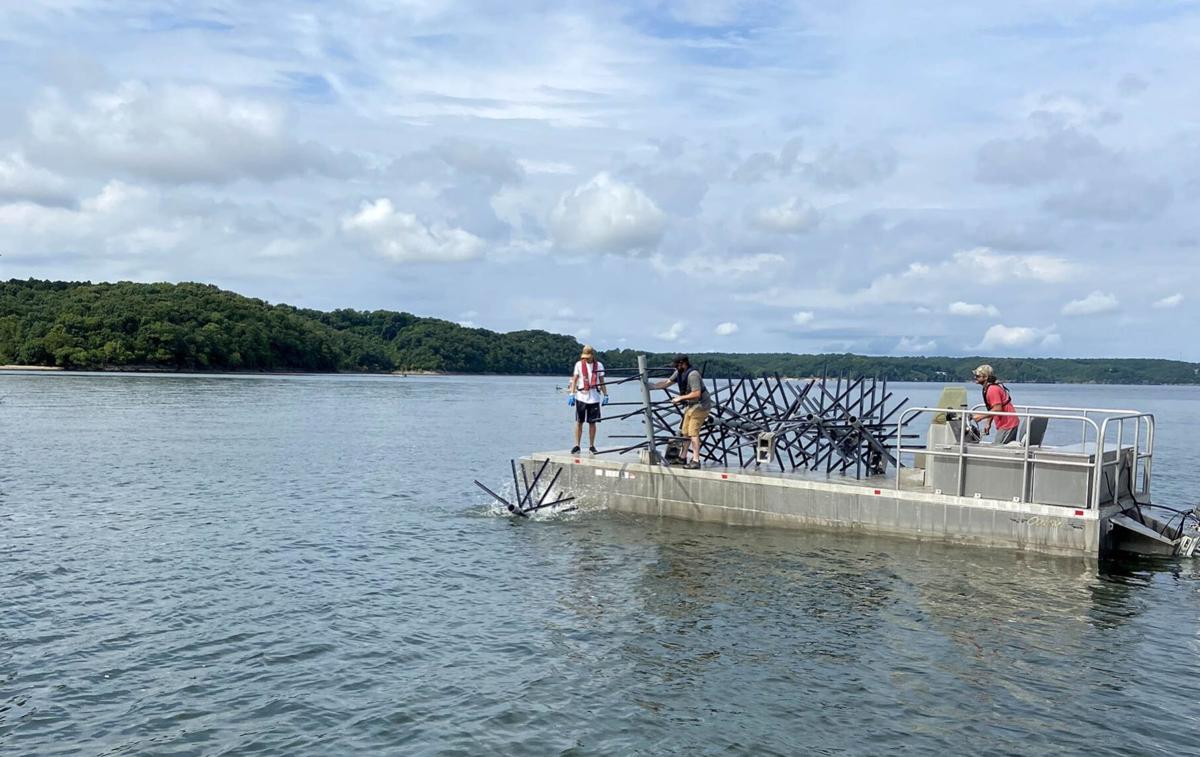 Honey Creek’s bass, crappie and catfish scored a major housing upgrade this week with an initial down payment of just $5,000 from the City of Grove.

The newly upgraded Fish Attractor Locator Map on the Oklahoma Department of Wildlife Conservation website now shows 11 new red dots on Honey Creek, where that initial contribution of $5,000 resulted in about 10 times that in fish habitat improvement work thanks to federal matching funds and contributions from Mossback fish habitats of Springdale, Arkansas, according to Josh Johnston, northeast region fisheries supervisor.

Unlike typical “spider blocks” made of concrete and round plastic pipe, Mossback creates its structures from recycled plastic that is textured and has flexible V-shaped cross-members on large vertical pipes. The flexible “limbs” are designed to collect silt, but not snag lures, and to promote growth of moss and other vegetation.

Mossback was enthusiastic about the effort, Johnston said.

“They delivered all the materials and three guys were here all day, including the owner, and they helped us assemble the blocks and put everything out,” he said.

Funding for the project began with the Grove City Council, which kicked in $5,000 for a habitat improvement project, he said.

The wildlife department was able to get a 3-to-1 match on the council’s contribution with Federal Aid in Sportfish Restoration Act funding, and Mossback not only offered materials at a 45% discount, but it also donated an additional 10 structures to place around the fishing dock at Honey Creek State Park, he said.

The 11 fish-attractor sites each are made up of 15 to 30 habitat structures and “cover quite a bit of area,” Johnston said. “I’m hoping they will attract and hold quite a few fish.”

“I had hoped for a project of about $22,000, but with everything considered it’s probably closer to about $50,000 in value,” Johnston said. “We hope to work with Mossback again and the city. This would not have happened without that initial contribution from Grove.”

Anglers can find the structures using the map at wildlifedepartment.com, which describes each site and gives GPS coordinates. Anglers with even the most basic depth finders should have no problem locating the new “brush piles,” Johnston said.