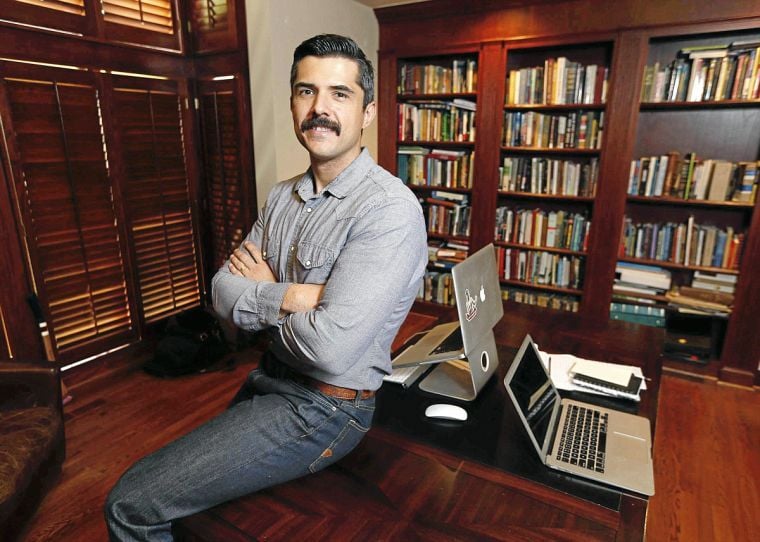 Brett McKay, the founder of The Art of Manliness blog, which has 6.6 million monthly visitors, runs the site from his home in Tulsa. MATT BARNARD/Tulsa World 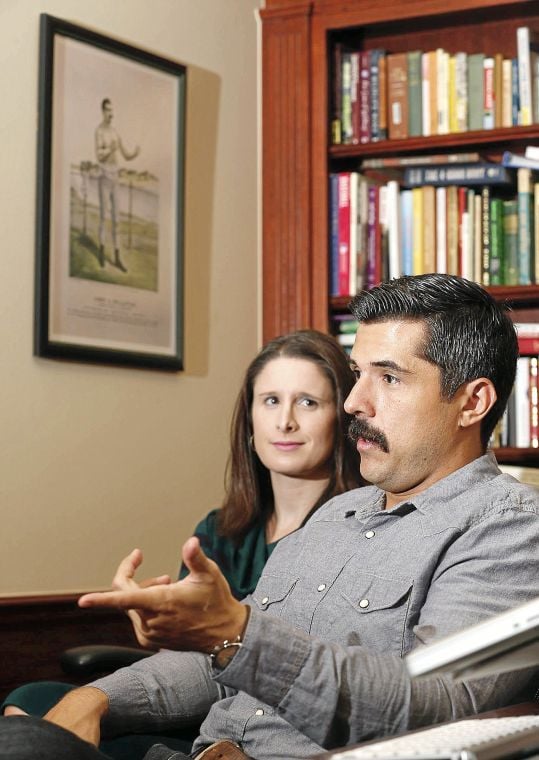 Brett McKay (right) and his wife Katie McKay, the operators of The Art of Manliness blog, talk about the site in their home office in Tulsa, Okla. on Friday, August 8, 2014. MATT BARNARD/Tulsa World 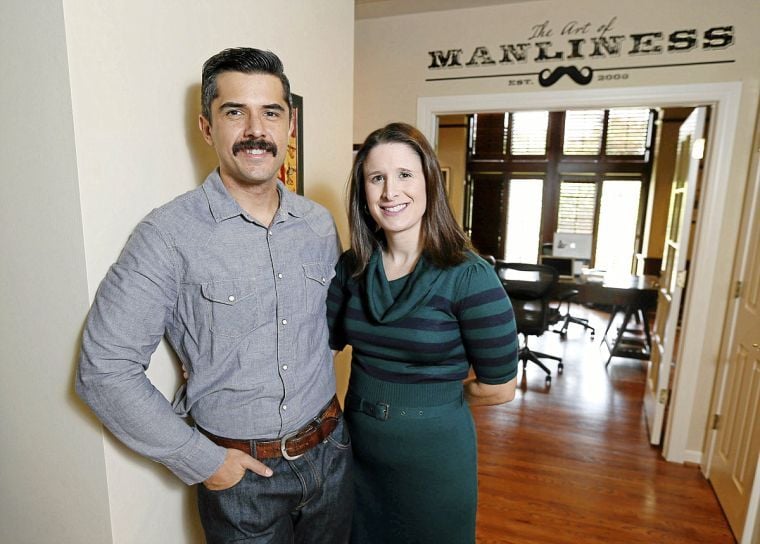 Brett McKay (left) and his wife Katie McKay run The Art of Manliness blog, a site that fills the void between nice forums and the big men's magazines like Esquire, AskMen and Men's Health. MATT BARNARD/Tulsa World 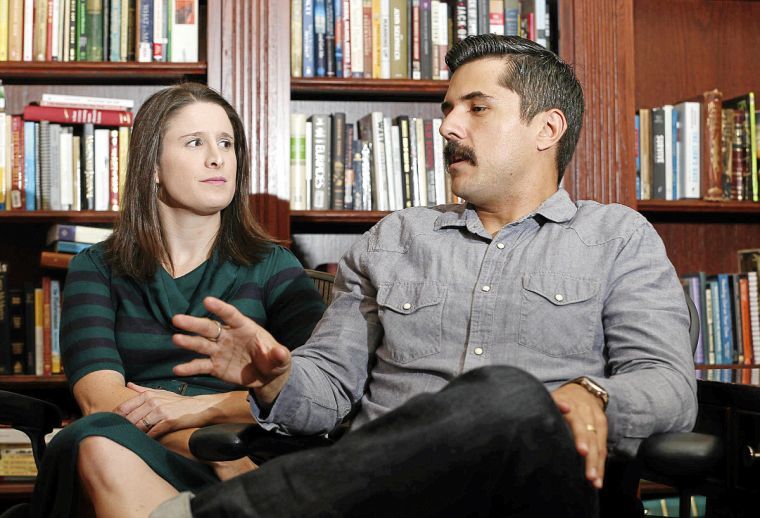 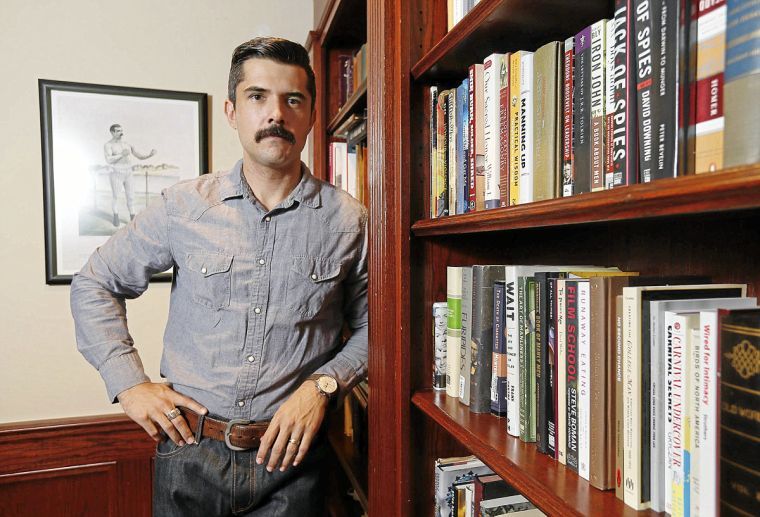 Brett McKay, the founder of The Art of Manliness blog, runs the site with 6.6 million monthly visitors from his home in Tulsa. MATT BARNARD/Tulsa World

An earlier version of this story misstated the number of monthly visitors to The Art of Manliness. The error has been corrected.

In 2008, Brett McKay was in a now-defunct Borders bookstore on 81st Street and riffling through men’s magazines when he realized he just didn’t connect to the content.

He’s a married man; articles about hooking up, washboard abs, drinking and eye candy felt tailored to a different demographic.

So he began scrawling in a Moleskine notebook ideas for the sort of content he wanted to read, crafting a more wholesome and classic ideal of a men’s magazine.

That epiphany lead to The Art of Manliness, a website that launched in 2008 during a shifting era of masculinity. The site has now spawned multiple books, generated ad revenue from 6.6 million monthly visitors and built a network of contributors to take some of the writing load off of Brett and his wife, Katie. All from a home in Tulsa.

The site surfaced at the beginning of a movement toward the old-fashioned, Brett said, and the website helped to push that movement along.

Brett often references a quote about how generations rebel against their fathers and make friends with their grandfathers, and the process was well underway in the past decade.

“I think a lot of people maybe aren’t so keen on the baby boomer vibe,” Katie said. “We’re just trying to bring back the best parts of the past.”

An early article was on straight-razor shaving, a barbershop throwback that devotees swear offers a closer cut. It went viral on social news sites and established The Art of Manliness in the men’s interest world online, Brett said.

The site offered an independent take on a men’s lifestyle magazine, which filled a void between niche forums and “the big guys” in men’s lifestyle such as Esquire, AskMen and Men’s Health.

Visitors to the site are just as likely to stumble onto an article about style as they are about social skills. Many pieces are informational. Some articles are light-hearted, such as the one about walking like a ninja, and others are candid and sincere.

Wearing a chambray shirt with sleek leather Wolverine boots and crisp, cuffed selvedge denim that looks as if it could stand upright without the wearer, Brett is 5-foot-11 (6 foot in boots) with an athletic build consistent with his high school football background.

In keeping with the aesthetic of the site, he’s kept his upper lip hirsute since a “Movember” mustache month years ago.

The old-fashioned facial hair makes him identifiable around Tulsa and to his 3-year-old son, Gus, whose full name is Augustus. Brett has had the mustache since Gus was born, and taking a straight razor to his face would make him a stranger to his son and his 1-year-old daughter, Scout, who is named for the character from Harper Lee’s novel “To Kill a Mockingbird,” in which a calm, articulate lawyer demonstrates masculinity by example.

Brett culled a lot of life advice from his former football coaches who would dispense wisdom during water breaks, and from elders and community members of his Mormon church. A defining experience of his life was a stint as a service missionary. He crossed the border to Tijuana, Mexico, where he helped a poor community and learned life lessons about service, self-reliance and solidarity.

When he returned stateside, his girlfriend Katie remarked that he seemed as if he had “manned up.”

Not that he claims he’s an expert, even if readers might expect him to be a “paragon of manhood.”

“I don’t try to put myself out there on the website like that,” Brett said. “I’m just a regular guy trying to figure this out. I’m learning, and what I write on the blog is like sharing what I’ve learned.”

Katie, who became his wife, contributes to the site. She taught history at Tulsa Community College and started using her research skills and knowledge as a historian to produce content while augmenting it with a female perspective on masculinity.

Brett started the site as a hobby in law school, an outlet outside of classes and his side job in legal research. Originally from Edmond, he attended the University of Tulsa’s law school because it offered the best scholarship — and because Katie’s parents allowed the couple to live with them.

Soon, the site expanded enough to provide a livable income. But it became more labor-intensive. Although he briefly took a full-time corporate law job, Brett skipped the bar exam, quit the law gig and doubled down on defining the modern man.

Now, the site has allowed the couple to buy their own home, with a robust garden, wood floors and a pool and nearly complete deck addition. Even in their new home, the McKays are still just down the street from Katie’s mom, who baby-sits Gus and Scout from noon to 6 p.m. Those are work hours.

Adorning the entryway of the home’s office is a giant mustache, a symbol for The Art of Manliness.

“We use humor, but it’s not actually humor that pokes fun at what we’re doing,” Katie said. “When they come to our site the first time, some people think its a joke or that it’s satirical. … But I think that our intent behind it comes through, that we’re actually sincere.”

The McKays often dispense life lessons and wisdom on the site. One contemporary problem they see is overzealous parenting. Doting moms and dads are addressing the needs of their children without letting them develop their own skills.

“We’re a site for men, aimed at men, but really we’re a site about growing up well,” Katie said.

And for people to grow up well, life lessons from men of virtue need to trickle down to the next generation.

“One of the things I love about Oklahoma and Tulsa is that men here, they’re solid dudes, they’re trying to do the right thing,” Brett said. “If you get to interact with a young man, take time to dispense some advice.”

We love the butterflies and moths but oftentimes don’t feel the same about them while in the caterpillar stage. This means we have to make some choices.

Q: My husband, daughter and I are planning to combine households with my mother. She is a widow with some new health problems, and no longer wishes to live alone.

Living with a short sleep gene: 'It's a gift'

Brad Johnson and his family were among the first tested for the "short sleep gene." They sleep fewer hours and bypass ill effects of sleep deprivation.

While renters are typically prevented from “altering” a property, you still can spice up your space without upsetting the landlord. Here are some tips.

Struggling lingerie brand Victoria’s Secret, which has been closing stores in recent years, is getting rid of its scantily clad Angels.

Demand for pickup trucks remains strong. But competition among makers leads to great deals on leases, including Toyota Tacoma, Chevrolet Colorado and GMC Canyon. Here are the best lease deals on pickups for June 2021.

Ask the Builder: How to clean algae off siding, roofs, patios

Dear Amy: My friend "Laura" has seemed distant to me, lately.

Brett McKay, the founder of The Art of Manliness blog, which has 6.6 million monthly visitors, runs the site from his home in Tulsa. MATT BARNARD/Tulsa World

Brett McKay (right) and his wife Katie McKay, the operators of The Art of Manliness blog, talk about the site in their home office in Tulsa, Okla. on Friday, August 8, 2014. MATT BARNARD/Tulsa World

Brett McKay (left) and his wife Katie McKay run The Art of Manliness blog, a site that fills the void between nice forums and the big men's magazines like Esquire, AskMen and Men's Health. MATT BARNARD/Tulsa World

Brett McKay, the founder of The Art of Manliness blog, runs the site with 6.6 million monthly visitors from his home in Tulsa. MATT BARNARD/Tulsa World