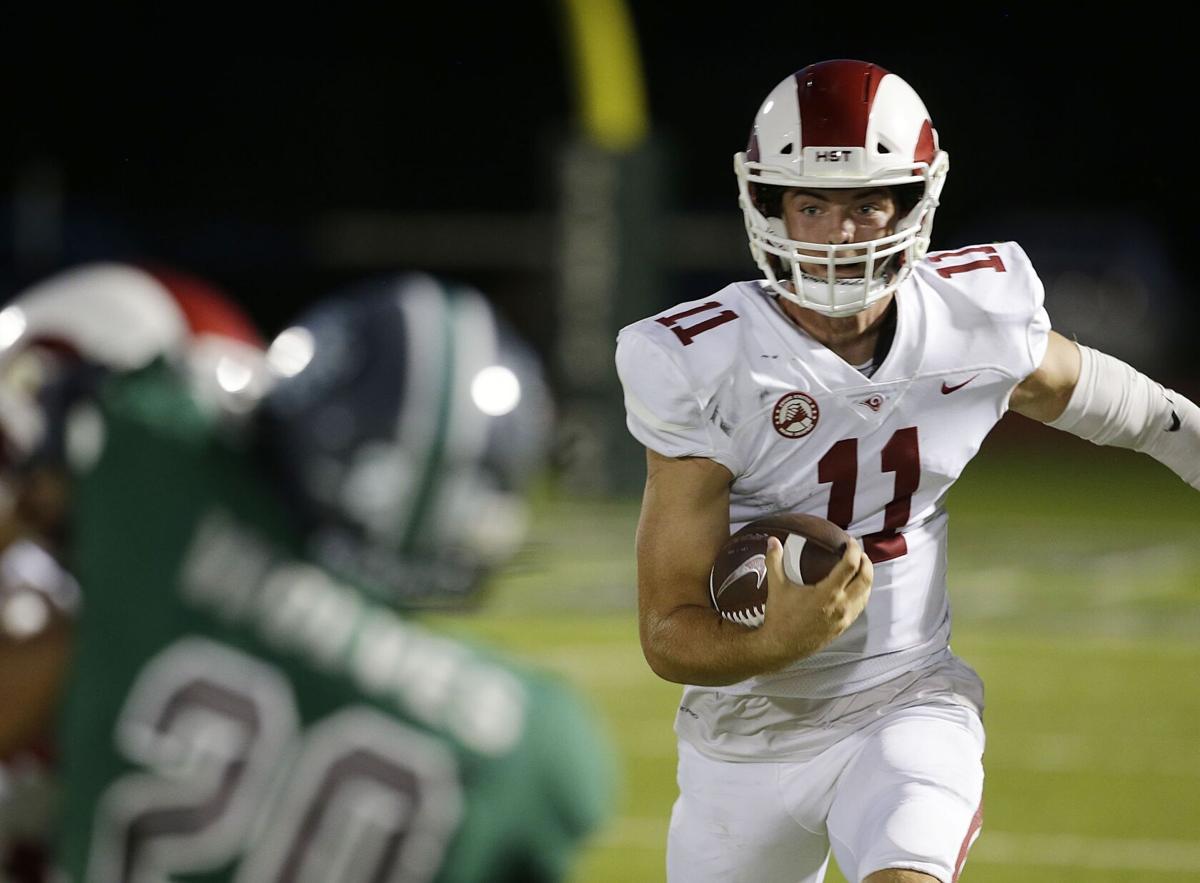 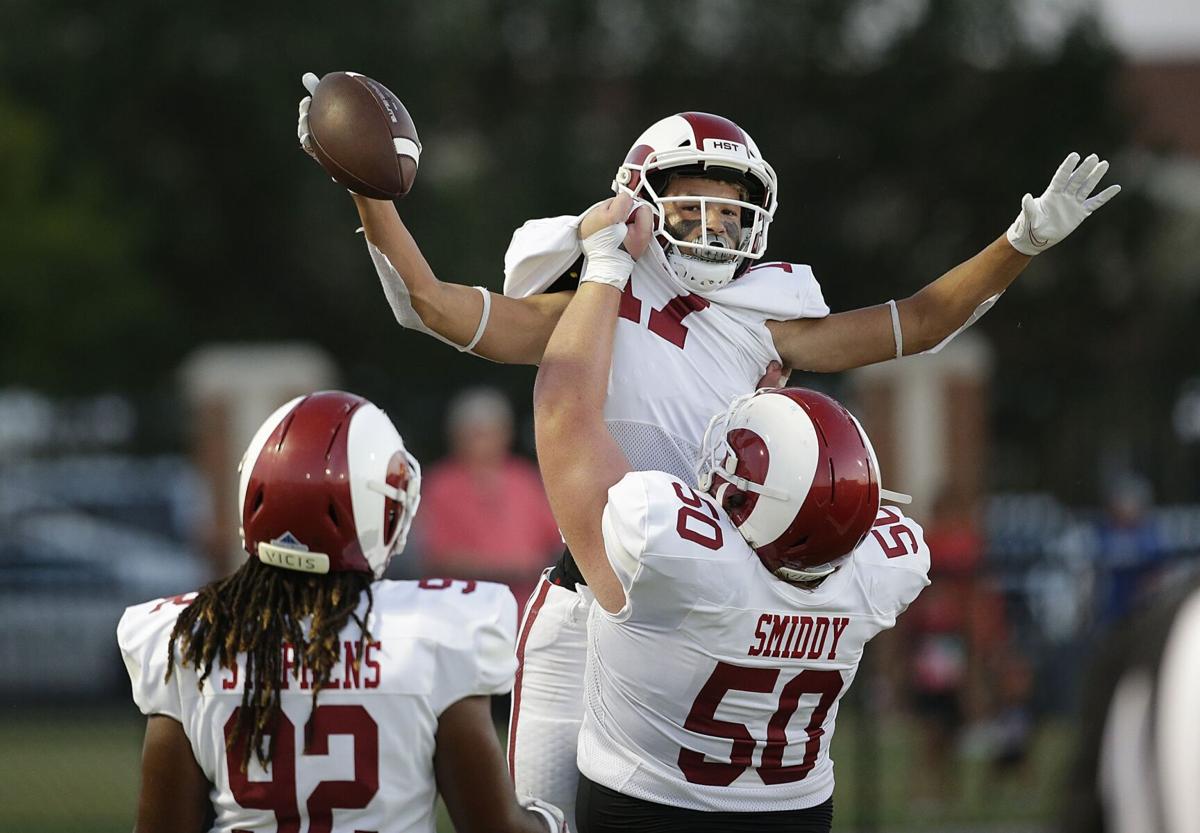 Owasso’s Hakelan Carney is hoisted into the air by Jake Smiddy after Carney scored a touchdown against Edmond Santa Fe Friday night. 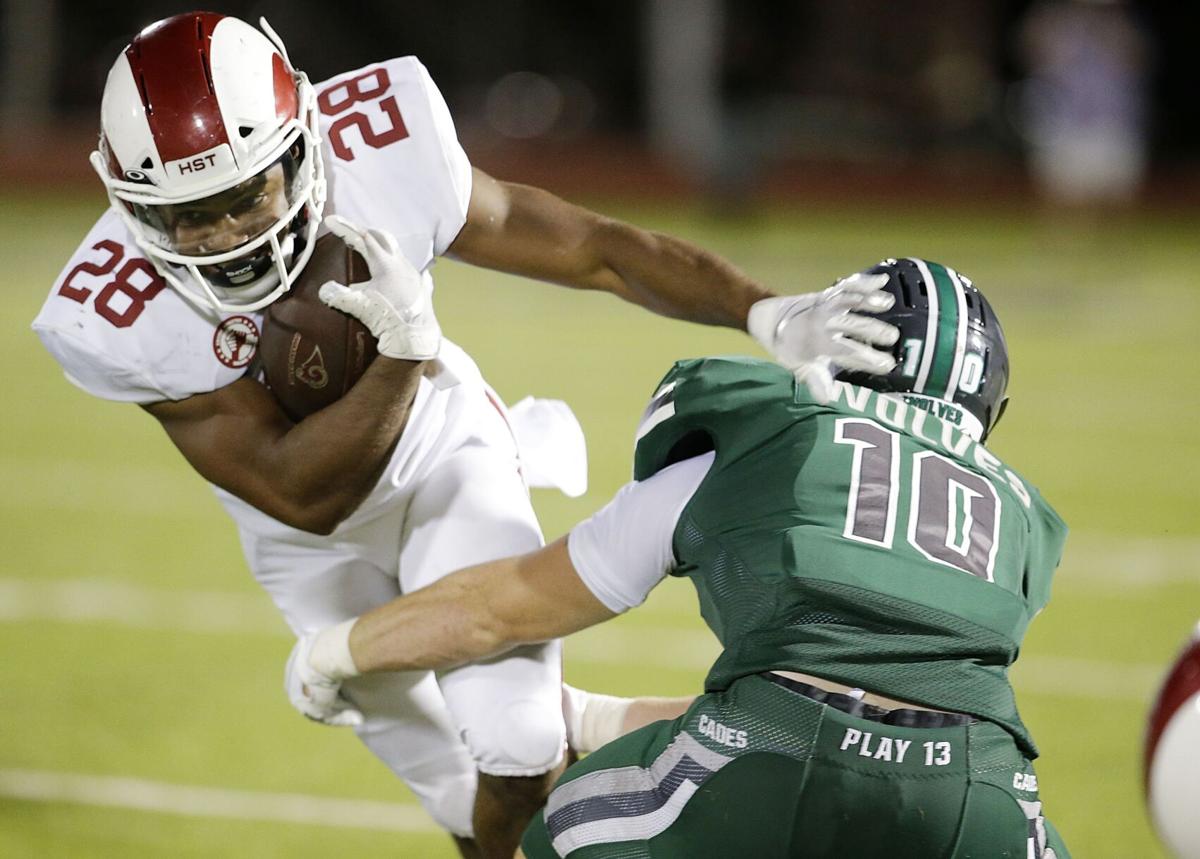 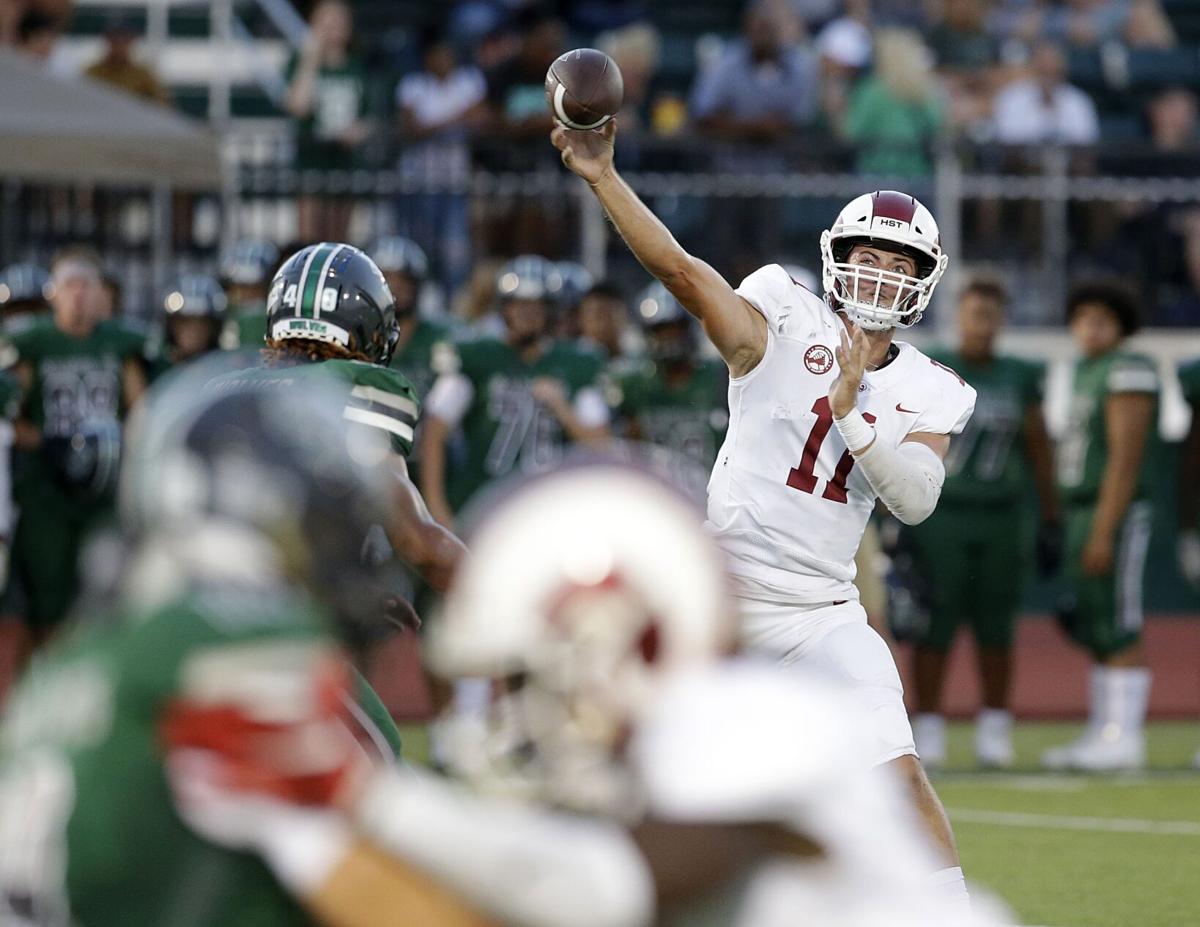 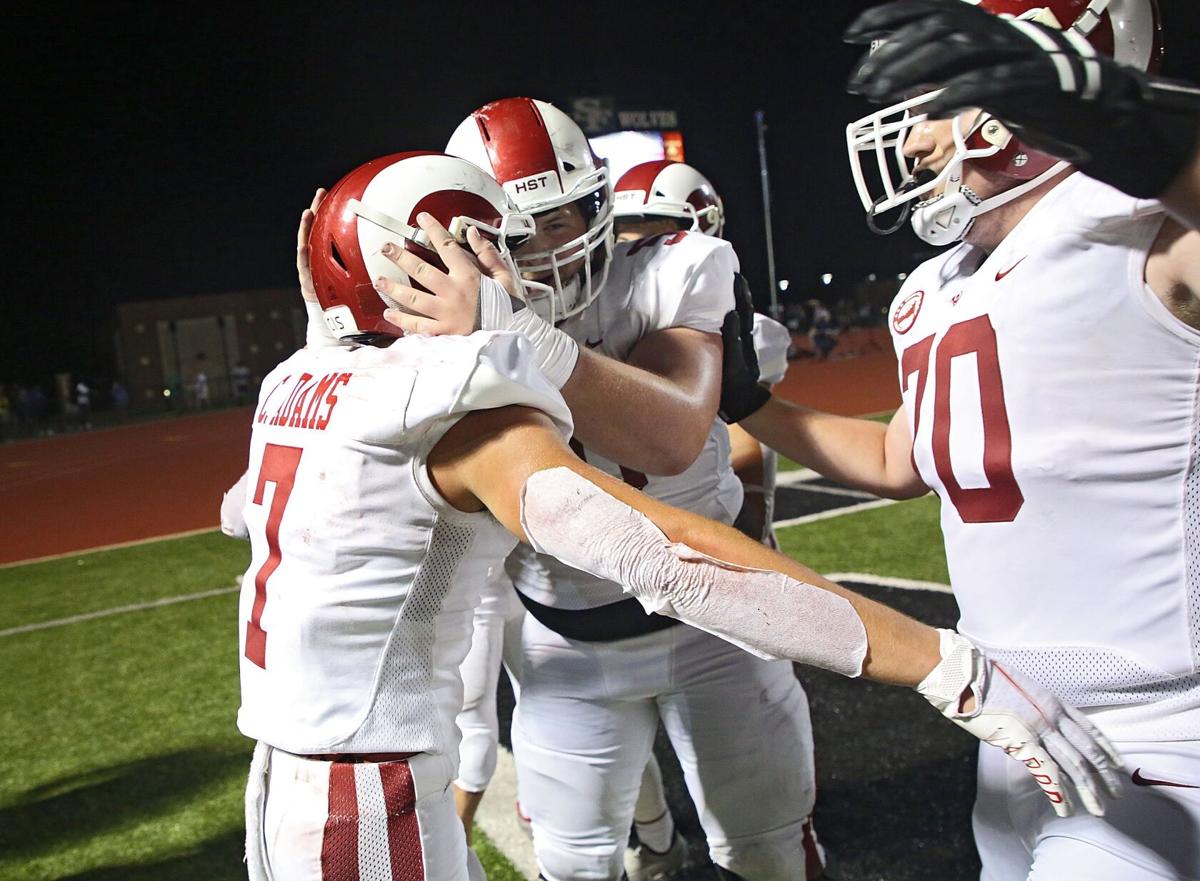 Owasso's Cole Adams is mobbed by his teammates after a touchdown catch against Edmond Santa Fe in their football game Friday, Aug. 27, 2021 in Edmond, Okla.

Owasso’s Austin Havens is establishing himself as one of the state’s top quarterbacks and performances like he put on last Friday night against Edmond Santa Fe are a big reason why.

The junior completed 18-of-28 passes for 262 yards and five touchdowns and rushed for 65 more yards to lead the Rams’ offensive juggernaut in a 45-22 romp over Class 6AI No. 4 Edmond Santa Fe at Wolves Stadium in the season opener for both teams.

This Friday, the Rams will host Fayetteville (Ark.) at 7:30 p.m., in a rematch of Owasso’s 31-17 win last year. Owasso head coach Bill Blankenship coached Fayetteville to an Arkansas Class 7A state title in 2016 before moving to the Rams.

Owasso is coming off an impressive season opener. The Rams, ranked No. 2 in 6AI, rolled up 518 yards of offense and mostly held Santa Fe’s standout wide receiver, Talyn Shettron, in check, although Shettron did catch eight passes for 80 yards and two touchdowns. But he wasn’t the top producing receiver on the field — Owasso’s Kelan Carney caught six passes for 118 yards and three touchdowns and Cole Adams added seven catches for 100 yards and two scores.

Owasso defensive lineman Chris McClellan spent much of the night in the Santa Fe backfield harassing quarterback Scott Pfieffer, who completed 19 of 41 passes for 210 yards. The Wolves’ top offensive threat turned out to be freshman tailback Demarius Robinson, who carried 25 times for 149 yards and scored a late touchdown.

“It’s a quality opponent,” Blankenship said. “They’ve got guys who can play. Coach (Kyle) White does a great job. We knew we would have to grind it out. The first half was exactly what we thought it would be. We were fortunate we were able to get a couple of turnovers and kind of get some space from them.”

Havens hit Carney on a 12-yard touchdown pass to cap Owasso’s opening drive. Santa Fe — coming off a 10-3 season that included a state title-game appearance — answered with a 48-yard pass from Pfieffer to Shettron and the duo connected on a 2-point conversion pass to give the Wolves their only lead at 8-7.

Owasso jumped back ahead with a 57-yard Havens-to-Carney touchdown pass. A 64-yard reception by L.B. Reeves set up a 1-yard scoring catch by Shettron to tie the game, but the Rams started pulling away. Carney juked his way to the end zone for his third scoring catch, covering 21 yards, and Havens then found Adams open for a 46-yard scoring strike that put the Rams up 29-15 at halftime.

Santa Fe recovered a muffed Owasso punt at the Rams’ 25 with 2:44 left in the half but managed only four yards on four plays, a storyline that continued after halftime. The Wolves twice drove inside the Owasso 30 in the third quarter but lost the ball on downs both times. Owasso marched 73 yards after the latter possession, scoring when Havens hit Adams with an 18-yard touchdown pass to make it 35-15.

The Wolves’ third trip inside the Owasso 30 of the second half ended the same as the first two did and the Rams essentially sealed the win on a subsequent 74-yard scoring run by Emery Neeley, who had 97 yards on seven carries. Derrick Overstreet added 76 yards on 12 carries for the Rams, who had 252 rushing yards.

Owasso’s Hakelan Carney is hoisted into the air by Jake Smiddy after Carney scored a touchdown against Edmond Santa Fe Friday night.

Owasso's Cole Adams is mobbed by his teammates after a touchdown catch against Edmond Santa Fe in their football game Friday, Aug. 27, 2021 in Edmond, Okla.