In reference in Oklahoma Highway Patrol pursuits, anyone who runs from police is an imminent danger to the community and people around them.

They should be stopped.

Letters to the editor are encouraged. Send letters to tulsaworld.com/opinion/submitletter. 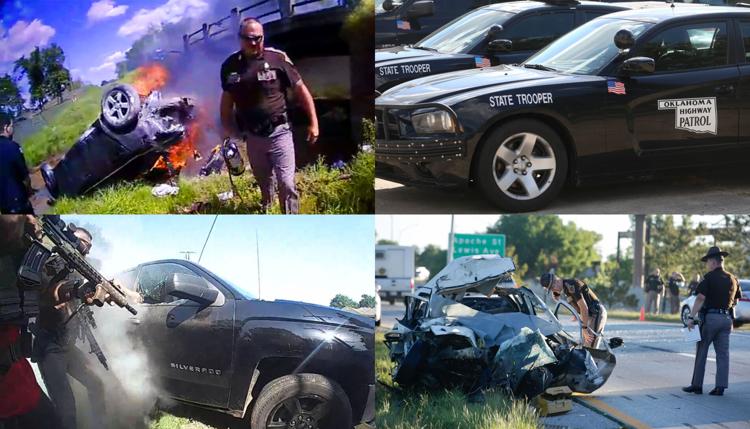 Stolen property or traffic infractions prompted all but one of the Oklahoma Highway Patrol vehicular pursuits that killed 18 people the past five years despite policy requiring troopers to weigh if the benefits of apprehension are worth a chase’s risks.

At least eight individuals killed weren’t the eluding drivers. Five were uninvolved motorists, at least two were passengers in fleeing vehicles, and one was a Highway Patrol lieutenant on foot struck by another trooper’s cruiser at high speed.

No troopers have been disciplined in any of the fatal pursuits for which OHP has provided varying levels of documentation to the Tulsa World in response to open records requests during the tenures of three different Department of Public Safety commissioners.

The Tulsa World filed litigation against OHP in October to compel the agency to adhere to a lawsuit the newspaper won in 2010 in which the state courts declared use-of-force records to be public and mandated their release. OHP had delayed and denied for a year as the newspaper tried to get the agency to hand over force records, explain reporting processes and answer questions about policies — prompting the World's court action.

Oklahoma trooper spins out car at 109 mph that kills driver. His superiors: 'Try not to talk about it'

Someone told him to “treat it like a shooting.” A supervisor referenced a law not yet in effect that would have protected their communications after the violent crash. "We'll get 'er taken care of," his troop commander said.

'A look of fear': Fatal pursuit in area unfamiliar to trooper kills woman with fleeing driver

About 15 minutes after the trooper clocked a car at 88 in a 75 mph zone in April 2020, a 30-year-old woman died with a man she was dating who was fleeing authorities in Creek County.

An Oklahoma Highway Patrol memo noting an “alarming increase” of troopers shooting people and at cars focused on the first of three fatal shootings in less than five months in 2019.

OHP policy stipulates that troopers aren't supposed to fill out use-of-force reports when their actions cause serious injury or death, nor when they attempt to or actually use deadly force.

Last Sunday, Tulsa World reporter Corey Jones showed that 18 people died in 15 OHP pursuits in the past five years, but that none of the chased drivers were suspected of violent crimes when the pursuit began, the editorial says.

Dashcam video of OHP trooper pursuit that ended with a fatality

The Oklahoma Highway Patrol's pursuit policy prohibits troopers from chasing a fleeing vehicle the wrong way on a road with four or more lanes of traffic. An arrest affidavit in the fatal crash says the eluder drove the wrong way on 41st Street — a five-lane roadway — before turning onto 94th East Avenue.

Commissioner John Scully said in a news release that he decided to release the protocol because transparency is a high priority for the agency’s administration after he was appointed to the position in September.

The Oklahoma Highway Patrol released 44 pages of documents Friday, nearly a year and a half after the Tulsa World first requested records related to the April 7, 2018, incident. The agency provided the newspaper with the chase's video three weeks ago, which doesn't show the crash because the rollover caused an equipment malfunction, according to the agency.

What happened when a trooper chased his stolen cruiser in a stolen car? OHP will only say it was 'not a pursuit'

Oklahoma wouldn't give up its trooper-pursuit policy, but 36 states did. How does OHP compare in transparency and accountability?

The World filed open records requests to learn how many law enforcement agencies publicly release their pursuit policies and compared those protocols with OHP policy after obtaining it as a defense exhibit in a recent felony murder trial.

OHP didn't hand down discipline in either instance. But both situations also appear contrary to the policy's overarching aim to "promote the safety of all persons" and strike a balance between "law enforcement effectiveness and the risk of injury to the public."

After less than two and a half hours of deliberation Monday, the 12-person panel recommended D’angelo Burgess serve life with a possibility of parole.

The Oklahoma Highway Patrol pursuit that killed Lt. Heath Meyer quickly turned dangerous and should have been swiftly terminated pursuant to the agency’s own policy, according to an expert witness for the defense.

Jurors heard testimony on Wednesday from the pursuing trooper who struck Lt. Heath Meyer at a partial road block in Moore on July 14, 2017. The collision happened on northbound Interstate 35 near 27th Street.

What happened when a trooper chased his stolen cruiser in a stolen car? OHP will only say it was 'not a pursuit'

The chase could be construed as a violation of an international law enforcement standard that "the pursuing vehicle shall activate emergency lights, sirens, and cameras, and they shall remain activated for the duration of the pursuit."

Defense can argue troopers had fault in pursuit that left one of their own dead, judge rules

The international policy standards prohibit chasing vehicles in the wrong direction on divided highways and one-way roads. The former scenario played out on U.S. 75 in May 2017, with an innocent 23-year-old married father losing his life.

Video: "Was it really worth all that?" Widowed mother looks for answers after fatal crash

One of those killed was a fellow OHP trooper. DPS Commissioner Rusty Rhoades said he found “nothing that concerned me” after reviewing trooper actions in those fatal pursuits.

The Oklahoma Highway Patrol and Sapulpa Police Department each deemed their respective employees’ actions in the chase to be within policies and procedures.

The Tulsa Police Department and Tulsa County Sheriff’s Office are transparent with their pursuit policies, one of which placed its policy online. Both agencies emphasize the risks involved in pursuing motorists for lesser offenses.

Get six months of unlimited articles for $1. Subscribe today for a digital-only subscription in less than a minute: https://go.tulsaworld.com/aug1

Letter: Struggling to support Sen. Lankford in next year's election

"I have never heard anything from Sen. James Lankford, not even a thoughtless form letter. His office never returns letters, calls or emails on any subject I have written," says Prague resident Joe Broz.

Letter: No need for big, tin tube in downtown Tulsa

Letter: Gov. Stitt bullying his way to power over people who disagree with him

"Once again, Gov. Kevin Stitt is making a play against the people of Oklahoma," says Tulsa resident Sharon McGovern.

Letter: Contractors follow strict codes for public safety, so why not a vaccine?

"Electricians are smart people, capable of understanding science and acting in a way that protects the public," says Tulsa resident Kendall Wynn Carpenter.

"I'm not sure where Inhofe, Cole and Lankford have gone, but I pray daily for their safe return," says Tulsa resident L.J. French.

"The former president also slowed down the visa program to allow Afghanis who supported the U.S. to be able to leave before the deadline," said Tulsa resident Tom Dial.

Letter: President Biden isn't alone in taking blame for how the war ended

"The Congress authorized the war and funded it for 20 years," says Tulsa resident Tom Walker.

Letter: Problem existed in restaurant industry when workers not paid a living wage

Reading the article "Reaching new heights" (Sept. 19) about the re-opened Summit Club, a section stood out to me: “To offset (the staffing cri…