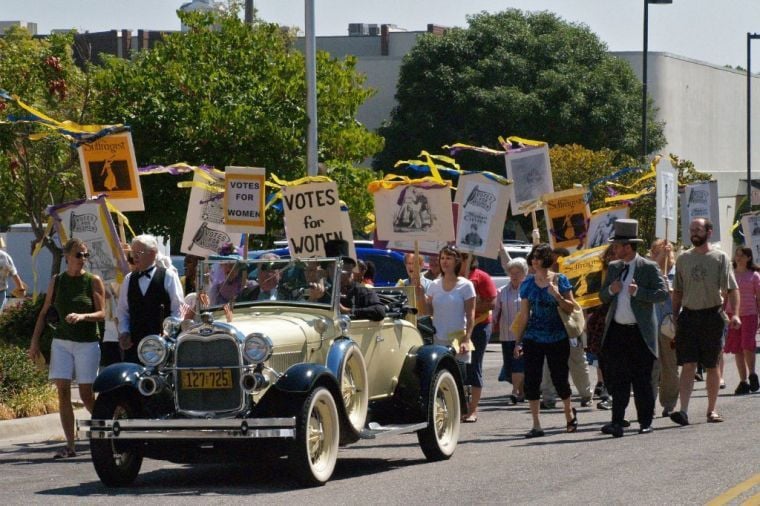 Reenactment of a women's march for the right to vote from 2010 in Bartlesville. Women are still advocating for equality. 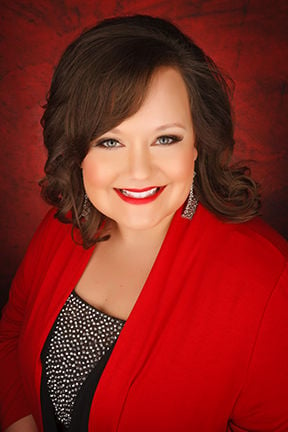 Do you remember the first time you voted? I do. Finally 18, the excitement of the milestone pulsed as I cast my first ballot. It’s a fond memory. I still have that first “I voted” sticker.

By the time I was 16, I was really annoyed that I had to wait until I was 18 to vote. My teenage angst fueled my impatience. But I knew at a young age what remains true today — my vote is my voice. The wait was bearable only because I knew without a doubt that I would have my chance to vote when I turned 18. No one would stand in my way. There would be no obstacles.

As I reflect on my first vote, I must honor the thousands of women who carried me to the polls: the suffragists. My path to the polls was paved by their courage, intelligence and determination. This August, our nation will celebrate the 100th anniversary of the 19th Amendment becoming law. The 19th Amendment provides that the right to vote shall not be denied or abridged on account of sex.

Oklahoma ratified the 19th Amendment on Feb. 28, 1920, becoming one of the original 36 states to ratify the amendment. But Oklahoma women were voting prior to this. In 1918, Oklahoma voters amended the state Constitution to grant women the right to vote.

The campaign surrounding the vote was dramatic. The 1918 flu epidemic presented a major obstacle. Carrie Chapman Catt, a prominent national leader for women’s suffrage, was scheduled to speak in Oklahoma before the vote. Because of the epidemic, the governor banned gatherings of more than 12 people in Oklahoma. The ban went into effect the day Chapman Catt was scheduled to speak. But they persisted and the suffrage question passed. And we’re all better for it.

Not every woman in the United States gained the right to vote when the 19th Amendment became law. African American women, Asian American women and Native American women would be disenfranchised for years to come. Many women faced various obstacles to vote because of discriminatory state and local laws. Many of the women who played a key role in the suffrage movement were disenfranchised. This injustice should not be ignored.

This 19th Amendment’s centennial is a time of reflection. The lessons aren’t just for your daughters; your sons will also benefit from learning about the suffragists. The lessons of political mobilization and perseverance in the face of overwhelming opposition are still relevant, 100 years later. Carrie Chapman Catt’s famous words provide guidance for us today: “To the wrongs that need resistance, to the right that needs assistance, to the future in the distance, give yourselves.”

I can think of no better way to celebrate the centennial than to exercise our right to vote. Our democratic process requires participation from all. Perhaps if we talked more about leaders like Ida B. Wells, Alice Paul and Kate Chapman Stafford, our neighbors who are apathetic about voting may be inspired to become informed voters. It may even encourage more women to run for office in Oklahoma, and that’s something that will benefit our state.

The suffrage movement lasted over 70 years, across three generations of women. This national centennial represents decades of passion and persistence. The suffragists sacrificed their safety, freedom and more. Many of them died before the right to vote was won. They never experienced the excitement of voting for the first time. But thanks to their determination, I know that excitement. I strive to maintain that excitement and to be passionate about voting. I owe the suffragists that at the very least. When I put on that iconic “I voted” sticker, I remember that I voted only because they demanded it.

Sarah Brown is a commissioner on the Oklahoma Commission on the Status of Women.

About 82% of Americans support a paid parental leave, which is an unheard of agreement around any U.S. issue, so it's time for Congress to act, says editorial writer Ginnie Graham.

Opinion: From flat Earth to the-election-was-stolen

What drives the anti-American racist is a quest to maintain the power they have and feed their unquenchable need for more power, writes columnist Drew Diamond.

Reenactment of a women's march for the right to vote from 2010 in Bartlesville. Women are still advocating for equality.