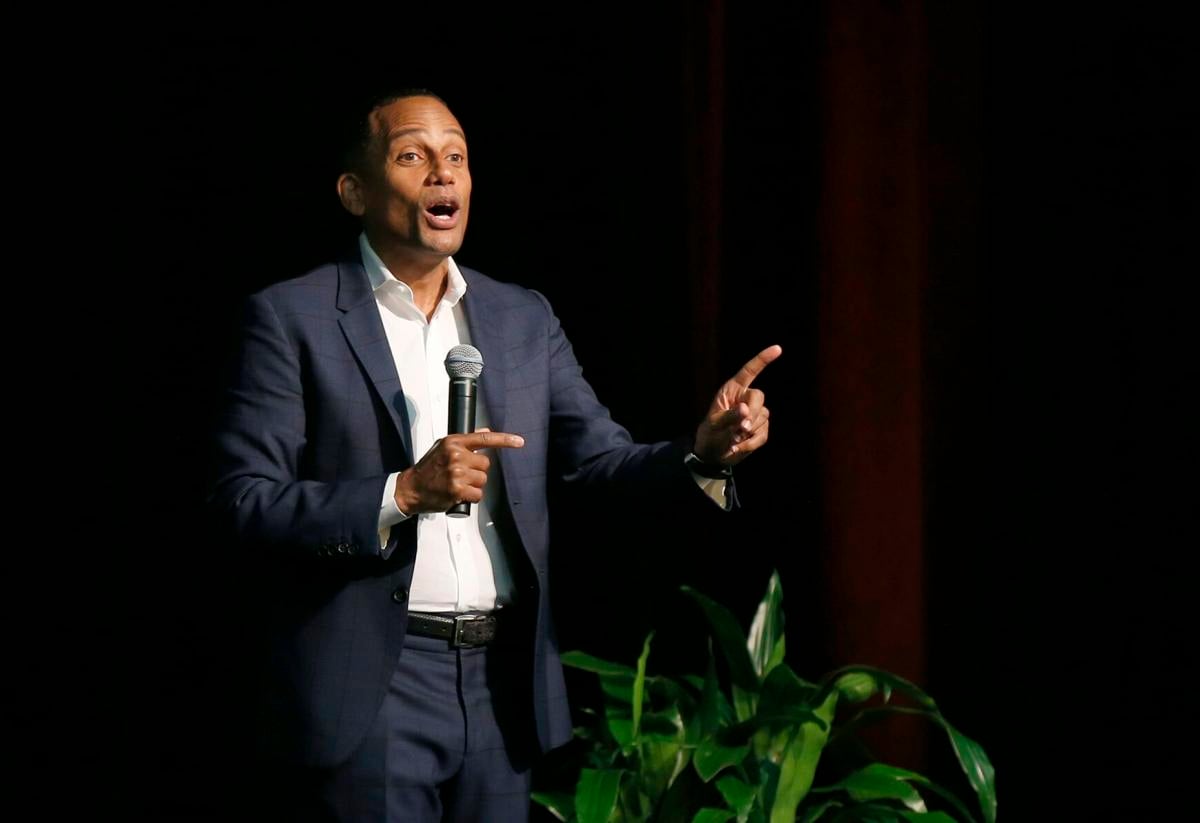 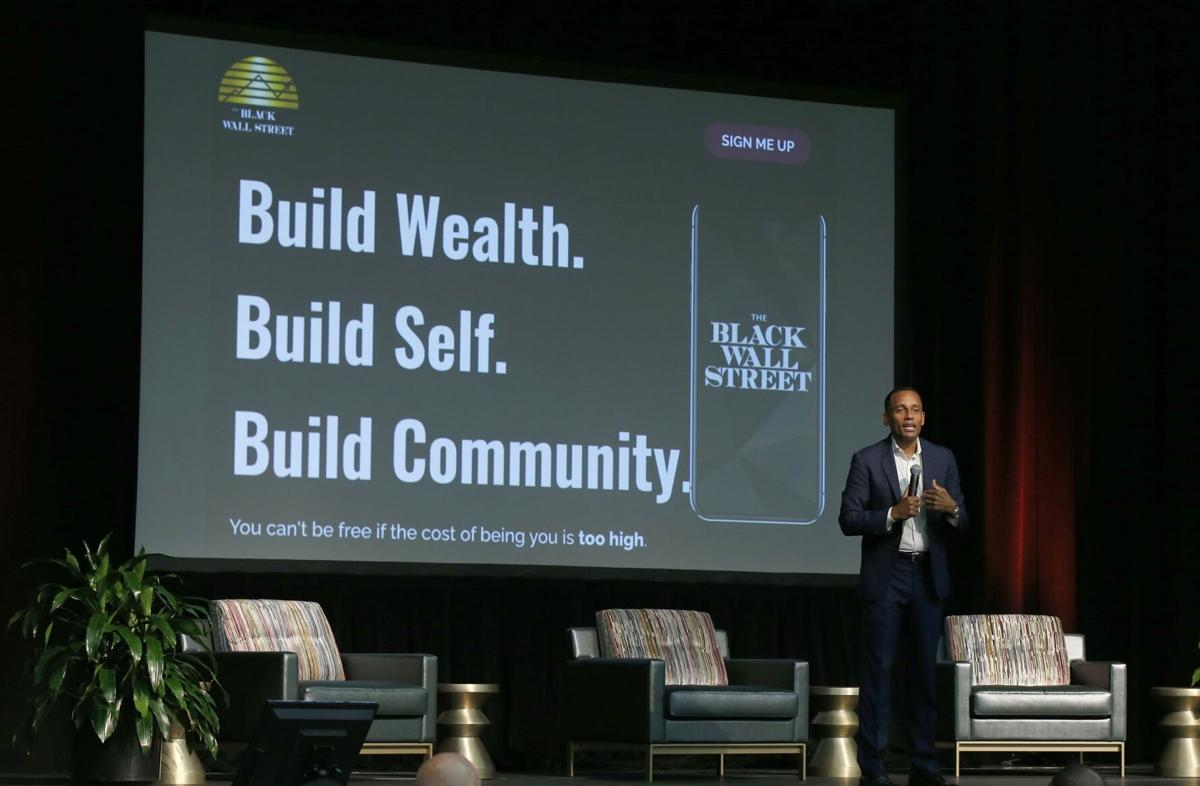 As the centennial commemoration of the Tulsa Race Massacre came to an end, a theme emerged: Eliminate the racial wealth gap for U.S. economic global dominance.

Two sides of downtown Tulsa on Tuesday served as bookends to the days-long reflective and emotional anniversary. Both evoked the horror of the massacre, but then made calls to action.

President Joe Biden spoke from the Greenwood Cultural Center as the White House rolled out a fact sheet announcing new administrative actions to build Black wealth and narrow the gap.

At the same time, prominent Black business and industry leaders held an Economic Empowerment Day at the Cox Business Convention Center detailing how individuals and institutions can do the same. The summit offered the most comprehensive discussions, emphasizing the future.

Eric Stevenson, president of Nationwide Retirement Solutions and University of Oklahoma regent, co-hosted the event and spoke of reviving the “Greenwood mindset” of self-sufficiency and strength.

“We not only have to recognize the thriving and prosperous Black community before the massacre, but how do we work together to restore the Black community?” Stevenson said.

But, because the typical white U.S. family has a net worth 10 times higher than the typical Black family, the bigger benefits would be among people of color, though white families in or on the edge of poverty also would be helped.

“We’ve allowed a narrowed, cramped view of the promise of this nation to fester, the view that America is a zero-sum game, where there’s only one winner,” Biden said. “If you succeed, I fail. … Instead of if you do well, we all do well.”

That’s backed by a Citigroup report last year stating a loss of $16 trillion in the U.S. gross domestic product in the 20 years ending in 2019 due to discriminatory practices in areas of bank lending and housing credit, wage disparities and lack of post-secondary education.

Claims of racial progress are usually based on laws that reversed Jim Crow segregation and oppression such as the Civil Rights Act. Often what was on paper was not in practice.

A 2018 Brookings Institute analysis found that Tulsa homes in majority Black neighborhoods are valued at 40% less than those where less than 1% of Black residents live. That’s a difference of $23,388.

Black homeownership is lower today than when the Fair Housing Act passed in 1968.

The Homestead Acts after emancipation deeded land to only about 20% of Black families. Social Security coverage in 1935 did not extend to farm and domestic workers, which were the jobs held by 65% of Black residents.

That’s why the design of laws and policies matters, said Maya Rockeymoore Cummings, politician and Washington, D.C.-based consultant. She said less than 10% of the initial Paycheck Protection Program loans were awarded to Black-owned businesses.

“The focus of equity is not racism,” Cummings said. “It looks at where your gaps are and develop and create strategies to close those gaps. That is where we need to be going in the community. Do not forget about policy and systems.”

Growth strategies involve retirement security, education opportunities, housing, entrepreneurship and access to capital. Some require legislation, but most discussions at the summit focused on corporate and nonprofit leadership.

“There is not one silver bullet to address the racial wealth gap,” Cummings said.

On the public side, gaining traction are targeted home down payment assistance, expanded college tuition grants and waivers and so-called baby bonds, which would be a type of savings accounts given to infants for use at age 18.

Sen. James Lankford proposed a bill that would allow workers to withdraw up to $1,000 from retirement savings accounts without penalties for emergencies. It is to encourage retirement savings and reduce use of high-interest credit cards and payday lenders.

The legislation is in response to 60% of U.S. residents unable to cover a $400 emergency. The imbalance of savings can be seen in Tulsa, with south neighborhoods having 10 times more banks and credit unions than in north Tulsa areas.

The White House unveiled initiatives around housing and federal contracts. Housing efforts will address inequities in home appraisals and other forms of discrimination, such as insurance pricing.

For corporate and nonprofit leaders, no longer it is enough to check a box for diversity training or outreach initiatives. Outcomes are what count.

“Corporate leaders have always had some type of responsibility to the communities where they work and earn revenue,” said Chris Graham, chief investment officer at Nationwide Financial. “Now, the market demands corporations to be more responsive.”

Consumers and potential employees want diverse working environments and top leaders in their companies. To be competitive, they must be purposeful about how they hire, promote and fill board seats.

Equally important are ensuring minority- and women-owned financial companies are considered in managing assets like retirement accounts and in other contracted roles.

“Not everyone will agree on everything, and that’s OK,” Graham said. “That’s where leadership really matters. We need leaders to step up and lead.”

Actor Hill Harper spoke about cryptocurrency being an equalizer, taking out human bias. Ronald Parker, the president and CEO and the National Association of Securities Professionals, spoke of building banking relationships, being aggressive about Black asset ownership and obtaining transferable skills.

“Reinvent yourself continually and be a learner,” Parker said. “I took my skills into retirement and re-directed toward my community. I’ve reinvented myself so many times I lost count. It will keep you fresh and relevant.”

Financial literacy is an area all students, and most Americans, could use more knowledge. The summit offered sessions on leveraging paychecks.

Taken together, these approaches could possibly narrow and, ultimately eliminate, the racial wealth gap.

“Does anyone doubt this whole nation would be better off with these investments?” Biden said. “The rich will be just as well-off. The middle class will do better, and everybody will do better.

“It’s about good-paying jobs, financial stability and being able to build some generational wealth. It’s about economic growth for our country, and out-competing the rest of the world, which is now out-competing us.”

Wayne Greene: The antidemocratic forces of voter suppression can move quickly next year

Two dozen live-round bills remain available in the Legislature that could do real mischief to democracy in Oklahoma, the column says.

As a survivor of human trafficking, I want to find purpose from my experience and help others. Honestly, it’s a tough journey, writes columnist Tifanie Lyn-Brumbaugh.

Keith Ballard: 2015 bond issue was huge success; TPS patrons have chance to do it again

The Tulsans who went to the polls on March 3, 2015, and voted in support of the bond may not have realized the legacy they would leave for Tulsa children, but I can see it so clearly across the school district today, writes the former Tulsa Public School superintendent.

Ginnie Graham: U.S. will only be a global economic power if racial wealth gap goes away

Ronald Reagan: On the anniversary of D-Day, remember some things are worth dying for

The men of Normandy had faith that what they were doing was right, faith that they fought for all humanity, faith that a just God would grant them mercy on this beachhead or on the next.

Legislators who have chosen to criminalize dissent rather than address the structural racism in our law enforcement and other systems have not learned from our history and are intensifying the conditions that led to last summer’s uprising, write columnists Puneet Cheema and Rep. Regina Goodwin The answer to last year’s protests is not further criminalization, but rather to address the racial inequities that sparked them.

Cartoon: The not-so-great wall of China