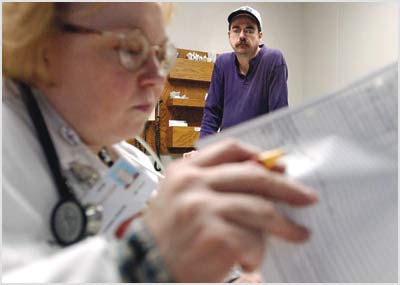 In this 2005 photo, Dr. Frances Haas interprets the result of a patient’s blood work to determine whether the HIV-fighting medications are still working. 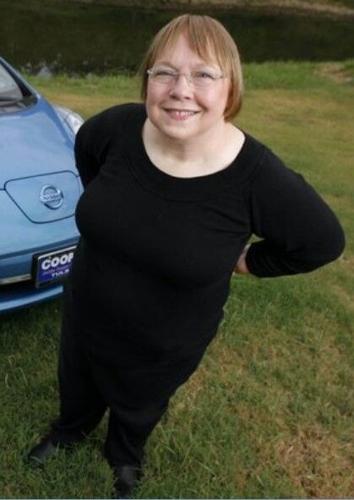 Decades ago, Frances Haas was attending church when an epiphany struck.

“I was at Mass, and God said, ‘Take care of people with HIV.’ That was it,” Haas said. “It was so definitive that I didn’t question it. And I’m not that religious. But I knew at that point what I was going to do. No matter what, I would work with HIV patients, whether that was surgery or pediatrics or whatever field I chose to go into.”

This was no small task from the the divine. Haas decided to enter medical school after having been a nurse for 19 years. At age 39, this late-in-life choice came after some self-reflection when her mother died in 1987.

Haas saw the stigmatism of AIDS patients and knew treatments weren’t great. The disease was politicized in a cultural war over LGBTQ+ rights that worsened and halted progress in attacking the HIV virus, which causes AIDS.

“A lot of people turned their backs on them,” Haas said. “There were specialists who wouldn’t treat them; surgeons who refused to do surgery. There was difficulty in finding general practitioners. A lot of physicians didn’t know how to care for HIV patients and didn’t feel comfortable treating it.”

That was a large part of why World AIDS Day was formed in 1988 and continues to be held annually on Dec. 1.

The societal pushback to HIV and AIDS didn’t phase Haas.

While doing a residential rotation at the Ryan White HIV Clinic, Haas was introduced to Tulsa physician Jeffrey Beal, who was one of the few primary care practitioners in the city treating AIDS and HIV patients.

“In my group of residents, I was the only one who liked the HIV clinic. That’s usually what happens — people come along and have a passion for the work,” Haas said. “You see that in the HIV world; it’s about being passionate.”

Haas bought Dr. Beal’s practice when he moved to Florida.

“Dr. Beal told me about a time they were having carpet installed in the office. When the guys came in and heard we treated AIDS patients, they didn’t come back after lunch,” she said.

“At hospitals, some staff wouldn’t serve them meals in the rooms. HIV patients were placed at the end of hallways and not checked on like other patients. They were totally isolated. There was no hope. It was a death sentence.”

By the late ‘90s, treatment revolved around antiretroviral therapy. But the medications had harsh side effects and required a regimen of sometimes 50 pills, and some patients built up resistance. The expense was enormous.

Organizations like Tulsa CARES sprung up to provide treatment and other wellness services; Hope Testing Clinic for HIV testing and interfaith groups provided advocacy. Catholic Charities was another early provider of housing and care for patients.

Haas and Beal worked to get patients into clinical trials because it “gave them a chance at possibly living,” she said.

By the early to mid-2000s, treatments included mixing different drugs for better outcomes. Patients with HIV started living longer, healthier lives. The FDA has approved more than 25 HIV drugs and one preventative daily use medication.

Credit has been given to the 1990 passage of the Ryan White HIV/AIDS program, administered by the U.S. Department of Health and Human Services, for building the infrastructure for research and treatment. Last year, $2.39 billion was allocated to the program.

“Most patients are on a one-pill regimen a day, and we don’t see resistance building up, and side effects are minimal, if at all. It’s also easier for me to get drugs for HIV than diabetes right now because of the Ryan White program,” Haas said.

AIDS has evolved into more of a chronic disease, treated with effective medications and a biannual visit to a specialist to check viral levels.

“I’m not worried about HIV; I’m worried about smoking or someone with a bad family history of premature heart disease or cancer,” Haas said. “I’m always trying to get to those problems early while at a treatable stage. My patients are getting older, and they have a normal life expectancy now.”

This doesn’t mean people shouldn’t worry about getting the virus. Drugs cost between $1,800 and $4,500 monthly, and patients require specialty care for life.

“It’s an expensive disease,” Haas said. “And it’s a worry on you. With every blood draw, there is a worry about, ‘What if I got resistance?’ The odds are against it. But, like a person who survived breast cancer, there is a worry even 10 years later when getting a mammogram. There is always a little fear.”

Prevention through wearing a condom, even with oral sex, and getting tested remain vital recommendations. It’s estimated that about 13% of U.S. residents with HIV don’t know it, meaning they aren’t getting treatment and may unknowingly spread it to others.

Haas is retiring at the end of the year. She plans to work part time in long-term care facilities and hospice care. She says she’ll still volunteer with AIDS and HIV organizations.

She keeps a file of thank-you notes from patients, and her husband, Murray Thibodeaux, has patients tell him how Haas saved their lives.

“You feel like you’ve done good in this world and made a difference in people’s lives,” Haas said. “It’s been a wonderful journey and something I never thought I’d do in my life. There were times I was down and it was tough.

“But I also met so many nice people. It is good just being part of the solution.”

Her life took a turn while sitting in a church, but she’s not a church-going person.

“It’s a personal thing. I talk to God several times a day, like having a friend there,” she said. “What this has done is made me much more accepting of other religions and lifestyles and not judging.

“I believe in God, and most of us have a central God. For me, God is a force or energy. I believe we need to follow the Golden Rule.

“His plan was to have someone help him, and it’s been such a blessing to me to see how it’s gone from a death sentence to a life sentence. I hope the same thing happens with other diseases like Alzhiemer’s.”

Percent of people with HIV who don’t know it: 13%

"If they’re going to create an environment where abortion is illegal, they need to own it. Show us that “pro-life” is more than a singular ethic. Mothers of the post-Roe future and their children need them to show up with more than words." says editorial writer Bob Doucette.

Column: Osage citizens were shaped, not defined, by the Reign of Terror

Editor’s Note: The following article reflects the personal views of the writer, which are not necessarily those of the Osage Nation.

Ginnie Graham: For parents watching their kids graduate, it's our rite of passage, too

"So much of parenting is about knowing when to get out of the way," says editorials editor Ginnie Graham.

Bob Doucette: For Southern Baptists, a reckoning over sexual abuse is overdue

When a sexual abuse scandal hits the church, words from its ministers can be indicative of how bad things really are. The reputation of the ch…

"We will all be taking different paths in our lives, so much is waiting for us after today," says Will Rogers High School valedictorian Stephany Ibarra-Gomez.

Column: Wanted: The next Ronald Reagan

"Today, sadly, neither party presents a compelling, unifying ideology to define their vision for a future that includes all Americans," say Sarah Chamberlain.

In this 2005 photo, Dr. Frances Haas interprets the result of a patient’s blood work to determine whether the HIV-fighting medications are still working.