There’s a buzz in the circles of women around the upcoming movie version of the groundbreaking 1970 Judy Blume book “Are You There God? It’s Me, Margaret” It’s a celebration, reflection and memory of a forbidden book.

The coming-of-age novel seems quaint today as the 11-year-old protagonist, Margaret Simon, crushes on the neighbor boy, questions faith and obsesses over her changing body.

It’s funny looking back at how I sneaked a well-used copy to a couple of friends whose parents wouldn’t let them read it. We were such rebels.

Also, it’s hard to truly ban a book, especially with kids and now the internet.

Blume’s book came along when too many parents didn’t want to talk with the prepubescent girls in a real way about their bodies, first kisses, first crushes, religion and how to deal with a period.

Some of the book is dated, considering how culture — and feminine hygiene products — have evolved.

The period product before the early ‘70s was a pad the size of a canoe held in place with a belt. It looks complicated and completely medieval. That description in the book went over my head at age 10.

The book obviously is free of the challenges social media ushered in with cyberbullying, predators and misinformation. A scene where girls swiped a Playboy to see what they might look like all grown up is tame compared to the graphic sex easily found online.

Despite some of the outdated references, the underlying insecurities and curiosities of girls haven’t changed. They are nervous asking for their first bra. They will stuff that first bra.

They worry about changing schools. They play it cool around a classmate they like. They want to be popular. They are concerned with how they look. They have girl drama.

They still need to know about inserting tampons or using a sanitary pad.

The young protagonist often talks to God, and that includes questioning faith — another universal human journey. The character struggles between choosing between her father’s Jewish faith and her mother’s Christian upbringing. That intensifies with peer pressure to decide. My favorite passage:

“I’ve been looking for you God. I looked in temple. I looked in church. And today, I looked for you when I wanted to confess. But you weren’t there. I didn’t feel you at all. Not the way I do when I talked to you at night. Why God? Why do I only feel you when I’m alone?”

Blume’s work normalized the chaotic feelings girls have growing up. She made it OK for those of us scared to ask questions. We found answers and no longer felt alone.

The New York Times named it an Outstanding Book its debut year, and Time Magazine placed the book on its list of Top 100 All-Time Novels written in English from 1923 to 2005. Scholastic named it among the 100 Greatest Books for Kids/100 Must-Read Books.

It is considered a classic in the canon of young adult fiction.

All this nostalgia ought to recall how it’s been targeted and banned by fringe conservatives. It remains one of the most challenged books of all time.

The book didn’t stir much controversy until the 1980s, coinciding with the rise of family values groups such as the Moral Majority and the Christian Coalition. Objections that attempted to keep the book away from curious eyes haven’t gone away.

Today, some adults are horrified at the idea of a girl looking at a Playboy. They don’t like how Margaret doesn’t feel moved by church or temple services. Some object to allowing her to choose her own faith. Her interest in boys apparently is troublesome.

The frank discussion about periods and breasts doesn’t sit well, even though puberty now starts earlier, hitting anywhere between 10 and 15.

Their answer has been to ban the book or make it harder for all kids to read. Sound familiar?

Culture wars start with censorship and scare tactics. It’s invoking a fear that words and images will somehow alter the fabric of society.

That fire-and-brimstone rhetoric is back as the fringe seeks to rid libraries of what they deem offensive. This recent uptick in trying to ban books targets work that give solace to youth who have been marginalized, such as Black children and LGBTQ+ youth.

Adults who are uncomfortable talking about race and gender — or who have a single-minded view — will label such books indoctrination and pornography. It’s the same tiresome arguments that have been waged for centuries. Censorship never ages well and only makes the books more popular.

Margaret Simon hasn’t gone away in more than 50 years. Her jump from page to screen evokes the same warm feeling as hugging your old high school best friend; the years of separation haven’t dampened the bond.

To honor this heroine who made me feel better at my most awkward time, I’ll do what I did then — read a banned book and pass it on.

Column: We are now entering new era with Chat GPT

"Chat GPT has moved us up a couple of levels to where understanding of material and analyzing relationships between concepts is now available on tap." says Akhilesh Bajaj.

Column: Tulsa is the center of a new 'homegrown' hub for tech ecosystem

"Local citizens can now start companies and scale them via a proven model thar other tech hub cities … have enjoyed for years if not decades," says Sean Kouplen.

Column: Get rid of bachelor's degree requirement for Tulsa Police

"My 1978 dissertation for my doctorate degree in education from the University of Tulsa focused on the relationship between college education and police performance," says Tulsan Jerry Griffin.

Column: How Oklahoma and tribal governments can get along

Ginnie Graham talks International Holocaust Remembrance Day with Chloe Kirk of the Jewish Federation of Tulsa. Why is education important for everyone, and where can people go for information locally?

"The dismissal and disbelief of Black women's pain and symptoms is an issue with no socio-economic boundaries and is fueled by the biases of health care professionals," says Reggie Ivey.

Are today's parents worried about the wrong things? | The Ethical Life podcast

🎧 The hosts discuss a recent advice column, in which a grandmother said she was losing sleep about her 9-year-old granddaughter walking home alone from school.

"In my experience, if someone doesn’t receive treatment immediately when they seek it, their chances of recovery are almost zero," says Kimberly Hill-Crowell.

Froma Harrop: The view from the suburbs looks bad for Santos and the GOP

Moderates are in the suburbs -- Democrats, Republicans and independents -- who want Washington spending kept in check. They tend to be liberal on social issues but pained over the extremes of the woke. They have respect for various sexual identities but little interest in learning new pronouns. And they overwhelmingly want some access to abortion. 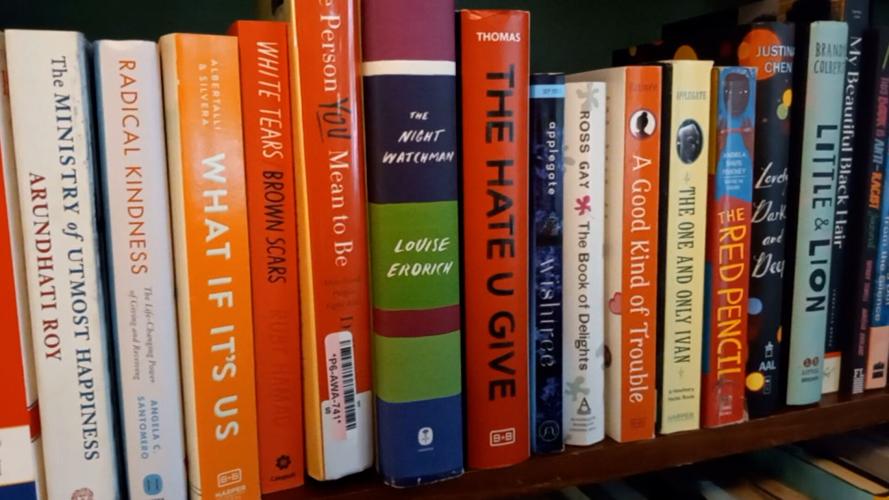 At least 50 groups have played a role in the recent movement to have books removed from schools, a PEN America analysis last year showed. For decades, Judy Blume’s “Are You There God? It’s Me, Margaret” made the most challenged lists.