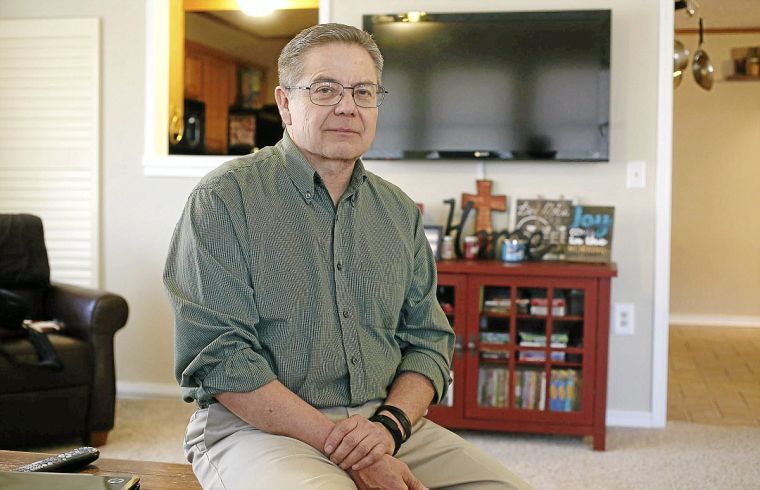 Bixby resident Michael Stick hosts a unique national support group that organically formed after people read his book “A Father’s Love.” Like himself, the members are dealing with the trauma of having a spouse killed by a child who was in a psychotic breakdown. 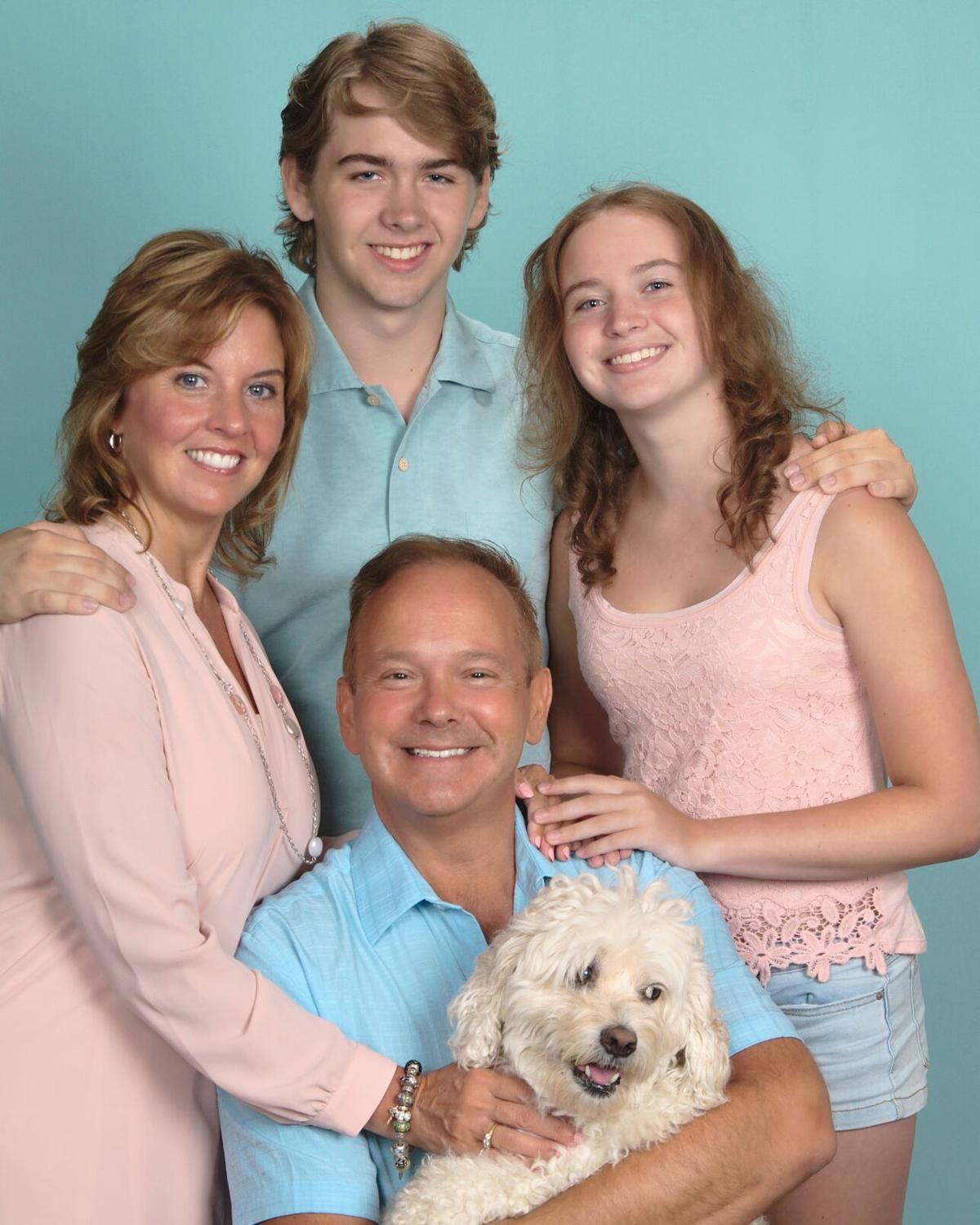 A family portrait of Patrick Murphy (center) of Massachusetts with his wife, Carlyn (left), son Sean and daughter. Last year, Sean had a psychotic breakdown leading to the stabbing death of his mother. Patrick is in a support group led by a Bixby resident of people who lost a spouse at the hands of a child during a mental health crisis.

Even through a computer screen, the affection between members of this tragically unique support group is obvious.

From across the country, they joke with each other about videos they’ve shared or lament needed home repairs. Some have met in person; some haven’t. Each month, they log onto Zoom for the 90-minute free meeting. For them, this is a lifeline.

It’s a group that sprung organically after they found Bixby resident Michael Stick, who has written and publicly speaks about the mental health crisis that led his son into stabbing his wife to death in October 2012 at their midtown Tulsa home. His son, Matthew, previously sought mental health treatment but could not get it. He was found not guilty by reason of insanity in June 2015.

After becoming stable in the Tulsa County jail in the weeks following his mother’s death, he has been symptom free since but remains in an institution for treatment.

Support group members know Stick’s story because it mirrors their own. Each is living through the trauma of losing their spouse at the hands of their children, who were lost in a break of their mental health at the time.

As host of the group, Stick lets others do most of the talking. As a Baptist preacher, he leans on faith but doesn’t proselytize in these settings. His gift is in having patience, listening and lending comfort.

“I don’t know how many people there are like us out there, but I hope there aren’t many,” Stick said. “We share a love for our sons, and we have the same backstory and that binds us together. I want to let others in our situation to know we are here for them.”

Patrick Murphy of Massachusetts doesn’t wait to be asked about his son, who stabbed his wife to death in 2019. He dives right in, describing the boy he raised and loves.

“He was the most non-violent person I knew,” Murphy said. “He was not violent. He was not a troublemaker. He never had behavior problems. At college, he was a very supportive and empathetic peer counselor. He’s a talented, intelligent writer who finished his four-year bachelor’s degree in three years, earned a certificate in film studies at the same time, and was in the process of writing a screenplay.

“This was completely out-of-character and out-of-the-blue.”

He’s quick to answer the sometimes unasked questions about his son’s mental health history to dispel myths. It’s a way to advocate for everyone to be aware of mental health; that problems may not fit a stereotype.

Sometimes, those questions might be seeking reassurance it couldn’t happen to them.

“This could happen to anyone,” Murphy says. “I’m still struggling with ‘Why me?’ In Michael’s book, he’s changed the question to ‘Why not me?’ but I’ve not made it there yet. I’m going from a family of four to dealing with this in an empty house while my daughter is away at school. I’m completely alone in a haze sometimes. With COVID, double that isolation.”

Most of the members contacted Stick after they found his 2018 self-published book “A Father’s Love.” It’s an unflinching perspective of what a psychotic breakdown is like for a sick person, although the book’s center is about getting through life as the surviving spouse and parent.

A friend gave Murphy the book after finding it online, but it took him 10 months to take off the plastic covering. Then, he couldn’t put it down and contacted Stick.

“When something like this happens, you have survivor’s guilt,” Murphy said. “Being a husband and father, I feel like I let them down. My whole focus, my whole job, was to take care of them and protect them. Mike’s story is the closest I have ever heard to what I’m going through.”

Tammey Raines Haucke of Oklahoma City watched an interview of Stick on public television and then reached out. Her son shot and killed her husband last year and was found not guilty by reason of insanity. Her son didn’t have health insurance and is now in the same facility as Stick’s son.

“I’ve cried every day for 643 days,” she said. “I’m so thankful we have each other. We have a positive dynamic, and there’s a big connection with these people.”

Their stories are not ones they share easily with others; it leads to awkwardness and judgement.

“People don’t understand that I still support and love my son,” Haucke said. “That is not the same son we knew, and I still love my husband. I lost my husband. But to not fight to save my son, it’s like I’m giving up on my husband and what he’d want me to do.”

Dealing with the shock of the death is one aspect, having to navigate the criminal justice system is the other.

Some find prosecutors not recognizing mental health needs or focused on getting a murder conviction. Some say judges can be blind to the science of mental health.

“We’re being victimized by the legal system,” Murphy said.

Upon a mention of having a sympathetic judge or prosecutor, Murphy jumps in with a correction.

“It’s not about sympathy,” he said. “We want judges who are knowledgeable about mental health — who can look, see and understand what mental health is and what it is not. This isn’t about finding sympathy.”

Haucke said her son’s attorney warned that if he were to be found not guilty by reason of insanity, he may end up in an institution longer than if he went to prison. But, in prison he may not get the treatment he needs.

“It came down to prison versus mental health,” Haucke said. “I was told he may never get out, and I hope that’s not the case. But he needed to get well. I knew he could get better.”

While frustrated by the legal system, they say it mirrors society’s approach to mental health, colored with shades of skepticism and blame.

Some members prefer to remain private. One day, they say, mental health advocacy in public policy will be a focus. For now, they aren’t ready; they are healing.

“I’m very protective of them,” Haucke said. “Because of Mike (Stick), my family has gotten bigger; that’s how I view this group. It’s good to know they are always there when I need them, even if it’s 2:30 a.m. “

On the morning of Black Friday, I was gathered with some friends at Turkey Mountain where the discussion drifted into how “political” things h…

Bixby resident Michael Stick hosts a unique national support group that organically formed after people read his book “A Father’s Love.” Like himself, the members are dealing with the trauma of having a spouse killed by a child who was in a psychotic breakdown.

A family portrait of Patrick Murphy (center) of Massachusetts with his wife, Carlyn (left), son Sean and daughter. Last year, Sean had a psychotic breakdown leading to the stabbing death of his mother. Patrick is in a support group led by a Bixby resident of people who lost a spouse at the hands of a child during a mental health crisis.