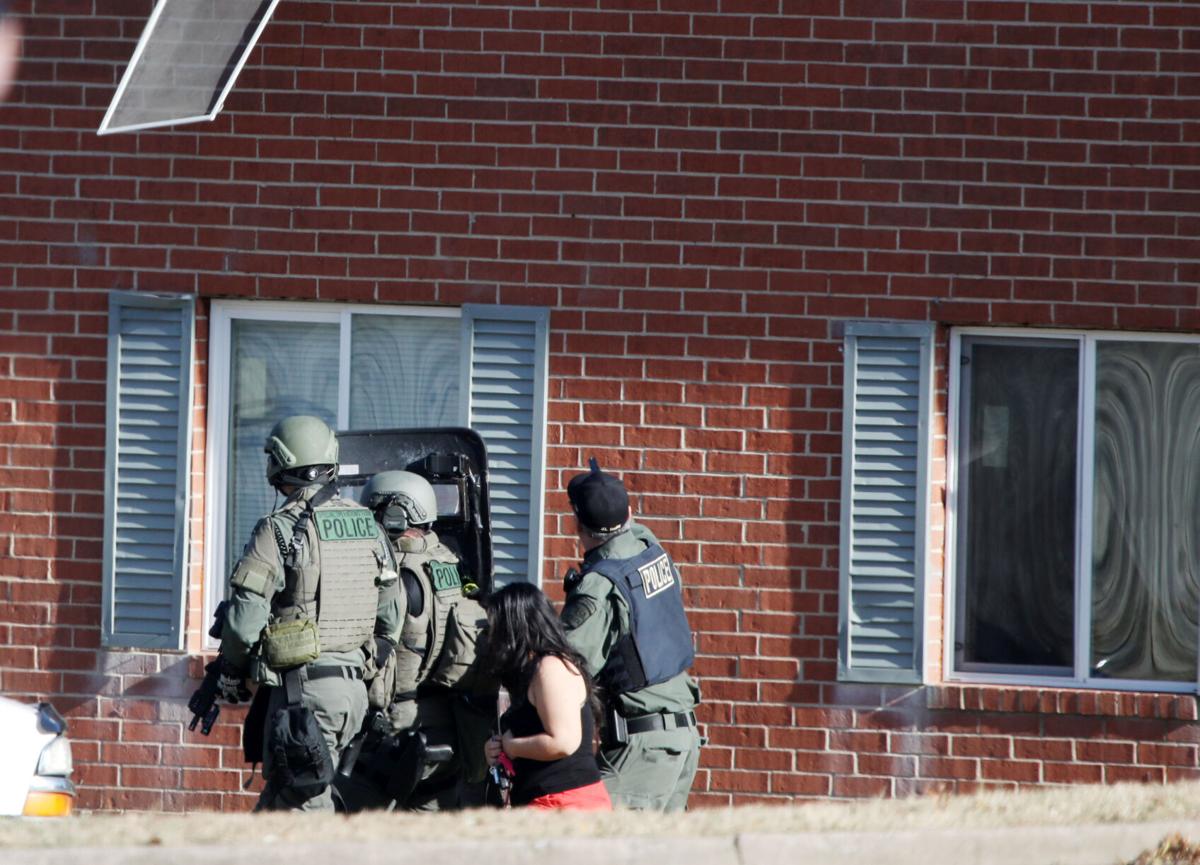 Tulsa police officers lead a woman past an area at the Colonial Park Apartments in the 7900 block of East 21st Street during a standoff with a domestic violence suspect in 2020. 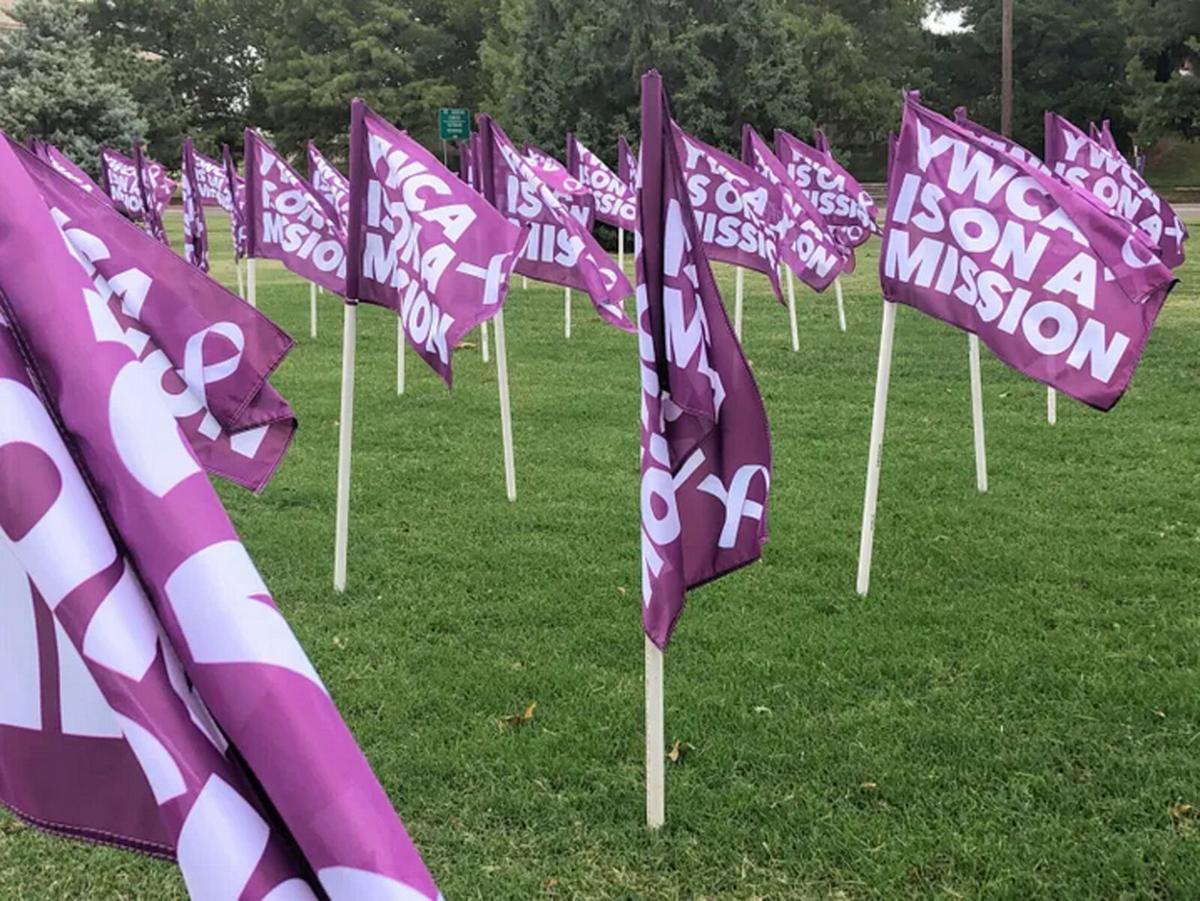 Every year, flags are planted on the south lawn of the Oklahoma Capitol to represent domestic violence victims who were murdered. In 2020, 61 Oklahomans died at the hands of their domestic abusers.

Within just a couple of weeks last February, two Tulsa-area families were impacted by familicide … losing children and mothers to murder and suicide by the children’s fathers.

Oklahoma consistently ranks high for domestic and intimate partner violence. A report just released “When Men Murder Women” from the Violence Policy Center in Washington, D.C., ranks Oklahoma No. 8 in 2019, a slight improvement in ranking from the previous year’s No. 3 spot.

The Oklahoma State Bureau of Investigation also released its report indicating that violent crime in Tulsa increased significantly in 2020, in particular domestic abuse related crimes. Why?

A perpetrator already owns issues with power and control. Add to that the traumas of COVID, unemployment, fear of housing loss and eviction, homeschooling and stay-at-home constraints.

Suddenly, perpetrator control over a victim and the environment they share disappear.

The result: increased violence and lethality. A victim feels even more powerless.

I guess you could say it was predictable. Tulsa is not alone, and the rest of the country reflects numbers supporting this hypothesis.

We can’t easily explain why Oklahoma is more violent than states facing the same issues the past year. We can point to innovative policy changes, creative resource availability, and, ultimately, ongoing interest to substantially address these challenges going forward.

In 2019, Family Safety Center staff and our partners provided 18,341 services to more than 7,600 unique adult survivors and 2,000 of their children. When COVID entered the picture in March 2020, we were on track to surpass those numbers by a significant amount.

More people than ever were aware that services and resources were available and sought them out. Then, the pandemic hit with all of its fallout.

Actual access of services by clients dropped by 50%. Yet, according to the OSBI, numbers of cases reported in Tulsa County increased substantially.

A recent Oklahoma Watch report found the state hit a nearly 20-year high in the number of domestic violence incidents last year, at 27,089 cases. Of those, 80% were assault and battery and 61 Oklahomans were murdered by their abuser.

How can we make a difference in all this?

Here are a few of the significant changes that started in 2020 that will help.

The dedicated Tulsa County Court domestic violence dockets hold offenders accountable through judicial monitoring. For those exposed to COVID, virtual reviews are conducted. Currently 71% of felony-docket defendants are compliant with sentencing as are 68% of defendants on the misdemeanor docket.

Protective order court is stressful, at best. But during the past 18 months, a virtual court has allowed litigants to appear before a judge, reducing the trauma felt by survivors when in close contact with a perpetrator.

When survivors in violent cases are afraid to testify in criminal court, prosecutors now frequently use a tool called “evidence-based prosecution.” It relies more on evidence and good investigation than a victim’s testimony, and they are winning.

Recognizing 80% of our survivors experienced non-fatal strangulation — considered by research as the last warning shot before homicide — the Tulsa Police Department created policies to better inform victims at the time of the incident and to follow up with them afterwards. The follow up encourages them to visit a hospital or Family Safety Center for assessment by our strangulation nurse experts.

One of those nurses at the Family Safety Center is also trained to provide on-site basic traumatic brain injury assessment.

Tulsa police also created the Domestic Caution Indicator. It that puts a perpetrator missing at the time of a responding officer’s arrival in a database for 72 hours that allows for arrest on a probable cause, if stopped for another crime.

TPD added a second sergeant to a team of seven detective and supervisors to provide more rapid evidence collection and resolution of cases. This is to help alleviate the heavy caseload (about 150 cases each) carried by the department’s Family Violence Unit.

We are seeing differences that only teamwork can make. We see increasing community-wide interest at leadership and policy levels in providing more resources, improving access to justice and reaching under-served populations.

There are no simple answers to violence in our relationships and community, but there are pathways to solutions and hope.

Here’s your call to action. It’s hard work, and we have to pay attention.

From fellow Tulsans, we need awareness to continue year round. Be in-the-know and pay attention to friend and family relationships that may be in crisis.

Reach out by offering to connect victims to help when they’re ready. Seek out policymakers and encourage them to keep making positive changes including expanded funding to reverse a horrible trend. Recognize it’s important every day.

It takes all of us to end a culture of violence and abuse. Together, we can.

Suzann Stewart is executive director of the Family Safety Center and a former member of the Tulsa World Community Advisory Board.

Tulsa police officers lead a woman past an area at the Colonial Park Apartments in the 7900 block of East 21st Street during a standoff with a domestic violence suspect in 2020.

Every year, flags are planted on the south lawn of the Oklahoma Capitol to represent domestic violence victims who were murdered. In 2020, 61 Oklahomans died at the hands of their domestic abusers.