Federal law prohibits members of Congress from using insider information to make stock trades. But there are gaps in the law and ambiguities in how lawmakers make investments, prompting some in Congress to call for banning lawmakers from trading stocks at all while in office.

House Speaker Nancy Pelosi is not in favor of legislation that would clamp down on members of Congress making stock trades.

Every so often, stories break about how members of Congress make large stock transactions at seemingly opportune times.

Deep research goes into making trades, with investors hoping to capitalize on the good fortunes of some companies or back away from firms that are about to take a hit. But there are rules against trading stocks based on insider information.

If public officials are making trades based on nonpublic information they’ve learned while in office, some might question whether their votes are based on profit rather than the public good. Capitalizing on information not available to the public can be seen as unfair to less privileged investors. Insider trading in the financial and securities industries is illegal.

But there is a lot of gray here, especially when it comes to members of Congress. A couple of examples from Oklahoma bear that out.

Kevin Hern, who represents Oklahoma’s 1st Congressional District, and his wife were reported last month by Business Insider to have purchased $30,000 worth of stock in Raytheon and Lockheed Martin at the same time Hern was calling for higher defense spending.

The two companies are major defense contractors, and business is booming as the Pentagon’s budget swells. The companies also make a lot of the weapons the U.S. is sending to Ukraine, and U.S. aid to that country has ballooned to $8.8 billion under the Biden administration.

Hern’s family trust also bought stocks in energy firms, including Devon Energy, Williams and ExxonMobil at a time when Hern was pushing for more oil and gas drilling.

It would be unfair to pick on Hern alone. Similar barbs have been aimed at U.S. Sen. Jim Inhofe. In January 2020, he sold about $750,000 worth of stocks just before the COVID-19 pandemic caused U.S. markets to take a months-long nosedive.

Senate colleagues Kelly Loeffler and Richard Burr were among others who made timely transactions concerning stocks that would tank as markets tumbled or take off in the rising world of remote work. The two senators sat on committees in which they were getting extensive closed-door briefings on disruptions the economy would face as the pandemic worsened, gaining knowledge that wasn’t yet public.

Similar moves were made by other members of Congress just as they were learning secret details of the coming financial crisis of 2008.

Are these instances cases in which lawmakers profited from information not available to the public? It would seem that way, but for decades it wasn’t illegal. Even with laws now on the books to curtail congressional trading advantages, there are holes.

A big one: plausible deniability.

A Hern spokesman told Business Insider, “Congressman Hern doesn’t have any management or day-to-day control over his stock purchases or his businesses, in line with recommendations from the House Ethics Committee.”

Inhofe attributed his 2020 stock sale to a desire to get out of securities because of the questions they bring.

“I did that because, if you own stock, people think everything is self-serving,” he said at the time.

Lest anyone think this is a partisan issue, it’s not. The Democrats’ highest-ranking lawmaker, House Speaker Nancy Pelosi, was asked about her and her husband’s stock deals in 2012.

In that case, the Pelosis in 2008 were allowed to buy 5,000 shares in Visa’s initial public offering at $44 a share. At the same time, legislation was working its way through the U.S. House of Representatives that could have been damaging to credit card companies’ fortunes.

That legislation stalled in the House, and the Visa share price went up to $64, earning the couple a tidy profit.

Pelosi, who was in the midst of her first stint as House speaker, denied any conflict of interest in that transaction when asked about it by a “60 Minutes” reporter. But as speaker, she held ultimate sway over what legislation got heard.

One might say that smacks of insider trading. But at the time, what the Pelosis and many others did was not illegal. Members of Congress were exempt from insider trading laws.

Incidents like this led to passage of the Stop Trading on Congressional Knowledge Act in 2012, which mandates that members of Congress disclose their trades and prohibits the use of nonpublic information for private profit, including insider trading by lawmakers and other government employees.

But the law, known as the STOCK Act, isn’t ironclad. Lawmakers routinely say they are uninvolved or infrequently involved in their investments. As long as they’re complying with the law’s disclosure rules and other provisions, it’s difficult to say whether insider trading is still happening, barring more thorough investigations of trades and communications between lawmakers and their brokers.

Tyler Gellasch, who helped write the language in the STOCK Act, acknowledged as much, writing in Politico that the law doesn’t go far enough.

“Congress should consider prohibiting significant outside business activities for all members, and limit any securities trading to diversified funds, with all trades first precleared by an appropriate ethics office,” he wrote. “That kind of process is common at investment banks and other firms where employees are often in possession of material, nonpublic information.

“Many compliance officers at companies like those sometimes even conclude that insiders ought to be prohibited from trading in entire industries. We should expect at least as much of members of Congress.”

If such reforms came to pass, that would preclude members of Congress from trading stocks that might be affected by decisions they make in office.

Legislative efforts to accomplish this are underway. Senate Bill 3494 would force lawmakers to either divest their portfolios or put them in qualified blind trusts — investment vehicles in which a trustee makes trades without the trust owner’s knowledge.

Fines for violations would be up to a month’s salary per incident.

Senate Bill 564 would forbid lawmakers and their senior staff from trading stocks while in office.

And in the House, similar legislation would forbid members of Congress, their staff and possibly their spouses from trading stocks.

But the fate of these proposals is murky. The Senate bills failed to advance before the chamber’s summer break, and senators likely will be consumed with reelection and not legislating this fall.

In the House, expect a fight that could expose the lingering rift between progressives and the House speaker. Pelosi signaled in December that she hasn’t warmed to the idea of cutting Congress out of the investment game.

“We are a free-market economy,” she told reporters in December, as quoted by Newsweek. “(Members of Congress) should be able to participate in that.”

Bob Doucette: Four questions about the FBI's search of Mar-a-Lago

A lot can happen in an hour or two. Monday night sure proved it.

Bob Doucette: Today's anti-government rhetoric dangerously close to that of 1995

On a bright weekday morning, I was driving west on Interstate 40 to my job at a weekly newspaper in Moore. My radio was tuned in to a rock sta…

Ginnie Graham: Back to school is getting more expensive

"Teachers will spend on average $820.14 on materials for their students this year, according to the education site My eLearning World." says Editorial editor Ginnie Graham.

Column: Tulsa has so much good in Goodwill

The Health and Human Services Department recently made news with a report touting that “National uninsured rate reaches all-time low in early 2022.” Sounds encouraging, but look beneath the covers and what you find is a quiet but enormous shift from private to government-subsidized coverage.

"The remarkable results around this election show that advocates and activists for reproductive rights are speaking out and standing up."

Federal law prohibits members of Congress from using insider information to make stock trades. But there are gaps in the law and ambiguities in how lawmakers make investments, prompting some in Congress to call for banning lawmakers from trading stocks at all while in office.

House Speaker Nancy Pelosi is not in favor of legislation that would clamp down on members of Congress making stock trades. 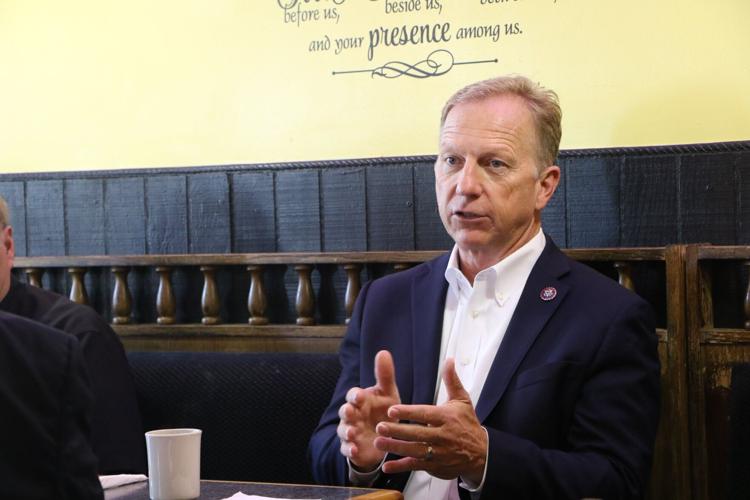