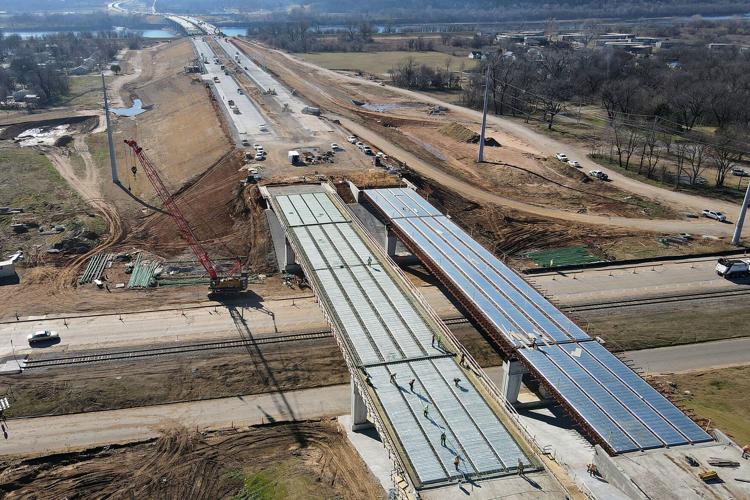 A 5-mile extension of the Gilcrease Expressway will likely open late this summer. Here crews finish building massive bridges across the Arkansas River, visible near the top of this photo, and work to connect it to other parts of the turnpike being built west of downtown Tulsa. 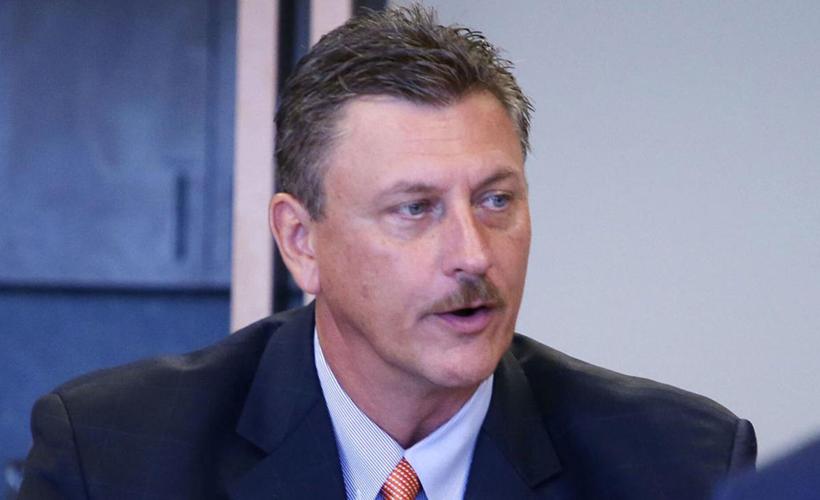 State Transportation Secretary Tim Gatz says he anticipates the need for Oklahoma’s turnpikes will only grow in the future.

At some point in September, we’ll be watching football and counting the days before the summer heat finally relents.

Oh, and one more thing: Barring any unforeseen delays, drivers will be able to use the Gilcrease Expressway to cross the Arkansas River.

The Gilcrease’s opening has been a long-sought and expensive goal for state, county and city leaders. Five miles, four lanes and 22 bridges later, a trip that once might take a half hour will now last all of five minutes.

That latter figure has some people grousing. Of all the turnpikes in the Tulsa area, the Gilcrease will be the priciest. But there are other ways to look at it that might soften the blow.

Time is money. The more time you’re on the road means less time to do something else. And more time on the road is more fuel burned. When I went by a gas station down the road from me, the 87 octane fuel I put in my car was $4.37 a gallon. That’s down 12 cents from a week ago, but yikes. Suddenly those two bucks seem like a bargain.

These kinds of cost comparisons point to the present. But what struck me about Oklahoma’s turnpikes is how these roads inform the future.

State Transportation Secretary Tim Gatz dropped by the Tulsa World to talk about the Gilcrease, but those discussions eventually ventured into where he sees the future of transportation going.

In terms of the Gilcrease, plans are already being made for housing and business developments along its corridor. The western edge of the Tulsa metro area has long been underdeveloped, despite the scenic appeal of the Osage Hills and the woodlands they host.

Destinations like Chandler Park, the Gilcrease Museum and the Tulsa Botanical Gardens are missed by many Tulsans because getting to these places is more involved than, say, going to Turkey Mountain, the Philbrook Museum of Art or Woodward Park.

Highway accessible housing developments out west could solve other problems. Tulsa, like many cities, is seeing a housing crunch that is driving up home prices and rents. A bigger inventory of homes might mitigate that issue, especially if potential home buyers know that their trip from driveway to workplace is an easy commute.

Opportunity is also being seen on the proposed northern leg of the Gilcrease. North Tulsa could see a boom in business development once that vision is realized, something not lost on investors who are eyeing and buying property there. More jobs and services on Tulsa’s north side have been a long-term challenge that the turnpike could unlock.

Beyond the Gilcrease, things get futuristic. It won’t be too long before the Turner Turnpike, which connects Tulsa and Oklahoma City, is six lanes the entire way. But looking ahead, planners made an extra-wide shoulder for the day that the Turner might be eight lanes.

Why go that far? Simple: to accommodate self-driving vehicle traffic. More specifically, self-driving trucks used by major shipping companies that are actively pursuing the technology as a way to cut costs.

Self-driving trucks pulling as many as five trailers would be a hazard for other drivers, but if such traffic had its own dedicated lane, it would help shippers transport cargo and stay out of the way of the rest of us.

We’re still a ways off from seeing fleets of self-driving trucks (or passenger cars, for that matter) hitting the road, but technology companies like Amazon and Tesla are committed to the idea. For them, it’s not a side project, but a business plan. In Gatz’s estimation, Oklahoma needs to prepare its most heavily-used roads for the day when driverless rigs become common.

The turnpike system isn’t just looking ahead. In some cases, it’s attempting to fix errors of the past.

We’re seeing that play out in the Oklahoma City area. The city has three interstate highways running through it, with Interstate 35 being the busiest. Transportation officials knew that it would need to be widened, but it has taken decades to finally reach a goal that was set in the 1970s.

Since then, the city has grown substantially. Development has encroached on the I-35 corridor to the point where there isn’t room to widen it any further. But the traffic is only getting heavier and the urban sprawl wider as Oklahoma City’s growth accelerates.

State transportation officials are planning to extend the Kickapoo Turnpike, which currently runs from Interstate 44 south of Luther to Interstate 40 near McLoud, south and west through Cleveland County. An east-west leg would connect the turnpike to I-44 north of Newcastle, while the main north-south line would skirt the west side of Lake Thunderbird before connecting with I-35 south of Noble.

A group of Norman residents aren’t happy with the plan, but the Oklahoma Turnpike Authority is moving ahead. A completed Kickapoo Turnpike would divert traffic away from Oklahoma City’s busy core and around congested lanes that are prone to gridlock between downtown Oklahoma City and Norman’s southern limits.

Similar complaints have come with other turnpikes that were designed to relieve congested traffic, but in time, drivers accepted them. The alternative, according to Gatz, is the type of traffic snarls common to places like the Dallas-Fort Worth metroplex.

If the Kickapoo goes through and functions as planned, it could go a long way toward alleviating a major headache for motorists, especially those driving from Tulsa to Dallas.

Still, no one is joyous over having to pay tolls. When the Turner Turnpike was opened in 1953, it was planned that the tolls collected from drivers would pay it off later. Once that was done, the Turner would be like any other highway.

Nearly 70 years later, Oklahoma has an abundance of toll roads, and they’ll never be free. If that grates on you, consider this: If you get a PikePass, it’s a lot like buying a subscription service. You pay a little as you go – all voluntarily – and you get there faster than was otherwise possible.

Is the convenience worth it? That’s up to you to decide. But history tells us that drivers think they are, especially in the state’s two metro areas. Plenty of motorists are taking the on-ramp to the Turner, Creek and Kilpatrick turnpikes now, and a good number of Oklahomans are betting on the Gilcrease Expressway enjoying similar success.

As long as more people keep working, living and playing in this part of the city, the market will eventually take notice and prompt change, says Bob Doucette.

Column: Thanks to organ donors for giving life

I just stop to sense the world around me. It is a moment of escape from the whirlwind, to refocus my attention, says attorney Sarah C. Miller

🎧 Episode 65: The hosts discuss the tricky balance of holding people accountable for their actions but the danger in taking things too far.

David Silverman, an expert in early American and Native American history, discusses the history of Thanksgiving.

Cartoon: Leave No One Hidden

A 5-mile extension of the Gilcrease Expressway will likely open late this summer. Here crews finish building massive bridges across the Arkansas River, visible near the top of this photo, and work to connect it to other parts of the turnpike being built west of downtown Tulsa.

State Transportation Secretary Tim Gatz says he anticipates the need for Oklahoma’s turnpikes will only grow in the future.