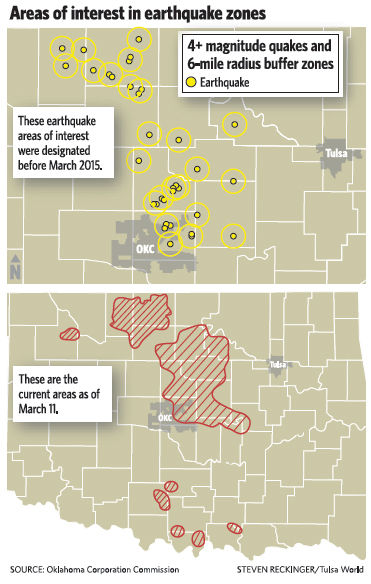 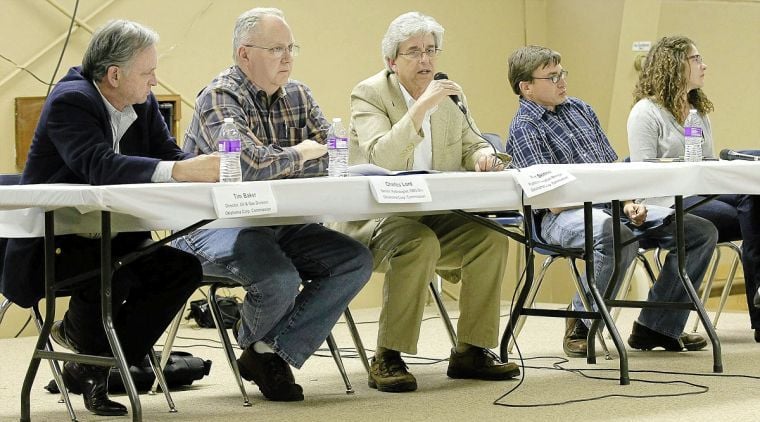 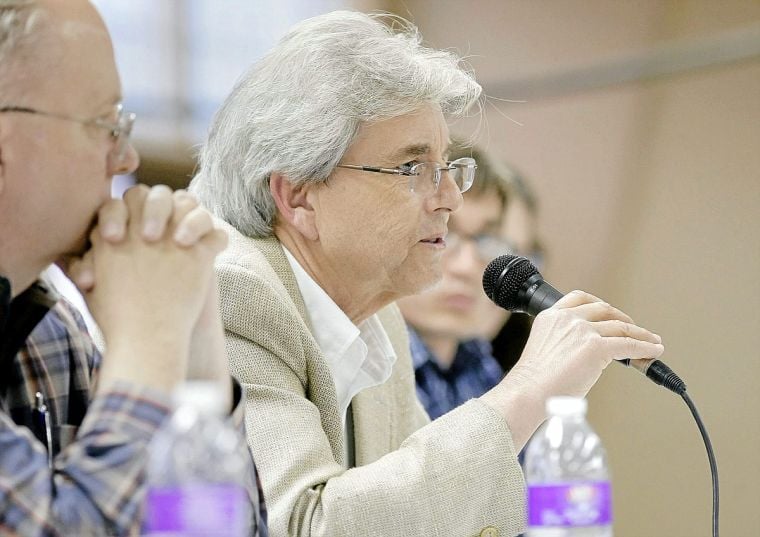 Matt Skinner, spokesman for the Oklahoma Corporation Commission, answers questions from the audience during last week's meeting of area residents on the increasing earthquakes in the Medford area. MICHAEL WYKE/Tulsa World 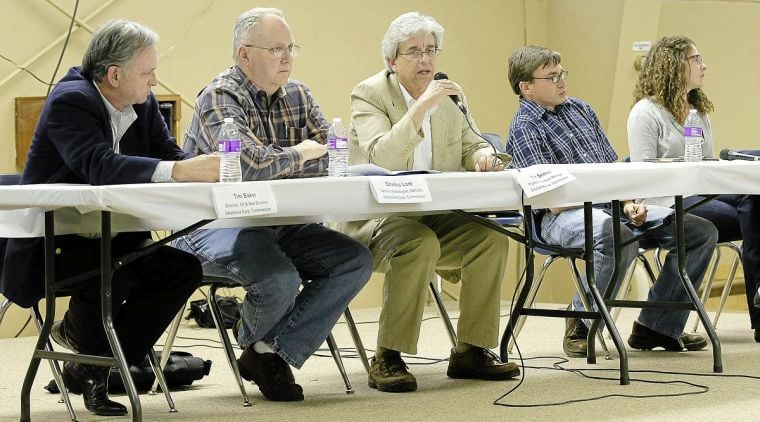 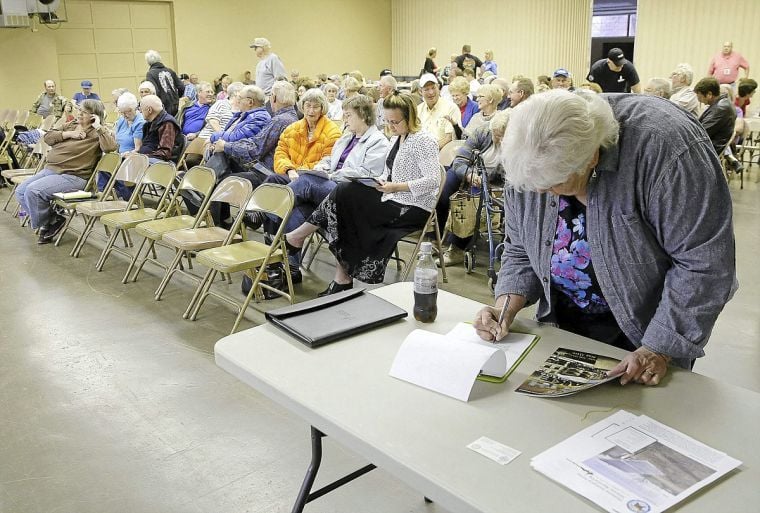 Medford-area residents sign in and take seats at a meeting last Wednesday about the increasing earthquakes in the area. MICHAEL WYKE/Tulsa World 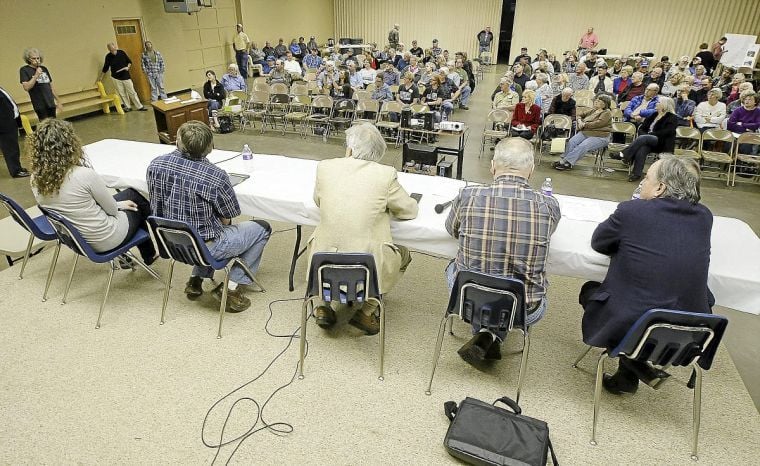 Read the Tulsa World’s series on the state’s earthquake problem.

MEDFORD — State officials are expanding the number of counties included in earthquake “areas of interest” and have told nearly 100 companies to prove that their oil and gas waste-water disposal wells are not too deep.

Officials with the Oklahoma Corporation Commission detailed the new requirements during a town hall meeting in Medford on Wednesday evening. The small town in Grant County near the Kansas border has been plagued with frequent earthquakes linked to oil and gas disposal wells.

More than 100 people from the area packed into the Medford town hall to view presentations from state officials and to ask questions about the issue.

“We are having more earthquakes than California. This is quite out of the ordinary for Oklahoma,” Holland said.

He said the huge increase in the state’s earthquakes “is very unlikely to be naturally occurring.”

Holland provided tips for avoiding injury during earthquakes and explained how the state is monitoring them throughout the state. The state has more than 20 seismic monitoring stations, some operated with the U.S. Geological Survey, and is adding more, he said.

Matt Skinner, a spokesman for the Corporation Commission, told residents that the agency is sympathetic to the impact of frequent earthquakes on the area.

“I can read a map. I know how horrible it has been here,” he said.

However, some at the meeting said the state wasn’t doing enough to deal with earthquakes triggered by oil and gas disposal wells.

“We have had 208 earthquakes here. We are on a scale to have 800 to 900 this year. Do you consider that a success for your programs?” asked Bob Jackman, a Tulsa-based petroleum geologist who has compiled studies on the issue.

Skinner explained that the state’s new practices shift the focus from a strictly well-based approach to one that takes into account all wells in certain areas.

The commission will now include areas of the state experiencing “seismic swarms” — multiple earthquakes occurring close together — in its system of regulating waste-water disposal wells. The change more than doubles the number of counties in the state’s “areas of interest,” where well operators have been directed to reduce disposal volumes if earthquakes continue to occur.

“It puts us on a footing where we are looking at a broader scale and gives us more of a wider reach, if you will, for whatever the next step has to be,” Skinner said during an interview with the Tulsa World before the meeting.

Last year, the state experienced 585 earthquakes of 3.0 magnitude or higher, more than in the past 35 years combined. That figure earned Oklahoma the title of the most seismically active among the contiguous 48 states.

Because numerous scientific studies have linked earthquakes with oil and gas waste-water disposal wells, the state is moving to limit wells suspected of posing the greatest threat.

To come up with the new map, officials drew a six-mile circle around the center of any area experiencing seismic swarms. (A swarm is defined as two or more earthquakes occurring within a quarter-mile of each other, one registering at least 3.0 in magnitude.)

Starting last week, the commission sent letters to 92 companies holding permits to operate waste-water disposal wells in the areas of interest. The letters direct the companies to provide evidence that their wells are not at a depth most likely to trigger earthquakes — at or just above the granite “basement” layer of rock.

Since 2010, the volume of oil-field waste water injected annually in Oklahoma increased 35 percent to 1.1 billion barrels, a World analysis shows. That is equal to the amount 576 petroleum supertanker ships could hold.

The wells dispose of toxic, salty water produced during oil and gas drilling operations by injecting it deep into the ground. About 3,200 such wells are active in Oklahoma.

While the Corporation Commission already has the ability to direct well operators to “plug back” if their wells are too deep, its staff had to sift through hundreds of reports to find those wells.

“The problem is we don’t have the resources to go through everybody’s report,” Skinner said. “Every time there’s a new earthquake, it pulls everybody off in a new direction.”

The letters direct operators in the areas of interest to “plug back” their wells if they extend to the basement layer of rock or the layers of sand and granite wash just above it.

“It’s a way of quickly picking what some seismologists call the low-hanging fruit,” Skinner said.

The new measures do not go as far as the state of Kansas has recently gone in response to a growing number of earthquakes there.

After a hearing last week, the state of Kansas issued orders to waste-water disposal well operators in parts of two counties to reduce their volume significantly, by up to 60 percent in some cases. Harper and Sumner counties, just over the Oklahoma state line, are experiencing a large increase in earthquakes as the number of injection wells has increased, according to the Kansas Corporation Commission.

The Kansas commission said it was required to take the steps “to protect the public from immediate danger to health, safety, and welfare.”

While the new earthquake measures may be welcome news in Medford, “we don’t expect anybody to stand up and applaud,” Skinner said.

Grant County had 1,071 earthquakes of all magnitudes last year, more than one for each of the 990 people in Medford, its county seat.

“Statistically, the chance is very good that while we are having that meeting there we are going to get hit,” Skinner said. “In terms of an announcement, it will simply be part of a Powerpoint presentation.”

Matt Skinner, spokesman for the Oklahoma Corporation Commission, answers questions from the audience during last week's meeting of area residents on the increasing earthquakes in the Medford area. MICHAEL WYKE/Tulsa World

Medford-area residents sign in and take seats at a meeting last Wednesday about the increasing earthquakes in the area. MICHAEL WYKE/Tulsa World