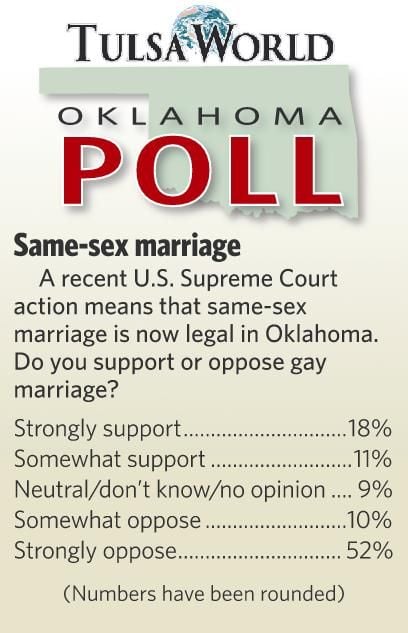 Same-sex marriage may be more acceptable to Oklahomans than it was a decade ago, but the most recent Oklahoma Poll indicates that a large majority still rejects it.

More than half the 404 likely voters surveyed said they “strongly oppose” same-sex marriage despite recent court decisions that have made it legal in Oklahoma. Another 10 percent said they “somewhat oppose” it.

“We’re getting where a small group of people are wanting to run things their way above the other people,” said Jerry Lane of Muskogee. “What about the rights of the other people who live in this country? After we voted (against same-sex marriage) in 2004, it was all struck down by a minority of people.

In 2004, Oklahomans voted more than 3 to 1 in favor of a constitutional amendment defining marriage as the union of one man and one woman.

The 62 percent opposing same-sex marriage in the Oklahoma Poll is markedly less than the 76 percent that voted against it 10 years ago but still a substantial majority.

That included about 25 percent of those who oppose same-sex marriage.

“I don’t really know what the long-term effect will be, but I’m against it,” said L.C. Goodrich of Whitesboro. “I’m a Christian. I believe marriage is one man and one woman.”

“If you know someone personally who is gay, you probably have a better understanding,” said Tulsan Paula Haight. “I think part of (the opposition) is prejudice, and prejudice is fear. The more you know about something the less you fear it. A lot of people don’t know anyone who is different from them.”

Haight is among the minority who believes same-sex couples should have the same rights as heterosexuals.

“If two people love each other and are willing to make the kind of commitment that marriage requires, they should be allowed to do so,” she said.

For marriage equality advocates, the encouraging news is that respondents under 45 were two to three times more likely to strongly support their cause than to strongly oppose it.

Those under 45 were also up to three times less likely to strongly oppose same-sex marriage than those over 45.

Democrats were about twice as likely as Republicans to support same-sex marriage, but a little more than 50 percent still opposed it. Even among those surveyed who considered themselves “somewhat liberal,” 39 percent were strongly opposed to same-sex marriage and 44 percent thought it will have an extremely negative effect.

Respondents in the two major urban areas were more likely to support same-sex marriage and less likely to oppose it than the rest of the state. Forty percent of those in the 5th Congressional District, where openly gay Democrat Al McAffrey lost to Republican Steve Russell earlier this month, supported same-sex marriage.

Curiously, single women and married men were much more likely to support marriage equality than single men and married women. Single men, particularly, rejected it, with only 18 percent in support and 70 percent opposed.

The poll of 404 likely voters registered in Oklahoma was conducted Oct. 25-29 by SoonerPoll.com and included 136 cellphone and 268 landline users. The poll was sponsored by the Tulsa World. The margin of error is plus or minus 4.87 percentage points.

Poll results were weighted by age, gender and congressional district, stratified by Oklahoma likely voters statewide. This poll conforms to the Standards of Disclosure of the National Council on Public Polls. A complete description of the methodology can be found at soonerpoll.com.

The other driver, a Wagoner woman, was admitted to a hospital for observation.