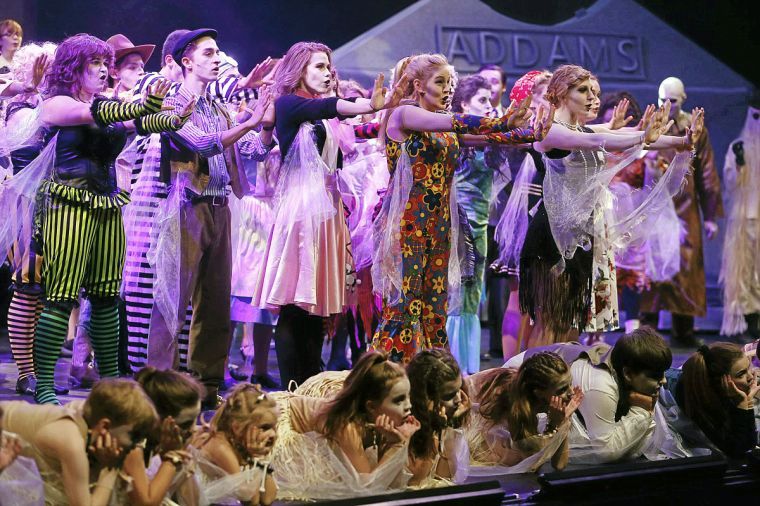 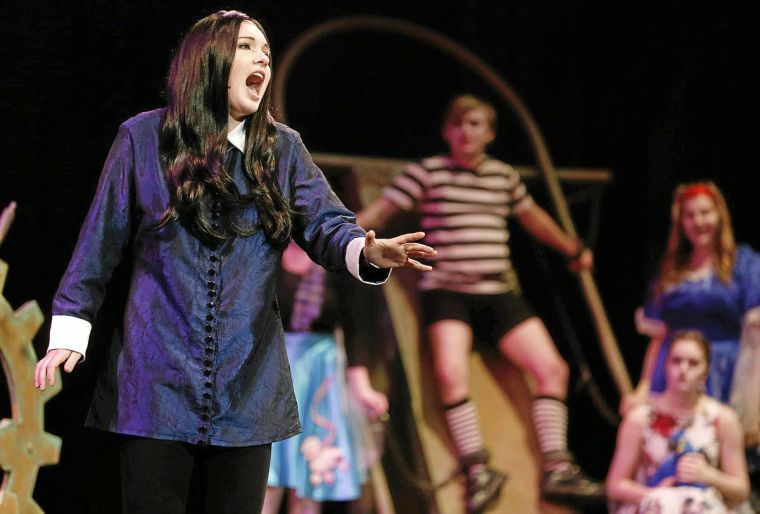 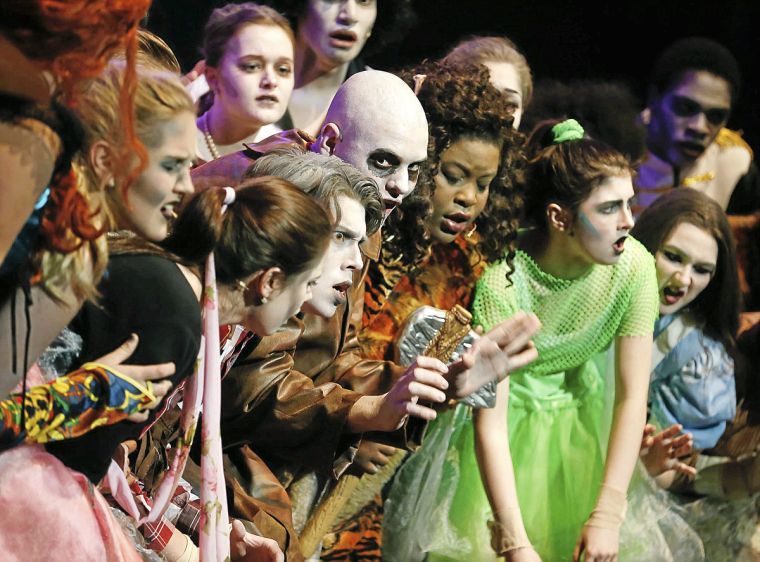 Students including Scotty Jirik (center), as Uncle Fester perform during a dress rehearsal for The Addams Family at Union High School in Tulsa, Okla., on January 28, 2015. JAMES GIBBARD/Tulsa World 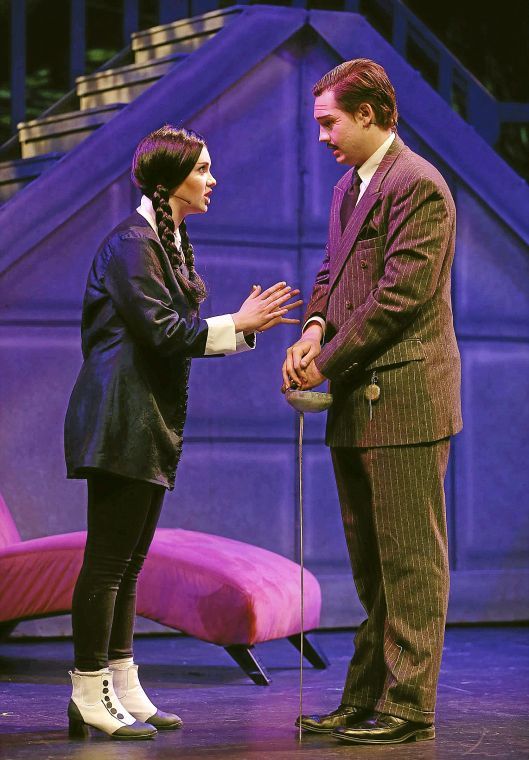 Students Ruby Shadley as Wednesday Addams, and Tyler McCoy as Gomez perform during a dress rehearsal for The Addams Family at Union High School in Tulsa, Okla., on January 28, 2015. JAMES GIBBARD/Tulsa World 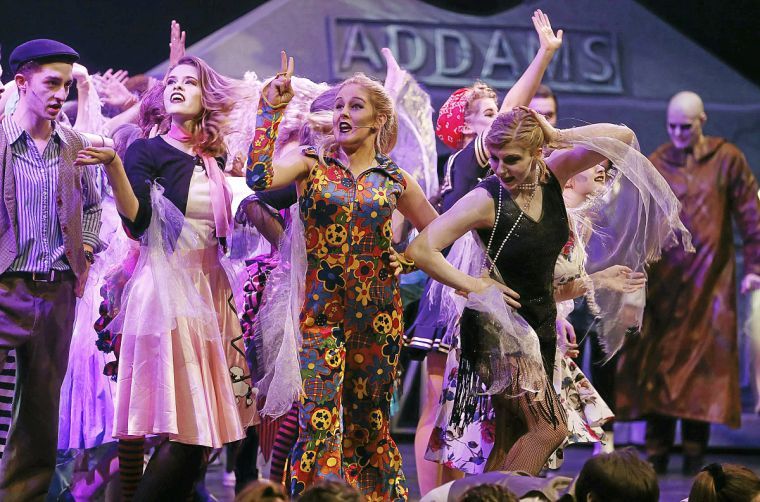 Ruby Shadley first got involved in drama at Union when she was in sixth grade.

Her choir teacher told her to audition for that year’s musical, “Les Misérables.” So she did, and she got a part.

About seven years later, she has one of the lead roles in Union High School’s upcoming production of “The Addams Family,” and she says her involvement with the theater program has changed her life.

Shadley, 17, said being a part of the program has also helped her deal with tough times at home.

“In sixth grade, a lot of things started to get weird at home,” she said. Her parents got divorced, and she felt that her theater family was an anchor.

“I had a goal to strive for,” she said. “It’s very difficult to get lost here.”

It’s reasons like these that Union officials are glad to see the number of engaged students rising.

Union Superintendent Kirt Hartzler said these numbers are exciting for the district.

“I’ve never in my 29 years in this district seen as much engagement as we have today,” Hartzler said.

Hartzler attributes the rise partly to the district’s move three years ago toward smaller learning communities. This model involved changing the structure of the 6th/7th grade center, as well as the high school, to assign administrators and counselors to each class, rather than to the site as a whole.

That means that a principal, assistant principals and counselors serve groups of about 450 students at those two sites.

“Part of creating a smaller learning community is obviously trying to increase the personalization that we offer our kids,” Hartzler said.

The model has allowed administrators to get to know kids as more than just “a student number,” he said.

“They get to know their stories, they get to understand what type of social, emotional and academic supports they need,” Hartzler said.

Hartzler said that along with this personalization, administrators started to “proselytize.”

“We started to tell them, ‘What are you involved in? You don’t just want to be a student at Union. You want to get engaged in something ... What else are you doing for yourself to enrich your experience at Union?’ ”

And based on the numbers, the message seems to be getting across.

Educators say research has shown a high correlation between student engagement, including through extracurricular activities, and academic achievement.

Hartzler says that is true at Union. For example, for the last three years, 100 percent of students who are in the district’s high school athletics programs have passed their end-of-instruction exams.

“None of my kids have grade issues,” he said.

Engagement in extracurricular activities at school helps students develop confidence, Hartzler said, which may be part of the reason they perform better academically.

“I didn’t really know how much I’d need it before I was in it,” Rutherford said. “Around the beginning of my freshman year, I kind of got in, like, a rough place. I struggled a lot with self-confidence, and feeling like I belonged or feeling needed.”

Being part of a show made her feel needed, because she realized how important she was to the program.

Powell said his program is about helping students find where they are and leading them to the next step. The format he has created of pairing up students and making them responsible for each other in all aspects has strengthened both the feeling of accountability as well as the family-like bond among his students.

“We have people that find a home with us that maybe don’t have a home anywhere else,” he said.

When: 7 p.m. Wednesday through Saturday

Back to school amid a COVID surge: schools, universities contending with new limits on mask mandates

Forbidding mask mandates in schools is particularly outrageous to medical community leaders because children younger than 12 are not yet eligible for vaccination and vaccine rates are still very low even among those age 12 and up. #oklaed

A spokeswoman for Tulsa Public Schools confirmed Wednesday that the district’s 2021-2022 bell times are set.

Fry's official last day will be Jan. 3, but she plans to expend accrued leave, making her last day in office in early September.

She was the only education board member to vote 'no' on critical race theory rules. Here's how she feels.

After a week in which Tulsan Carlisha Williams Bradley’s solo stance drew the national media spotlight and an inundation of praise from teachers and condemnation from some parents across the state, the Tulsa World asked for her reflections. #oklaed

Thoreau Demonstration Academy will start and end its instructional day earlier in 2021-2022. TPS confirmed Tuesday that the south Tulsa magnet middle school will start classes at 7:30 a.m. with students on campus as early as 7 a.m. three days per week for optional programs.

$10,000 in textbook vouchers to be provided for first students in TCC, OSU-Tulsa joint venture

Sunday, July 18, is the deadline for applicants to College Park to receive full consideration. Applications submitted after Sunday still have a chance, and will be placed on a waiting list should space become available, officials said.

Tulsa Public Schools says it will make no changes to its lessons in response to HB 1775 or the newly adopted emergency rules for public schools across the state. #oklaed

Students including Scotty Jirik (center), as Uncle Fester perform during a dress rehearsal for The Addams Family at Union High School in Tulsa, Okla., on January 28, 2015. JAMES GIBBARD/Tulsa World

Students Ruby Shadley as Wednesday Addams, and Tyler McCoy as Gomez perform during a dress rehearsal for The Addams Family at Union High School in Tulsa, Okla., on January 28, 2015. JAMES GIBBARD/Tulsa World