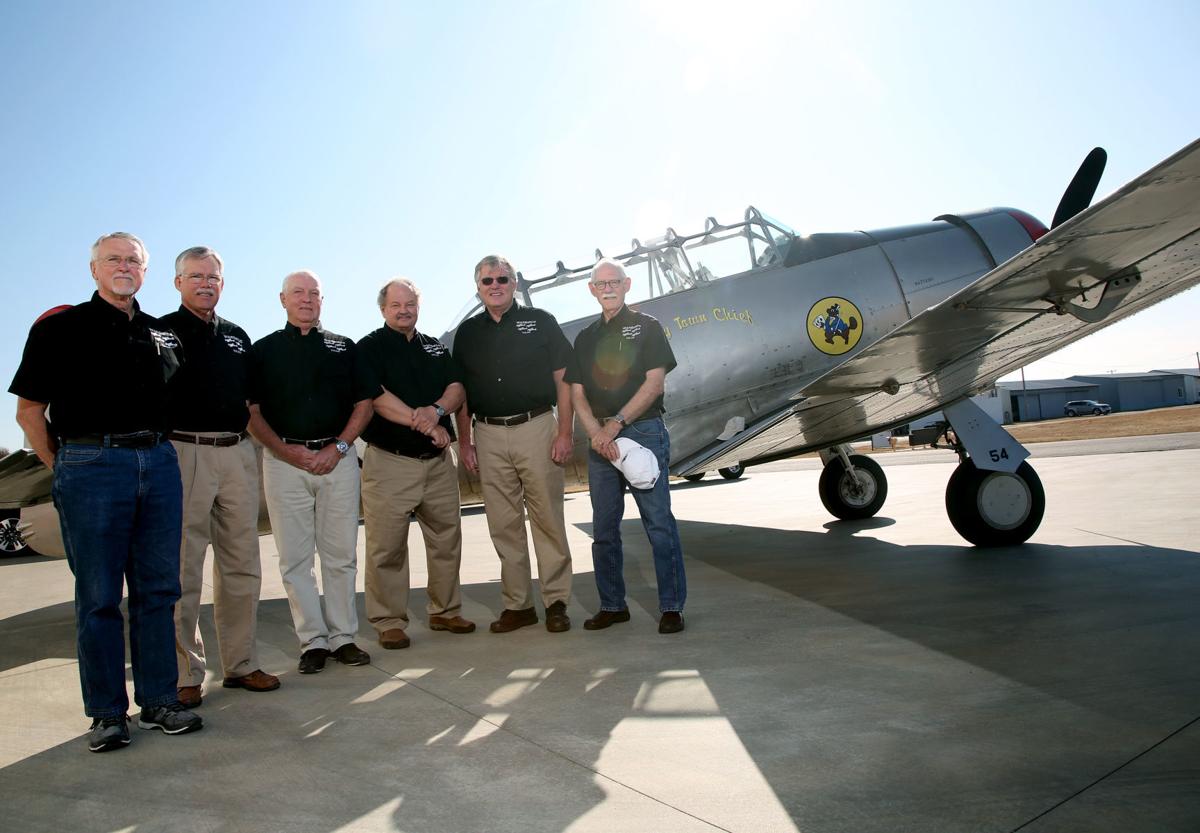 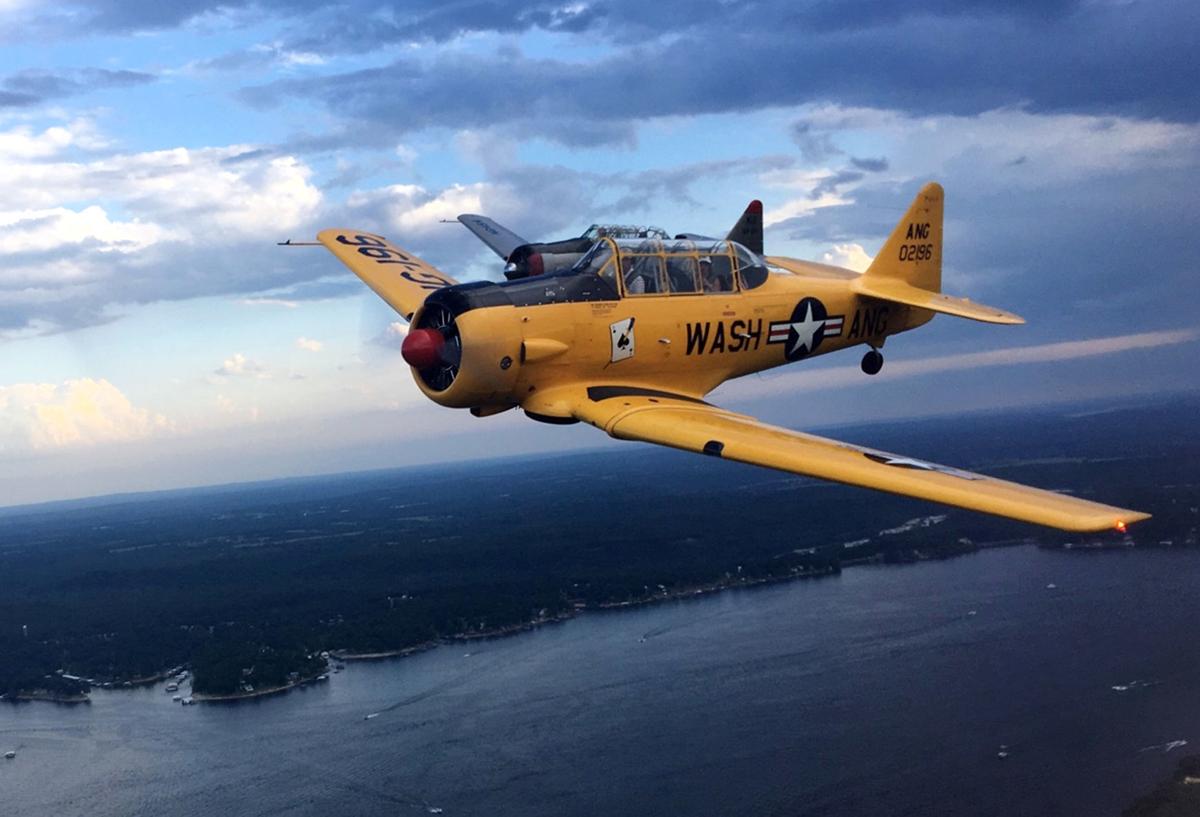 Two of the Tulsa Warbirds' World War II-era T-6 aircraft are shown during a flyover. The Warbirds are a group of volunteer pilots who perform flyovers at football games, veteran funerals and other events. Courtesy 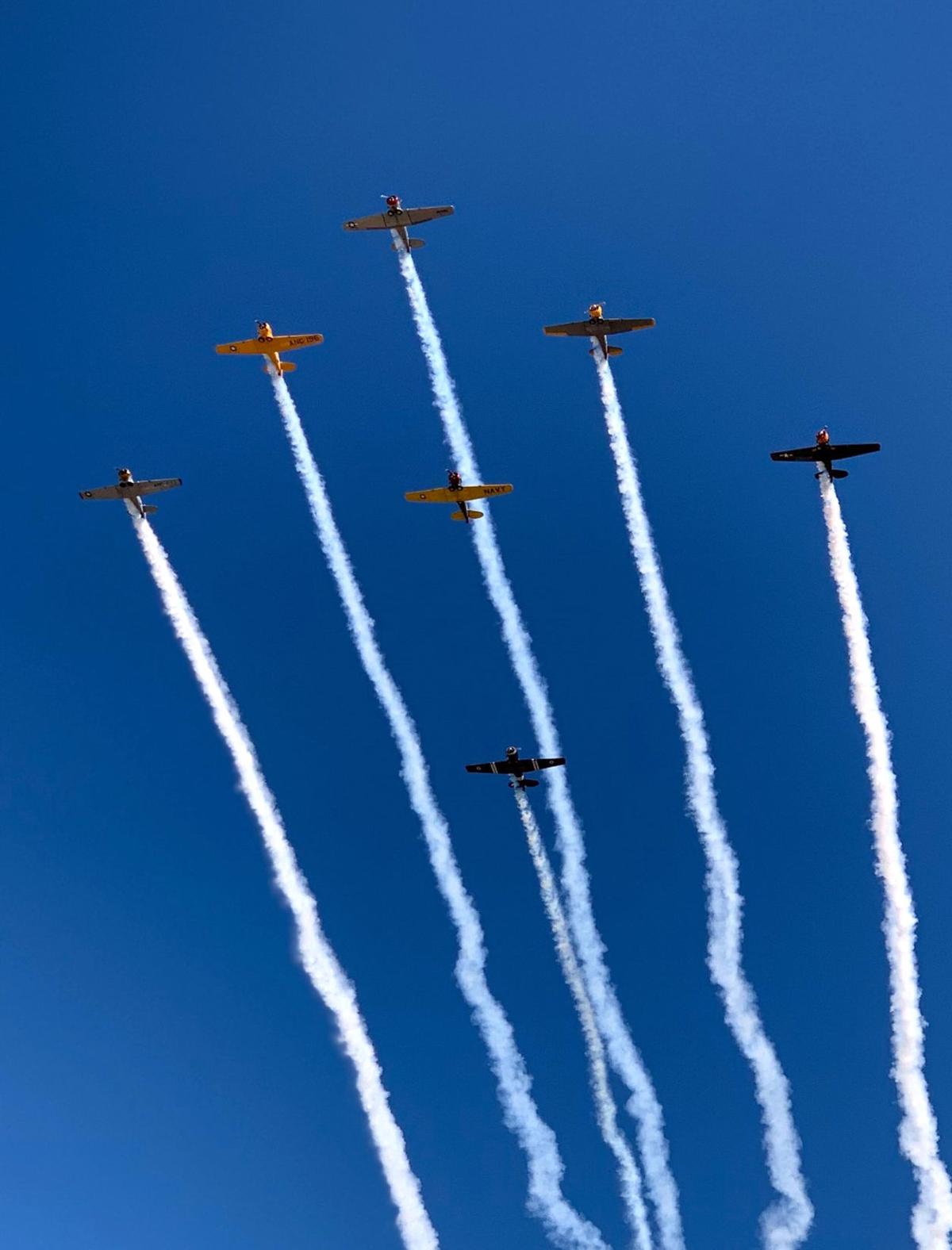 The Tulsa Warbirds, who fly World War II-era T-6 aircraft, are shown in formation during a flyover. The volunteer pilots have appeared at football games, veteran funerals and other events. Courtesy 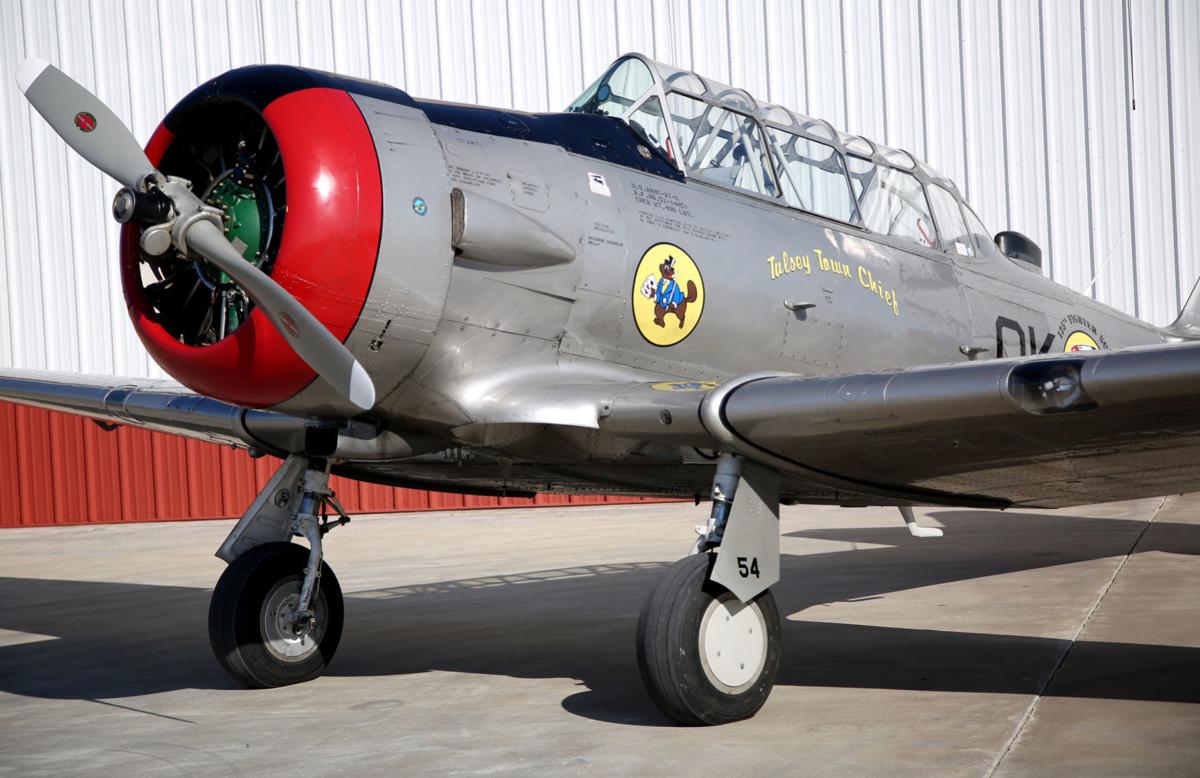 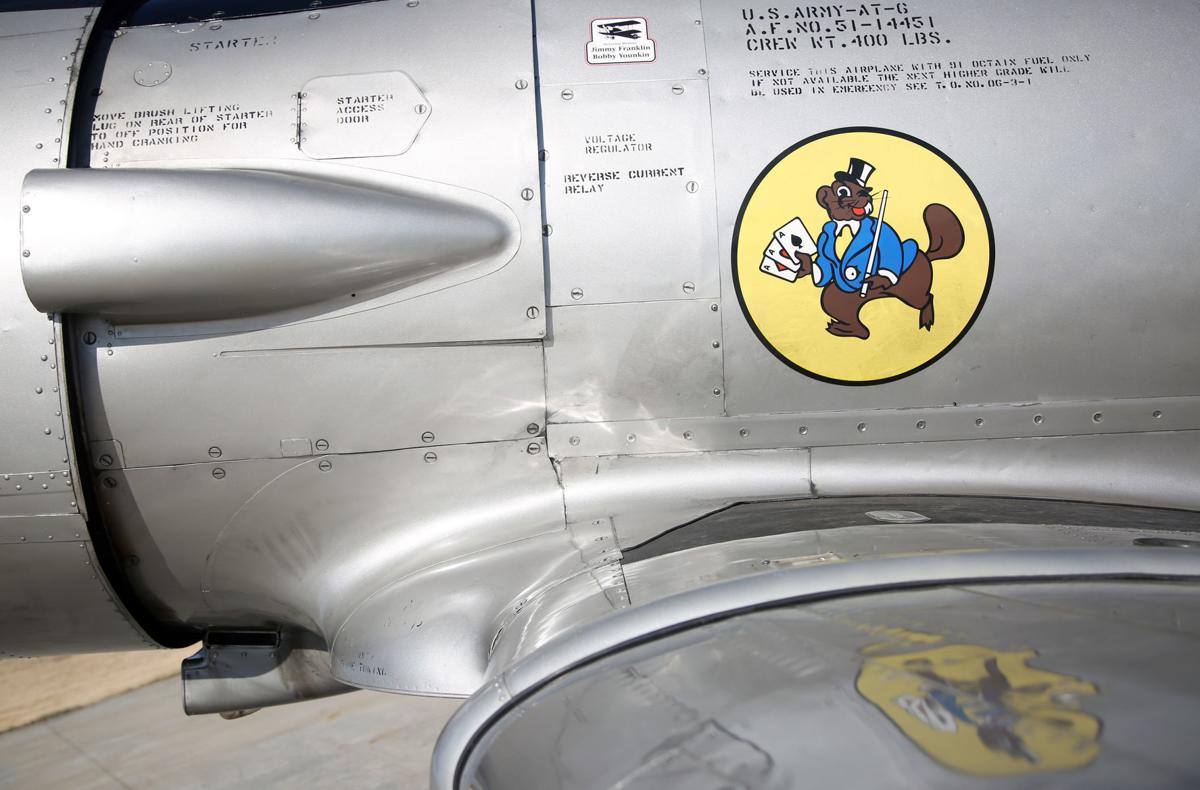 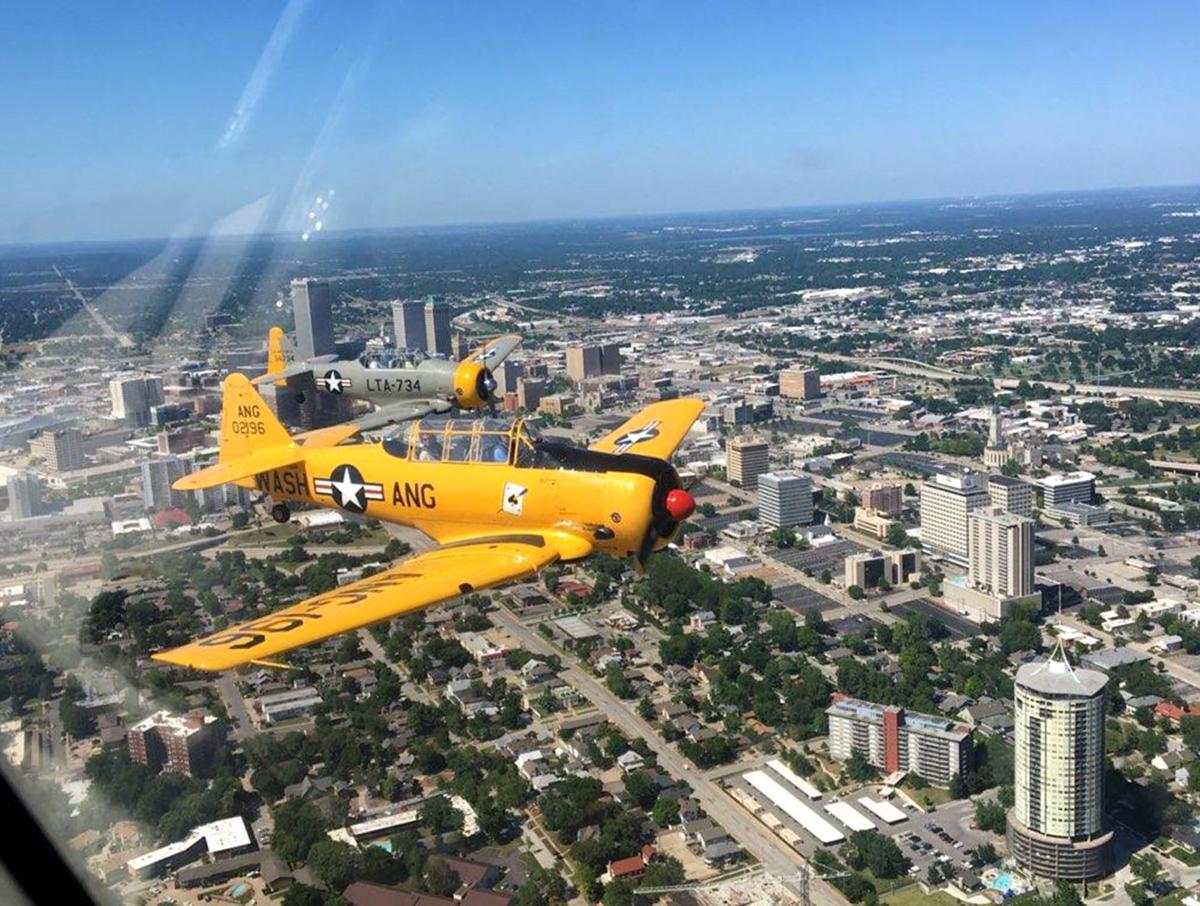 Two of the Tulsa Warbirds participate in a flyover over downtown Tulsa. Courtesy 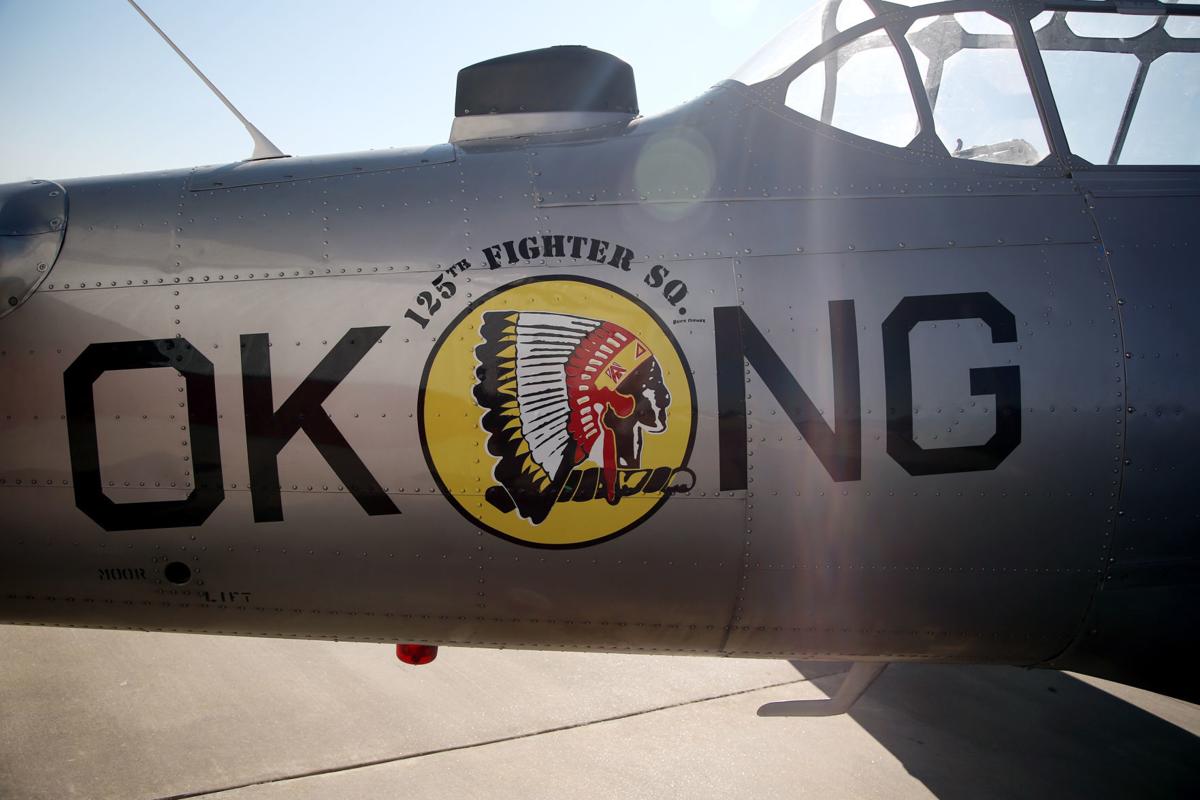 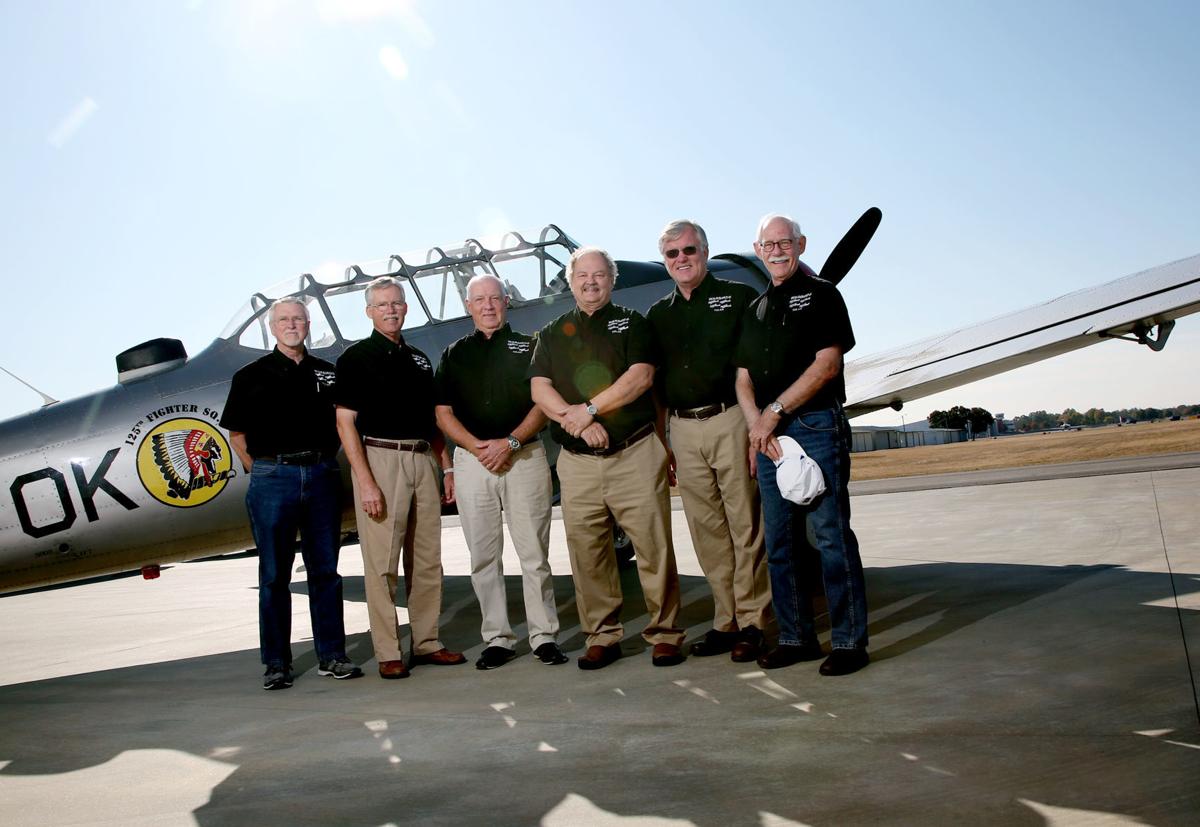 Two of the Tulsa Warbirds' World War II-era T-6 aircraft are shown during a flyover. The Warbirds are a group of volunteer pilots who perform flyovers at football games, veteran funerals and other events. Courtesy

The Tulsa Warbirds, who fly World War II-era T-6 aircraft, are shown in formation during a flyover. The volunteer pilots have appeared at football games, veteran funerals and other events. Courtesy

Two of the Tulsa Warbirds participate in a flyover over downtown Tulsa. Courtesy

Like his fellow Tulsa Warbirds members, pilot Greg Vogt knows something about the history behind his plane.

But for him, it’s also personal.

“Every time I sit in it I think about the uncle I never knew,” said Vogt, who along with the other Warbirds performs flyovers at events.

Vogt’s uncle was killed in a training crash during World War II, he said, while serving with the Royal Canadian Air Force.

The aircraft Vogt flies now was one of those assigned to his uncle’s location.

“When I bought the plane I didn’t know the history of it,” he said. “But there’s a high probability that my uncle flew it.”

Whether or not they know specifics about the men who once flew their WWII-era aircraft, all of the Warbirds share the same desire to honor their memories.

And as they continue to fly for more and more audiences, they want to keep that message front and center.

The all-volunteer Warbirds, who have become regulars at University of Oklahoma home football games, are wrapping up a busy year of flyovers that has seen their schedule keep growing, as they’ve added more football, along with parades and veteran funerals.

Including a recent veterans parade in Ponca City, the Warbirds have done more than 30 events in 2019, the most they’ve done in one year.

The group’s founder and lead pilot, Paul Mackey, said the activity has really picked up this year as word has spread.

“It’s taken on a life of its own,” said Mackey, a retired Oklahoma Air National Guard colonel and fighter pilot.

To aid in the mission, Mackey, now a commercial pilot with American Airlines, recently formed the Tulsa Warbird Foundation.

So many people had expressed an interest in supporting the group, he said, it seemed like a good next step.

The Warbirds, based at Jones Riverside Airport, currently consist of 10 pilots.

‘Caretaker of a piece of history’

The Warbirds’ planes, all around 80 years old, are T-6 Texan training aircraft.

The planes that all Allied fighter pilots learned on during WWII, they are similar to fighter aircraft, and were often called “pilot makers.”

Many young airmen also died in the T-6. Training could be more dangerous than combat, and accidents were common.

The Warbirds, who each own their own T-6, take all of that history seriously.

Fostering a greater appreciation for the aircraft of the WWII-era and those who flew them is a “high objective” for the Warbirds, Mackey said.

“We are living history,” Mackey added. “Museums with aircraft are great, but they don’t put them in the air.”

Dale Cuckler, a retired commercial airline pilot and the most recent addition to the group, is one of the Warbirds, along with Vogt, who’s not a veteran.

But his dad was a Navy aviator and his interest in WWII aircraft dates back to his boyhood.

Cuckler doesn’t think of himself so much as his plane’s owner, “as a caretaker of a piece of history,” he said.

“And when we’re done somebody else will take over and take care of it.”

While preserving history, the Warbirds hope, too, to stir up a little patriotic spirit.

“I want them to feel pride in America and what I call the great American experiment,” he said.

‘Home of the brave’

Football games continue to be the group’s most frequent venue.

The Warbirds have a strong relationship with OU, and have been doing flyovers at two OU home games annually as part of pregame national anthem ceremonies for several years.

This year the Warbirds also participated in OSU’s homecoming game, their first time to fly at OSU. They were so well received they’ve already been invited back next year for the grand opening of OSU’s new baseball stadium, Mackey said.

The group has also flown for high school football, including the Broken Arrow-Owasso game earlier this season.

Mackey, who first performed flyovers when he was still active duty, said the Warbirds are FAA-approved to fly in formation.

At bigger events, like the football games, all 10 may participate. At smaller ones, maybe just three or four.

At the games, the appearances are coordinated to help conclude the national anthem.

The timing is tricky, Mackey said, but “we want to be directly over the 50 yard line when the singer is at ‘home of the brave’”

“We’ve missed it a little bit here and there,” he said. “But not by much.”

“There are a lot of moving parts,” Mackey said, adding that the timing depends on helpers on the ground.

The pilots must wait until afterward to see the response from onlookers. But it’s worth it, Mackey said.

Reactions like that of one area superintendent, who told them she was brought to tears, are common.

“And we get the same reaction no matter the venue,” Mackey said, “whether it’s a seventh-grade game like one we did this year, or NCAA Division I.”

When they’re not in the air, the Warbirds serve as mentors to younger pilots, including with the Oklahoma Air National Guard.

“That’s a big part of who we are,” Mackey said.

Vogt, having not served in the military, said he feels both “an obligation and a respect” toward veterans.

When he flies, he said, “it’s my way of paying tribute to all those pilots, including those who paid the ultimate sacrifice.”

Vogt said it was right after he’d acquired his T-6 five years ago that he discovered its probable connection to his late uncle.

“I saw the serial number and I googled it. The rest is history,” he said.

Like many other young Americans immediately following the U.S. entry into the war, Richard Vogt volunteered for Canada’s Air Force because it didn’t require two years of college to become a pilot.

“He was 19 and he wanted to fly in the war,” Greg Vogt said, adding that his uncle was participating in advanced training when he was killed.

“She said it was my destiny to own this plane.”

For more information on the group, including how to schedule a flyover, call Paul Mackey at 918-408-7278.

Stanley is a general assignment reporter and the writer behind the award-winning "World War II Veterans Remember" series & book. 918-581-8385