Still standing at 70: Here's the story behind Tulsa's Statue of Liberty
Share this
{{featured_button_text}}
1 of 4 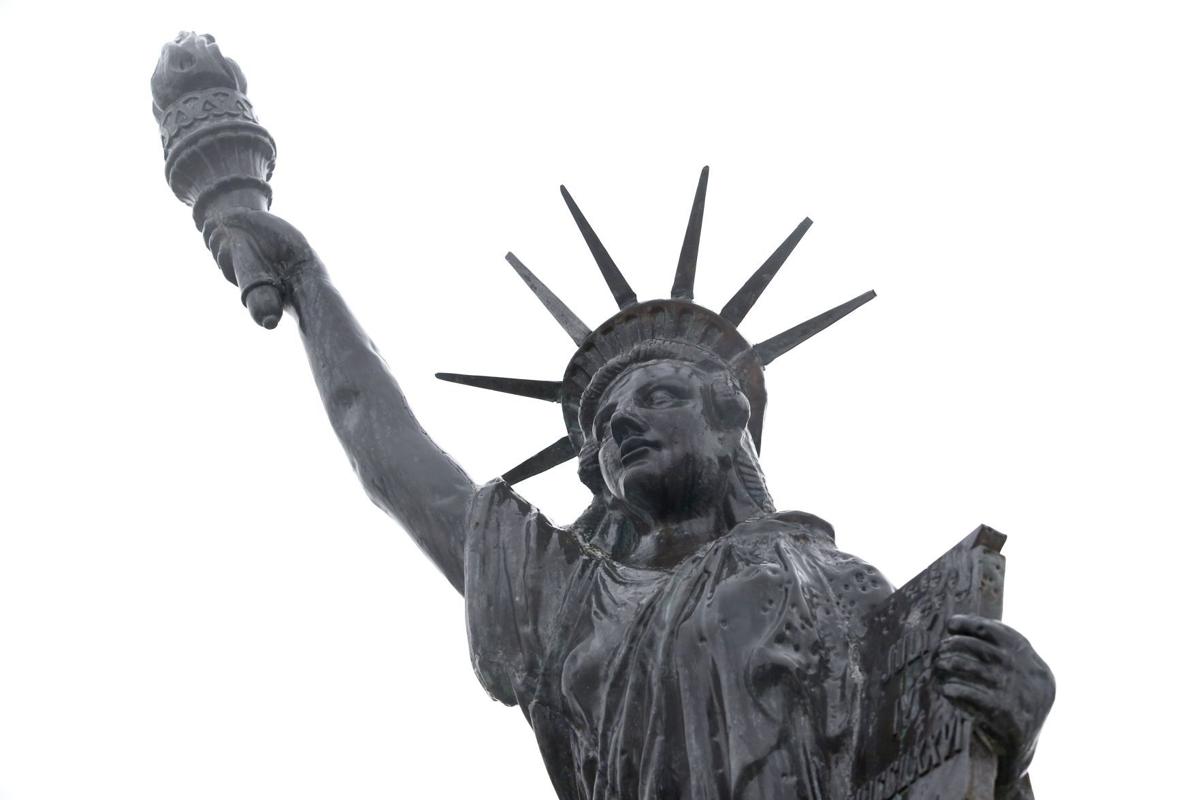 A replica of the Statue of Liberty was unveiled 70 years ago this month at Lanier Elementary School. MATT BARNARD/Tulsa World 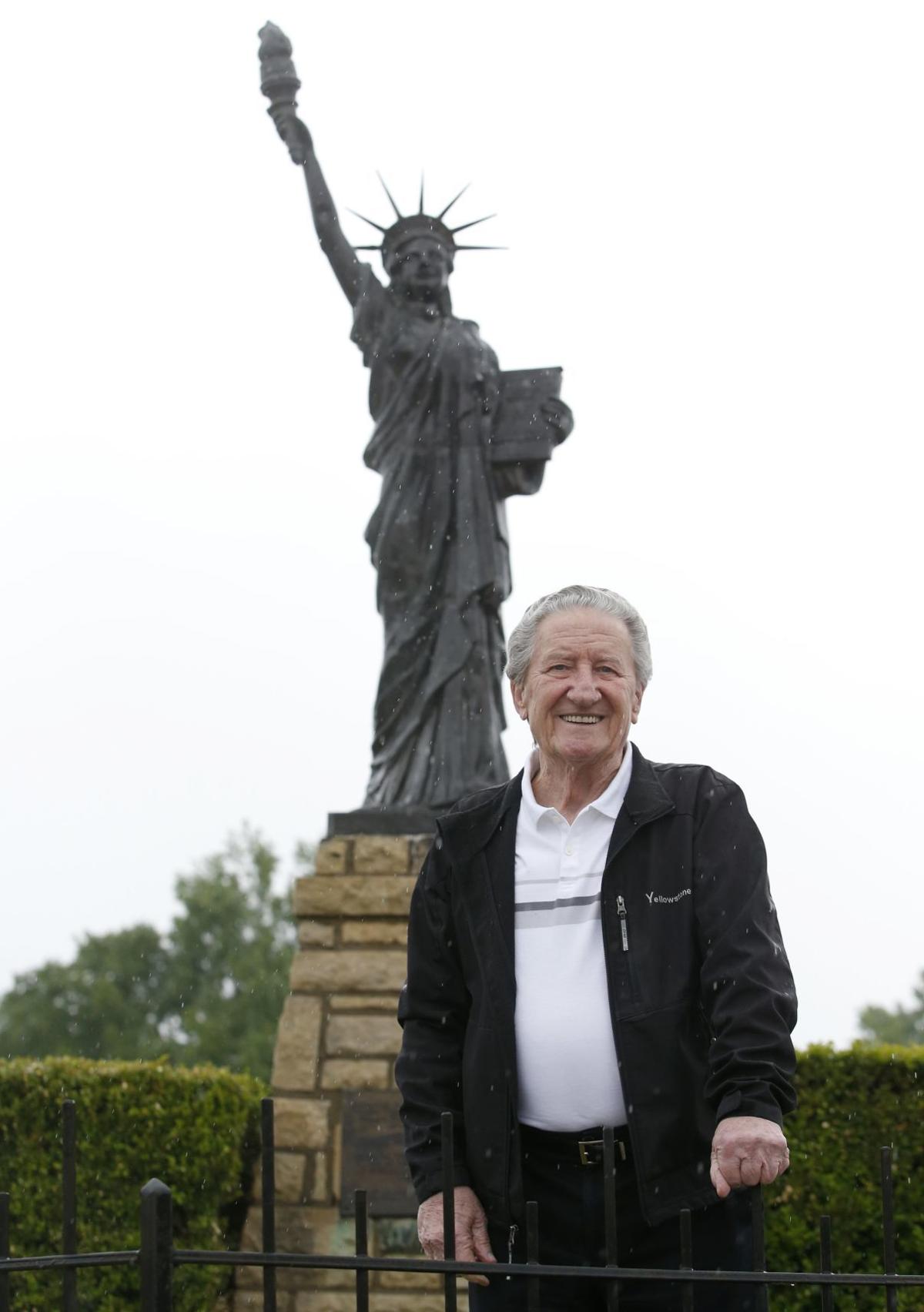 Jerry Kirkpatrick stands near a replica of the Statue of Liberty installed 70 years ago this month at Lanier Elementary School. Kirkpatrick was a Cub Scout and attended the school when the statue was dedicated. MATT BARNARD/Tulsa World 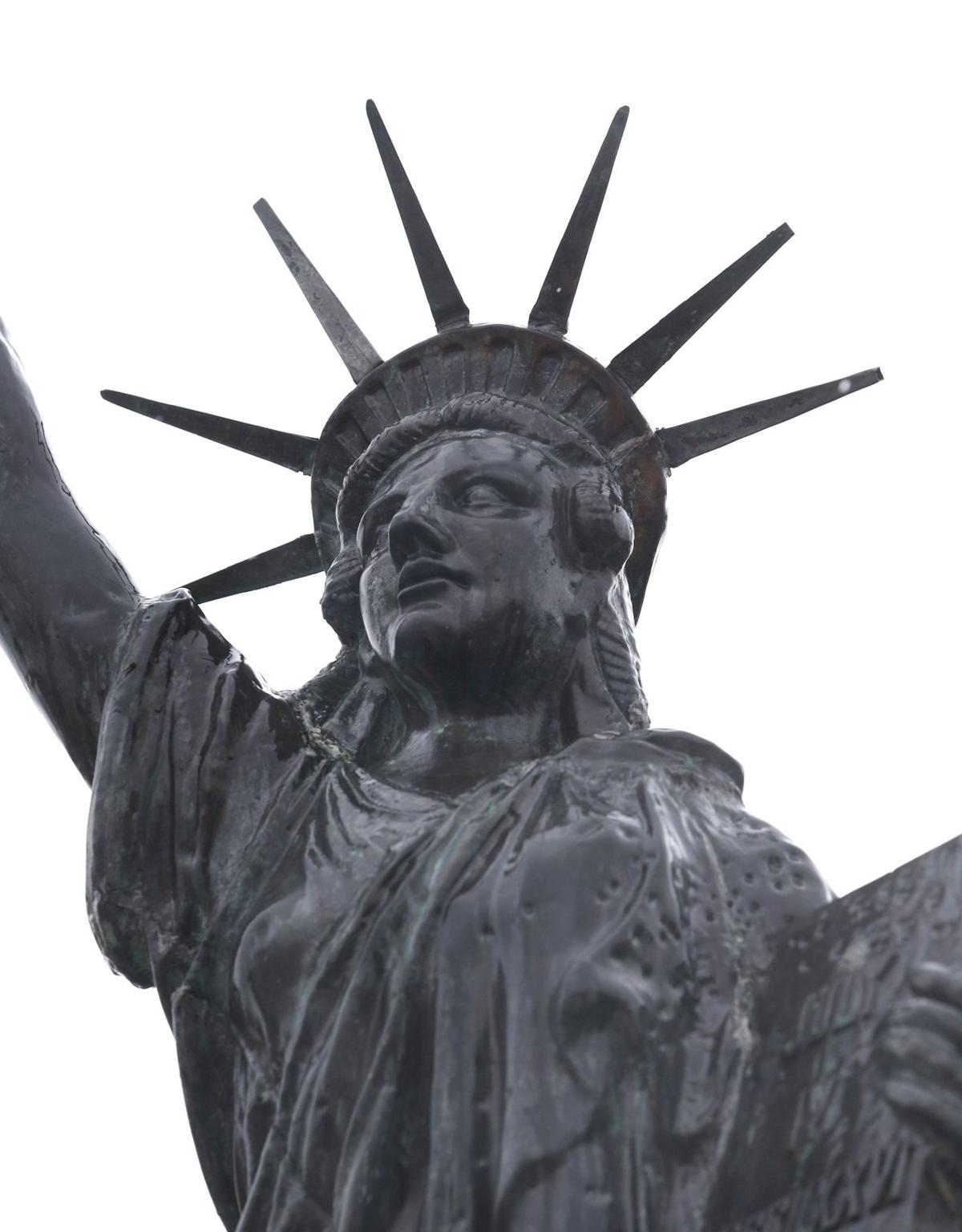 Replicas of the Statue of Liberty sprang up all across the country during a Boy Scouts of America campaign. Tulsa’s statue is still standing 70 years later at Lanier Elementary School. MATT BARNARD/Tulsa World 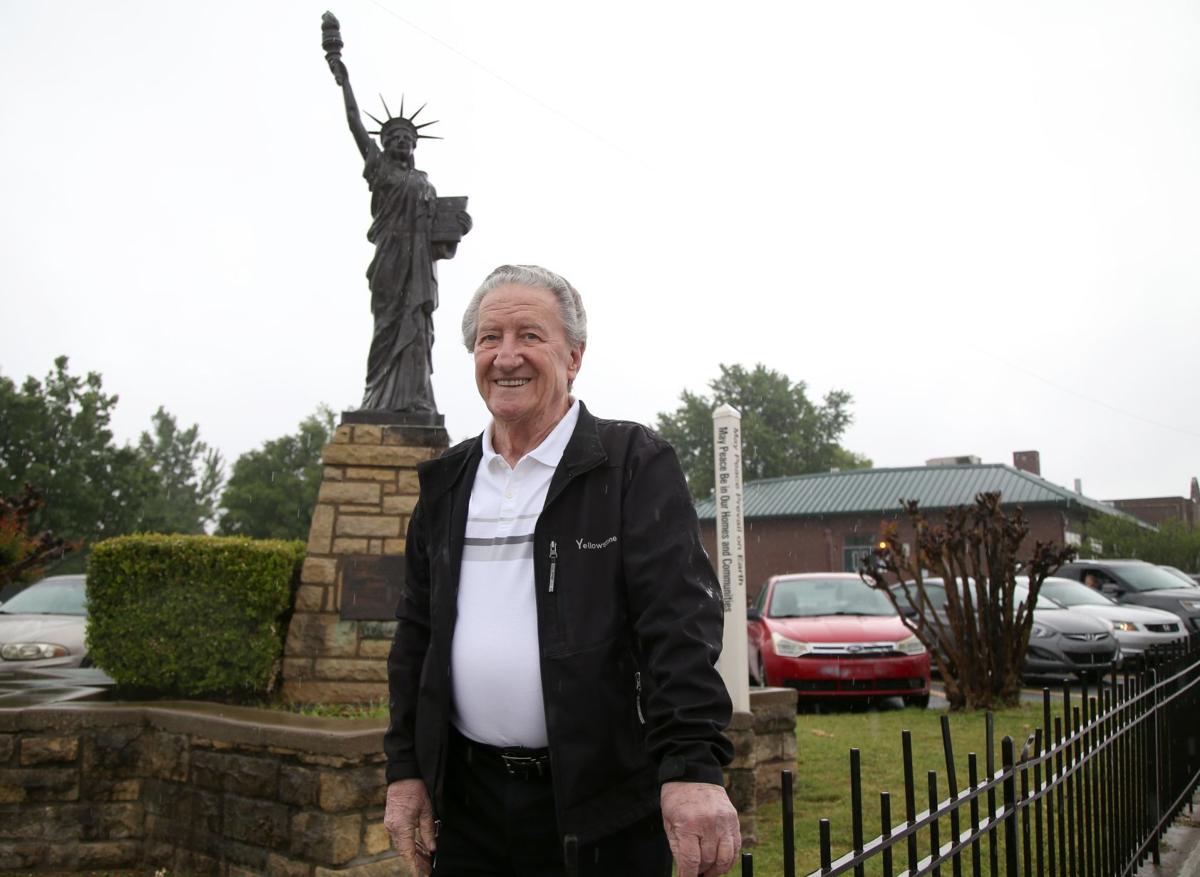 Jerry Kirkpatrick stands near a replica of the Statue of Liberty that was installed 70 years ago at Lanier Elementary School.

A symbolic figure stands above the landscape near the fairgrounds.

Sure. But he’s got company that’s quite a bit shorter and no less proud.

Less than a mile away, at Lanier Elementary School, stands a replica of the Statue of Liberty.

“I think it really is sort of a hidden gem,” Jerry Kirkpatrick said. “I don’t think very many people even know about it. Nearly everybody has gone past 17th and Harvard if they have lived here very long, either going to the fair or something. But there are not a lot of them that notice that Statue of Liberty.”

Maybe it’s time to stop for a photo op because the statue is celebrating a milestone.

The replica was unveiled in May 1950, which means Tulsa’s Lady Liberty is 70.

Kirkpatrick knows of eight or nine guys who are still around from the group effort that led to a replica statue springing up at the school. “It’s just kind of fun to give them a call and say, ‘Guess what we did 70 years ago?’ and remind them of that,” he said.

Kirkpatrick isn’t seeking attention for himself or those responsible. He just wants to raise awareness about, as he said before, one of Tulsa’s hidden gems. Maybe if more people knew about the statue’s existence, Route 66 travelers might be tempted to travel a flew blocks from the Mother Road and pay the statue and the Golden Driller a visit.

And if they wanted to see every one of Lady Liberty’s “twin sister” statues around the country, that would be an ambitious connect-the-dots mission. There are about a hundred dots.

A landing place for Lady Liberty

You can thank the Boy Scouts for Tulsa’s Statue of Liberty replica.

In 1950, the Boy Scouts of America launched a “Strengthen the Arm of Liberty” campaign in conjunction with the organization’s 40th anniversary. The campaign began with a torch-lighting ceremony beneath the Statue of Liberty, and it included the placing of 200 small-scale replica statues in towns all across the country and in U.S. territories.

The period was post-World War II America, early in the Cold War.

“Whether the future is to be one of freedom or despotism depends chiefly on how our young people develop,” Boy Scouts of America President Amory Houghton said in Scouting magazine when the “Strengthen the Arm of Liberty” program was announced.

The Boy Scouts forged ahead with program initiatives and local Cub Scout and Boy Scout troops raised funds to ensure that Tulsa would be a landing place for one of the replica statues. Kirkpatrick was a Cub Scout at the time. According to a 2001 Tulsa World story, scouts raised money by doing odd jobs or scouting projects. Lanier students, the school’s PTA and other community organizations chipped in to collect $300 for the statue, which stands 8½ feet tall and weighs 290 pounds. A stone base was added for a total cost of $612.

“It was an excitement you couldn’t bottle up,” Bill Harris recalled in a 2001 Tulsa World interview.

A Boy Scout who helped with fundraising, Harris was 13 when the replica made its debut. He wore his Scout uniform for the unveiling, and he told the Tulsa World the event changed his life. When he entered the armed forces, he did so with memories of that day in mind.

“Whenever I drive by, I still get that warm, patriotic feeling,” he said in 2001.

A source of pride

Marti Attoun wrote in Scouting magazine that weather and vandalism exacted a toll. Some cities restored their statues and others junked them. In 1998, a troop in Cheyenne, Wyoming, embarked on a project to locate remaining statues and asked people to send photos and information about statues they found.

You might be hard-pressed to find a statue (manicured hedges are on both sides of the base) as well-kept as Tulsa’s. The city’s Lady Liberty got a facelift in 1995, when Bama Pie Ltd., an Adopt-a-School partner of Lanier Elementary, backed a $5,000 refurbishment — a hefty price tag even though architect Bill Knowles donated labor.

Pre-makeover, the statue showed visible signs of deterioration. The shine was gone. Spikes from the crown were missing, an arm was close to breaking and copper seams were splitting.

After the repairs? “She is beautiful,” Estalene Spears of Bama Pie said in 1995. “She looks really nice again.”

Then-principal Sharlene Johnson told the Tulsa World the statue was a source of pride for the school.

It’s still a source of pride for Kirkpatrick, who was born a block from Cain’s Ballroom (“There’s a chance Bob Wills was probably hammering over there a block away”) and has spent virtually all his life in Tulsa.

Kirkpatrick, who lived in housing on the fairgrounds as a kid, now resides a few miles away in south Tulsa. He goes by to see the statue from time to time.

“I think it is impressive,” he said. “I try to curtail my thoughts as much as I can because I am prejudiced.”

Kirkpatrick said he is proud “for Tulsa.”

Jake Henry Jr., president and CEO of Saint Francis, said he doesn't think the trend is sustainable for Saint Francis — the largest health care system in Oklahoma — and that it has hired 18 contract registered nurses as the influx rises.

Coca-Cola is saying goodbye to 200 brands, or half of its portfolio.

“It just took everybody by surprise. Now we are having to deal with the grief that so many other families are dealing with right now,” said Tony Horse, Dean Cooper’s son-in-law who now runs Dean's Grinding Service, 9201 E. Admiral Court.

Michael Overall: Could Tulsa ruin its downtown landmark by changing Center of the Universe?

Tulsa officials have presented a preliminary plan for $2.35 million in improvements to the iconic pedestrian bridge.

'Vast majority' of Tulsa's record COVID-19 hospitalizations are from outside city, officials say

A replica of the Statue of Liberty was unveiled 70 years ago this month at Lanier Elementary School. MATT BARNARD/Tulsa World

Jerry Kirkpatrick stands near a replica of the Statue of Liberty installed 70 years ago this month at Lanier Elementary School. Kirkpatrick was a Cub Scout and attended the school when the statue was dedicated. MATT BARNARD/Tulsa World

Replicas of the Statue of Liberty sprang up all across the country during a Boy Scouts of America campaign. Tulsa’s statue is still standing 70 years later at Lanier Elementary School. MATT BARNARD/Tulsa World

Jerry Kirkpatrick stands near a replica of the Statue of Liberty that was installed 70 years ago at Lanier Elementary School.