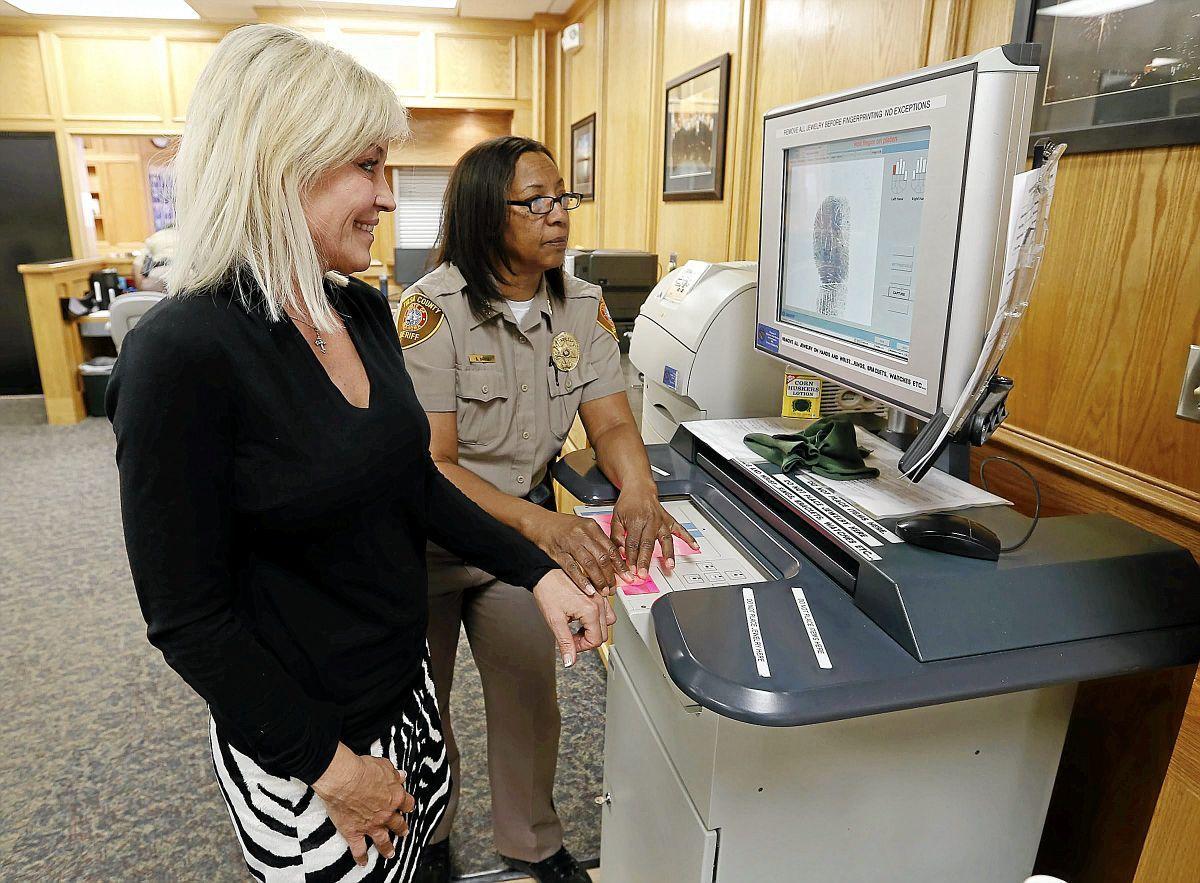 April Smith is fingerprinted by Tulsa County Sheriff's Deputy Bobbie Harris on Wednesday as part of the process of applying for an Oklahoma Self-Defense Act license. STEPHEN PINGRY/Tulsa World 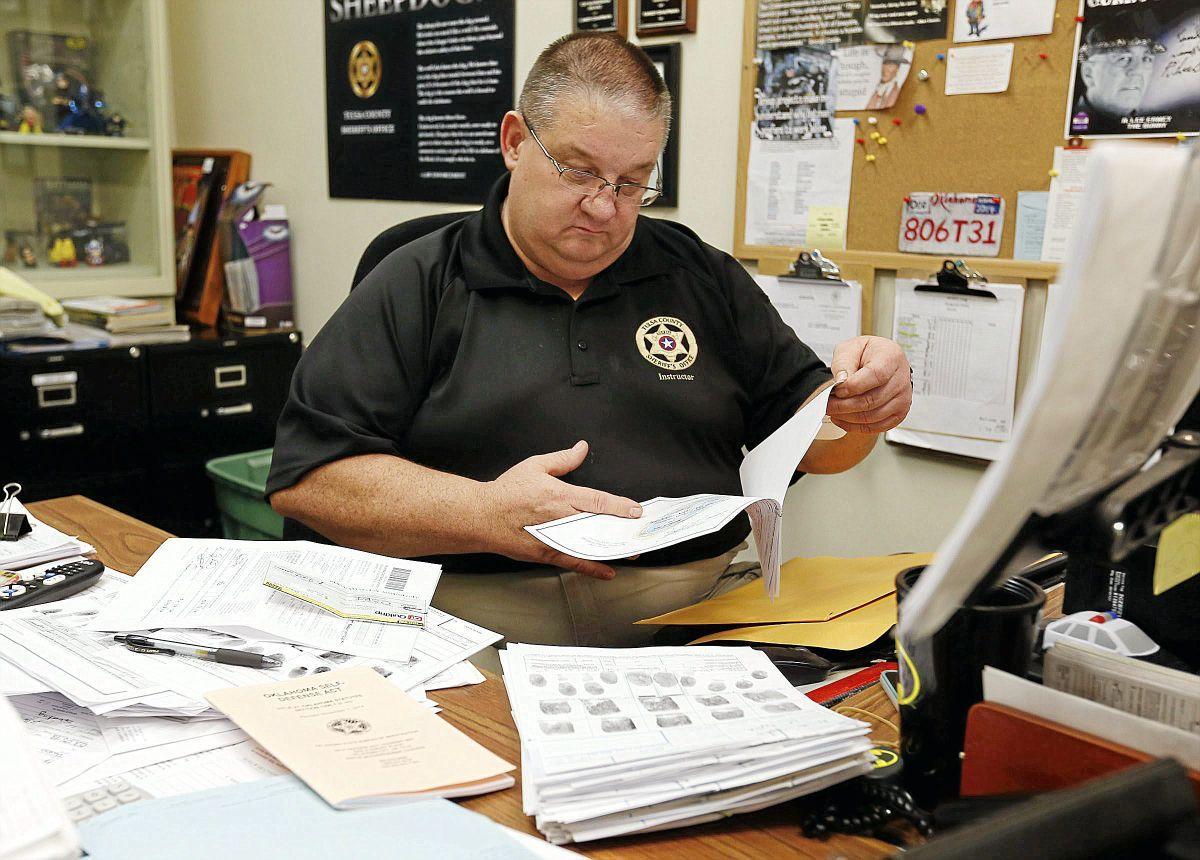 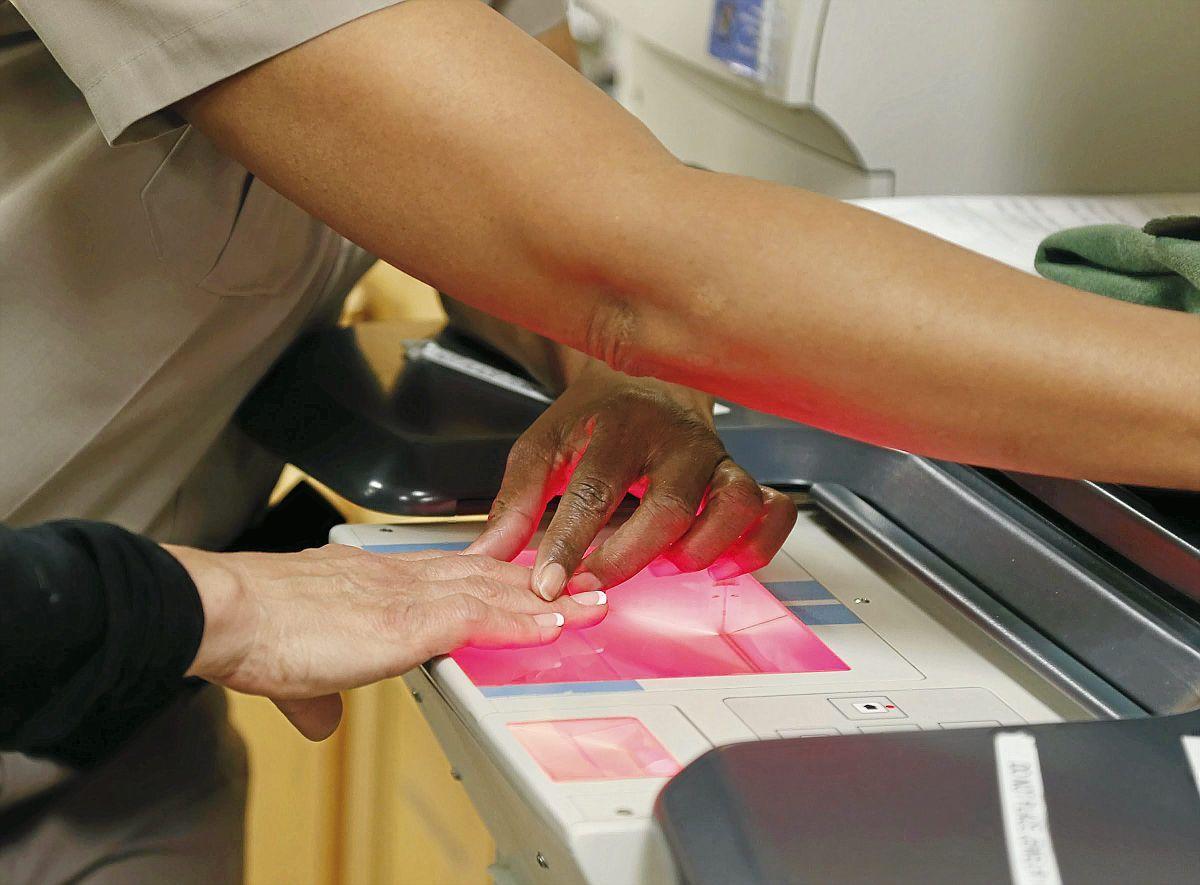 Fingerprinting is part of the process of applying for a gun-carry license. STEPHEN PINGRY/Tulsa World 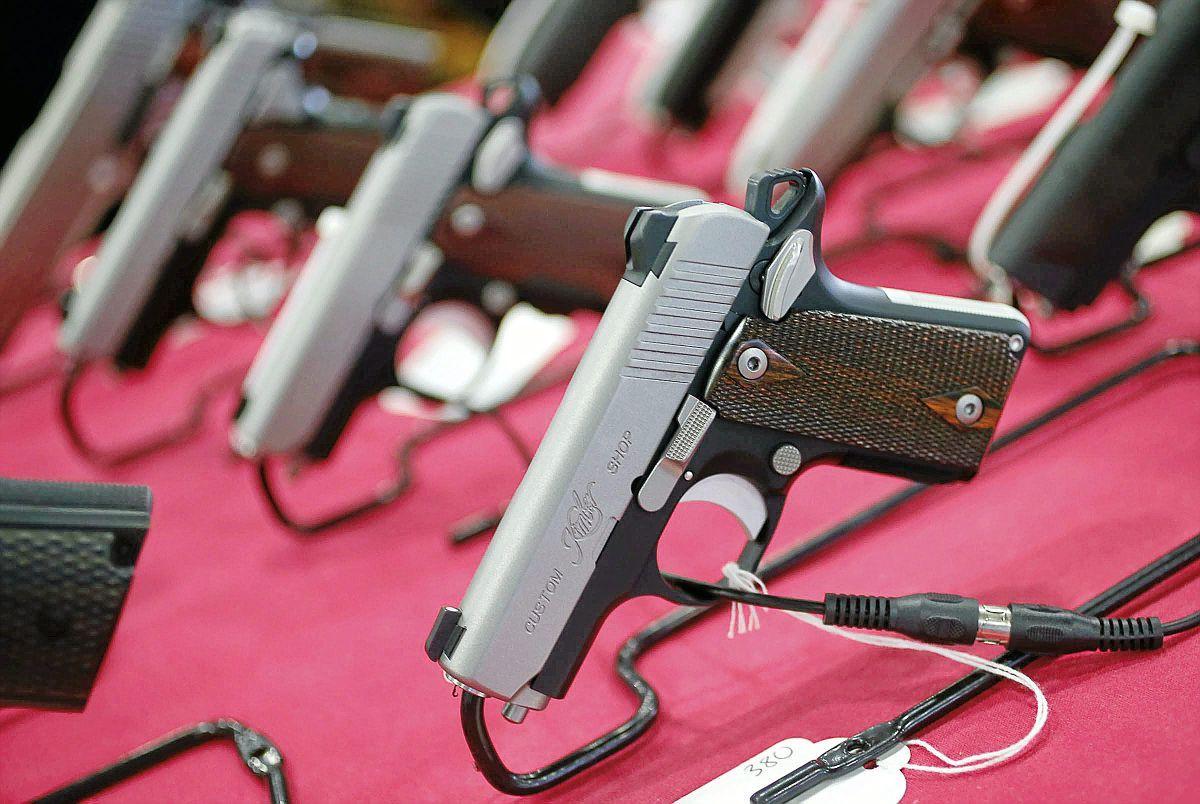 Handguns are on display during the Wanenmacher's Tulsa Arms Show at the River Spirit Expo Center in Tulsa. MATT BARNARD/Tulsa World File

Although the correlation between licensed gun owners per capita and gun deaths in a state remains debatable, one thing is clear: When guns are in the news, firearms purchases and applications for permits to carry them go up.

On Wednesday, the Oklahoma State Bureau of Investigation released data showing a large increase in the number of gun-carry license applications from November to February.

The number of applications received on a weekly basis has nearly tripled in that time frame. One of the most notable jumps was between the last week of December and the first week of January.

During the week of Dec. 28, the OSBI received 744 applications under the Oklahoma Self-Defense Act, which enables open carry or concealed carry. The week of Jan. 4, the number received rose to 1,178.

Additional funding for mental health care and advances in technology for gun safety also were among the president’s provisions.

Forcing all gun dealers to conduct background checks particularly drew the ire of gun supporters, because accessing the system requires a federal license — a process that can take some time, said Joe Wanenmacher, who owns and operates Wanenmacher’s Tulsa Arms Show.

“It’s unfair to the small person that wants to sell a few guns a year or just wants to trade up,” he said.

Aside from Obama’s announcement, the race for the next president may also play a factor in people’s desire to load up.

Specifically, the uncertainty for the Republican nomination has left voters from that party with the thought that the next president could be a Democrat — which likely will mean more gun regulation, Wanenmacher said.

Aside from political motivation, fear of violence, either in the form of a home invasion or out in public, remains a persistent threat looming over Oklahomans, Wanenmacher said.

Chapman has seen spikes over the years. Anytime a shooting gains nationwide media attention, his office is flooded with applications, he said.

The same was true after the president’s speech in January.

“It has definitely increased over the last few months,” Chapman said.

According to a July report from the Crime Prevention Research Center, Oklahoma ranks 17th in gun permits per capita. It should be noted, however, that some states don’t require a permit in order to carry a gun.

The Centers for Disease Control and Prevention ranked Oklahoma ninth in gun-related deaths in 2014. The figures don’t specify the nature of the deaths.

A number of conflicting studies show the causality, or lack thereof, among gun ownership, those who are licensed to carry and gun deaths.

The downward trend might reverse in 2016. The state has already seen more than 6,600 applications submitted in the first five weeks of the year. In the weeks before Nov. 30, the numbers ranged from 551 to 764 applications per week, according to the OSBI.

Last week’s number has not been tabulated, but the agency projects that it will be somewhere around 1,500.

On Jan. 12, Creek County Sheriff John Davis posted a letter to his office’s Facebook page encouraging residents to use their Second Amendment rights.

Davis reduced the regular $25 fee for processing fingerprints to $10 and expanded business hours to include one Saturday per month to accommodate people who can’t make it to the Sheriff’s Office during the week.

The OSBI said several sheriffs across the state have waived their $25 fingerprinting fee and encouraged residents to apply for a license as a means of personal protection.

When people come in to apply for a gun-carry permit, they don’t always explain why, Chapman said. But he hears a lot of the same sentiment.

“The world’s getting meaner all the time,” he said. “I’m sure people are trying to do whatever they can to protect themselves and their family.”

The death toll in the state has risen to 905 with 69,354 cases confirmed since March.

Friday's reporting is the second-highest daily increase in new cases since the pandemic began; 516 patients are currently hospitalized with suspected or confirmed cases.

Rowdy Swanson of Duncan sustained fatal injuries while competing independently at a rodeo in north Texas.

According to a news release, they will discuss advances in hospital treatments and the drug remdesivir.

The death toll is 912 with 71,314 cases confirmed. Three of the fatal cases reported Tuesday were patients from Tulsa County.

April Smith is fingerprinted by Tulsa County Sheriff's Deputy Bobbie Harris on Wednesday as part of the process of applying for an Oklahoma Self-Defense Act license. STEPHEN PINGRY/Tulsa World

Fingerprinting is part of the process of applying for a gun-carry license. STEPHEN PINGRY/Tulsa World

Handguns are on display during the Wanenmacher's Tulsa Arms Show at the River Spirit Expo Center in Tulsa. MATT BARNARD/Tulsa World File