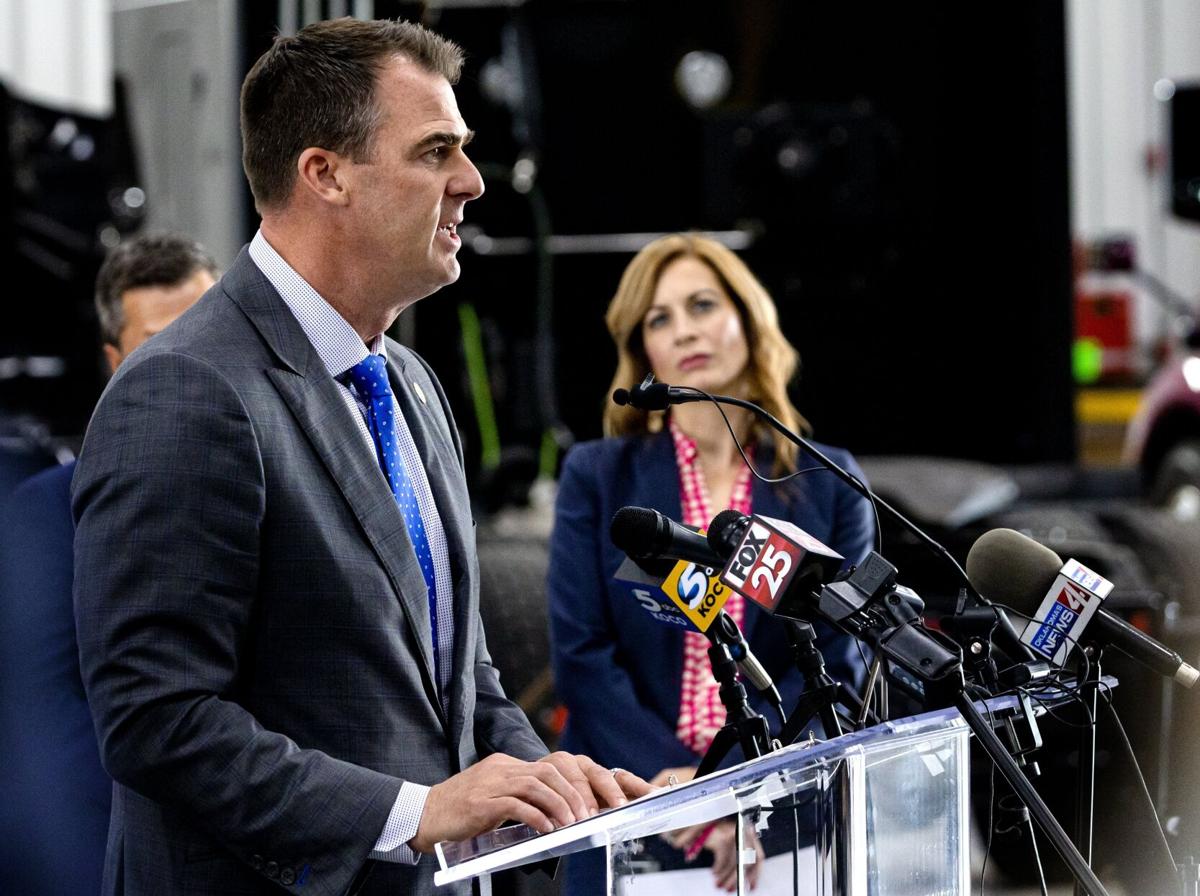 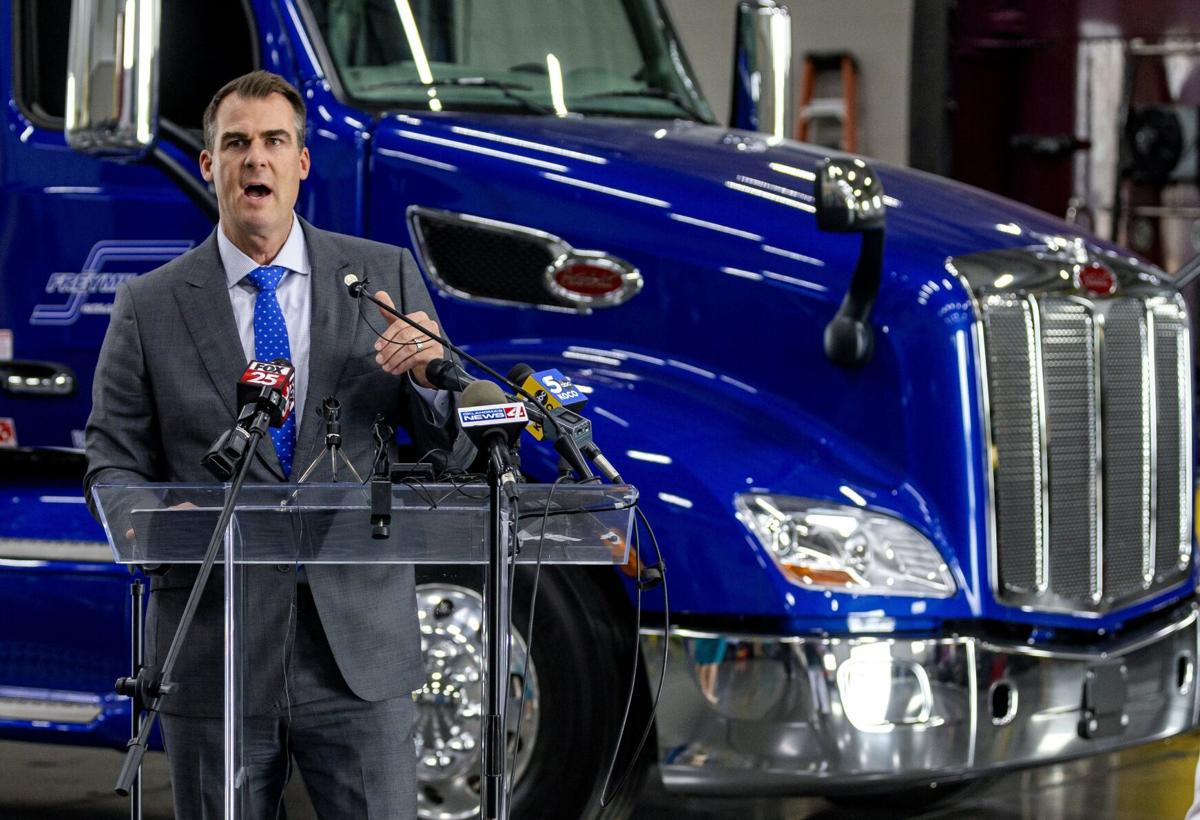 Gov. Kevin Stitt announces a $1,200 return-to-work incentive in a press conference at Freymiller Trucking in Oklahoma City on Monday.

OKLAHOMA CITY — State officials on Monday announced an end to the $300 additional federal aid in unemployment and a $1,200 incentive for certain individuals who get off unemployment and go back to work.

“That gives people six weeks to get off the sidelines and get back into the game,” Stitt said.

Stitt said the additional $300 in federal unemployment aid has acted as a disincentive for the unemployed to find a job.

The money to pay for the $1,200 incentive is coming from the federal American Rescue Plan, Stitt said.

They will not receive the additional $300 weekly benefit, Zumwalt said.

The timeframe for eligibility started Monday and will be ongoing through Sept. 4, she said.

Payments will begin to go out in mid-July, Zumwalt said.

“The incentive is limited to the first 20,000 approved applicants,” Zumwalt said.

Since last March, more than 1 million unemployment claims have been filed in Oklahoma, Stitt said.

The Oklahoma Employment Security Commission has paid out $5 billion in unemployment, more than what was paid out in the last 10 years combined, Stitt said.

Stitt said in some parts of the country, small businesses are still devastated by excessive lockdowns.

“Many had to shut down completely over the last year but here in Oklahoma we took the right approach,” Stitt said.

The state’s economy looks far better than other parts of the country, Stitt said.

Stitt said the challenge is not to get businesses back open, but getting employees back to work.

“Without a doubt, one of the factors causing this has been the continued extension of federal benefits,” Stitt said.

Thousands of Oklahomans are making more money in unemployment relief than they were working, he said.

“In essence, the federal government has started creating an incentive to stay at home instead of getting back into the work force,” Stitt said.

In April, there were 68,000 new job postings online, Stitt said.

“There are hundreds of good paying fulltime jobs open right now,” Stitt said. “The bottom line is COVID is no longer an emergency in the state of Oklahoma.”

Oklahoma currently has almost 200,000 people who are workforce eligible but are not working, Zumwalt said.

Chad Warmington, State Chamber president and CEO, said the extra benefits were needed when businesses were shuttered at the height of the pandemic, but that need no longer exists.

“There are jobs,” Warmington said. “Also, there are competitive wages out there.”

Competitive wages and generous benefits still haven’t moved the needle when companies are forced to compete with the federal government, Warmington said.

“I am disappointed Governor Stitt chose to deny federal money to Oklahomans still struggling to find employment because of the COVID-19 pandemic,” Floyd said in a statement.

“We are rejecting $302 million specifically allocated to Oklahoma that should be used to further stimulate our economy back to pre-pandemic levels. According to Moody’s Analytics, every dollar of unemployment benefits produces an overall return of $1.61 back into our economy.

“The governor’s new ‘back to work’ plan is proposed under the false assumption Oklahomans do not wish to return to work,” Floyd said in a statement. “Oklahoma’s current unemployment rate of 4.2% is actually lower than the average unemployment rate for the month of May from 2011-2019. The reality is that the pandemic is not yet over.”

“For Oklahomans to get back to work, they need the assurance employers will make accommodations to keep them safe at work, their children have safe and quality childcare and their families have accessible healthcare in the event they contract COVID-19. Ending Pandemic Unemployment Assistance ahead of the September expiration is shortsighted.”

Most common jobs in America

#21. Sales Representatives, Wholesale and Manufacturing, Except Technical and Scientific Products

#15. Project Management Specialists and Business Operations Specialists, All Other

#12. Secretaries and Administrative Assistants, Except Legal, Medical, and Executive

Ford was first elected to the Oklahoma House of Representatives in 1966. A Republican, he spent his entire career in the minority but managed to have a strong influence, particularly as it concerned Tulsa.

Gov. Kevin Stitt announces a $1,200 return-to-work incentive in a press conference at Freymiller Trucking in Oklahoma City on Monday.