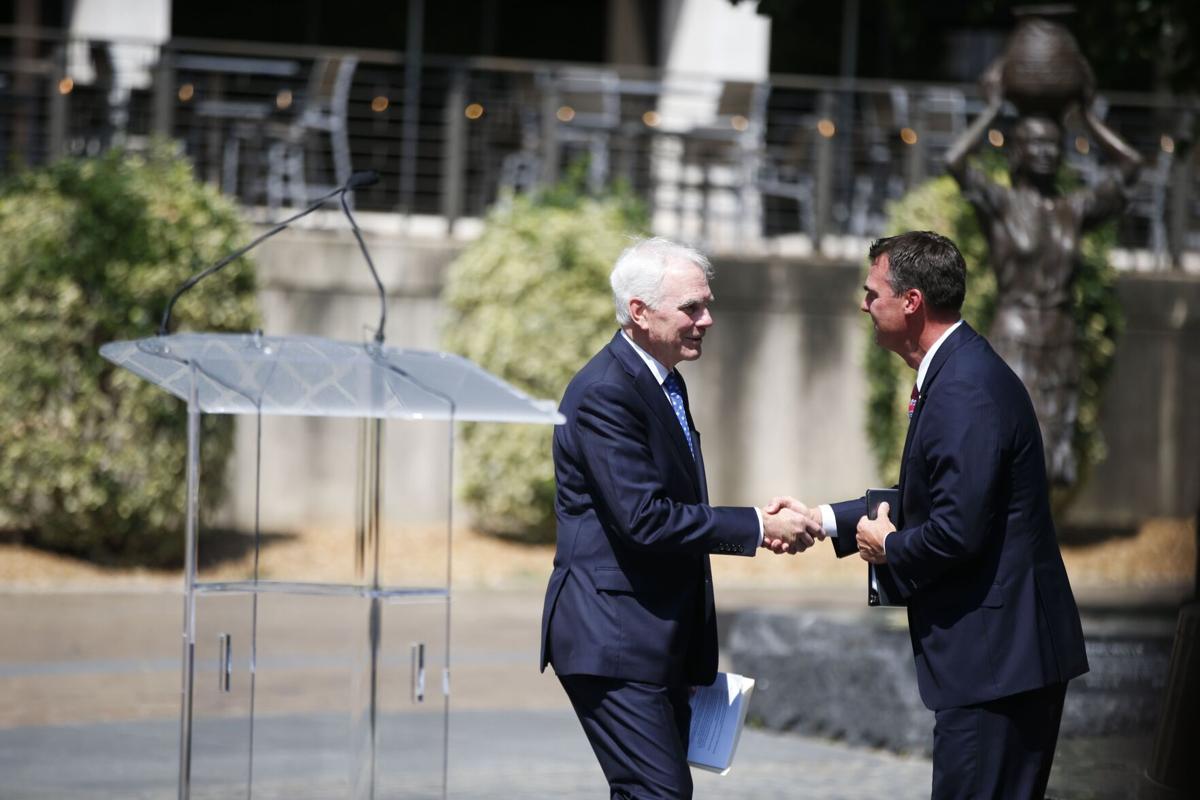 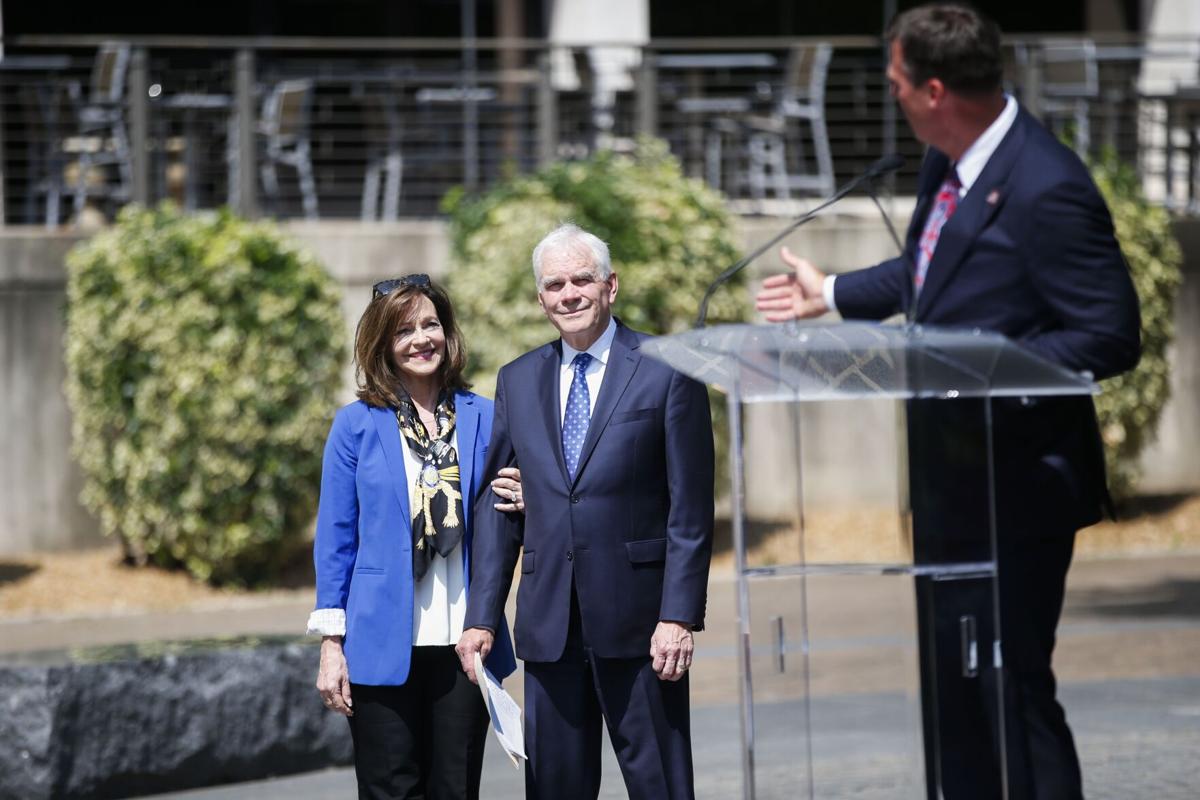 Gov. Kevin Stitt announces his appointment of Tulsa attorney John O'Connor, seen with his wife, Lucia O'Connor, to the position of Oklahoma attorney general in Tulsa on Friday. 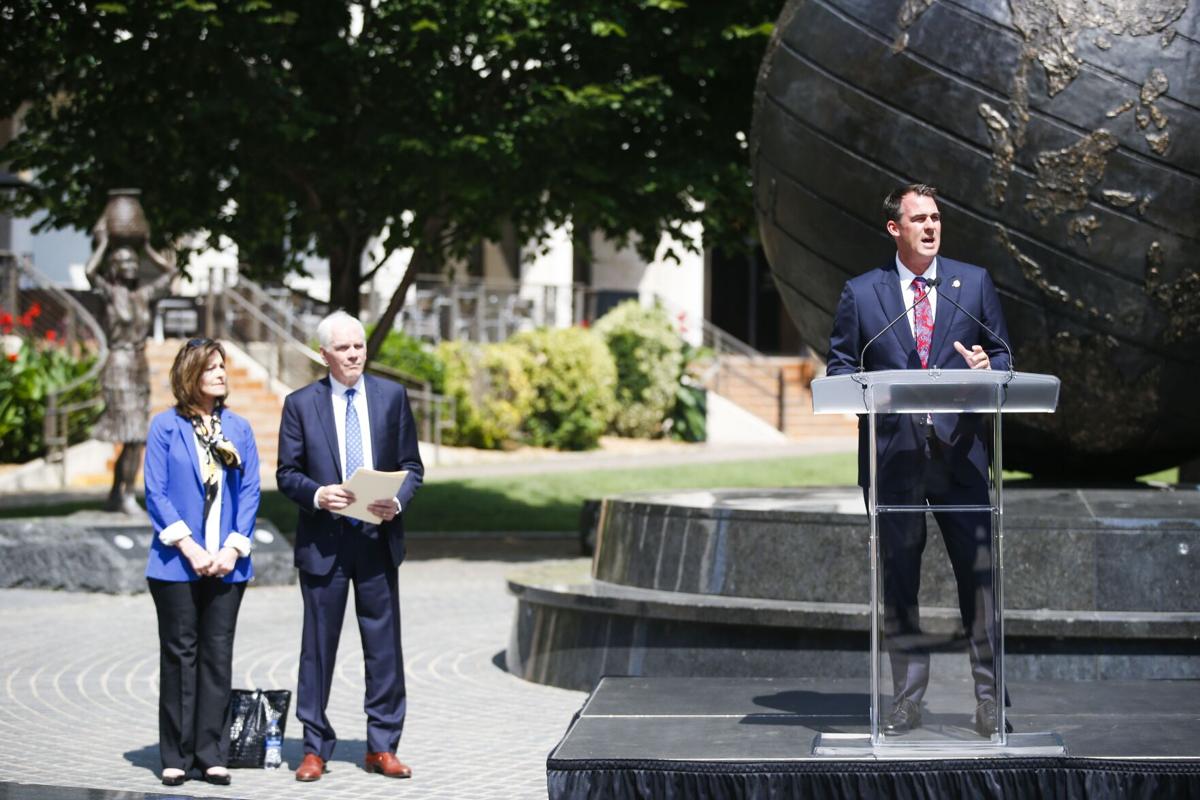 Gov. Kevin Stitt announces his appointment of Tulsa attorney John O'Connor, standing with his wife, Lucia O'Connor, to the position of Oklahoma attorney general at Rotary Plaza in downtown Tulsa on Friday. 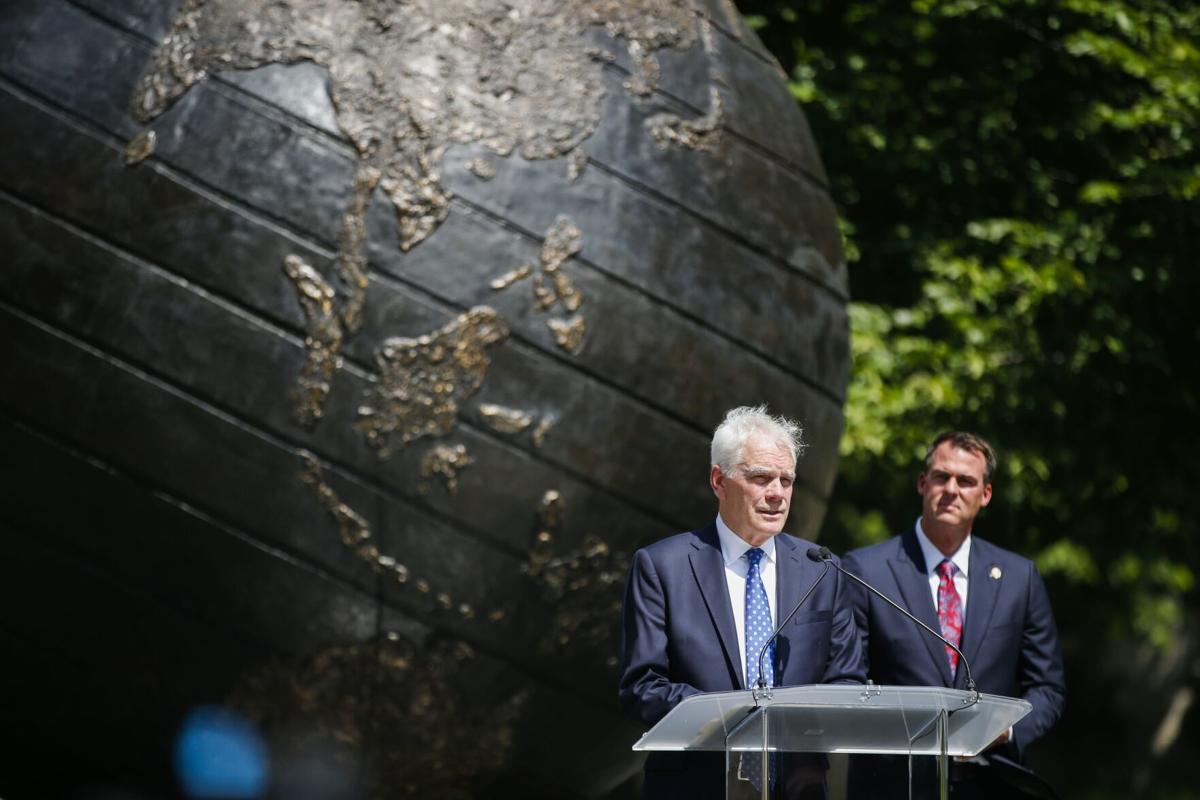 Stitt didn’t directly answer the question, but O’Connor did.

O’Connor enthusiastically supported Stitt’s avowed desire to win a reversal, or least a clarification, of last year’s McGirt v. Oklahoma U.S. Supreme Court decision and to take on whatever else comes along.

And he said he’s in it for the long haul.

“I want to get my hands dirty, and that will take longer than 16 months,” O’Connor said during a press conference at the Rotary Plaza in downtown Tulsa.

O’Connor, 66, who is filling Hunter’s unexpired term, thus dispelled speculation that he is only a caretaker until the 2022 election.

“I am absolutely going to be a candidate for attorney general in 2022,” he said.

Presumably, O’Connor will do so with the backing of Stitt, who often did not see eye-to-eye with Hunter, particularly in dealing with the state’s tribal governments.

Stitt said he chose O’Connor because “it was so important to me to find someone who was highly competent in the law, but more importantly I was looking for someone of high moral character who will do the right things for the right reasons and never for personal gain. … We needed someone who will fight and defend what’s best for all 4 million Oklahomans.”

This closing comment has in the past been something of a code phrase for Stitt in referring to tribal relations, first with his fight over gaming revenue and more recently in dealing with the McGirt v. Oklahoma decision, which has drastically reconfigured the state’s relationship with its largest tribal governments.

Still, O’Connor said he is open to working with the tribal governments.

“I have high regard for the tribes,” he said. “We’ve all grown up with the tribes as our neighbors, and they’ve been good neighbors. This positive and productive relationship between the state and the tribes that’s existed so long needs to be restored.”

O’Connor said McGirt “upset” a “balance” and that the ruling should be more explicitly limited to major criminal cases if it is not overturned.

O’Connor’s 40-year legal career has focused on business law, and he has never held or been a candidate for public office. He was nominated for a federal judgeship in 2018, but the nomination stalled because of opposition from the American Bar Association and reportedly because then-President Donald Trump favored a younger candidate.

In a letter to the Senate Judiciary Committee, the ABA said O’Connor was “not qualified in the areas of professional competence and integrity.” It listed what it said were “ethical concerns,” all of which O’Connor disputed.

On Friday, U.S. Sen. Jim Inhofe brushed off the ABA controversy and said, “I love the guy.”

During a confirmation hearing for the judgeship, O’Connor said he considered the Roe v. Wade decision on abortion rights settled law, but Friday he indicated a desire to see it reversed.

“If a Roe versus Wade case makes it to the United States Supreme Court, then absolutely I will want to file an amicus brief in that matter,” O’Connor said. “I think that we will pay the price for abortion. … Sometimes the Supreme Court gets it wrong. We all know that.

“The Supreme Court is usually right,” he said. “Sometimes even they make a mistake.”

O’Connor’s intention to seek a full term sets up a possible all-Tulsa GOP primary with fellow Tulsa attorney Gentner Drummond, who announced his candidacy within days of Hunter’s resignation.

“While I respect his (Stitt’s) authority to appoint a candidate of his choosing, my passion to serve as the next elected Attorney General remains undaunted,” Drummond said in a written statement.

“I have been campaigning across the state for the past several weeks, building support and sharing my belief that Oklahoma needs a strong, independent leader who will take bold action to fight corruption, defend our liberty, and uphold the rule of law.”

What's it like to sit by Drake at a Thunder game? Meet his 'new parents' from Oklahoma

“I knew his name was Drake,” Renee Stanley told The Oklahoman, “but I didn’t know he was a rapper, and I didn’t know how popular he was. But let me tell ya, everybody else around me let me know.”

A newly formed group called Conservative Voice of America, with no information about its funders, recently purchased ads on the Fox News Channel going after the Republican governor as soft on crime.

A truck attempting to pass two vehicles in a no-passing zone crashed, killing a 39-year-old Dibble woman and two passengers, 18 and 15; a 2-year-old girl was hospitalized in good condition.

Gov. Kevin Stitt on Wednesday said a roadway improvement project under discussion will cost more than $1.3 billion and involve state and federal dollars.

The man's identity has not yet been determined, and his cause of death is pending, a spokesman said.

Fort Gibson woman killed after crashing into back of tractor-trailer, troopers say

Troopers don't know what caused the woman to run off the road to the right into a parked vehicle on the shoulder about four miles south of Broken Arrow.

PERRY — Authorities are investigating after a helicopter crashed in Oklahoma, killing one person and injuring another.

A Baptist minister with a high priority on banning legal abortion since entering public office more than a dozen years ago, Lankford has spoken on the Senate floor and at Senate press conference, made the rounds of conservative-oriented news programs and gotten an opinion piece published on the Fox News web site.

Despite his star power, Caleb Williams has always been a team before self type of guy

Gov. Kevin Stitt announces his appointment of Tulsa attorney John O'Connor, seen with his wife, Lucia O'Connor, to the position of Oklahoma attorney general in Tulsa on Friday.

Gov. Kevin Stitt announces his appointment of Tulsa attorney John O'Connor, standing with his wife, Lucia O'Connor, to the position of Oklahoma attorney general at Rotary Plaza in downtown Tulsa on Friday. 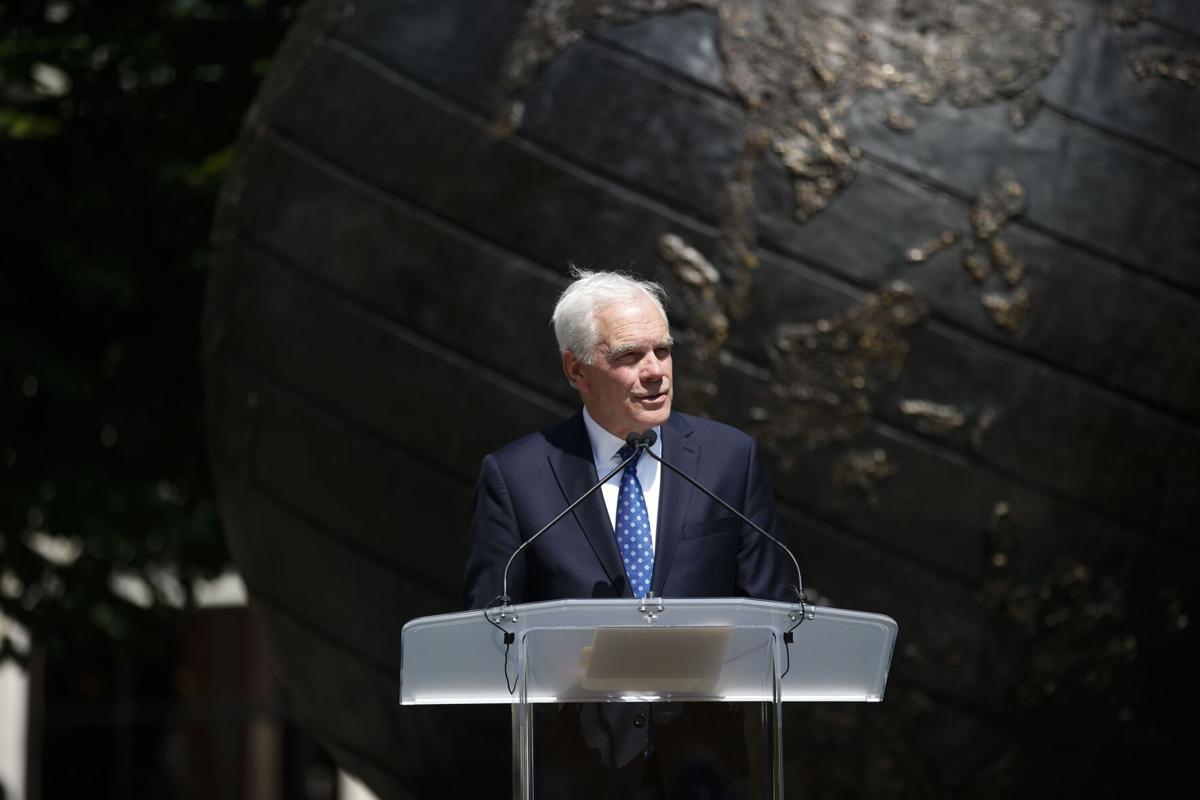