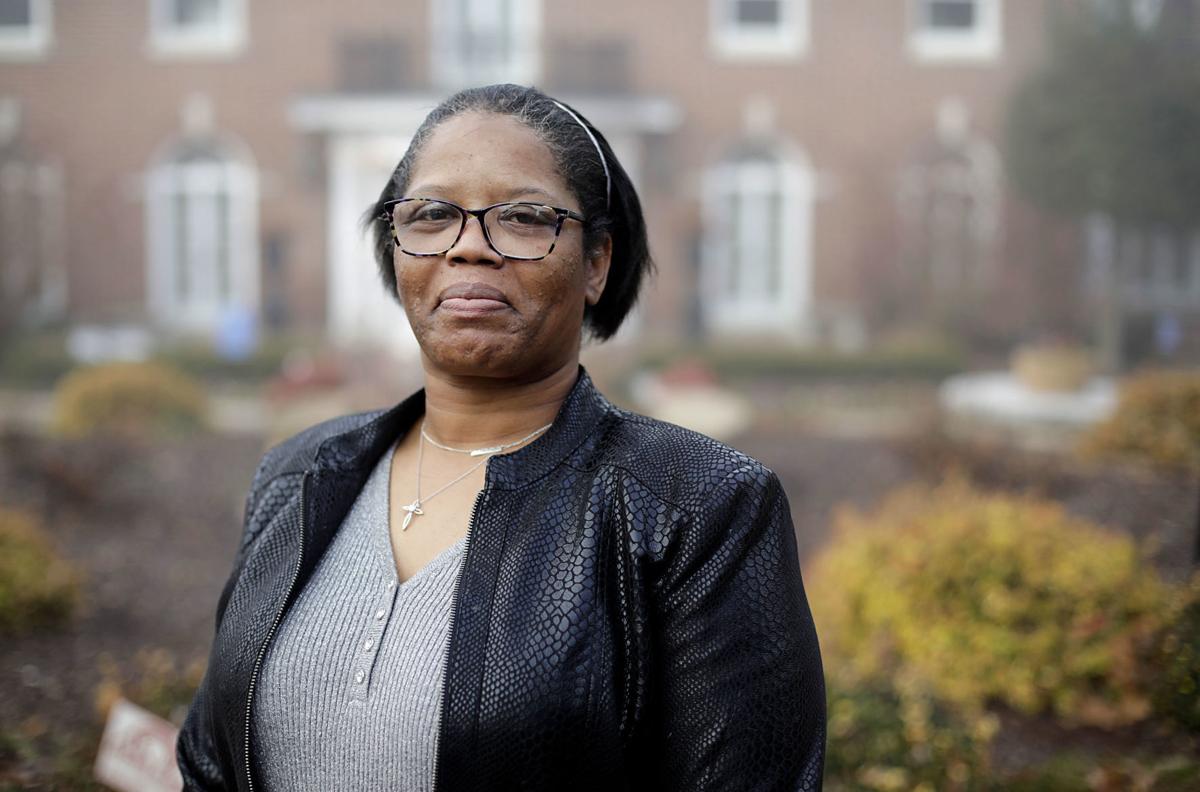 Out of prison for a year, Felicia Witherspoon holds down three jobs and is continuing the process of escaping the “vicious cycle” of meth addiction. MIKE SIMONS/Tulsa World 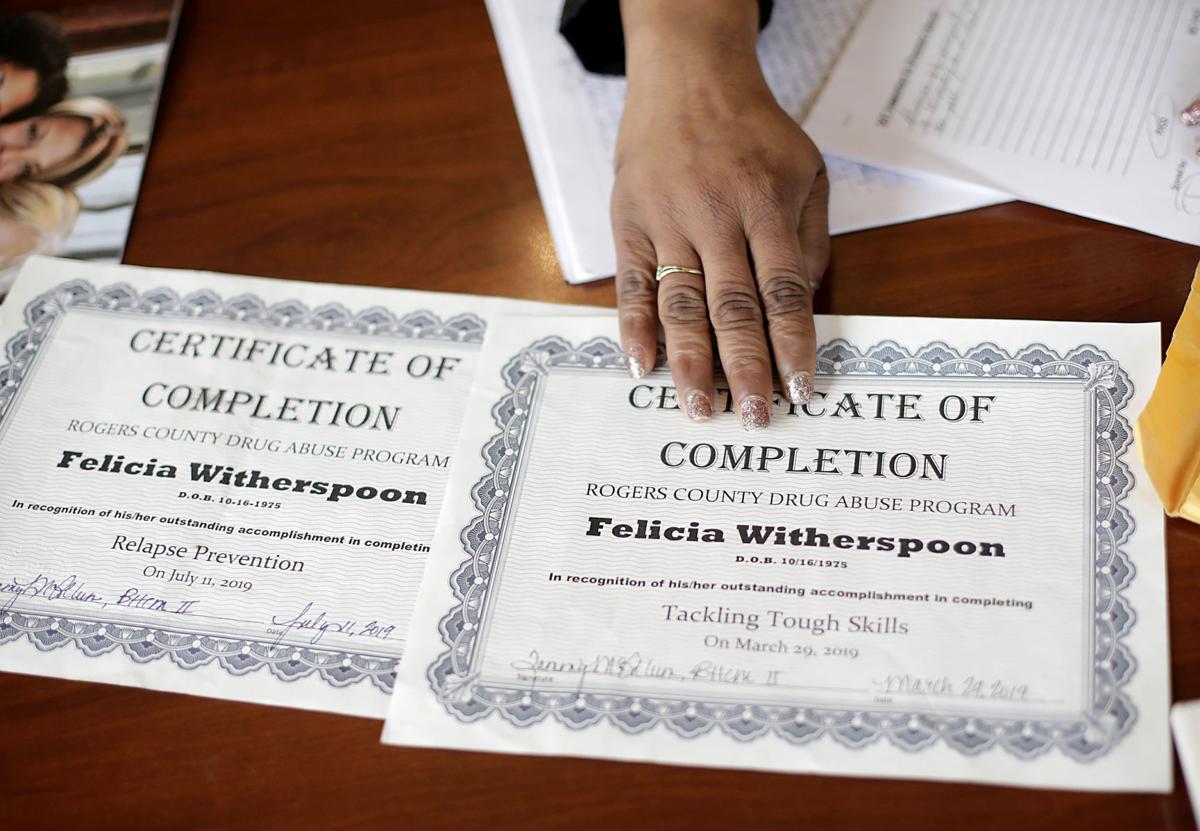 Felicia Witherspoon speaks about some of her accomplishments at Resonance Center for Women last week. 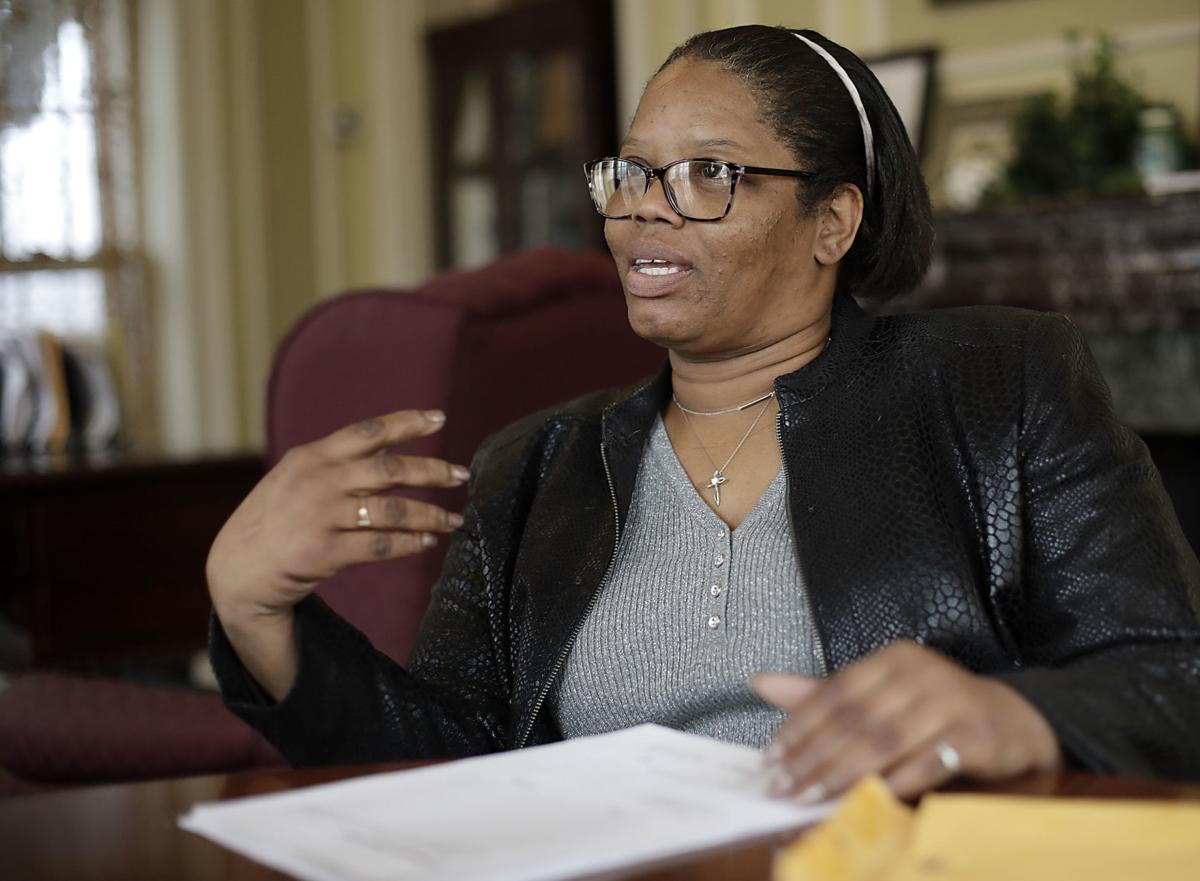 Felicia Witherspoon speaks during an interview at Resonance Center for Women last week. 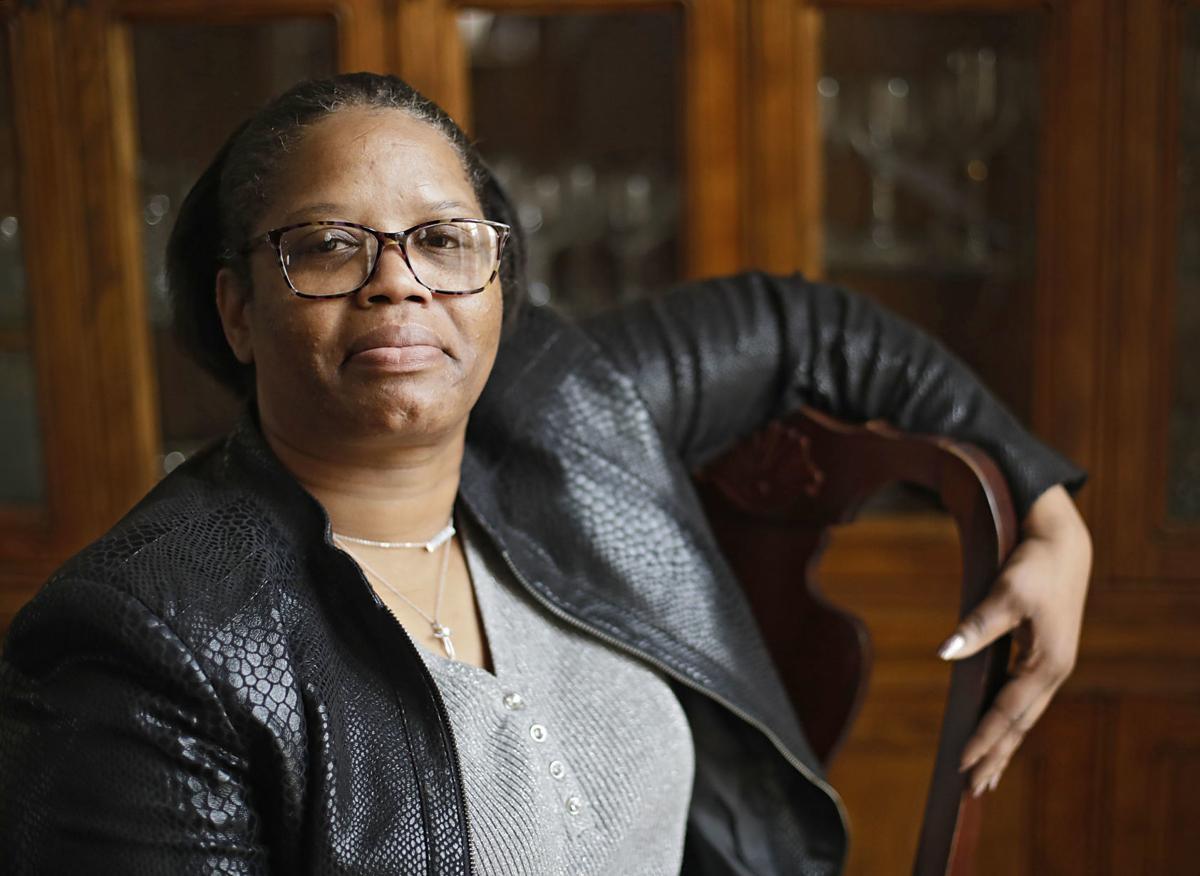 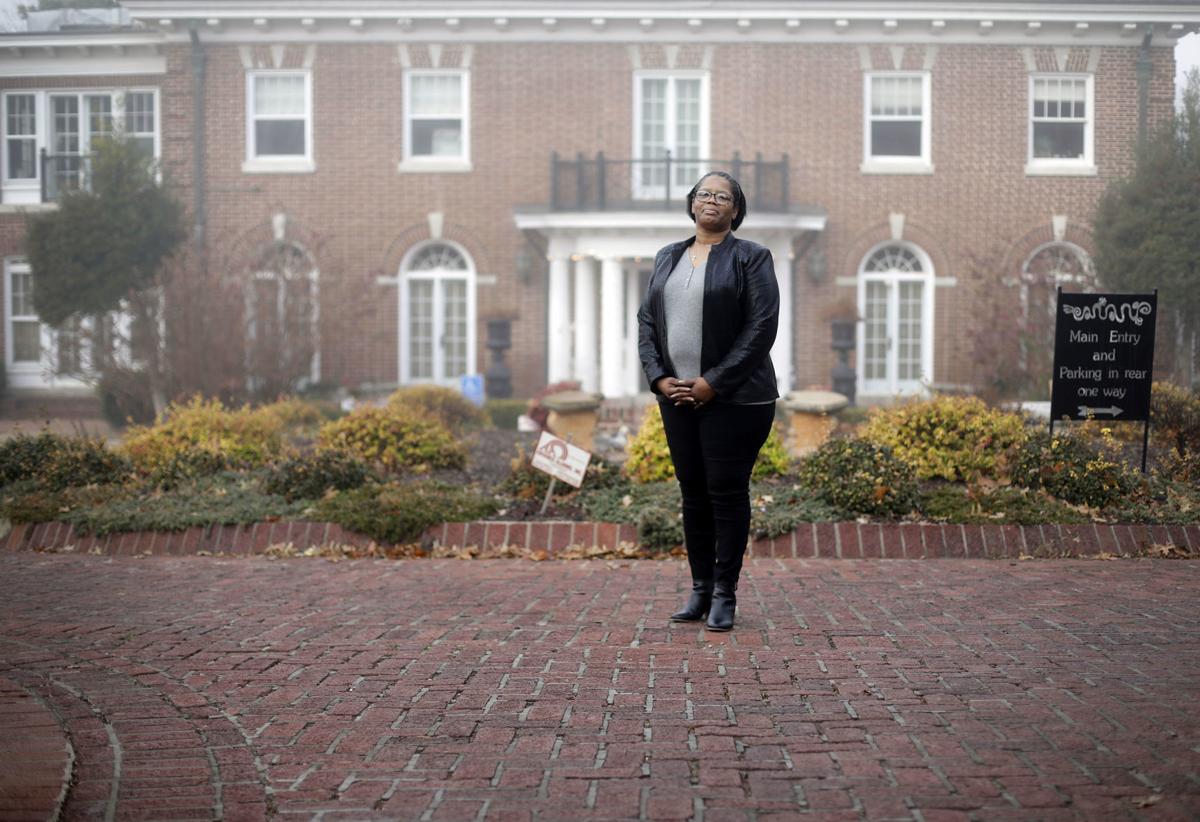 One thing hasn’t changed for Felicia Witherspoon since she was released early from prison a year ago — her work ethic.

She held down three jobs behind bars. Now, she has three jobs as a free woman recovering from drug abuse. She’s been sober for nearly three years as she sets herself up to pursue her GED.

Witherspoon, 44, was among the first wave of 30 people whose simple drug possession sentences were shortened to time already served as part of Project Commutation. She served 22 months of a 20-year sentence for methamphetamine possession.

She lives in transitional housing in Claremore through Rhonda Bear’s faith-based re-entry group, attends church and has graduated from several recovery programs as she escapes her “vicious cycle” of meth addiction.

“If I keep doing what I’m doing, it’s going to get better and better,” she said in a recent interview with the Tulsa World. “I ain’t gonna forget where I came from, but I don’t ever want to go back there. That’s why I keep myself focused. I journal, read my Bible and keep myself surrounded by people of faith that are doing good and want to see me doing good.”

The Tulsa World reviewed the status of the 30 whose cases were commuted by Gov. Mary Fallin.

• Together, they owe hundreds of thousands in court debt, or nearly $10,000 each on average.

• Nearly two-thirds have paid some toward their fines and fees.

Resonance Center for Women is the case manager for the 22 females who were released on commuted sentences. The statuses of five — including one who moved to Kansas to live with her husband and children — aren’t known because they haven’t kept in contact with Resonance.

Two of the 17 face new charges, one of whom already pleaded guilty and is serving time.

House Bill 1269 made State Question 780 retroactive, paving the way in November for a national record 462 offenders to be released in a single day.

Cathy Hodges, re-entry director for Resonance, said she was pleasantly surprised when she looked at the data of the original 30 who were freed a year ago in the special effort.

She said it’s important to keep in mind that this is a transient-type population. So on the whole, they have been “pretty motivated” to make the most of the opportunity.

“I just think that they’ve done remarkably well as a group,” Hodges said.

There were eight men released on commuted sentences, one of whom died in the past year.

The Tulsa County Public Defender’s Office, the main orchestrator of Project Commutation, has current contact information on three of the men. All three have housing and two have jobs, with the third recently out of work through no fault of his own.

The 30 offenders cumulatively owed $291,000 in fines, fees and court costs at release, of which $210,000 was on cases that were commuted, according to a Tulsa World review of online court data. Collectively so far, $9,700 has been paid.

But it’s not just court debt that can burden those released from prison.

Tulsa County Assistant Public Defender Glen Blake said one of the commuted men was pulled over for speeding and ended up being arrested because of a possession of a stolen vehicle warrant from 1995.

The man had been incarcerated the past 25 years, so the warrant had sat dormant in the system. Blake said “thank goodness” Tulsa County District Attorney Steve Kunzweiler was reasonable and dropped the case when presented with what happened.

“But it just goes to show, sometimes it can just never seem to end,” Blake said.

Exiquio Gonzalez has not slowed down since his release from prison after his life sentence for conspiracy to traffic marijuana was commuted.

“Actually, it’s been going great,” Gonzalez said, when asked in an interview.

The 44-year-old had served about four years of his life sentence when his sentence was commuted.

He said he landed a job about eight months ago as an aircraft technician in Oklahoma City, work with which he had prior experience.

He said he also works at a non-profit center, mentoring kids. He hopes one day to be able to tell his story to youths held in detention centers.

“Kinda let them know just because they made a mistake, it doesn’t define us,” Gonzalez said. “There’s a lot more out there in life.”

Gonzalez said he has also been taking courses at Southern Nazarene University, where he is scheduled to graduate next October with a bachelor’s degree in organizational leadership.

Still, Gonzalez said he thinks he could be doing even more.

“I get down on myself because I’m not where I think I should be,” Gonzalez said. “But people tell me I’m a lot further than a lot of other people, even those who have not been to prison.”

He credits a “great support system” with his success since being released from prison.

And while his prison term may have been commuted, his court fees and fines were not erased.

Since June, Gonzalez has been making $25 monthly payments to the district court to retire his debt.

“I think it’s for the long term,” Gonzalez replied, when asked how long he thought it would take him to pay off the court debt.

Despite all he has achieved so far, Gonzalez said he hopes to achieve more in the coming months.

“By this time next year, God willing, I’ll own my own home,” Gonzalez said.

Witherspoon, meanwhile, had an issue in which a warrant was wrongfully issued for her arrest. It popped up on a background check, preventing her from receiving a promotion to shift manager at McDonald’s.

Somehow a failure-to-have-insurance ticket from 2014 was entered into the system twice. She presented her receipts showing she had paid it off to get her license re-instated and the duplicate was wiped.

With that cleared up, Witherspoon said she is back in line for that promotion.

“It really didn’t affect me, but it showed me I can talk to these people and not be scared and know I’m doing something correct and positive and not running or hiding from them,” she said.

'It was a murder in the full light of day': Biden

Legislation that would have allowed state agencies to circumvent the state auditor and inspector for required audits went down in flames in the House Appropriations and Budget Committee after the House sponsor refused to let Auditor and Inspector Cindy Bird, who was in the room, answer questions.

Sen. Rob Standridge, the Senate author, said the measure is in part due to a May 31 incident in Tulsa where a family vehicle and trailer were attacked after protestors occupied a roadway.

Out of prison for a year, Felicia Witherspoon holds down three jobs and is continuing the process of escaping the “vicious cycle” of meth addiction. MIKE SIMONS/Tulsa World

Felicia Witherspoon speaks about some of her accomplishments at Resonance Center for Women last week.

Felicia Witherspoon speaks during an interview at Resonance Center for Women last week.