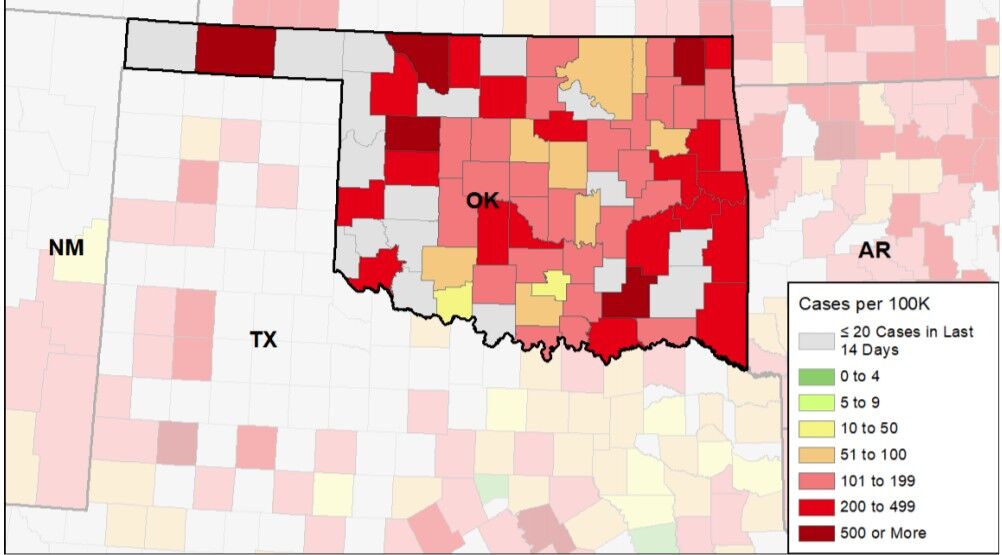 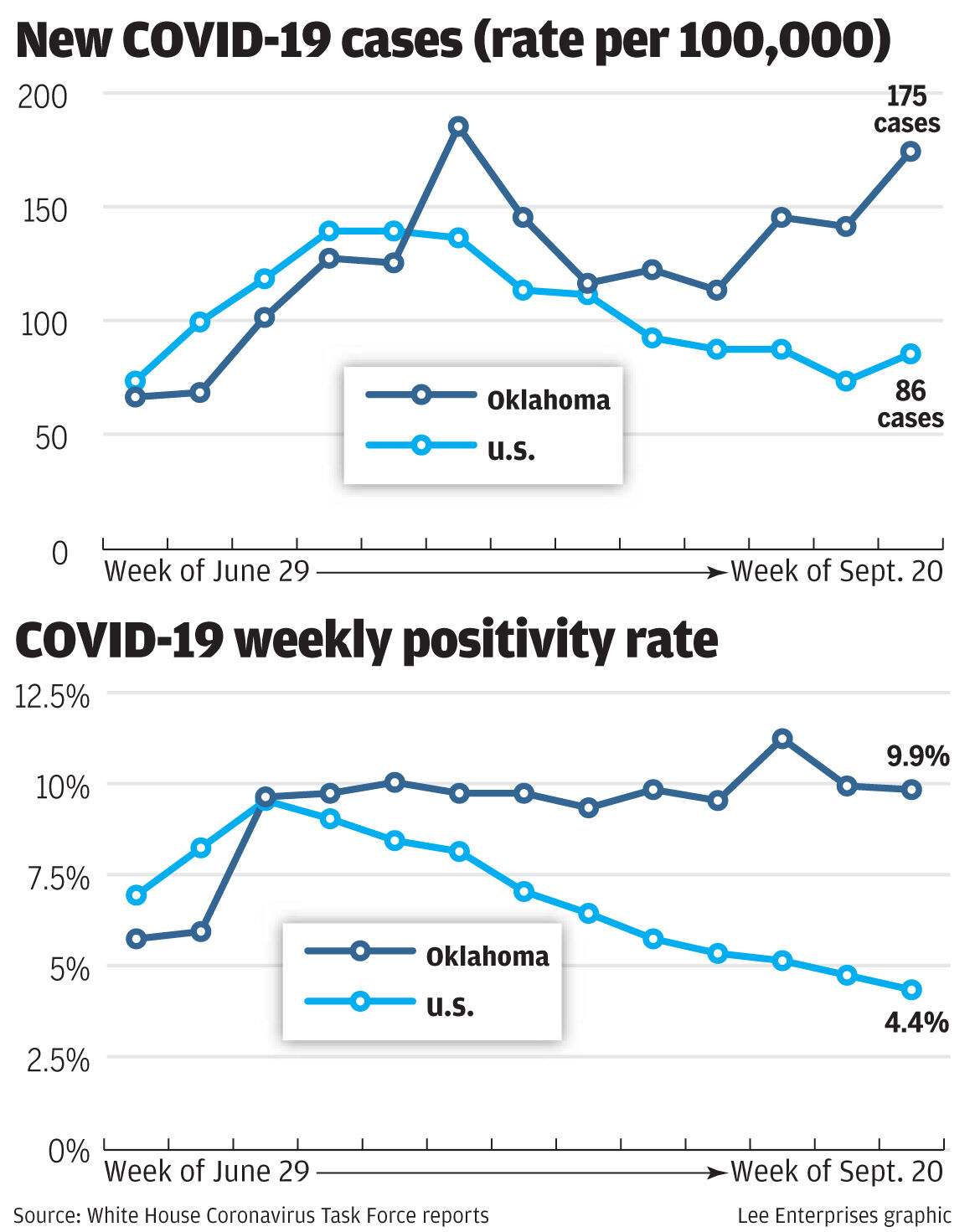 The state’s positivity rate essentially held steady at 9.9% from 10.0% the prior week. Oklahoma’s national positivity ranking rose to No. 3 from No. 5.

The latest Oklahoma report is dated Sept. 20 and is based on data from Sept. 12-18. The state releases the White House reports at noon Wednesdays.

The task force now has introduced orange in its report as a color level between yellow and red. Red and orange both represent high levels of spread, while yellow depicts moderate transmission.

The state’s test positivity is in the orange and, if that category had existed previously, Oklahoma would have been in it or the red since the July 14 report.

September on pace for ‘our worst month’

OSU Center for Health Sciences hosts a COVID-19 response meeting each Wednesday morning. The virtual session is part of its Project ECHO (Extension for Community Health Care Outcomes) to bring medical education and care management to rural and under-served areas.

“If you look at the trends from month to month, September is well on its way to being our worst month in Oklahoma,” Clark said.

Clark explained that on Tuesday the state hit a similar seven-day case trend compared to its peak in July. She said the trend is likely to increase without changes to major public health efforts after Labor Day weekend, along with the resumption of fall sports and large gatherings.

She also noted that “probably week after next” is when Oklahoma will start seeing a related increase in COVID-19 deaths. The seven-day moving average of deaths in the state peaked at 10.4 per day at the end of August and is now down to 6.6 as of Wednesday.

“So until we get through the Labor Day weekend surge, which we probably won’t see the full impact of for another couple weeks, and the continued additive effect of large public gatherings, we may see this continue to go up for the foreseeable future unless there are different efforts put into place to limit some of those public gatherings,” Clark said.

Gov. Kevin Stitt on Tuesday told reporters that Oklahoma’s mortality rate per capita is 60% below the national average and 14th lowest in the country based on CDC’s COVID data tracker.

However, that is a cumulative look since Jan. 21, with Oklahoma’s first confirmed case not appearing until March 6.

The White House task force analyzes COVID-19 death rates per capita by week, not cumulatively. The report pegged Oklahoma’s mortality rate from Sept. 12-18 in its newly created orange category and 24% below the U.S. rate — also in the orange.

The task force doesn’t rank states by mortality rate as it does for new cases and test positivity.

Stitt said that Oklahoma’s hospitalizations remain below 5% of all of the active cases in the state.

“We continue to have adequate capacity in our hospitals, but we still want obviously those numbers to continue to go down,” Stitt said.

Clark said hospitalizations as a fraction of active cases recently has hovered at about 5%, which is good but not without caveats.

The number of COVID-19 inpatients who comprise that 5% grows as the total active case count continues to climb.

“We’ve held steady with regards to that (5%), but as you can imagine when you get out of percentages and get into raw numbers, that starts getting a little bit tight for our health care system,” Clark said.

Areas in red, orange and yellow

For the second straight week, the coronavirus task force has softened its stance on its recommendation since Aug. 9 to close bars.

The report suggests that red and orange zones — or high levels of disease transmission — use “standard metrics” to determine school learning options and capacity for bars and indoor dining.

Each of these reports can be found online at coronavirus.health.ok.gov/white-house-coronavirus-task-force

The three murder victims of death row inmate Shaun Michael Bosse were members of the tribe.

Oklahoma has broken the overall COVID-19 hospitalization record seven of the past 10 weekdays the state has reported that data.

An attorney for an Oklahoma death-row inmate testified Wednesday that he has found new potential witnesses who might be able to help his client's case but who would be prevented from testifying by a state law because his client's appeals have been exhausted.

The Oklahoma State Department of Health weekly executive order report indicates that cases have risen by 15% and deaths surged by 16% since Oct. 9. Over the last 14 days, Oklahoma has seen deaths spike by 24% and cases increase by 17%.

COVID-19 cases again on upward trend in county; additional measures to be discussed

Officials reported 774 new cases, and 821 people were hospitalized across the state with suspected or confirmed COVID-19 infections.

Warren Hamilton, the Republican candidate running for the Oklahoma District 7 state Senate seat, said he disagreed with the newspaper requiring masks to follow a city ordinance and to help slow community spread of COVID-19.

The drugs have a street value of nearly $2 million. Five people have been arrested in connection with the case.

The death toll in the state rose to 1,154 with 105,308 cases confirmed in the state. Tulsa County reported 214 new cases Friday to bring the county’s seven-day average to 184.

Amid the swirling mayhem of 2020, Republican incumbent Kevin Hern and Democratic challenger Kojo Asamoa-Caesar have quietly gone about the business of trying to beat each other in the 1st Congressional District.