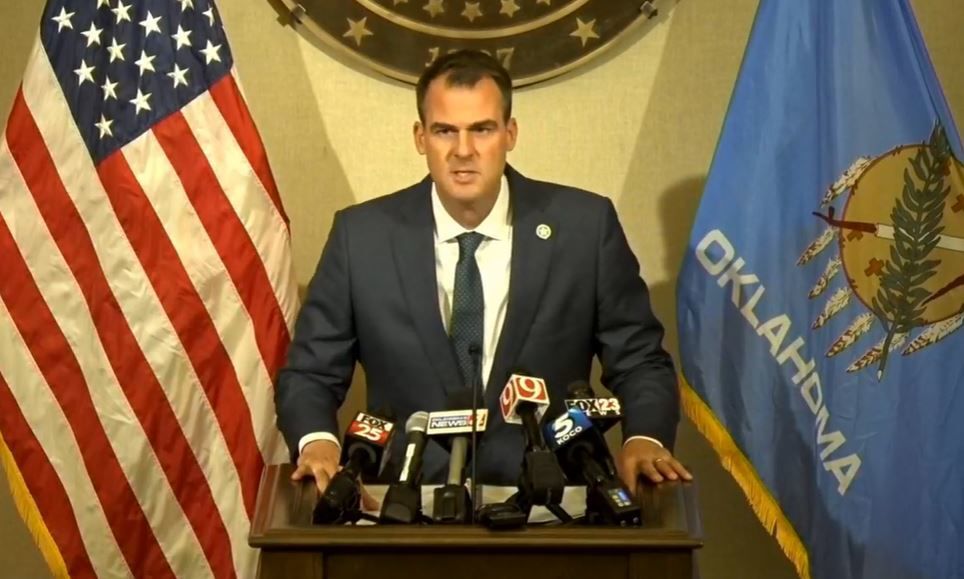 Gov. Kevin Stitt speaks during a COVID-19 briefing on schools reopening on Thursday in this screengrab from Facebook. 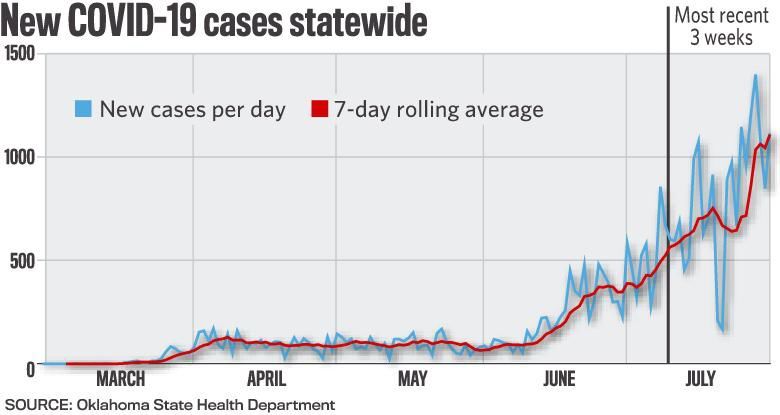 Gov. Kevin Stitt speaks during a COVID-19 briefing on schools reopening on Thursday in this screengrab from Facebook.

Oklahoma’s COVID-19 daily case average has doubled in three weeks, but Gov. Kevin Stitt repeatedly said it had “plateaued” Thursday as he downplayed concerns about the state’s surge.

“We’ve been on this plateau now for the last three weeks of number of cases,” Stitt told reporters and a Facebook live audience.

However, state data contradict the governor, showing a clear upward trajectory. The seven-day rolling average of daily cases climbed 96% in three weeks, reaching a record average of 1,110 cases on Thursday that is up from 565 reported July 9.

A Tulsa World reporter asked Stitt’s office for an explanation of his plateau comments and how he can reconcile them with a doubling of the daily case average in the time frame he used multiple times.

Baylee Lakey, communications director for Stitt, didn’t address the surge in daily positive cases in her email response. Instead, she cited two data metrics that Stitt didn’t reference in his remarks.

“As noted in the (Oklahoma State Department of Health’s) weekly Epidemiologist report, the percentage of positives cases this week is 8.9%, the lowest since July 3,” Lakey wrote. “Furthermore, when looking at the data based on onset of symptoms and the date COVID-19 tests were administered, Oklahoma has remained largely steady on the active presence of COVID-19 since July 18.”

However, state data show that active cases in Oklahoma have risen 70% during Stitt’s timeline of the past three weeks.

Stitt’s handling of the pandemic is drawing scrutiny at the federal level.

The chairman of a U.S. House of Representatives subcommittee tasked with investigating issues related to the coronavirus pandemic noted that a July 26 report from the White House Coronavirus Task Force “provides a dire assessment of the situation in Oklahoma … .”

The chairman’s July 29 letter states that the subcommittee’s review found that Oklahoma doesn’t appear to be following at least five different recommendations from the Task Force and is only partially complying with another.

Depending on whether a county is considered to be a hotspot or is nearing becoming one, the recommendations include caps on social gatherings, closing bars, reducing indoor dining capacity to 25%; limiting gyms to 25% of their occupancy capacity; ensuring that retailers and personal services require masks and safe social distancing; and implementing mask mandates.

“The Task Force report privately recommended that Oklahoma implement these health measures to help reverse the dangerous spike in cases across the state and to prevent unnecessary deaths,” wrote the subcommittee chairman, U.S. Rep. James Clyburn, D-S.C. “Failure to comply is allowing the virus to spread, prolonging and exacerbating the public health crisis facing the state.”

When a reporter asked the governor about the document Thursday, he called the letter a “political statement.”

Stitt said he’s on calls with the president, vice president and 49 other governors every week, looking at the recommendations and making decisions based on the facts in Oklahoma.

“What you’re talking about is, I think, a subcommittee inside Congress that really is just trying to make a political statement either against the president or our state,” Stitt said. “I don’t know exactly where it’s coming from.”

Stitt again highlighted the state’s color-coded COVID-19 alert system, which he rolled out July 9 in response to Coronavirus Task Force recommendations to “give counties some level of assurance.”

However, public health officials in Oklahoma have called the alert map unhelpful.

The system uses county-specific rates of new coronavirus cases to determine whether a county is “new normal,” low risk, moderate or high risk.

But the only way a county can become high risk is if the number of hospital beds or ventilators drops below 5% or the amount of personal protective equipment statewide drops below five days’ worth, regardless of whether an individual county’s hospital system is overwhelmed.

In a separate news conference Thursday, Tulsa Health Department Executive Director Bruce Dart broached the topic of the Coronavirus Task Force report and the state’s color-coded alert system by saying, “There’s issues, I think, with both criteria, to be perfectly honest.”

Dart said Tulsa County has local data and that local data should be the basis for decisions. He said he had read some excerpts from the White House document about closing bars early and reducing restaurant capacity to 25% capacity.

“I don’t know of any business that can function and make a profit at 25% capacity. And, frankly, here in Tulsa County that’s not our main risk,” Dart said. “For here we talk about gatherings. Our main concern right now — the data’s telling us — is things like weddings, camps, sport-related gatherings, long-term care facilities, and we’re starting to see a few cases out of child care.”

Dart said the state’s alert system “isn’t going to be real helpful to us” unless it uses a regional concept for hospitalizations rather than statewide metrics.

“If our hospitals are exceeding capacity here and there’s hospital beds elsewhere, we still won’t meet their high-risk, or red, category,” Dart said.

Bratzler said the color-coded map “is not helpful at this point.” He noted how the state was mostly one color even though there are ongoing and specific hot spots in the state.

He also called it “unrealistic” for the state to suggest that it will transfer patients from a Tulsa hospital, for example, to a small rural hospital simply because it has an available bed.