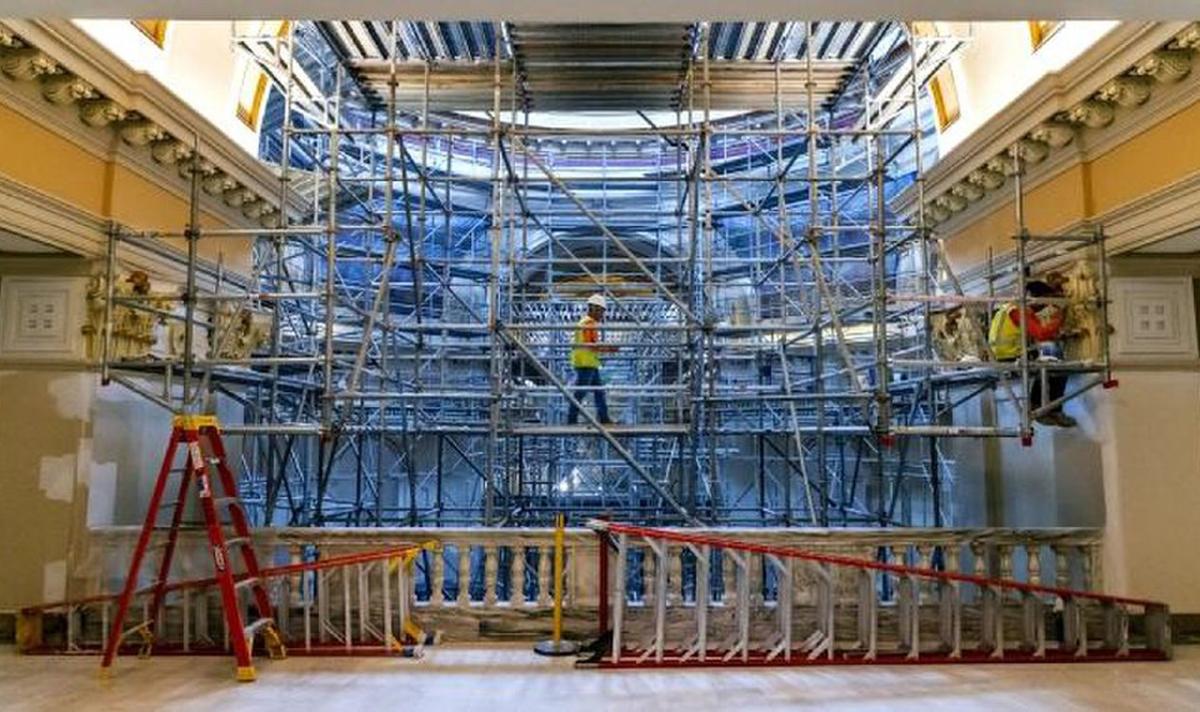 Scaffolding extends through the rotunda at the Oklahoma Capitol as renovations continue. CHRIS LANDSBERGER/The Oklahoman 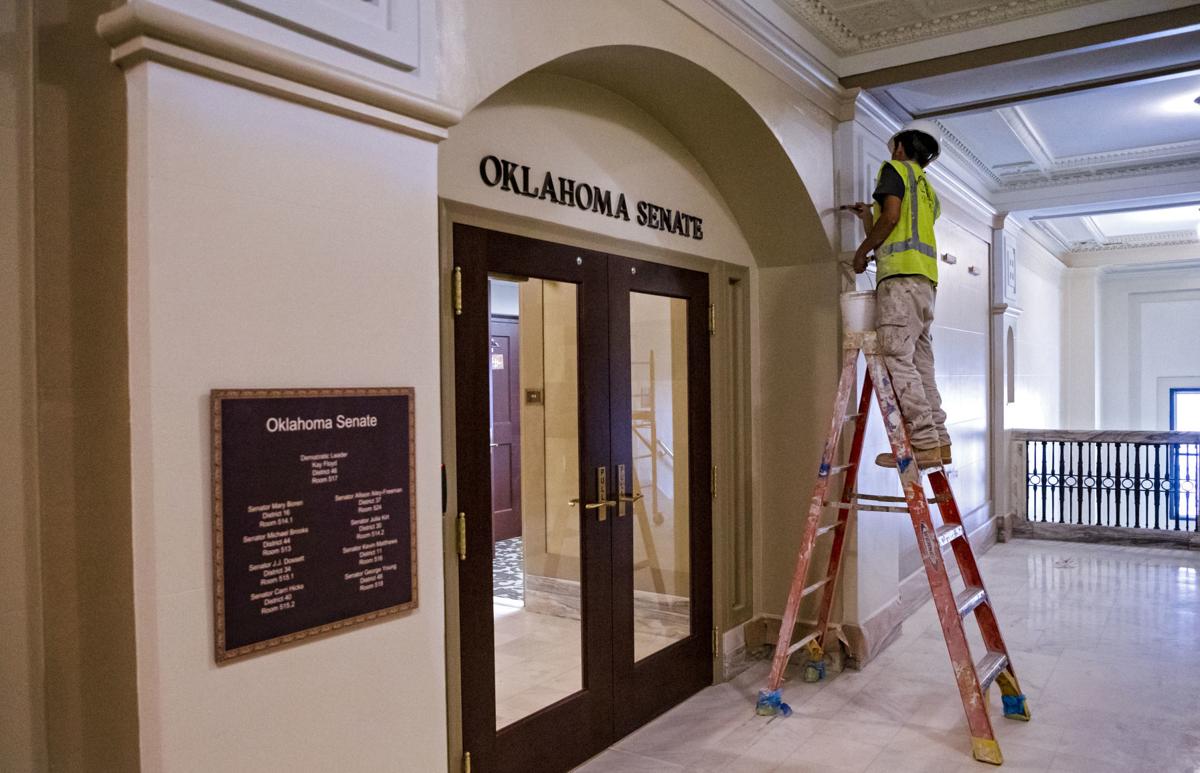 A worker paints the entrance to the Senate Chamber in the east wing of the Capitol. 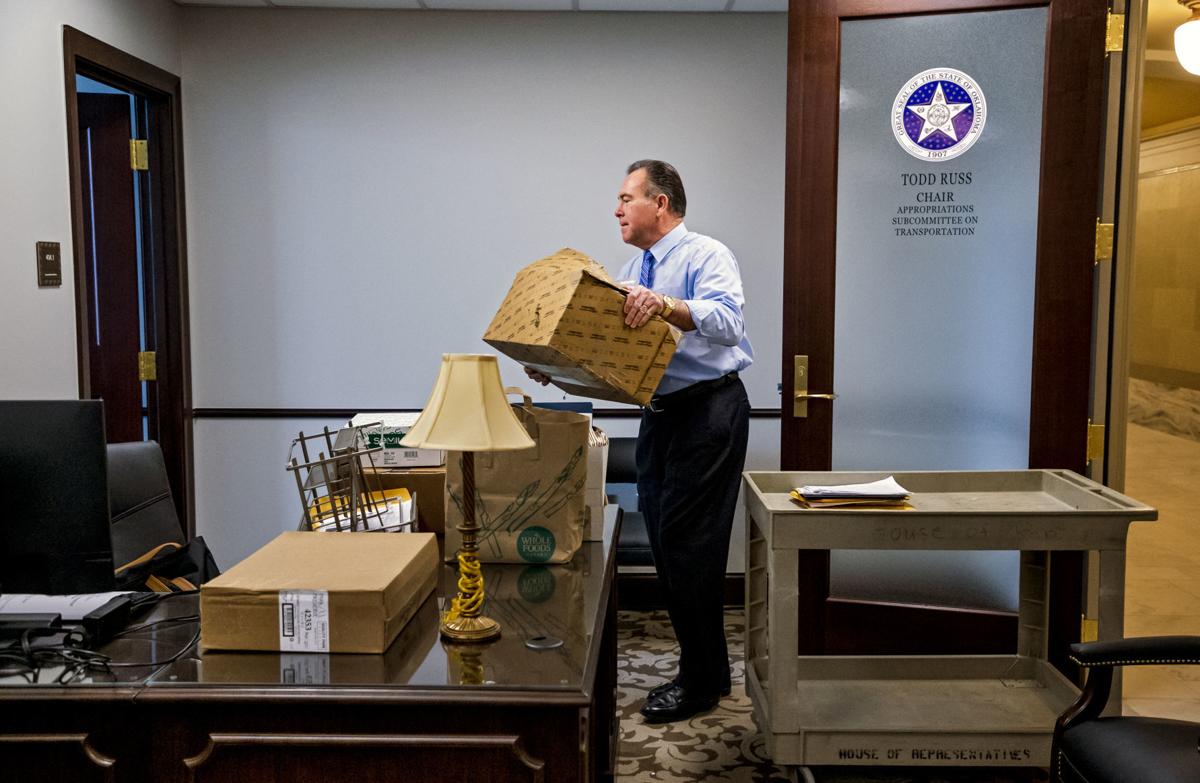 Rep. Todd Russ unloads items from a cart as he moves back into his newly redone office at the state Capitol on Jan. 16. 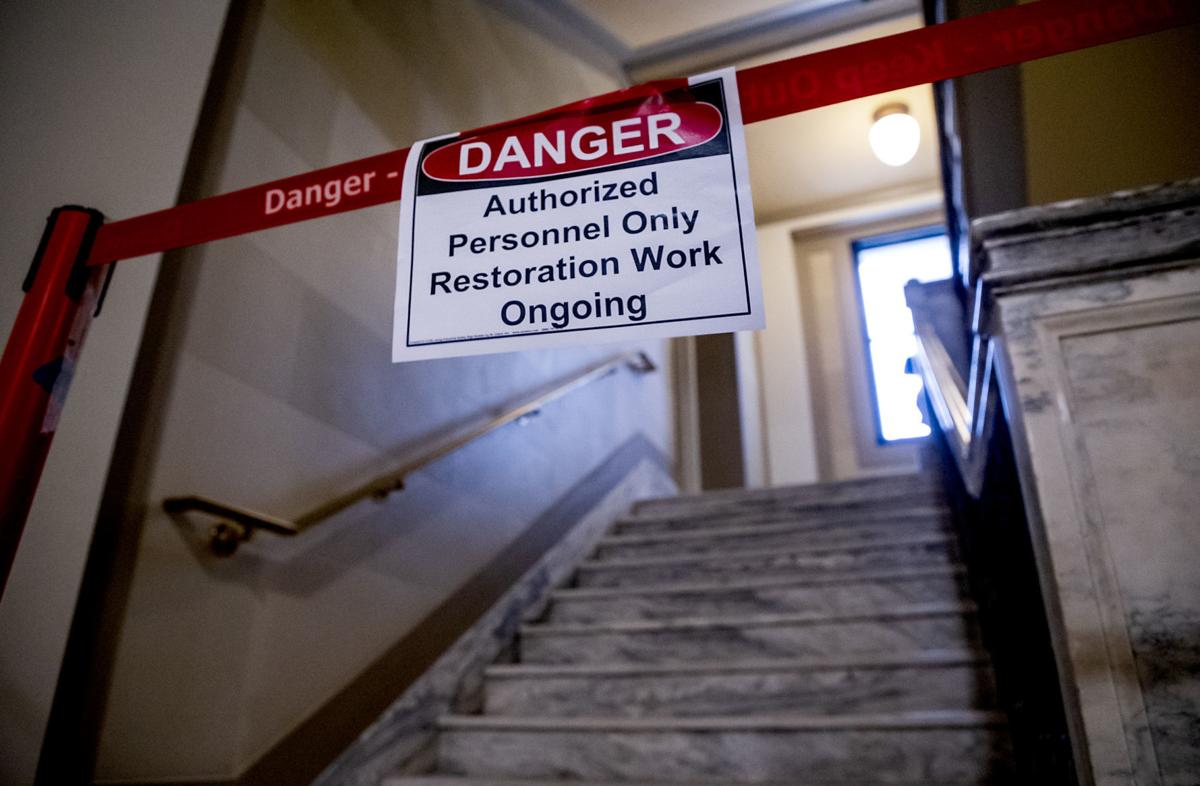 OKLAHOMA CITY — Visitors and lawmakers returning to the Capitol on Monday for the next legislative session will find a construction zone.

The rotunda on the first and fourth floors will be closed to the public while repairs are made, said Trait Thompson, Capitol project manager.

Repairs are being made to the plaster and marble, Thompson said. In addition, the area is being repainted.

But fourth-floor corridors and offices will be accessible.

The second-floor rotunda will be open and available for reservations for events, Thompson said. But scaffolding will still be present in the middle, rising from the first floor, as a means to move large items through the building, he said.

The building is also getting a new copper roof.

Work continues on elevators and restrooms.

Three elevators instead of four will be in service, Thompson said.

For years, the Capitol has been plagued with plumbing, electrical and structural problems.

Lawmakers approved $245 million in bonds for the repairs, which began in the summer of 2015.

The project is expected to be completed in the spring of 2022.

“Working in an active construction zone has its challenges, but as long as you pay attention and heed the warning signs, things turn out great,” said Senate Pro Tem Greg Treat, R-Oklahoma City.

“The renovation and repair project was long overdue,” he said. “The Capitol is an important symbol of our state and the seat of our government, so it is appropriate that its functionality and appearance hold up to that standard.”

House Speaker Charles McCall, R-Atoka, said the completed project will result in a better experience for the public to interact with its government.

“Until it is done, though, we are encouraging the public to build in some extra time when they visit the Capitol, as it is an active construction zone,” McCall said. “Please come to the Capitol, but please be patient.”

Work has been finished on all of the major mechanical rooms in the building, and the plumbing below the slab has been completed, Thompson said.

Numerous areas inside the building have also been completed, including the Governor’s Office, governor’s large conference room and Secretary of State’s Office, Thompson said.

The ceremonial Oklahoma Supreme Court courtroom on the second floor has been restored.

The new visitors entrances located on the ground level, which used to be called the basement, will be ready to open in June, Thompson said.

Officials continue to get complaints about dust and noise, he said.

“We monitor the dust levels in the building to make sure they are not getting above OSHA (Occupational Safety and Health Administration) recommended levels,” he said. “Noise is going to be a constant factor in the building because we are still trying to do construction projects, although we try to limit noise during session as much as we possibly can.”

Overall, the project is on budget and ahead of schedule, Thompson said.

What bills are still alive for Oklahoma's 2020 legislative session?

How to contact your Tulsa-area lawmakers in the Legislature

For the first time since May, the number of active COVID-19 infections in Oklahoma has dropped, but that doesn't mean hospital systems are "out of the woods" in dealing with often-fatal cases.

Editorial: Get a vaccine to honestly honor those who died from COVID-19

Watch Now: Cherokee Nation launches effort to repair or replace homes: 'Too many elders and veterans are living in substandard housing'

The tribe will finish 150 home renovations and completely replace another 50 homes by the end of next year, officials said.

Scaffolding extends through the rotunda at the Oklahoma Capitol as renovations continue. CHRIS LANDSBERGER/The Oklahoman

A worker paints the entrance to the Senate Chamber in the east wing of the Capitol.

Rep. Todd Russ unloads items from a cart as he moves back into his newly redone office at the state Capitol on Jan. 16.