Subscribe
Read Today's E-Edition
Share This
'It's a crisis': COVID-19 hospitalizations soaring at record pace as virus spreads faster than ever in Oklahoma
0 Comments
Share this 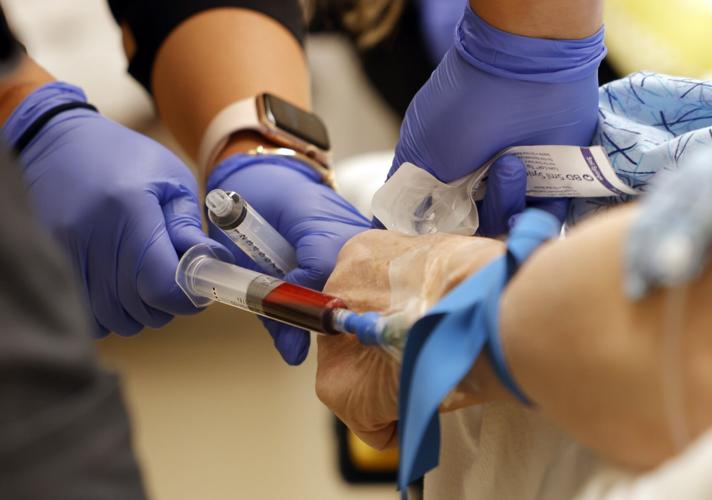 Nurses draw blood from a patient at Saint Francis in Tulsa on Wednesday, July 28, 2021.

COVID-19 hospitalizations have skyrocketed at record rates to reach levels now that Oklahoma endured in fall 2020 as the virus spreads more efficiently than ever in the state.

In only a month, COVID hospitalizations have gone from lows similar to June 2020 after quarantine to then what took four months to hit October 2020 levels — when then-president Donald Trump’s coronavirus task force advised Gov. Kevin Stitt that “many preventable deaths” were happening in Oklahoma.

On Friday, there were 720 COVID inpatients reported statewide in hospitals, a three-day average that is up 521% from 116 on June 29. This past week alone, that average climbed 39% from 519 reported Monday.

Gov. Kevin Stitt’s goal to “get our summer back” has collided with medical experts who want him to declare a state of emergency to give battered hospitals more flexibility to add capacity and avoid maxing out sooner than later.

Halstead said staffing is the largest concern because the hospital industry has lost medical professionals not just to COVID deaths but burnout, too.

She said hospitals in Grove, Miami and Tahlequah are full as the hospital community works to handle the rapid influx without the leeway offered by an emergency order from the governor.

Dr. Mary Clarke, president of the Oklahoma State Medical Association, called it “alarming” to have this much viral disease spread in the summer when the flu and other upper respiratory infections are much more prevalent in colder weather.

“It’s unfathomable that we are dealing with this disease again when we have a safe and effective vaccine to prevent it,” Clarke said, adding that medical and public health professionals are still fighting a groundswell of misinformation.

Clarke expressed sadness that hospital pediatric wards are filling up, resulting in children being taken 100 miles or 200 miles from home for treatment.

An emergency declaration from the governor would do more than allow hospitals to ramp up capacity.

Currently illegal under state law, an emergency order would provide individual school boards the option to decide whether mask mandates are appropriate to slow COVID-19’s spread this school season.

“That’s tying the hands of our local communities trying to mitigate the spread,” Clarke said. “If you can’t vaccinate your children, there’s only one way to do it: that is to socially distance, hand wash, wear a mask.

The state reported 20 hospital admissions of children ages 11 and younger who were infected with COVID the past two weeks. Another 11 were ages 12 to 17, so there were 31 total hospital patients younger than 18 in two weeks.

Reached for comment late Friday afternoon, a spokesperson for the governor said Stitt still doesn’t have plans to declare a state of emergency.

More vaccine uptake could have prevented the latest COVID wave from inundating the state, but a University of Oklahoma epidemiologist says it isn’t too late to somewhat blunt the delta variant’s exponential growth if a three-week rise in new vaccinations continues.

Dr. Aaron Wendelboe’s model indicates the virus transmission rate is at its highest yet: each infected person spreads COVID on average to 3.2 other individuals.

His model projects the virus’ exponential growth to continue and peak in late September. A stronger vaccination rate still could soften the slope’s steepness and lower the peak’s height, he said.

“That’s why it makes such a big difference to get people vaccinated.”

The worsening wave is predominantly the unvaccinated population, with Oklahoma among the worst in the nation at only 49.1% of its residents fully vaccinated.

An Oklahoma State Department of Health spokesperson on Thursday said about 81% of COVID-19 hospitalizations the past month were individuals who hadn’t been vaccinated.

In comparison to the surge throughout fall and winter, the Tulsa County hospital burden is deeper into that timeline than the state as COVID patient loads reached mid-November levels Friday.

Hospitals in Tulsa County house about 40% of the COVID-19 patients across the state, as well as nearly 50% of those who require intensive care.

The three-day average of 286 hospitalizations in Tulsa County have soared 440% from the 53 reported June 29.

The statewide and Tulsa County averages of COVID patients in ICUs were at 215 and 101, respectively, up from 30 and 17 on June 29.

In what is perhaps a reaction to the delta threat, state data show first-dose vaccinations have gone up three consecutive weeks but still remain much lower than in the spring.

“This is preventable,” said Wendelboe, the state’s former lead epidemiologist. “Whatever we can do to help people get access to (vaccine) information so that they can prevent (COVID-19) within their communities and their families, we want to be a part of that conversation if we can.”

People in need are being turned away because of staffing shortages — not lack of beds. Nurses have so many better options, care facility directors lament, as other health care providers offer sign-on bonuses and lucrative temporary contracts.

Public schools and the public health emergency are where their differences become most apparent. Both candidates made separate visits to the Tulsa World last week.

A Haleyville man is dead after a crash in Pittsburg County Friday morning, the Oklahoma Highway Patrol has reported.

Oklahoma crews are working to restore power to customers in an area east of Orlando.

In backwoods Oklahoma, Democrats look for their roots

It's been a long time since Oklahoma Democrats had fun this late in a general election campaign. But they did Saturday night at the Mike Synar Memorial Barbecue.

"The vague nature of the law has created anxiety among Oklahoma educators," reads the Osage Nation resolution. #oklaed #okleg

The Belle Star View Lodge, built in 1996, received updated rooms, and the lobby was transformed into a gathering space along with a gift shop and a front desk.

More than $95 million in ARPA projects — including at least $35.7 million for the Tulsa area — did not get a vote during Thursday's special legislative session because of a dispute over a $2.8 million allocation to the Oklahoma City YWCA.

'Oklahoma is way behind' in nurse shortage, with nursing home execs 'deeply concerned'

State data show Oklahoma lost the equivalent of nearly 40,000 eight-hour nursing shifts in one year as RN and LPN hours dropped. "We have got to step it up," says Kimberly Green of Diakonos Group.

The $5 million facility opened Monday afternoon on historic Route 66 near the Vinita exit from the Will Rogers Turnpike, where it will serve as a sort of tourist gateway to the Cherokee Nation and northeastern Oklahoma.

How the King's coronation will be different from the Queen’s

How the King's coronation will be different from the Queen’s

Residents clean up, save mementos after Ian’s damaging surge

Residents clean up, save mementos after Ian’s damaging surge

Nurses draw blood from a patient at Saint Francis in Tulsa on Wednesday, July 28, 2021.