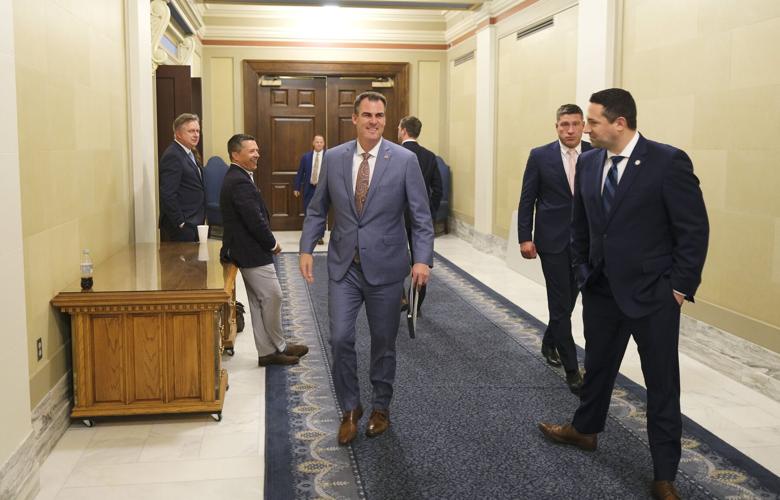 Gov. Kevin Stitt held a press conference Monday in the Blue Room at the Capitol to discuss a major economic development opportunity. 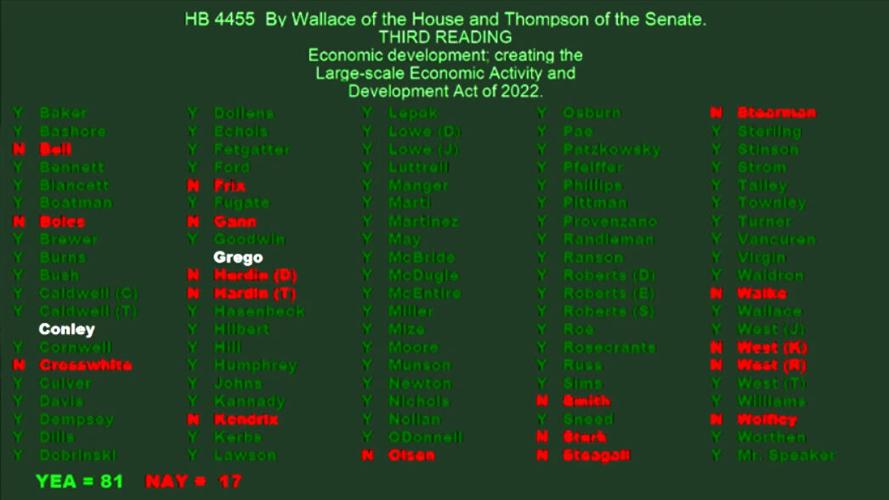 In debating a $698 million incentive package to lure a $3 billion to $5 billion electric vehicle battery factory to Pryor, no one in the Oklahoma House of Representatives on Tuesday really disputed the claim that such a project would bring arc-bending change to the community, the region and even the state.

The arguments were about whether change is good or bad, and whether the state should be involved in such things at all.

“I can’t get past the question, why are we giving ... hard-earned tax money away ... and give it to a corporation that doesn’t need it?” said Rep. Tom Gann, R-Inola, whose district includes Pryor and the Mid-America Industrial Park, where the plant would be built.

“It is immoral to give taxpayer money to a corporation that doesn’t need it or has a business model that doesn’t work.”

One of the House’s most austere conservatives, Gann said the people of the area do not want the proposed plant and neither do other MAIP tenants — a claim proponents of the project disputed.

But Gann and Stearman were among a small minority. By a vote of 81-17, the incentive program — in the form of House Bill 4455 — was sent to the Senate Tuesday morning.

Gov. Kevin Stitt hopes to have the bill by Friday.

Speaker Pro Tem Kyle Hilbert, R-Bristow, who presented the bill, said legislators had to decide whether they are really want to diversify the state’s economy or consider it "something we just talk about on the doorstep" when campaigning.

A common complaint, even among those who voted for HB 4455, is the secrecy surrounding the deal.

HB 4455, entitled the Large-scale Economic Activity and Development Act, calls for a 3.4% state rebate on qualified capital expenditures with a minimum investment of $3.06 and a maximum of $4.5 billion. The rebates also require meeting certain employment minimums and other conditions over five years.

The remaining $85 million would be available to an unnamed second, “separate establishment,” referred to as “Player 2” in explanations of the program. Player 2 would have to invest $500 million to be eligible.

The LEAD program would be limited to the initial $698 million, which would come from state reserve funds and placed in a segregated account. Anything left after 10 years would return to the general fund.

Any additions to the program would have to go through the Legislature.

Hilbert said the $698 million total is a bump of $198 million over what the two target companies would qualify for under the state’s existing 2% capital refund program.

In its final form, the incentive package differs from the request outlined by Stitt Monday afternoon, hours before HB 4455 was introduced in legislative committees.

Stitt had asked that the rebate rates for Quality Jobs — a program that reimburses 5% of payroll for qualifying jobs — and capital investment be increased.

The target businesses apparently could also qualify for Quality Jobs, which on the $250 million annual payroll mentioned over the past two days works out to as much as $12.5 million a year for 10 years.

Separately, the Legislature is also considering a phase out of the state’s corporate income tax, which, if adopted, would be another perk.

Hilbert said he understands total incentives from all sources for the project are around $1 billion.

Here are the state legislators who voted "nay" on a $698 million incentive package, pushed by Gov. Kevin Stitt.

If anything matters more in a Republican primary than loyalty to former President Donald Trump, it might be antipathy for current President Joe Biden.

Oklahoma Attorney General John O'Connor and his challenger in next month's Republican primary disagreed sharply on two things at the Rotary Club of Tulsa Wednesday.

The state got a cut only upon the restaurants clearing $5 million in profit, and $165,000+ in travel expenses were reported the one month Swadley's wasn't in the red, according to LOFT.

Grand jury criticizes Pardon and Parole Board, governor over commutations

Lawrence Anderson, denied commutation in 2019, was approved for release seven months later, when he allegedly brutally killed three people, including a small child.

Legislators put off vote a day on $9.8 billion budget bill to give themselves time to read it

"The public should absolutely know how we are spending tax dollars. It is a shame the public and most of the Legislature doesn’t know at this time,” said Sen. J.J. Dossett, D-Owasso.

Bills would provide funds for Oklahoma historical sites, including museums

The Will Rogers Memorial Museum in Claremore would be slated for $7 million in improvements.

Among areas not seeing much of an increase in the Oklahoma Legislature's budget plan is common education, which had asked for almost $100 million in additional money and would be getting about $17 million — 0.54%. #oklaed

Senate executive assistant honored for service since 1965: 'A rare breed'

Donna Garlick, 82, retiring after working for nine Oklahoma senators, is known for her coveted and overstuffed Rolodex with the names and numbers of many powerful people.

Pope Francis jokes about needing tequila for his hurt knee

Pope Francis jokes about needing tequila for his hurt knee

Gov. Kevin Stitt held a press conference Monday in the Blue Room at the Capitol to discuss a major economic development opportunity.