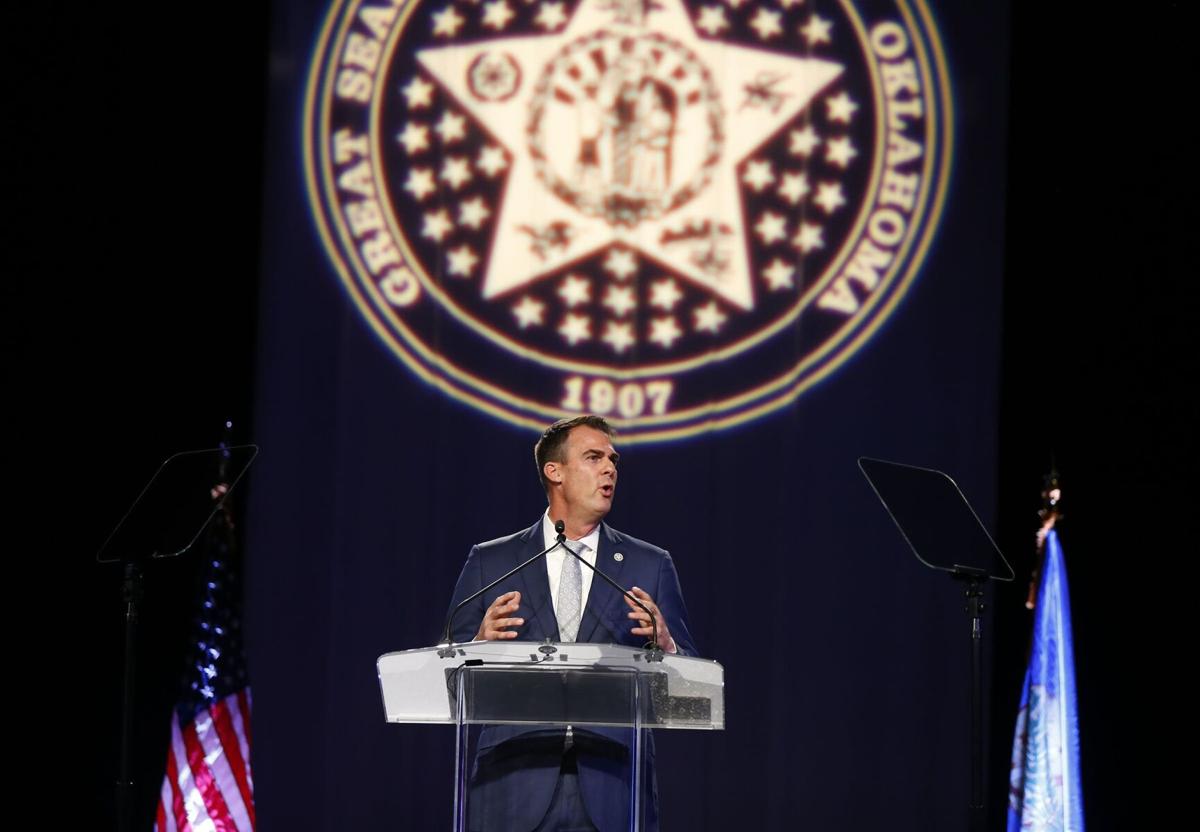 Gov. Kevin Stitt speaks at the Tulsa Regional Chamber’s State of the State luncheon on Thursday. 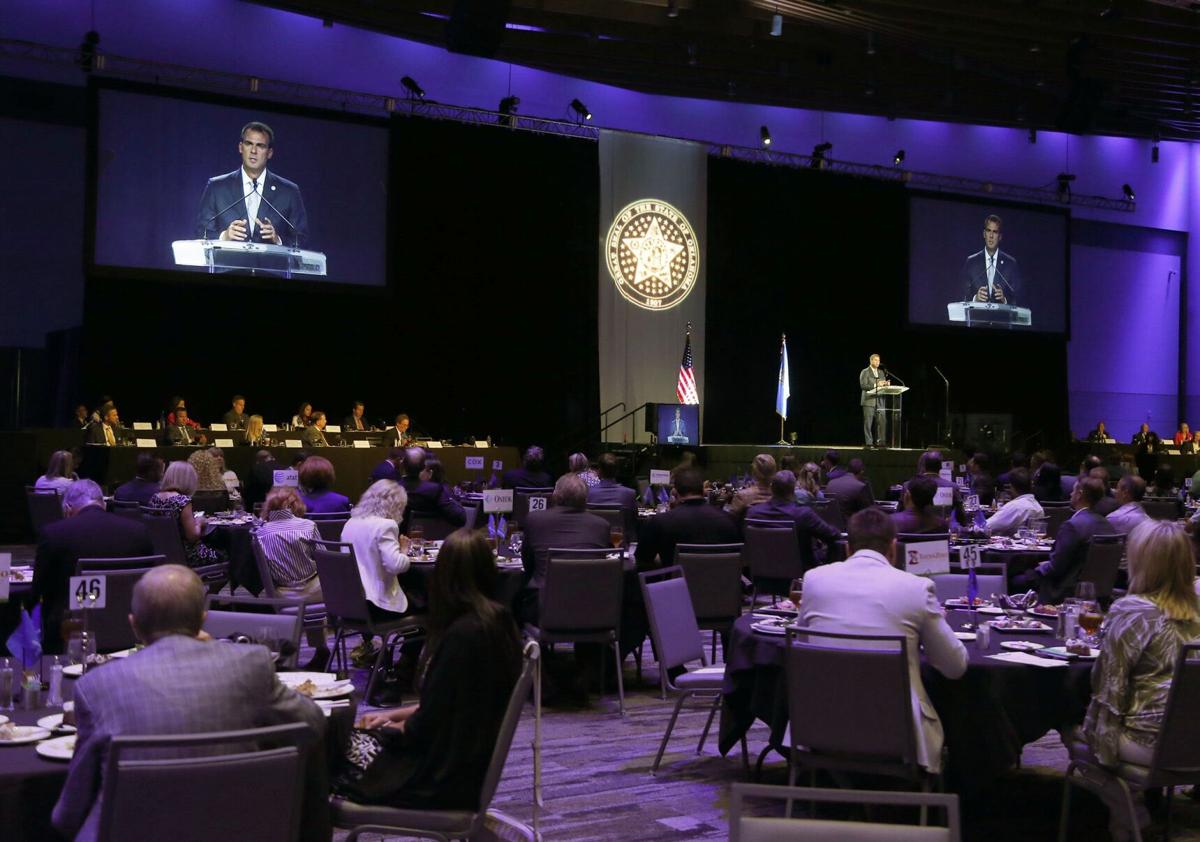 Gov. Kevin Stitt speaks at the Tulsa Regional Chamber's State of the State luncheon at the Cox Business Convention Center on Thursday. 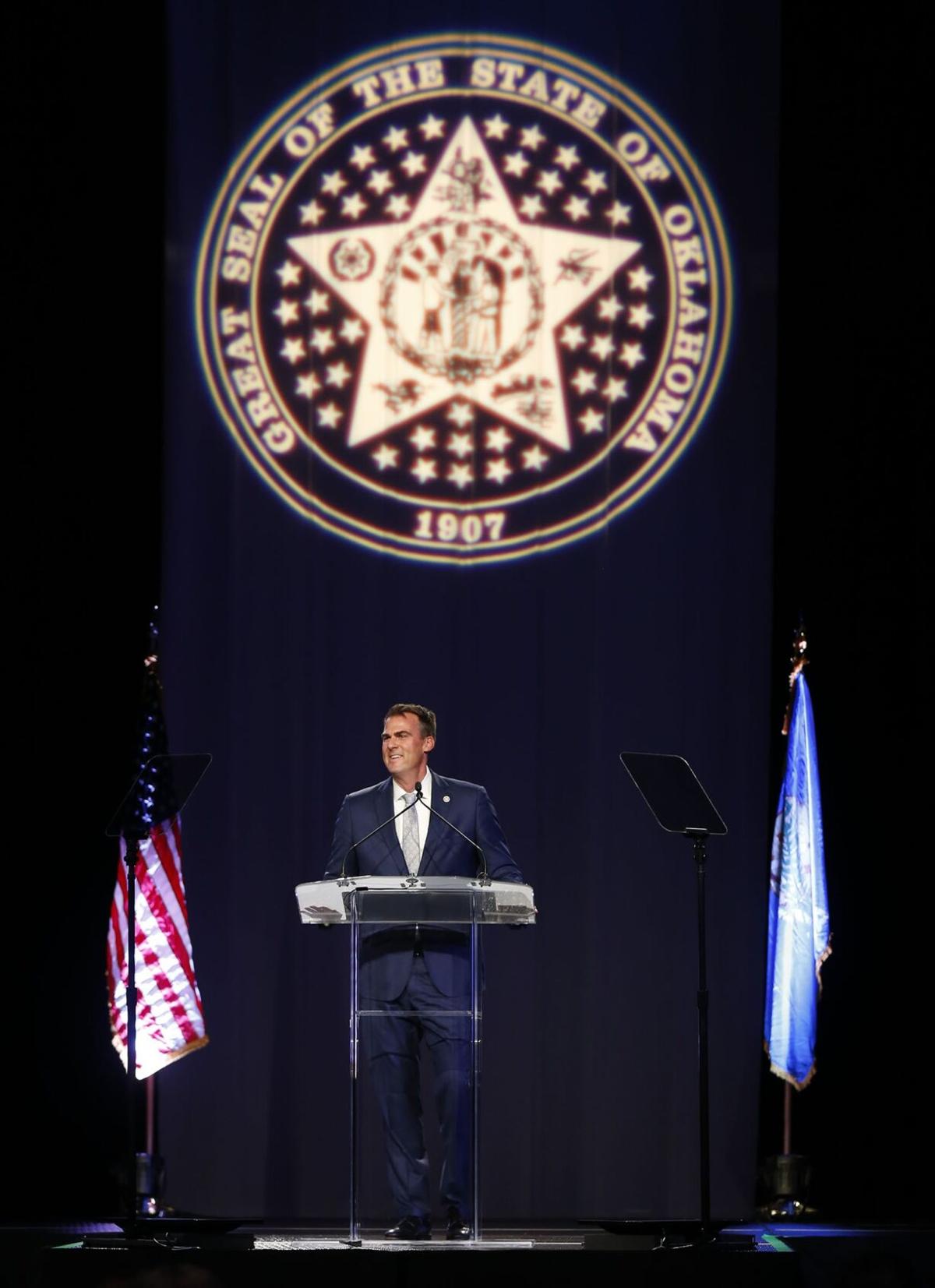 Gov. Kevin Stitt speaks at the Tulsa Regional Chamber's State of the State luncheon in Tulsa on Thursday.

Gov. Kevin Stitt again called last year’s McGirt decision Oklahoma’s “most pressing issue” on Thursday while remaining mostly silent about the resurgence of COVID-19 or the new state law that limits local efforts to control it.

Speaking to the Tulsa Regional Chamber at the Cox Business Convention Center, Stitt moved from references to the turmoil in Afghanistan to COVID-related mandates, praised the state’s budding film and electric vehicle industries, and proclaimed California Gov. Gavin Newsom “Oklahoma’s Economic Developer of the Year.”

Stitt’s remarks about the U.S. Supreme Court’s McGirt decision, which found that the Muscogee Nation’s reservation — and, by extension, some other Oklahoma tribes’ reservations — was never legally dissolved, were not new.

Delivered within the Muscogee Nation less than a mile from its intersections with the Cherokee and Osage nations, however, his words took on an added dimension.

The ruling found that major crimes involving American Indians should be prosecuted under federal rather than state law. That situation already existed in some cases in Oklahoma, but McGirt greatly expanded federal and tribal jurisdiction and opened numerous questions regarding issues ranging from taxes to misdemeanors not covered by federal law.

The tribes and the court’s majority opinion say these issues can be worked out, if not easily then at least systematically, but Stitt is emphatic that the decision must be reversed.

At Stitt’s urging, state Attorney General John O’Connor hired a national law firm to argue that the Supreme Court should reverse itself.

“What we’re seeking is the complete restoration of Oklahoma’s sovereignty,” Stitt said Thursday.

A few hours earlier, the Muscogee Nation had welcomed Stitt via Twitter and noted that Jimcy McGirt, the defendant whose appeal of a state conviction led to the landmark Supreme Court opinion, was sentenced to three life terms by a federal court on Tuesday.

“Yesterday’s sentencing … is a prime example of an orderly process that preserves public safety and delivers justice in the lawful, appropriate venue,” tweeted the Muscogees.

“The most harmful lie here, though, is the notion that the Supreme Court’s McGirt ruling ‘creates a public-safety nightmare for victims and law enforcement.’ This is false. Every crime in Oklahoma falls under local, state, federal or tribal jurisdiction. No matter where it happens in the state, criminals are arrested, prosecuted and face justice.”

“It’s disappointing to hear a governor of Oklahoma fail to understand the basic facts of the state’s relationship with tribes,” Hoskin said in a written statement. “But that is consistent with how he and his new attorney general (O’Connor) have approached McGirt: it’s never been about the facts or about supporting victims, but about undermining tribal sovereignty.”

Stitt did not directly mention COVID-19 during his remarks. He did, however, refer to his decision to lift most pandemic-related restrictions after only a few months, saying it allowed Oklahoma’s economy to function more smoothly than states’ such as California that levied longer and more stringent measures.

“We are witnessing freedom and democracy slip from Afghanistan’s fingers,” Stitt said during a brief passage on the situation in that country. He then tied that into what he said is an infringement on individual freedom in the United States.

“Is there ever a time when liberty must be sacrificed?” Stitt said. “Maybe public safety? Public health? Majority viewpoint? Today, some leaders of cities and states in America are saying yes.

“This is deeply troubling to me,” Stitt said. “Because today you may be finding yourself agreeing or not even caring about a few extra mandates, but tomorrow you might disagree. Freedom is about protecting the minority’s viewpoint.

“It’s troubling there are governors in other states who believe in sacrificing freedoms by mandating and controlling their citizens. ... As governor I’ve never sacrificed individual liberties for any price.”

Critics disagree, but in any event Stitt made his point as it pertains to COVID-19 mandates.

And he made it, as it turned out, at almost the same time Tulsa Public Schools announced a mask mandate for students and staff. Reporters tried to ask the governor about that afterward, but he left quickly without answering their questions saying, “Sorry. I have to go.”

He did, however, take a question about COVID and state hospital capacity from the Chamber.

Stitt said the state has a six-month supply of personal protective equipment and that the biggest problem seems to be medical staffing. He said steps have been taken to train more health care workers and that federal pandemic relief funds may be used to recruit them.

A Thursday conference call involving Stitt and several other governors and President Joe Biden to discuss Afghan refugees was canceled because of the bombing attacks at the airport in Afghanistan’s capital, Kabul.

Proponents hope to circulate two petitions, one of which supports legalization of recreational marijuana use.

“I don’t believe it is the government’s job to dictate polices to private companies,” Oklahoma Gov. Kevin Stitt said.

The public health crisis brought on by COVID-19 exacerbated sharp economic disparities between Native Americans and other sectors of the population.

The thousands sharing Rep. Markwayne Mullin's comments now think a federal infrastructure bill includes an "animal agriculture tax." A lobbyist group is worried that ranchers could be charged $2,600 per head of cattle.

Gov. Kevin Stitt speaks at the Tulsa Regional Chamber’s State of the State luncheon on Thursday.

Gov. Kevin Stitt speaks at the Tulsa Regional Chamber's State of the State luncheon at the Cox Business Convention Center on Thursday.

Gov. Kevin Stitt speaks at the Tulsa Regional Chamber's State of the State luncheon in Tulsa on Thursday.