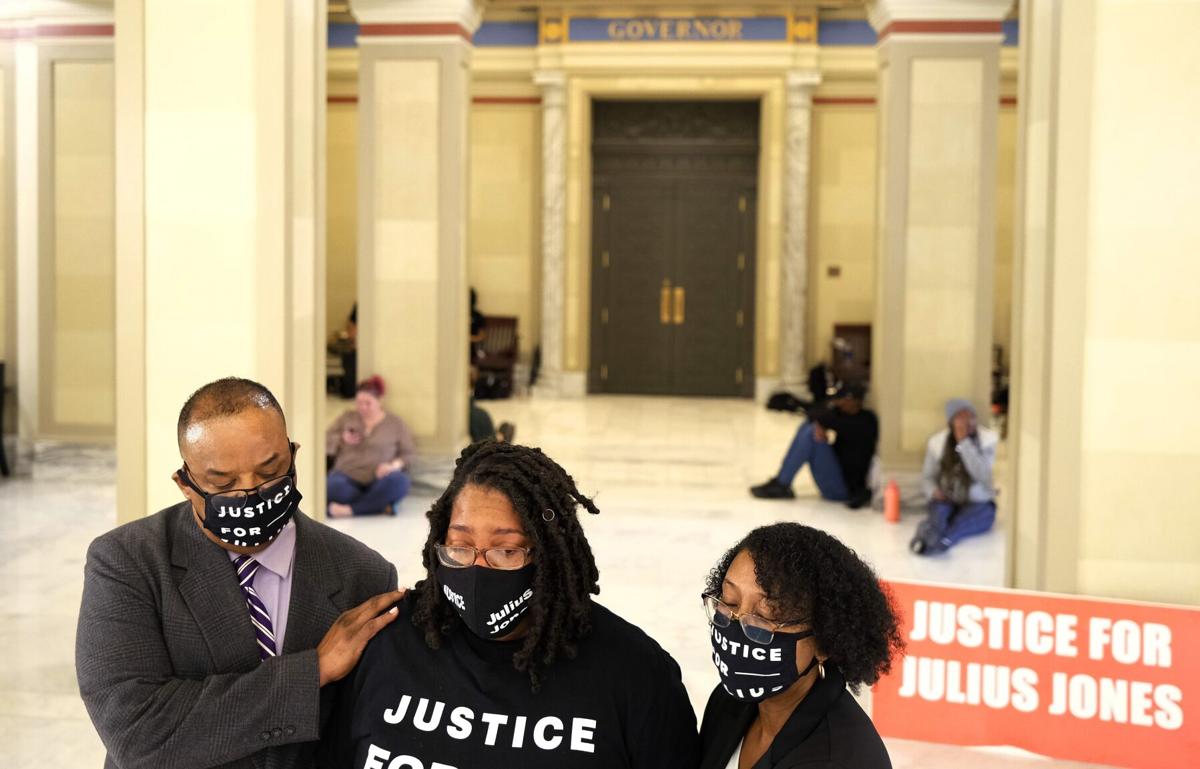 The Rev. Marcus Carruthers (left) and his wife Dionne Carruthers (right) comfort Antionette Jones as she speaks to the media Tuesday while other supporters of Julius Jones sit outside Gov. Kevin Stitt’s office at the Oklahoma Capitol. 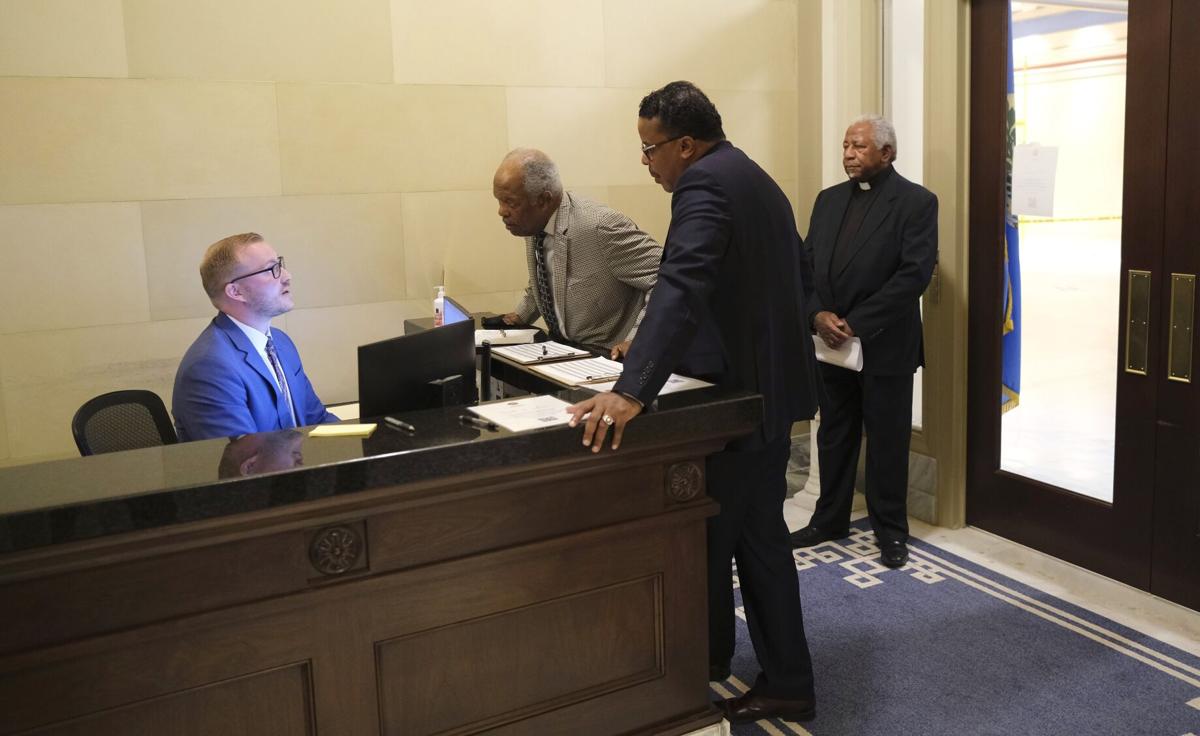 The Rev. John A. Reed (center left) and the Rev. Derrick Scooby talk with a receptionist at Gov. Kevin Stitt's office at the Oklahoma Capitol on Tuesday. 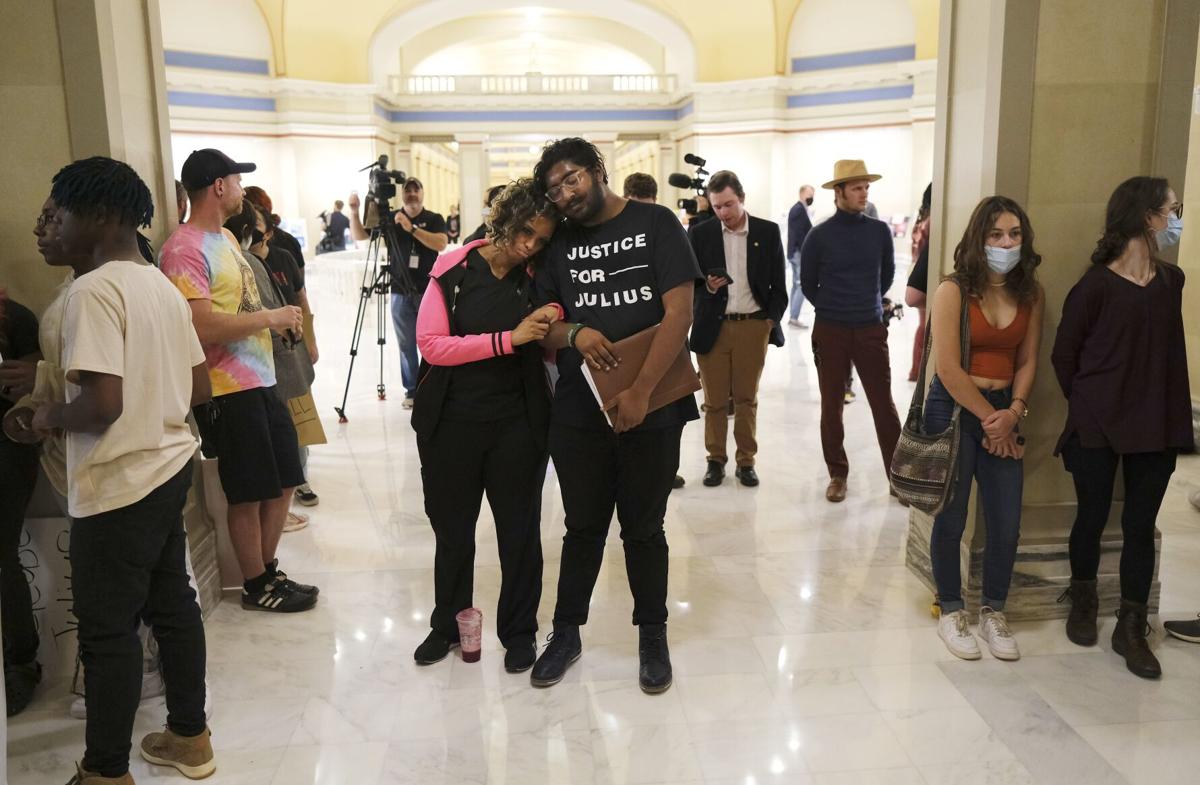 Chaunte Gilmore and Tas Al-Micahel uphold each other as supporters of Julius Jones gather outside Gov. Kevin Stitt's office at the state Capitol on Tuesday.

Barring Stitt’s intervention, Jones is set to die by lethal injection at 4 p.m. Thursday in the Oklahoma State Penitentiary in McAlester. He was convicted of the 1999 shooting death of Paul Howell of Edmond in front of Howell’s two young daughters and sister. Howell’s vehicle was stolen, and he was run over by it after being shot.

Stitt remained silent Tuesday concerning Jones’ fate. Oklahoma City police placed waist-high barriers along the north side of Northeast 23rd Street, across from the Governor’s Mansion, on Tuesday afternoon, and by Tuesday evening a few dozen protesters had gathered near the east end of the barricade.

Jones has maintained his innocence and said he was framed for the murder by a co-defendant who accepted a plea bargain in exchange for testifying against Jones.

Prosecutors and relatives of Howell’s are adamant that Jones is guilty. The murder weapon wrapped in a bandana was found in a crawl space above his room at his parents’ home.

The ammunition was found in the home’s doorbell chime. Jones’ DNA was found on the red bandana, which a witness said the killer was wearing.

Earlier this month, the Pardon and Parole Board voted 3-1 to recommend that Stitt grant clemency and commute Jones’ death sentence to life with the possibility of parole. The board had earlier recommended the commutation of Jones’ sentence. Stitt rejected that decision.

Jones has amassed a following of supporters who include celebrities and athletes. His supporters have held marches, rallies and prayer vigils. Several dozen waited quietly outside Stitt’s office most of Tuesday.

“All that’s happened has been about Julius Jones’ innocence,” Goodwin said. “Certainly the death penalty is an ongoing issue. I’m against the death penalty. But this is about executing an innocent man.”

State Rep. Monroe Nichols, D-Tulsa, said doubt about Jones’ guilt should give the governor and others pause.

“The death penalty should never be used in a case where the person may be innocent,” Nichols said. “Gov. Stitt has said he wanted to let (the appeal process) run its course. That’s happened.”

Former state Sen. Connie Johnson, an Oklahoma City Democrat who filed several bills to repeal the death penalty during her tenure and is now a candidate for governor, said the current situation is “unfortunate but an opportunity. It’s unfortunate that the governor might choose to kill Julius Jones, … but it is an opportunity for him to (commute) the execution in favor of education” about the death penalty.

Jones’s mother delivered a letter to Stitt on Monday, telling him Jones is not guilty of Howell’s murder and that “his conviction and death sentence are a terrible miscarriage of justice.”

Barbara Hoberock contributed to this story.

Where does Donald Trump stand now?

Stone said he learned about Lahmeyer from retired Gen. Michael Flynn, who also has a Trump-related (and pardoned) felony on his resume, and businessman Clay Clark, who is closely aligned with Lahmeyer's campaign.

Oklahoma delegation a loud 'no' on $1.75 trillion Build Back Better

Rep. Kevin Hern characterized it as the largest expansion of the U.S. government in history, "a giant, unprecedented leap towards socialism … leaving hardworking taxpayers to cover the bill."

Oklahoma's legislative efforts to curb opioid addiction have resulted in misery for chronic pain sufferers and may have actually increased overdose deaths from illegal substances, state lawmakers were told Monday.

Gov. Kevin Stitt has said he promised Oklahomans the state would fight efforts that could result in job losses for those who choose not to be vaccinated.

The map approved by lawmakers moves 227,138 Oklahoma County residents into a different congressional district. Democrats offered their own map, but that measure failed in committee.

State adjutant general says he was relieved of his duties by Gov. Stitt

The plan going to the governor for approval halves the number of Hispanics in CD5. Democratic lawmakers say the move is an attempt to dilute the largely Democratic Hispanic vote and help Republicans "retake the House."

The change comes immediately after a new adjutant general took over.

The Rev. Marcus Carruthers (left) and his wife Dionne Carruthers (right) comfort Antionette Jones as she speaks to the media Tuesday while other supporters of Julius Jones sit outside Gov. Kevin Stitt’s office at the Oklahoma Capitol.

The Rev. John A. Reed (center left) and the Rev. Derrick Scooby talk with a receptionist at Gov. Kevin Stitt's office at the Oklahoma Capitol on Tuesday.

Chaunte Gilmore and Tas Al-Micahel uphold each other as supporters of Julius Jones gather outside Gov. Kevin Stitt's office at the state Capitol on Tuesday.