Spanish-language signs and billboards line many streets, such as Southwest 29th Street, where the number of Hispanic-owned bakeries, restaurants, mechanic shops and other businesses have significantly increased over the past decade.

Oklahoma’s Hispanic population grew more than any other demographic group over the past 10 years, with Oklahoma City’s southwest side fueling much of the growth. The increase in population and economic activity has buoyed hopes that Hispanics, a group long under-represented in Oklahoma politics, would finally see their political capital rise.

But now the GOP-led Legislature has sent to the governor its congressional redistricting plan, which critics say mutes the group’s growing political, and largely Democratic, voice.

State Rep. Jose Cruz, D-Oklahoma City, said the proposed maps, which would move thousands of residents in the heavily Hispanic southwest side of the city from the politically competitive 5th Congressional District to the firmly Republican 3rd Congressional District, show “blatant partisanship” from Republicans, who have been in charge of the redistricting process.

“It sends a message to our constituents: ‘It doesn’t matter what you think as long as we’re in charge,’” he said.

The Hispanic population in Oklahoma saw a 42.1% increase in the past 10 years, according to the Census Bureau, increasing the percentage of Hispanics in the state from 8.9% of the state’s total population in 2010 to 11.1% now.

Under the current congressional maps, the Hispanic voting-age population is highest in the 5th District, which covers most of Oklahoma County and all of Pottawatomie and Seminole counties.

Democrat Kendra Horn broke a 21-election GOP winning streak in 2018, defeating 5th District incumbent Steve Russell with 50.7% of the vote. Stephanie Bice retook the seat for the GOP in 2020, beating Horn with 52.1% of the vote.

All six of Oklahoma’s congressional seats are held by Republicans, and the 5th District has produced the only competitive races since 2012. GOP lawmakers took steps that could strengthen their party’s grip, proposing a map that separates the dense Hispanic population in south Oklahoma City into three different districts.

Much of the southwest side now goes to District 3, represented by U.S. Rep. Frank Lucas, R-Cheyenne, a farmer and rancher whose district extends to the western borders of the state, including the Panhandle.

A portion of southeast Oklahoma City, including Del City and areas around Tinker Air Force Base, moves to the 4th District, represented by U.S. Rep. Tom Cole, R-Norman.

The area north of Interstate 40 and wrapping around Tinker Air Force Base remains in the 5th District.

State House Rep. Ryan Martinez, R-Edmond, who chairs the Legislature’s joint Select Committee on Redistricting, refuted suggestions that lawmakers unfairly carved out the Hispanic population to make their map work. Asked what Hispanic representation is going to look like in Oklahoma over the next decade during a press conference this month, Martinez said, “We don’t take race into account.”

But the map cuts the number of Hispanics in District 5 in half — from 153,173 to 78,218. Democratic lawmakers say the move is an attempt to dilute the largely Democratic Hispanic vote in the area and solidify Republican congressional incumbents.

“The group that benefits the most from these new lines is the GOP,” said Rep. Forrest Bennett, D-Oklahoma City, who represents State House District 92, an area that extends from the city’s downtown core to the south side. “I don’t know how else to say it. At the national level, they are trying to make sure that they position themselves as best they can to retake the House.”

Texas County saw a 25% increase in its Hispanic population since 2010, making just over half of the population in the county Hispanic. The growth can largely be attributed to the establishment of Seaboard Foods, the nation’s fourth largest pork processor, in the 1990s. Seaboard created the opportunity for Latinos to settle and start families in the area.

Javier Hernandez, an immigration attorney based in Oklahoma City, said voting-age Hispanics in the state can vary in their participation in elections and the political process. Some are politicians, engaged business owners and activists, he said. Others “don’t know or don’t care for politics.”

“South Oklahoma City is home to hard-working people,” he said. “People working blue collar jobs. They work two to three jobs. They make less, so they have to work more to provide for their families.

“Even for English-speaking voters, figuring out what the ballot means, who the candidates are, what the state questions mean, that’s hard work.”

After feeling left out for decades, Cruz said south Oklahoma City residents and members of the Hispanic community have been appointed to city and state boards and commissions in recent years, allowing them to see themselves in municipal government.

“People are finally starting to feel like they can share their concerns with their elected officials, knowing that they will be taken seriously,” he said. “Progress has been made to bring our city together.

“These congressional maps, however, tear us apart. The people that drew these maps behind closed doors looked at Oklahoma City and asked, ‘What community lacks the political power and acumen to oppose such an egregious move?’ And they chose mine.”

About the special session

Concerns about moving to the 2nd District

Oklahoma Watch: How the incarcerated skew political representation while being unable to vote

This story has been edited for length.

A newly formed group called Conservative Voice of America, with no information about its funders, recently purchased ads on the Fox News Channel going after the Republican governor as soft on crime.

In the hopper: elections and voter registration, personal freedom (yes when it comes to guns, no on being nonbinary) and at least one contentious data privacy bill.

A Baptist minister with a high priority on banning legal abortion since entering public office more than a dozen years ago, Lankford has spoken on the Senate floor and at Senate press conference, made the rounds of conservative-oriented news programs and gotten an opinion piece published on the Fox News web site.

A newly formed group called Conservative Voice of America, with no information about its funders, recently purchased three weeks of airtime to run ads on the Fox News Channel going after the Republican as "soft on crime."

Gov. Kevin Stitt has said he promised Oklahomans the state would fight efforts that could result in job losses for those who choose not to be vaccinated.

Seven states' attorneys general have asked an Ohio appeals court to stay an OSHA rule requiring COVID-19 vaccination of all employees in workplaces of 100 or more.

State adjutant general says he was relieved of his duties by Gov. Stitt

The change comes immediately after a new adjutant general took over. 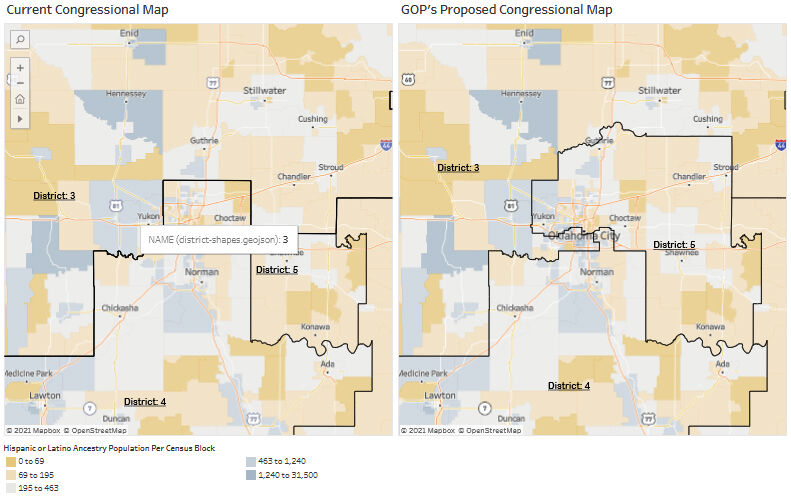 The proposed map halves the number of Hispanics in CD5. Democratic lawmakers say the move is an attempt to dilute the largely Democratic Hispanic vote in the area and help Republicans "retake the House."