House to send Trump impeachment article to Senate on Monday 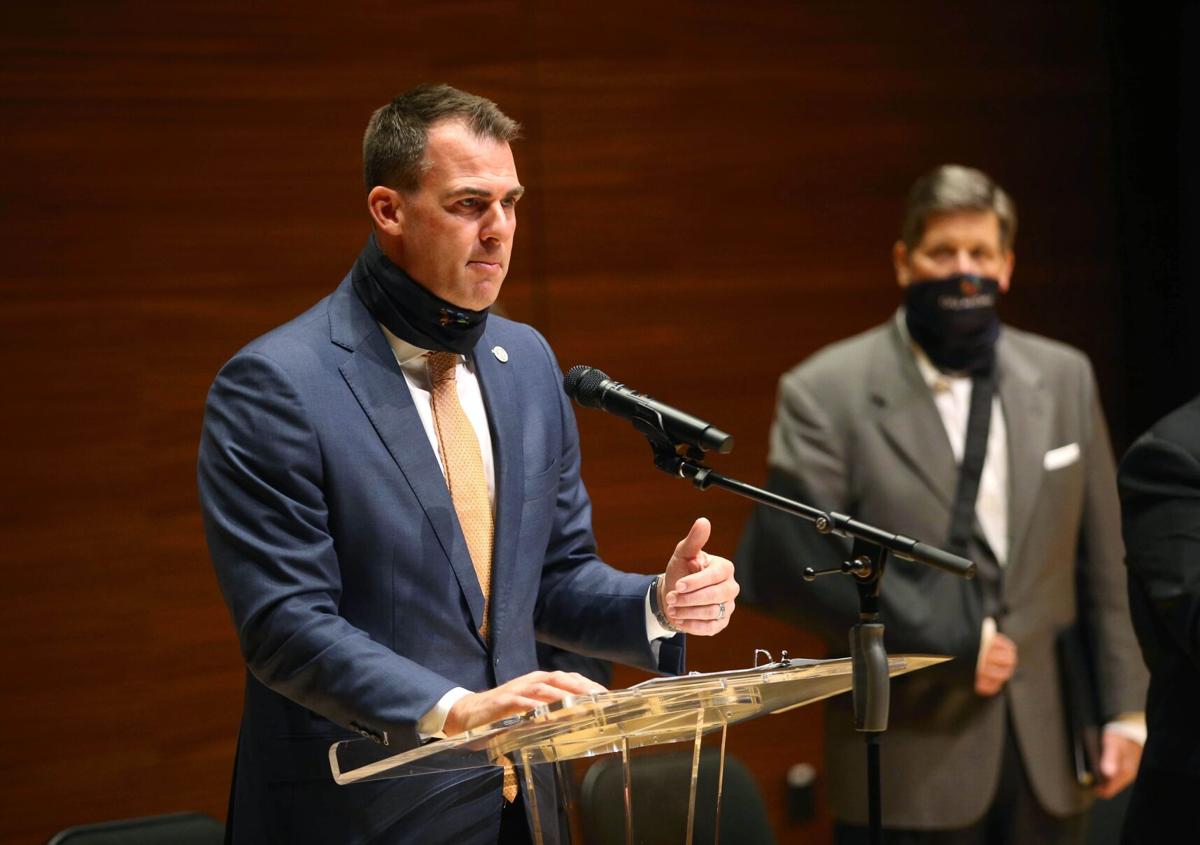 Gov. Kevin Stitt keeps his mask around his neck as he speaks during a COVID-19 briefing in Stillwater on Sept. 1.

More than three dozen states have a mask mandate, but in a seven-state region that includes Oklahoma, Gov. Kevin Stitt and Missouri’s governor are the last holdouts.

Stitt isn’t anti-mask; he’s recommended mask wearing, along with social distancing and washing hands, in his public health messages since the summer. Stitt said the decision to require masks should be left to local leaders and that a statewide mandate would be hard to enforce.

Eight months into the pandemic, masks remain a flashpoint. That’s flummoxed public health officials, who never thought a relatively minor inconvenience to inhibit the spread of an airborne virus would become a political talking point.

Elected leaders in some cities continue to grapple with the right balance of promoting a key public health message without alienating a minority of residents who downplay the virus.

Stitt rarely wore a mask at events in April and May, when the state was focused on its reopening plans after a brief shutdown. And at an indoor rally in Tulsa for President Donald Trump in June, a maskless Stitt sat on stage with other elected officials, most of whom also were not wearing masks.

More recently, Stitt appears with a mask at events but removes it to speak.

Medical and public health leaders, including the Oklahoma State Medical Association, have consistently called for mask mandates. A statewide mask mandate would give political cover to local officials who want people in their communities to wear masks but lack the political will or the votes to get it done.

Some Oklahomans object to what they think is fear-mongering by mask-mandate advocates. The latest virus surge is happening in states with and without statewide mask mandates. Stitt appears weary of responding to questions about a statewide mandate at every briefing.

“Oklahoma has been fully reopened for six months,” Stitt said Nov. 19. “We’re seeing our cases go up and not as fast as some of these shutdown states. It’s a virus. If I could wave my magic wand to make it totally disappear in Oklahoma, I would do it.

“But again, I don’t think it’s about magic words.”

Stitt did take a step toward a mask mandate when he announced Nov. 16 that all employees of executive agencies should wear masks in state office buildings. Those requirements on 33,000 state employees came as part of a package of statewide restrictions on bar and restaurant hours and social distancing requirements for indoor dining.

“The argument has been made, ‘Well, you know we really want to encourage people and support personal responsibility.’ My response to that is: Every law we have would be fine if people were personally responsible. But at this point, we’ve reached a point where we need action,” Bynum said in a Nov. 12 appearance on MSNBC.

A mask mandate in Muskogee passed on Monday after failing in five previous attempts. In Broken Arrow, the state’s fourth-largest city with more than 110,000 people, city councilors on Monday voted down even a recommendation to wear masks.

Oklahoma City Mayor David Holt said he’s not been shy about the need for mask mandates.

“How I feel about mask requirements should be obvious by the fact that I lead a city that has one and I was very supportive of it. So I am a champion for them,” Holt said Nov. 19. “They clearly reduce the transmission. I am not the governor of Oklahoma. I can’t make it happen for anyone but the people of my city.”

Even in cities with mask mandates, compliance remains an issue. It’s largely been left to private business to enforce, and social media have been rife with examples of residents in mask-mandate cities flouting the rules.

Epidemiologists at the Oklahoma State Department of Health have published statistics showing that the virus appears to spread less in cities whose residents are wearing masks than in cities with no mask mandates or ordinances.

Meanwhile, a recent snapshot of insurance claims and hospitalization data collected by the MyHealth Access Network showed about two-thirds of COVID-19 hospitalizations came from nonmasking cities, compared to one-third of admissions from masking cities.

Beyond the science, a mask is the most visual sign that a person is taking the spread of the virus seriously.

But shame is rarely a successful pitch in public health messaging. Stitt himself said in July he doesn’t want to be a “mask shamer.” That was just days before he announced that he tested positive for the coronavirus, becoming the first governor in the country to be infected.

With hospitalizations and cases both rising rapidly this month, the Stitt administration pushed doctors to the forefront of its mask messaging effort. Doctors, infectious disease specialists and chief medical officers from central Oklahoma hospitals earlier this month implored residents to wear masks.

“Wearing a mask is not a sign of weakness or fear,” said Dr. Julie Watson, chief medical officer for Integris Health. “It’s not a political statement. It’s an outward symbol that says, ‘I am contributing. I am willing to do what it takes to help.’

“And it’s also not about a mandate. (Neither) the governor nor the government should have to tell us to do the right thing. We know better now, so we need to do better.”

Leaders at the Oklahoma State Department of Health have consistently said any mask mandate should be up to the governor. Despite being asked on several occasions, Interim Health Commissioner Dr. Lance Frye and State Epidemiologist Jared Taylor haven’t publicly acknowledged that they recommended that Stitt issue a statewide mask order.

“We’ve had some information presented to us that looked at several different mitigation factors, and mask mandates was one that made the least difference,” Frye said Nov. 9. “I’m not saying masks don’t work. It was the mandate; it wasn’t the wearing. Compliance is what we need, and that’s what works in the state.”

In a nod to government skepticism dating back to statehood, Frye said some Oklahomans have a strong anti-government impulse.

“Do we have independent people in the state of Oklahoma that believe in their freedom so much that they’ll do the opposite you tell them to do? My answer is absolutely; we do have those people in Oklahoma.”

Holt, who pointed to earlier polls showing large majorities of Oklahomans favor mask mandates, said the mask conversation has been driven by a small but vocal minority.

“The vast majority of our residents support these requirements,” Holt said. “I think what happens is we get fatigued. I may not be speaking to the 20% of residents who don’t want to do anything for COVID-19, but we don’t really need them to get these numbers down. We need that group in the middle that did take precautions at an earlier time.

“I think we need a unified voice across all levels of government and across the community.”

Quarantine or isolation: What's the difference?

When should you start and end quarantine?

Do you need to restart your quarantine if another member of your household gets sick with COVID-19?

What if you live with someone who has COVID-19 and cannot avoid continued close contact with them during their illness?

How do you isolate?

When you can be around others after you had or likely had COVID-19?

Trump is still popular in Oklahoma, but his legacy here is harder to pinpoint. Such is often the case for presidents, but assessing Trump's administration is further complicated by his unorthodox style and a pandemic now more than a year long.

Phase 2 is open for health care providers, first responders and those 65 and older. Those with underlying health conditions younger than 65 are also in Phase 2, but Deputy OSDH Commissioner Keith Reed said older Oklahomans are already having issues signing up and the state doesn't want "an even bigger group competing with them to get appointments."

Oklahoma may not see influx of coronavirus vaccines after federal fiasco

The state's COVID-19 vaccine coordinator feels as though the rug was pulled out from under him after he learned that the federal government does not have a stockpile of second vaccine doses waiting in reserve, he said Friday.

The president of Oklahoma Hospital Association said Stitt’s assessment would be a source of disagreement. “Our hospitals ... would not characterize it that way,” Patti Davis said. “It’s hectic, it’s busy, and it’s challenging.”

Justice Tom Colbert will retire effective Feb. 1. He was the first Black jurist to serve on Oklahoma's nine-member high court, as well as the first to serve as chief justice.

“Providing the Cherokee people with hunting and fishing reserves is another way we can practice tradition as good stewards of our land,” Principal Chief Chuck Hoskin Jr. said.

'This was really a riot,' Inhofe says, watching his Capitol desk invaded during breach

“They broke in on the House side," the senator said, worried enough to break away from a group being shepherded for safety because his daughter was visiting: “I didn’t want to leave her alone.”

Tulsa World editorial: American democracy is under attack; Wednesday's despicable assault on our republic is unspeakably wrong and must be stopped

For the most part, the five said impeaching Trump a week before his term ends is pointless and would further divide the country a week after rioters aligned with Trump invaded the Capitol.

Gov. Kevin Stitt keeps his mask around his neck as he speaks during a COVID-19 briefing in Stillwater on Sept. 1.