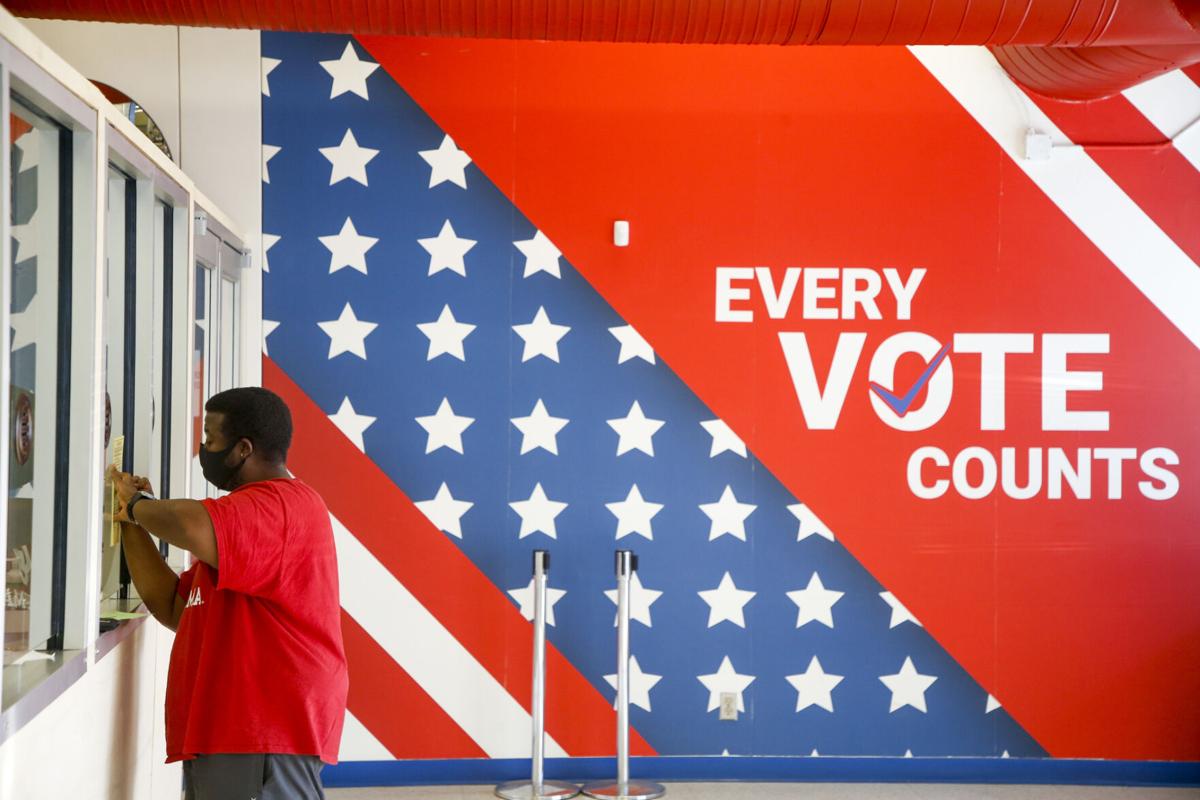 Leroy Staples of Broken Arrow signs his absentee ballot before turning it in at the Tulsa County Election Board before the Nov. 3 election. Oklahoma legislators could consider bills to expand or restrict ballot access before the 2022 general election.

Earlier this year, Oklahoma became one of the few Republican-led states to expand, rather than restrict voting access.

In a move that will cost the state $40,000 per election, lawmakers passed House Bill 2663 with bipartisan support, adding an extra early-voting day for general elections.

The new law comes as Texas, Georgia, Iowa, Arkansas and several other states responded to unfounded and refuted claims about the 2020 presidential election by enacting laws making it harder to vote.

With the 2022 general election 13 months away, will Oklahoma continue looking for ways to make it easier, or more convenient, to vote? Or will it join other Republican-led states that have looked to restrict how or when voters can cast their ballot?

Lawmakers dove into the topic during two days of interim studies last week that probed whether Oklahoma needs more safeguards or changes to the voting process.

Here is a look at what could be in store.

A trio of Democrats — Rep. Andy Fugate, D-Del City, Rep. John Waldron, D-Tulsa, and Sen. Joanna Dossett, D-Tulsa — sponsored one of the interim studies that looked at whether too many absentee ballots are being thrown out.

“More than 5,000 absentee ballots were rejected in 2020 because of simple mistakes,” Fugate said. “One in four Oklahomans voted absentee last year. They deserve the same protections and privileges as those who cast a traditional ballot on election day.”

Oklahoma offers no-excuse absentee voting by two methods: either a mailed ballot that is required to be notarized or in-person voting on the Saturday, Friday, Thursday and, thanks to HB2663, Wednesday directly before a general election.

Largely due to the COVID-19 pandemic, mailed absentee ballots were significantly more popular last year. In 2020, 275,017 mailed ballots were cast, nearly tripling the 98,381 votes mailed in 2016.

Oklahoma Election Board Secretary Paul Ziriax said 1.8% of returned ballots (5,089 in total), however, were rejected.

But Oklahoma, unlike at least 18 other states, does not have a so-called “curing” process that would notify voters that their ballot was rejected and allow them to fix their errors so it can be counted.

Ziriax said there would be a few challenges to implement this. In addition to finding a way to quickly notify the voters, he said election workers would need to figure out how to certify elections before the state’s deadlines. He said this would also likely increase costs and staff time for county election workers.

But Ziriax said a bill that Fugate unsuccessfully tried to pass this year might be a good “middle ground.” This proposal, House Bill 1843, would allow voters to cast a provisional ballot if they have received notification their original mailed absentee ballot was rejected before or on Election Day.

“If you were looking at maintaining our current timelines while offering a second chance like that, I think Rep. Fugate’s bill would be a good way to do that,” he said.

HB1843 was voted out of committee on a 6-2 vote with some bipartisan support this year. But it was never heard on the House floor. A similar bill in the Senate, Senate Bill 756 from Sen. Mary Boren, D-Norman, also did not pass this year.

Fugate said he plans to run the bill again next year.

It has been a challenge to get almost any type of Oklahoma voting bill passed.

A 2017 Oklahoma Watch review found that most election-related bills failed to get a committee hearing. That trend continued with most voting-access bills introduced for this year’s session.

Lawmakers said it is too early to tell what bill will be heard next year and whether election-related bills will be a priority.

But bill filings from the previous session offer some hints of what could be heard. That’s because bills not heard in committee last year are eligible for consideration. Lawmakers could also introduce new proposals when the bill filing period begins in earnest late this year.

Among the election-related bills introduced (but not passed) last year are:

Require a second polling place for in-person voting in counties with 25,000 or more registered voters or counties with an area of over 1,500 square miles. HB1946 (Rep. Cyndi Munson, D-Oklahoma City)

Allow a voter to attach a photocopy of their driver license or passport instead of needing a signature notarized by a notary public or having his or her signature witnessed by 2 witnesses. SB579 and SB655 (Sen. Mary Boren, D-Norman and Sen. Kay Floyd, D-Oklahoma City)

Extend the time period for early voting to include each weekday Monday through Friday that immediately precedes the weekend before any election. SB440 (Sen. Adam Pugh, R-Edmond)

Allow a county election board to change a voter’s registered address to match the address the voter indicated on his or her driver license. SB416 (Sen. Roger Thompson, R-Okemah)

Allow incapacitated voters or someone authorized to complete their ballot to hand deliver a ballot. SB1000 (Sen. Blake Stephens, R-Tahlequah)

What other states are doing

Amanda Zoch, project manager for elections and redistricting with the non-partisan National Conference of State Legislatures, said legislatures across the country last year introduced 3,400 election bills — a record since they’ve been tracking the filings.

Only 267 were passed into law.

“There is a lot of interest in elections,” Zoch testified last week. “But that is not necessarily translating to more enactments.”

The bill garnerin the most national attention has been Texas’ SB1, signed into law earlier this month. According to theTexas Tribune, changes include a ban on drive-thru voting, a ban on 24/7 hour voting, new ID requirements, monthly citizenship checks and poll watching protections.

Fugate said he believes one of the reasons Oklahoma didn’t join the states that clamped down on voting access this year is because Oklahoma never had several of the options these states previously allowed. Oklahoma, for example, does not allow drive-thru voting, 24/7 voting or drop boxes where voters can leave their ballots.

And even with the expansion of early voting days, Oklahoma lags behind many other states in time allotted for in-person voting.

“We have among the most restrictive voting laws in the United States already,” Fugate said. “So how much tighter can you really make them?”

Unlike many states that passed voting restrictions, Oklahoma doesn’t figure to be a significant player in the more highly charged presidential election anytime soon.

And its lawmakers on either side of the aisle haven’t engaged in the kind of questioning of the electoral process witnessed in other states.

Rep. Denise Crosswhite Hader, R-Piedmont, who sponsored interim studies last week on other election-related issues, said she wants to see if Oklahoma can improve the process.

“We are not trying to overthink anything that has happened, or may happen or will happen,” she said. “We have a great system in Oklahoma, but it can always be a little better.

Still, the repeatedly debunked allegations that any widespread fraud occurred during the 2020 presidential election have trickled down to Oklahoma.

In July, Rep. Sean Roberts, R-Homily, called for a forensic and independent audit of the 2020 general election results in Oklahoma County and two other random counties.

“Oklahomans have the right to know their election results can be trusted,” Roberts said.

Ziriax, who holds a non-partisan position as Oklahoma’s top election officer, responded that the audit isn’t needed and not allowed under state law.

“In my judgment the time and expense of a post-election audit is not justified for an election that was conducted more than eight months ago,” Ziriax wrote in a letter to Roberts. “Because of the strong protections our state has in place for the security and integrity of elections, there is no credible suspicion or evidence of pervasive fraud here.

Leroy Staples of Broken Arrow signs his absentee ballot before turning it in at the Tulsa County Election Board before the Nov. 3 election. Oklahoma legislators could consider bills to expand or restrict ballot access before the 2022 general election.