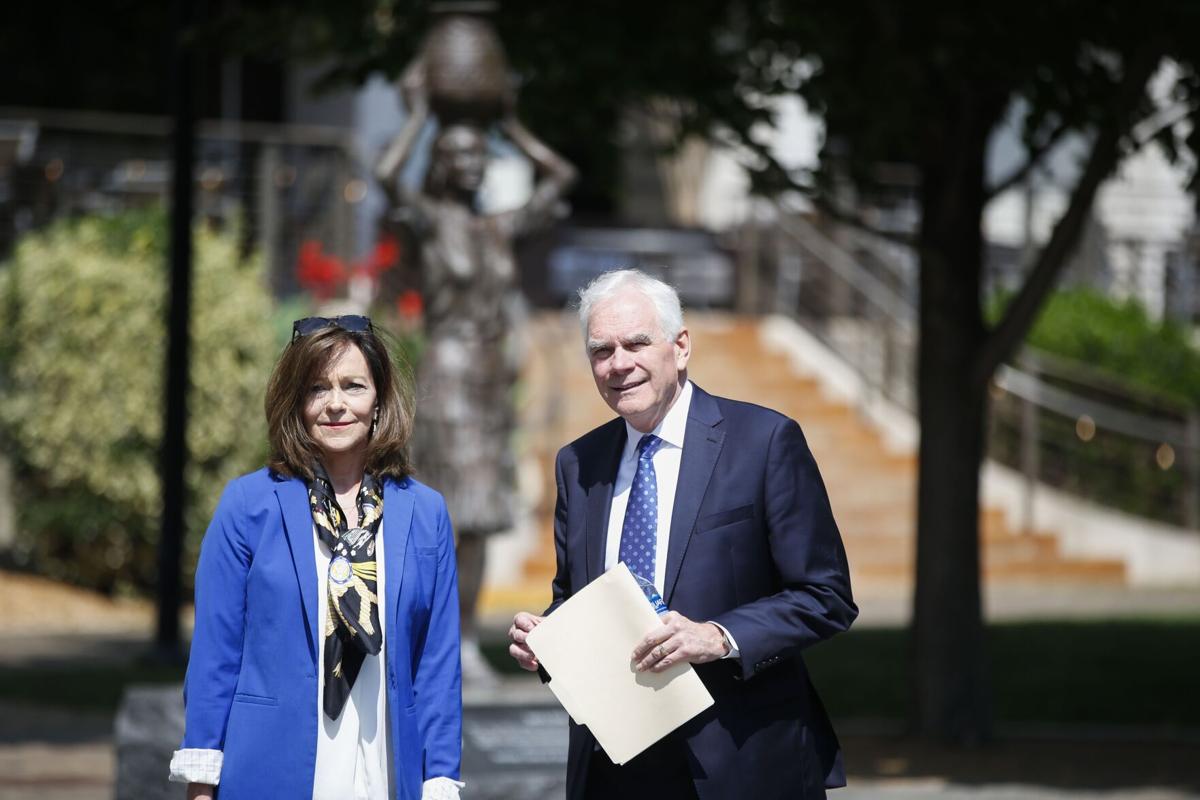 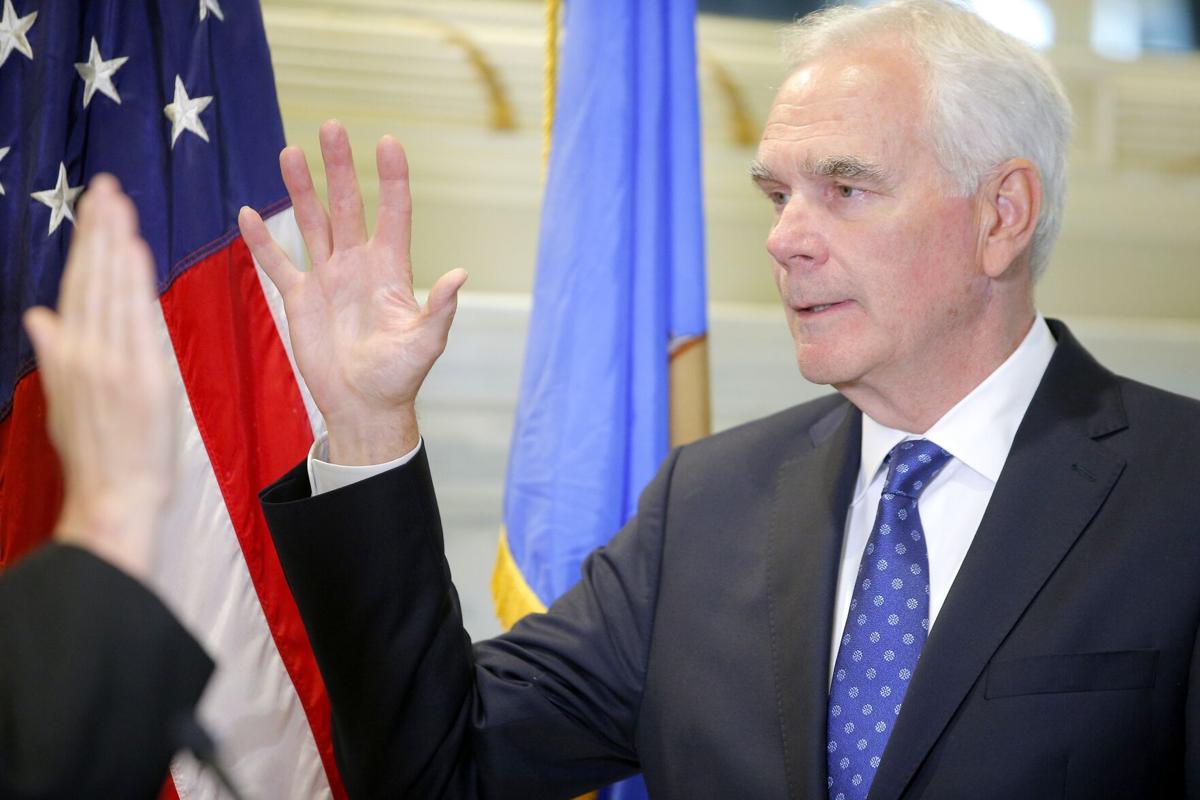 John O’Connor is sworn in as Oklahoma’s new attorney general at the state Capitol in July.

O’Connor discussed the race and other topics during an interview with the Tulsa World on Tuesday. He said he plans to run for the office during the next election.

Hunter defeated Drummond, a Tulsa attorney, by only 271 votes in the 2018 Republican primary runoff.

Drummond has announced his intention to run for the office again and has already raised more than $540,000, but still has a nearly $2.4 million campaign loan to himself from his prior campaign.

O’Connor said he knows Drummond and likes him.

“There is no question that Mr. Drummond is very rich and owns a lot of businesses,” O’Connor said. “But dollar bills don’t vote. People do.”

O’Connor said he has years of experience raising money for campaigns and causes ranging from Catholic Charities to the Tulsa Ronald McDonald House to higher education. He has hosted fundraisers for Hunter, Lt. Gov. Matt Pinnell and former Insurance Commissioner John Doak, among others.

When O’Connor was tapped by then President Donald Trump for the federal bench, the American Bar Association said he was not qualified.

O’Connor, who ultimately didn’t get the judicial post, said American Bar Association lawyers who don’t know him gave him a negative rating, while all kinds of lawyers and judges supported him. He called the ABA’s opinion “unfounded and nonsensical.”

He is not a member of the American Bar Association.

“I am proud of my legal career” and service to the community, O’Connor said.

He said he is aware that the issue could come up in his upcoming campaign.

Drummond said he has “no intention of saying anything negative against Mr. O’Connor during this race,” adding that he went negative in the race against Hunter only after Hunter went negative.

Drummond, who announced his intention to run again just days after Hunter resigned, said that in the last race, he carried 55 counties and lost to a career politician with remarkable support inside government.

Drummond said he is willing to put more money into his campaign if it is needed, but he said he thinks it will be unlikely given his fundraising so for.

O’Connor is a Catholic who is pro-life but supports the death penalty for “the most heinous crimes.”

“I see huge differences,” O’Connor said. “First of all, I think that the death penalty should be very rare and it should be for those who commit the most heinous crimes.

“I think that is a major difference between being in favor of the right to life of the unborn child compared to an individual who is not innocent, like the child is, and who has been afforded due process, the right to counsel, had a jury trial and has been convicted by a jury upon the presentation of the evidence.”

He anticipates that the state will resume executions sometime soon.

Executions were put on hold in Oklahoma a few years ago following a widely publicized botched execution and legal wrangling over the chemicals and process used in lethal injection.

O’Connor has asked the U.S. Supreme Court to overturn or narrow the scope of the landmark 2020 ruling in McGirt v. Oklahoma. That case and subsequent state appeals court rulings held that certain Oklahoma tribes’ reservations were never disestablished.

Therefore, the state did not have jurisdiction to prosecute major crimes involving Native Americans in a large portion of eastern Oklahoma, including Tulsa.

O’Connor said law enforcement and federal and state prosecutors have been thrown into chaos as a result of the decision.

“My hope is we can have constructive conversations and we can work out our problems” without having to rely on judges in Washington, D.C.

O’Connor said he supported Stitt’s efforts to get gaming exclusivity fees from the state’s tribes “in line with the market.” Stitt was not successful in renegotiating what the tribes pay the state in exchange for the exclusive right to operate Class III games here.

Tribes wound up successfully suing Stitt and getting a federal court to rule that the compacts had automatically renewed.

O’Connor said with regard to the gaming issues, “everybody got off on the wrong foot.”

“I think we will be able to work out those relationships,” he said.

Married: To Lucia Miller for 43 years with four children and 10 grandchildren

A beauty salon becomes a refuge for women in Kabul

A beauty salon becomes a refuge for women in Kabul

“I don’t believe it is the government’s job to dictate polices to private companies,” Oklahoma Gov. Kevin Stitt said.

The public health crisis brought on by COVID-19 exacerbated sharp economic disparities between Native Americans and other sectors of the population.

“In the words of our greatest president, Abraham Lincoln, Colin Powell spoke to ‘the better angels of our nature,’" said Cole. "His calm voice in these turbulent times will be greatly missed.”

Numbers: Polling from late September and early October indicates that Oklahomans were more concerned about COVID-19 and correspondingly less h…

The thousands sharing Rep. Markwayne Mullin's comments now think a federal infrastructure bill includes an "animal agriculture tax." A lobbyist group is worried that ranchers could be charged $2,600 per head of cattle.

John O’Connor is sworn in as Oklahoma’s new attorney general at the state Capitol in July.