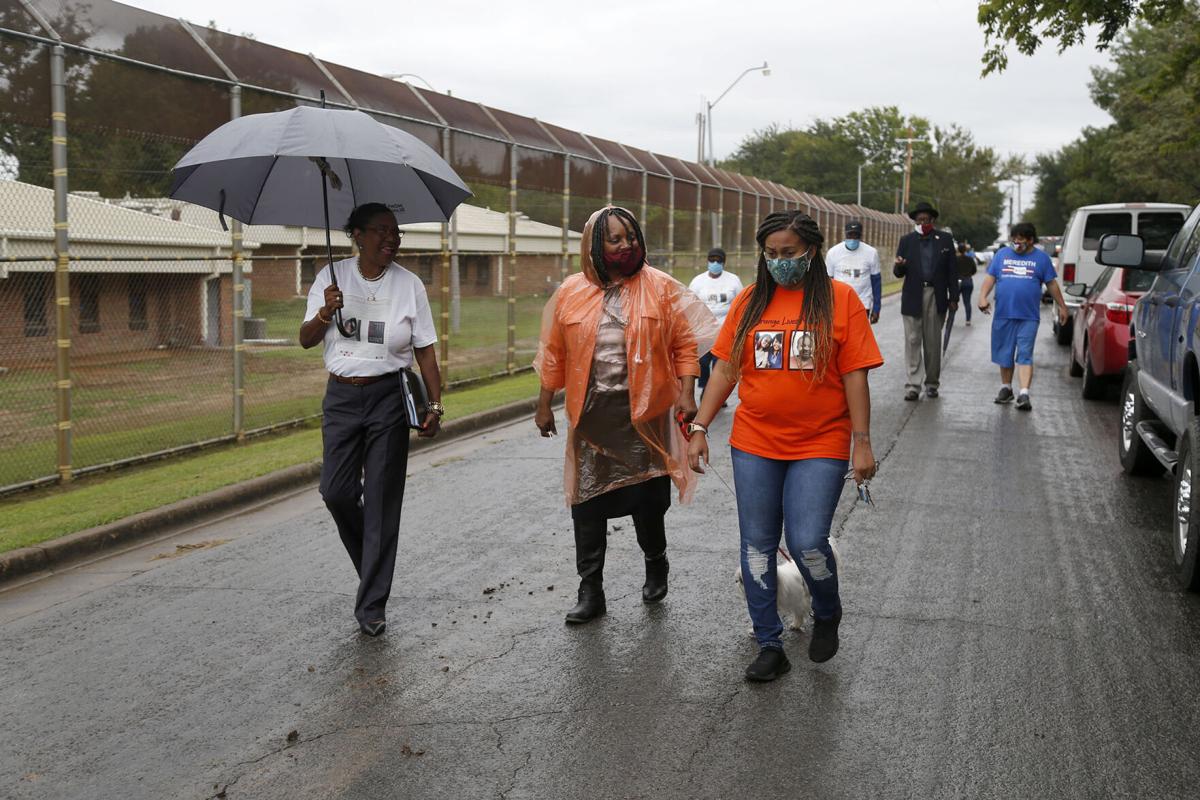 Pamela Smith (left), former state Sen. Connie Johnson and Pamela Brown, who has a daughter at Eddie Warrior Correctional Center, walk the fence line during an Orange Lives Matter protest outside the women's prison in Taft on Friday. 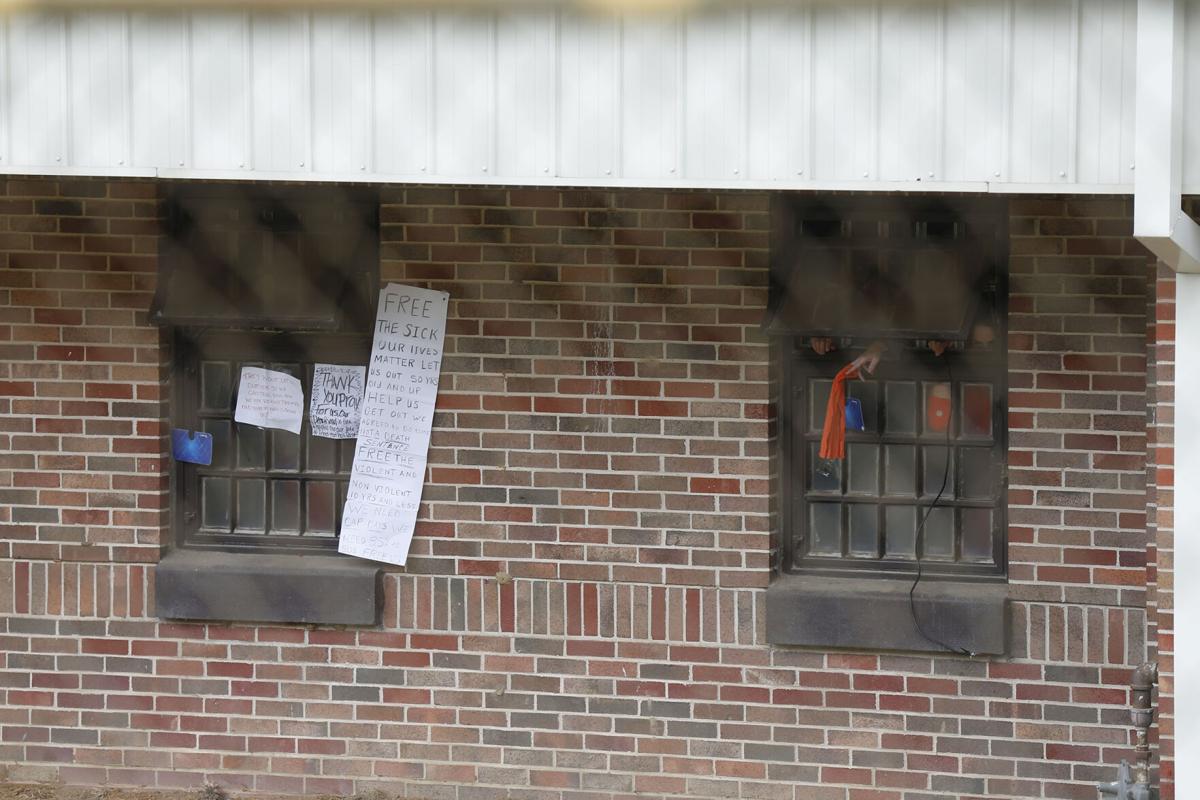 Inmates wave an orange flag out a window at the Eddie Warrior Correctional Center during the Orange Lives Matter protest outside the gates in Taft on Friday. The signs tacked to the building at left ask for prayers and say the inmates agreed to serve their time — not a death sentence. 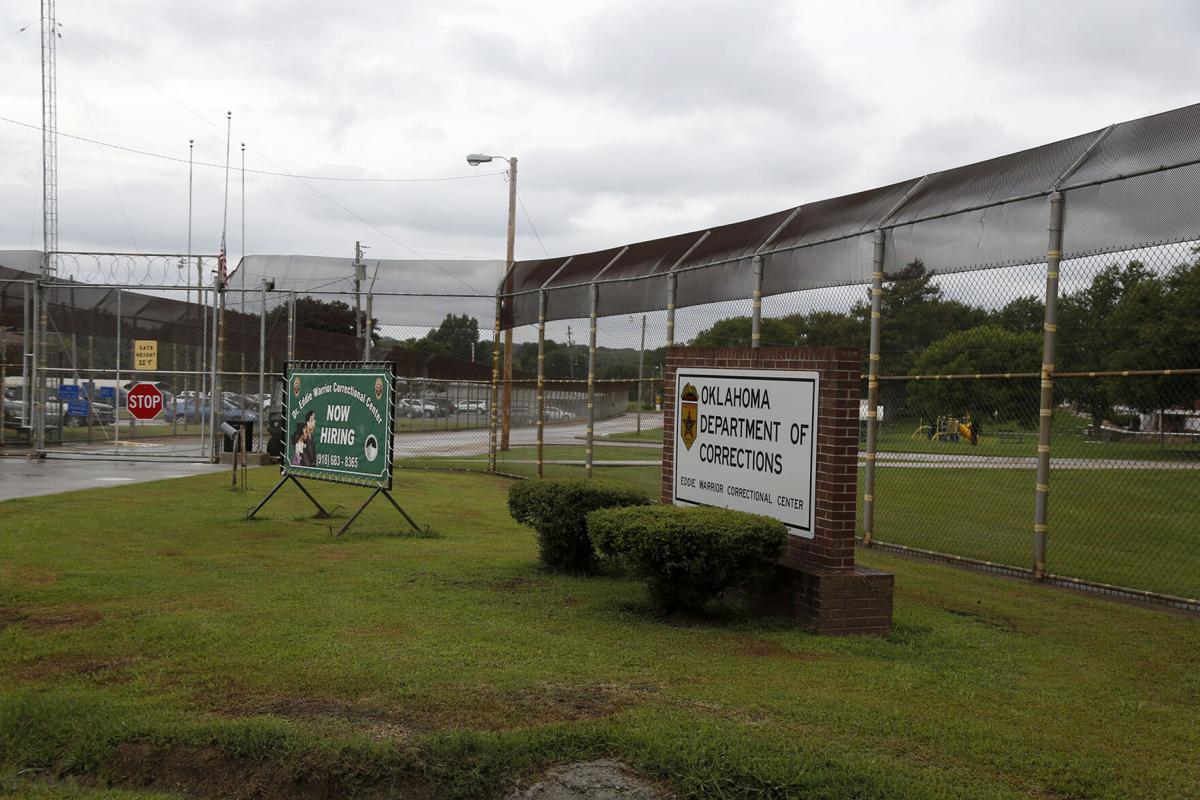 The Eddie Warrior Correctional Center at Taft is the site of the Oklahoma Department of Corrections' worst hot spot for COVID-19. 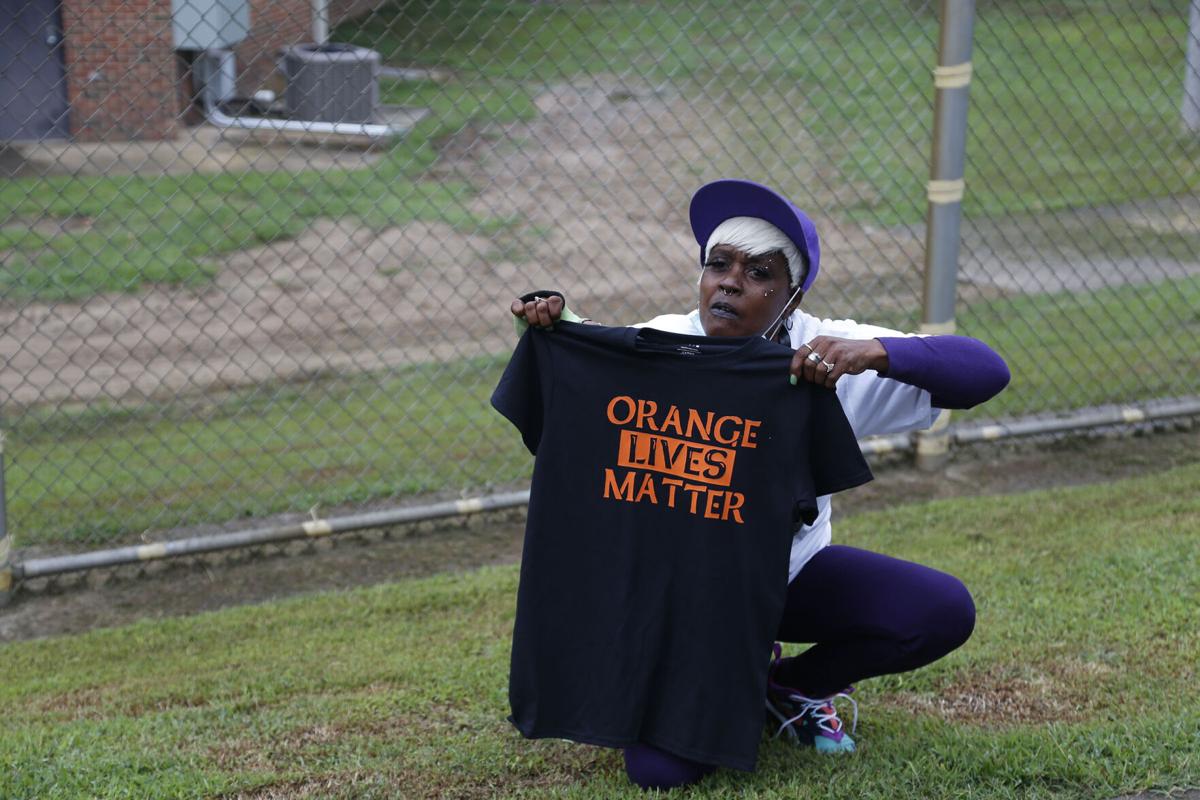 Angie Pitts kneels outside the Eddie Warrior Correctional Center in Taft during an Orange Lives Matter protest on Friday.

TAFT — Malinda Halliburton stood outside Eddie Warrior Correctional Center on Friday and explained the challenges of caregiving for a teenager whose mother is incarcerated at the facility, a COVID-19 hotspot and the site of a suspected death from the virus.

"It's heartbreaking because she's talking to her mom and her mom has COVID-19," said Halliburton, a co-organizer of the "Orange Lives Matter" rally held outside the prison grounds Friday afternoon, which drew about 65 participants.

The Oklahoma Department of Corrections issued a news release during the rally indicating that more than 400 women who tested positive for COVID-19 at Eddie Warrior, a minimum security prison, have since been classified as "recovered."

But the epidemic in the facility, which the DOC has acknowledged is a COVID-19 hot spot, affected upwards of 80% of the prison population at its worst point.

The Department of Corrections' website said Friday that as of Thursday, 352 Eddie Warrior inmates were still positive for the virus that causes COVID-19 and that one of them was in a hospital.

The designation means a prison will receive a higher allocation of personal protective equipment for staff, will get more access to testing and will bar visitors and volunteers, spokeswoman Justin Wolf has said.

Activists have criticized the latter, saying the lack of volunteers' being able to see the conditions complicates the understanding of how serious the problem is.

Halliburton, in her remarks, said that "these women just want to do their time" and not be at risk of dying when they are unable to isolate safely.

Kris Steele, executive director of Oklahomans for Criminal Justice Reform, said in a statement provided to rally organizers that "the environment inside prisons fosters health hazards and unsafe conditions, especially during a pandemic. People in prison are three times as likely to die of COVID-19 as people on the outside."

Of the outbreak at Eddie Warrior, Steele said, "This is the first but almost certainly not the last outbreak in Oklahoma prisons. All possible steps to protect people must be taken now."

The DOC has resisted directly linking the death of the Eddie Warrior inmate to COVID-19, instead saying an autopsy will determine her cause of death and reporting that she had "several health issues," including symptoms of COVID-19. The DOC has not released the woman's name, but rally organizers identified her as Deanna Thomas in a news release.

Multiple women inside the open dorm-style cell blocks could be heard from outside the gates Friday afternoon expressing frustrations about the DOC's handling of the pandemic, saying Thomas's name in her memory and saying another woman is on life support.

Rally co-organizer Tiffany Walton said she spent time in New York to help with the response to the COVID-19 pandemic before returning to Oklahoma, where she was disturbed to learn that Eddie Warrior has had more than 700 prisoners test positive.

Walton and another attendee, Pamela Brown, said they've heard reports from inside the prison about the women being served carbohydrate-dense food and living with inadequate ventilation. The lack of good nutrition and airflow, the women said, means prisoners will be less equipped to fight off a possible infection.

DOC reported that 63 prisoners there were in quarantine and that nearly 680 were in isolation as of Thursday, though Walton said the facility's layout makes it virtually impossible to practice effective social distancing.

"This facility has a bunch of ladies that I have grown to just love and just pray for and give them encouragement every day," Walton said. "There's nothing being handled. I'm here (outside) all the time, and I haven't seen anyone come and handle anything."

For Brown, Thomas' death gives her anxiety about the health of her 21-year-old daughter, who is incarcerated at Eddie Warrior, likely until sometime in 2022. She said it's been a struggle to process the knowledge that COVID-19 is continuing to spread there.

"I told my boss, I said, 'Hey I need to take off,'" Brown said. "For me, because my daughter is my only child, I have a tendency to try to be really strong for her. But it took me until last night to really process all of this."

Brown and another attendee, Angie Pitts, called on Gov. Kevin Stitt to evacuate Eddie Warrior for cleaning and for the release of as many prisoners as possible during the pandemic, even if they are given ankle monitors.

Pitts, an activist from Tulsa, kneeled on the grass just beyond the prison's fence and said, "These people matter, governor. I'm pleading with you."

"We're all taking a chance by being down here of catching (COVID-19). But at least we can go home and take care of ourselves."

First District Congressman Kevin Hern gets out of the hamburger business

Hern said Thursday he's sold the last of the franchises that made him a millionaire, moved him to Oklahoma and helped propel him into Congress.

Gov. Stitt signs pair of bills that focus on how alcoholic beverages are served, sampled

One measure allows for the purchase of cocktails to go from restaurants, while the other allows for samples of alcoholic products.

Proposal for Trump highway gets revived thanks to bill language change

The Donald J. Trump Highway bill has reappeared, apparently with slightly altered language that gets around rule on naming things for people who are not deceased.

Proposed federal legislation would permit each tribe to negotiate on its own with the state regarding criminal jurisdiction.

The Oklahoma House regularly passes measures, often introduced by Rep. Mark McBride, that are supportive of Israel, and earlier Friday it had welcomed to the House floor representatives of an Israeli aerospace firm moving to Tulsa.

Bill that would ban honking at bicyclists, animal-drawn vehicles goes to governor

HB 1770, by Rep. Mike Dobrinski, R-Okeene, would make it a misdemeanor to honk at an animal-drawn vehicle — or a bicycle — and also clarifies bicycle traffic law.

Meetings and events: British politician and commentator Nigel Farage, best known for leading the movement that resulted in the United Kingdom’s leaving the European Union, will speak at 6:30 p.m. Thursday at The Embassy, 7100 E. 31st St.

Rep. Kevin West and others argued that white children — and especially boys — are being taught to "hate themselves" because of past actions over which they had no control, such as slavery, segregation, discrimination, the dispossession and near-annhiliation of American Indians and the treatment of women and non-conformists.

The Governor's Office says he has yet to receive the final version of the measure.

Pamela Smith (left), former state Sen. Connie Johnson and Pamela Brown, who has a daughter at Eddie Warrior Correctional Center, walk the fence line during an Orange Lives Matter protest outside the women's prison in Taft on Friday.

Inmates wave an orange flag out a window at the Eddie Warrior Correctional Center during the Orange Lives Matter protest outside the gates in Taft on Friday. The signs tacked to the building at left ask for prayers and say the inmates agreed to serve their time — not a death sentence.

The Eddie Warrior Correctional Center at Taft is the site of the Oklahoma Department of Corrections' worst hot spot for COVID-19.

Angie Pitts kneels outside the Eddie Warrior Correctional Center in Taft during an Orange Lives Matter protest on Friday.