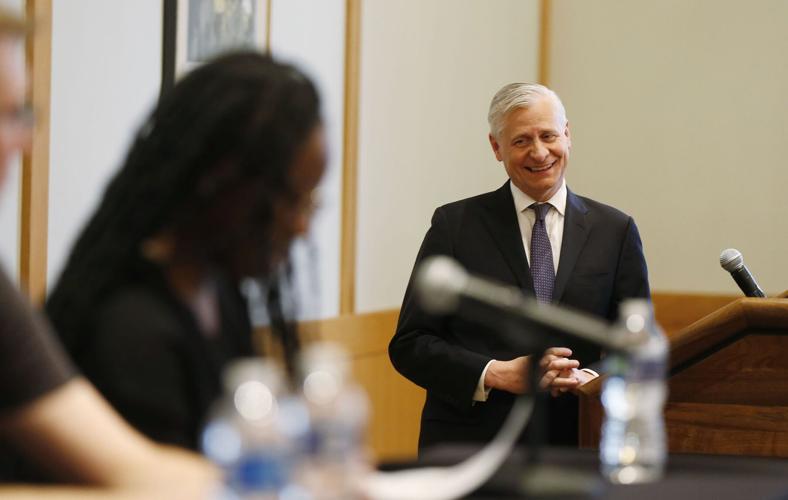 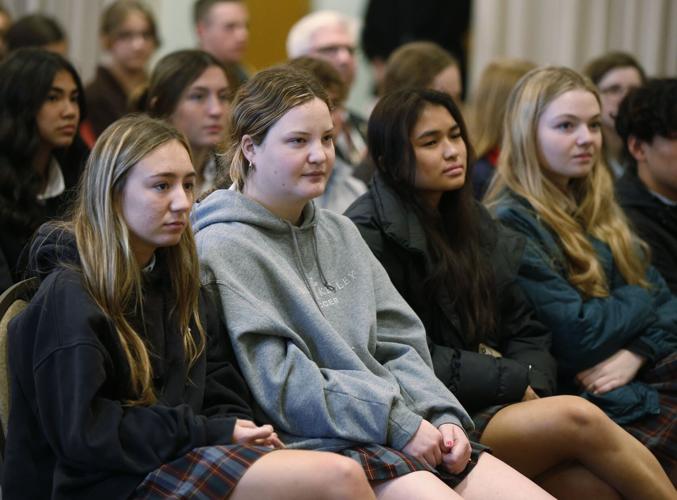 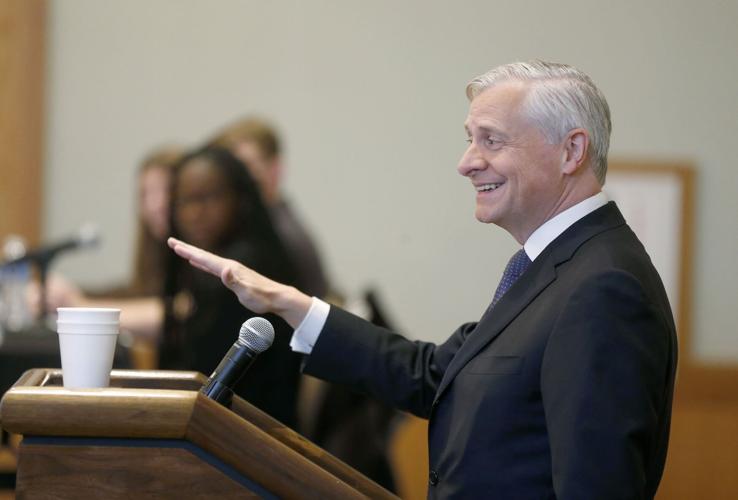 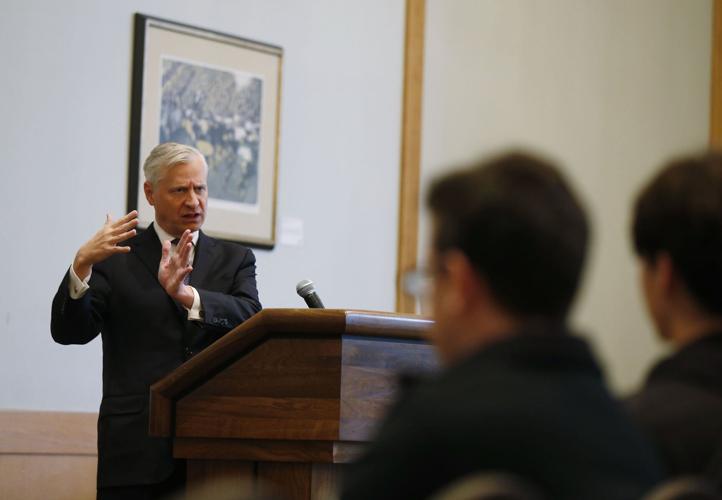 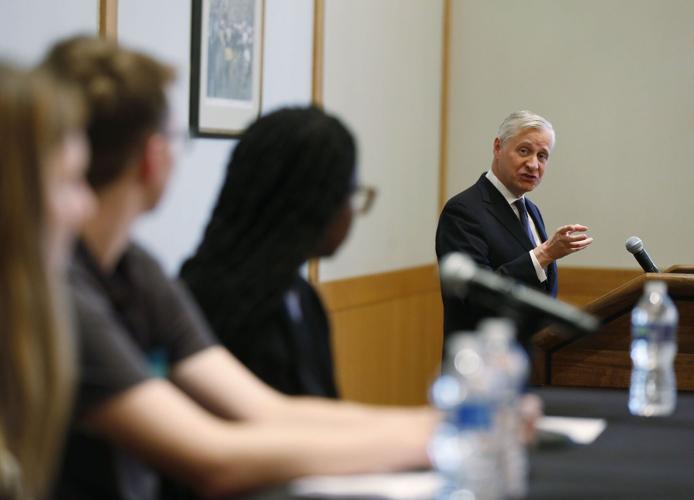 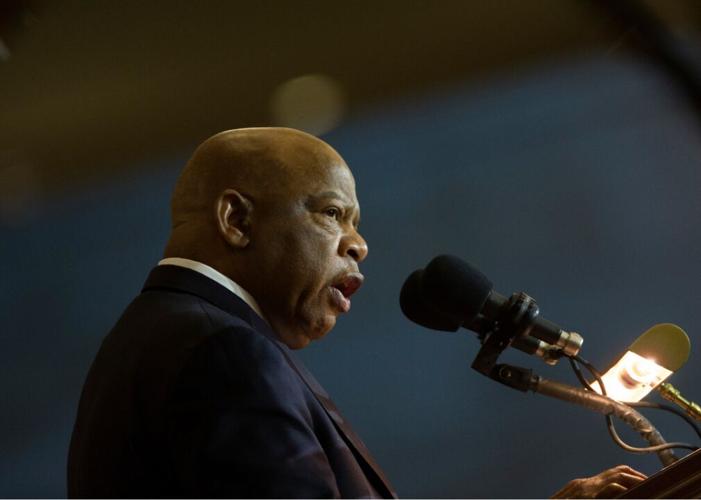 Returning in 2020 to the Edmund Pettus Bridge, where police had beaten him 55 years earlier on Bloody Sunday, U.S. Rep. John Lewis implored to the crowd: “Go out there; speak up; speak out. Get in the way. Get in good trouble, necessary trouble, and help redeem the soul of America.” Lewis himself had gotten into plenty of “good trouble” over the years, being arrested 41 times as the result of civil disobedience during his lifelong fight for civil rights.

Biographer Jon Meacham says most of his subjects have been flawed.

They weren’t perfect — or even good most of the time, Meacham told a Tulsa Town Hall audience. They only acted on the side of the angels “just enough of the time” to keep the country from falling apart.

“I write about sinners,” he said.

The exception, Meacham said, was the late Congressman John Lewis of Georgia.

“John Robert Lewis is a saint in a New Testament sense,” he said. “He was willing to die for those beliefs, and he never raised a hand in violence against anyone else, including persecutors who tried to kill him.”

Meacham’s book “His Truth is Marching On: John Lewis and the Power of Hope” tells the story of a Black Alabama sharecropper’s son who became one of the most respected men in America. A civil rights leader known for his moral and physical courage and toughness, Lewis became known as the “conscience of Congress.”

“John Lewis was willing to die for two tributaries of faith,” Meacham said. “One was the New Testament understanding of the Gospel. The other was a secular understanding of the American Gospel, the good news about the country which is embodied in that great sentence that ‘All men are created equal and endowed by their creator with certain unalienable rights, that among them are life, liberty and the pursuit of happiness.’”

Lewis is important, Meacham said, because he did so much to push the country to fully realize that statement.

Famously, Lewis was badly beaten by police as he and others led marchers demanding their voting rights across the Edmund Pettus Bridge in Selma, Alabama, on March 7, 1965. But even before that, he had put his life on the line.

He was nearly killed trying to use a filling station restroom in South Carolina. Birmingham’s notoriously violent and bigoted commissioner of public safety, Theophilus Eugene “Bull” Connor, once personally drove Lewis to the Tennessee state line.

When Lewis returned, against the advice of friends and associates, he was shipped off to the equally notorious Parchman Prison.

Lewis was arrested 41 times during his life, Meacham said, causing him to always carry a piece of fruit, a toothbrush and a book with him, just in case.

In both a question and answer session with students prior to his speech and on stage, Meacham alluded to this month’s elections and what he deemed a narrow victory for the Constitution and the country.

Later, during the lecture, Meacham was a little more blunt.

“We — I say ‘we’ because I’m a constitutionalist — won a battle in that midterm election,” he said. “Not the war, because the war is perennial. But what makes us keep fighting (for the republic)? What’s the why?

“Part of the why, I think, is that somebody like John Lewis was willing to die for this experiment. All you and I have to do, really, is vote, pay attention, and don’t be crazy.”

With the Legislature having outlawed abortion in almost all instances in the state, Oklahomans might get a chance to legalize abortion themselves through a state question.

Oklahoma House of Representatives leadership reportedly fired Amari Kimbro less than two months after she had attempted to calm a confrontation between Black Lives Matter protestors and Republican lawmakers.

In their letter to the attorney general, lawmakers said the use of abortion pills had become a way around Oklahoma's ban.

The Cherokee Tribal Council confirmed Kimberly Teehee in 2019 as the nation's delegate to Congress as authorized by the 1835 Treaty of New Echota.

"We're still trying to decide as Republicans whether we want to beat people down or win people over."

Built inside a former casino building near the tribal headquarters in Tahlequah, an hour southeast of Tulsa, the Durbin Feeling Language Center will open Tuesday.

Hoskin 'quite encouraged' as Cherokees press case for House delegate

The Cherokee Nation is attempting to implement a provision in its removal treaty, signed in 1835 and ratified by the U.S. Senate the following year, that promises the Cherokees a House delegate "whenever Congress shall make provision for the same."

Returning in 2020 to the Edmund Pettus Bridge, where police had beaten him 55 years earlier on Bloody Sunday, U.S. Rep. John Lewis implored to the crowd: “Go out there; speak up; speak out. Get in the way. Get in good trouble, necessary trouble, and help redeem the soul of America.” Lewis himself had gotten into plenty of “good trouble” over the years, being arrested 41 times as the result of civil disobedience during his lifelong fight for civil rights.