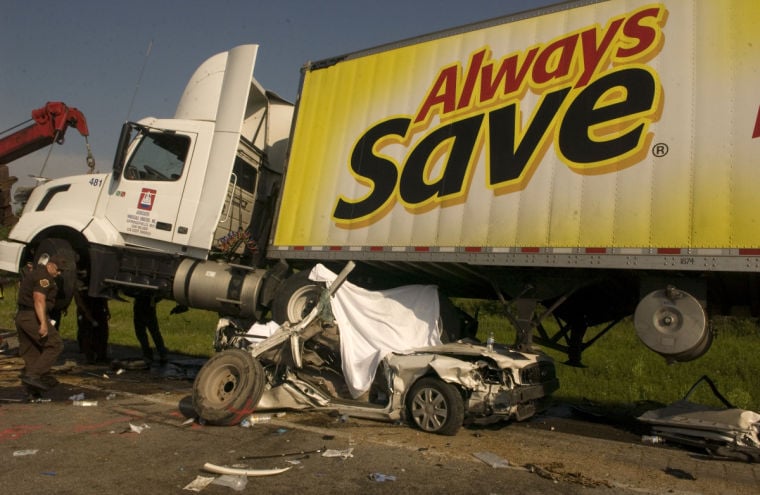 Tow truck lifting a truck off a car which was part of a multi-car crash with eight fatalities five years ago on Will Rogers Turnpike eastbound at mile marker 321. Tulsa World file 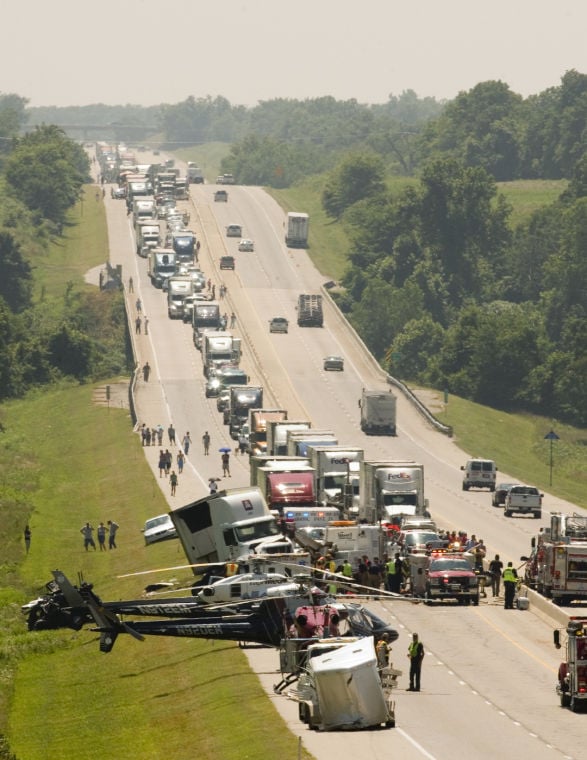 Emergency crews respond to a fatality crash on Will Rogers Turnpike, eastbound at mile marker 321 on June 27, 2009. Ten people, including a 7-year-old, died in the crash. GARY CROW/For the Tulsa World

MIAMI, Okla. — A trucking regulation implemented last year that limits the time a trucker is on the road is believed to have prevented around 1,400 crashes, said Duane DeBruyne, Federal Motor Carrier Safety Administration spokesman on Friday.

Several trucking proposals concerning truck safety and fatigue issues have been implemented or are in the regulatory development process in the five years since a tractor-trailer crash on the Will Rogers Turnpike killed 10 people in an accident the Oklahoma Highway Patrol lists as one of the state’s deadliest crashes.

Although the implementation of the fatigue-related regulations cannot be directly linked to the I-44 crash, the circumstances surrounding the crash cannot be dismissed, DeBruyne said.

Ten people, ranging in age from 7 to 69, died on June 26, 2009 in the seven-vehicle pileup. A tractor-trailer plowed into the back of another vehicle, setting off the chain reaction. The vehicles in front of the truck had slowed because of traffic congestion caused by a prior collision.

Donald Leroy Creed, 81, of Willard, Missouri, was driving the rig. The then-77-year-old truck driver had been driving for about 10 hours before the crash, according to an arrest affidavit.

He was not under the influence of alcohol or drugs, nor was he speeding. Creed was driving 71 mph, four miles under the turnpike speed limit of 75 mph, the affidavit states. He had also concluded a 22-minute cell phone call eight minutes before the crash, records show.

Witnesses said they never saw brake lights and the truck changed lanes without signaling. There were no skid marks on the highway, and no defects were found in the tractor-trailer rig, troopers said.

The National Transportation Safety Board blamed fatigue for the fatal crash along with acute sleep loss, shift work schedule and mild sleep apnea.

“Driver fatigue has been identified as an important crash cause,” according to Large Truck Crash Causation Study released by the Federal Motor Carrier Safety Administration in 2006 and updated in April. “It is known that many drivers drive while fatigued, but accurate estimates are not available.”

Other causes include alcohol, illegal drugs, unfamiliar with the area and driver inexperience, according to the study. Oklahoma had 124 fatal truck crashes in 2012, according to the National Highway Traffic Safety Administration. Out of those, only two or 1.6 percent involved a drowsy truck driver, the federal agency said.

Data released by NHTSA shows 78 percent of the fatal crashes nationwide involving large trucks occurred on weekdays. Of those weekday large-truck fatal crashes, 72 percent occurred during the daytime hours of 6 a.m. to 5:59 p.m.

Currently the maximum average workweek for truck drivers is 70 hours, a decrease from the previous maximum of 82 hours, according to the federal agency.

“Safety is our top priority,” DeBruyne said. “We know from research and experience that a fatigued driver is a dangerous driver.”

The hours-of-service rules that have now been in place for one year are the product of extensive, real-world research and save an estimated 19 lives by preventing 1,400 crashes each year so that we can keep truck drivers – and the families they share the roads with – safe, he said.

“That’s why we are very concerned about attempts to relax, even temporarily, the number of hours a truck driver could work from the 70-hour maximum on the books today,” DeBruyne said.

Other new policy changes are allowing truck drivers who reach the maximum 70 hours of driving within a week to resume if they rest for 34 consecutive hours. The rest is to include at least two nights — from 1 to 5 a.m. Finally, truck drivers are required to take a 30-minute break during the first eight hours of a shift, the agency states.

These changes went into effect July 2013.

Creed pleaded guilty to 10 misdemeanor counts of negligent homicide and was sentenced to 30 days in jail and 10 years probation. Lawsuits against Creed, truck owner Associated Wholesale Grocers and insurers were settled for $62.7 million.

“It was the worst loss of life in a single event collision in the history of the patrol,” said Lt. George Brown, Oklahoma Highway Patrol spokesman. “It was just a terrible, unfortunate and devastating accident.”

The pileup near the Miami exit shut down the eastbound lane for over seven hours. At one point traffic was backed up for 14 miles.

The blistering heat on the asphalt was in triple digits and the scene of dead bodies, twisted metal, broken glass, blood and medical helicopters landing on the highway resembled a war zone. Debris was strewn for miles along the turnpike.

“Those are the worst memories of my life,” said Tulsa resident Marcella Smith, one of the 11 surviving victims. “I will not go on the turnpike. It took me the longest time to get in a car.”

Smith and her husband, Larry, and her then-13-year-old granddaughter and her friend were headed to Missouri for the teen’s birthday celebration.

Smith was sitting in the front passenger side.

“We had stopped because of the wreck,” Smith said. “Then I heard a pop pop pop, and when I turned to look over my left shoulder we got hit by a truck on the passenger side.”

“The heat was unbearable. I was sitting in the seat with sweat running down my face. I remember feeling the sweat and my head was pounding.”

An OHP trooper stood near the car to protect her from sun, she said. Smith said she was in and out of consciousness and when she saw a medical helicopter coming toward her and landing on the highway just in front of her car, she thought of the 1970s television show “M*A*S*H*.”

“There was a nice couple from Texas and they stayed with me until the ambulance arrived,” Smith said.

Smith said she was hospitalized off and on for three weeks. She suffered three broken vertebra, a concussion, swelling of the brain and she temporarily lost her hearing and eyesight.

Today she struggles with short-term memory loss and migraine headaches, she said.

“I don’t hold any grudges,” Smith said of Creed. “He was a man just trying to make a living. I blame the trucking industry. He shouldn’t have been working that many hours at his age. “When I think about the accident, my heart breaks for the families. There were so many stories. Each car had its own story.”

Todd Burk of Grove, who has been driving trucks for around five years for Tyson Foods, is now driving a 2015 Volvo test truck for the poultry company.

The truck is outfitted with a safety lane departure warning system, he said.

“A camera detects when you are departing from your lane and makes a noise resembling rumble strips on the side of road,” Burk said. “There is also a beeping noise that indicates when you are following the vehicle in front of you too close.”

The test truck also has an enhanced cruise so if a driver is driving 70 mph and the vehicle in front of him slows down, the truck automatically slows down.

After the I-44 fatal crash, state Sen. Earl Garrison, D-Muskogee, introduced Senate Bill 1317. The bill, which died in committee, would have reduced the maximum speed laws for commercial truck drivers on Oklahoma’s turnpikes from 75 mph to 65 mph.

With the high-profile trucking accidents like the accident that injured actor-comedian Tracy Morgan, Garrison said he plans on refiling the bill. Morgan’s limousine van was hit from behind by a Wal-Mart truck on the New Jersey Turnpike, according to published reports.

Garrison said he was prepared for the barrage of opposition from trucking companies. What happened was the opposite and surprising, he said.

“I got a call from a (out-of-state) trucking company,” Garrison said. “The (trucking company) owner said he favored the bill and he had a self-imposed rule on their 18-wheelers (requiring them to drive a reduced speed.)”

Any time a motorist passes a semi in inclement weather, such as heavy rain, there are many safety issues, he said.

“At the end of the day there are (truck) drivers driving too many hours and a lot more fatalities,” Garrison said.

Ten people died as a result of the crash on Interstate 44. They were:

'Omicron is very, very serious': 41,400 lives could be saved if we double booster shots

Public health and medical experts warn people not to take the variant lightly and encourage everyone to be up to date on their COVID-19 vaccinations as variants challenge waning immunity levels.

Cherokee Nation Principal Chief Chuck Hoskin Jr. lauded the U.S. Supreme Court's decision not to overturn its ruling in McGirt v. Oklahoma. The court said it will evaluate whether the state has the authority to prosecute non-Indians who commit crimes against Indians in Indian Country.

The state is No. 2 in COVID hospital admissions and No. 2 in test positivity. The three-day average for COVID hospitalizations is now 6% above the worst during the delta surge in August.

"This time it feels and sometimes even looks like a warzone," said Dr. Julie Watson, chief medical officer for Integris Health.

U.S. Supreme Court carries over decision on whether to take McGirt appeals

The non-decision, the second in consecutive weeks, means the state of Oklahoma’s quest to overturn the controversial 2020 ruling is still alive as new McGirt-based cases continue to be filed in federal and tribal courts.

Wagoner County authorities were alerted that a "no bond" arrest warrant had been issued for the man, 31-year-old Steffon Griffin of Toppers, for an alleged violation of a protective order.

Tow truck lifting a truck off a car which was part of a multi-car crash with eight fatalities five years ago on Will Rogers Turnpike eastbound at mile marker 321. Tulsa World file

Emergency crews respond to a fatality crash on Will Rogers Turnpike, eastbound at mile marker 321 on June 27, 2009. Ten people, including a 7-year-old, died in the crash. GARY CROW/For the Tulsa World 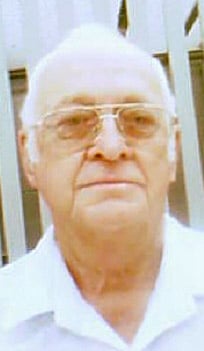