COVID-19: Newly reported cases in Tulsa County surge to highest level yet
Share this
{{featured_button_text}}
1 of 2 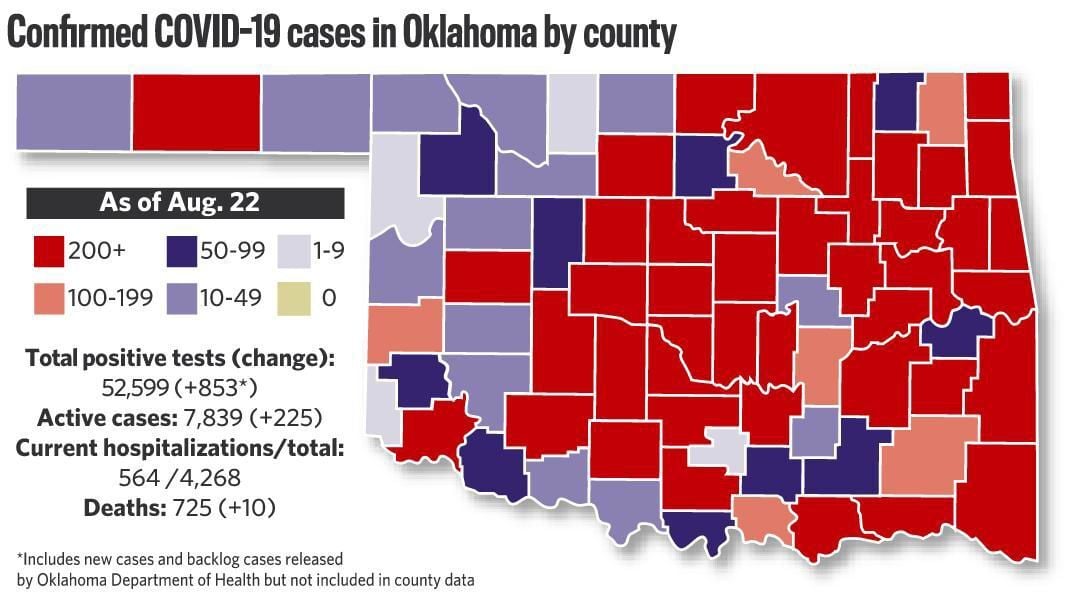 Correction: This story misreported the previous daily high of new cases. The story has been corrected.

The number of newly reported COVID-19 cases in Tulsa County has reached a new high.

The four-day average of new cases in Tulsa County also reached a new high. In the last four days, an average of 32 new cases were reported, surpassing the average of 31 on April 3 and April 4.

A Tulsa Health Department spokeswoman said epidemiologists are conducting investigations, including contact tracing, to determine how people may have contracted the disease.

Until those investigations progress, “there’s not one single incident we can point to to explain that,” Tulsa Health Department spokeswoman Leanne Stephens said. “As we begin to move about more and test more, we will see that increase.”

Five more people have died of COVID-19 in Oklahoma, the state reported Tuesday. There were 158 new cases statewide.

In addition to Phase 3, there have been large crowds across Oklahoma gathering for protests against police brutality and the police killing of George Floyd.

A spokeswoman for the governor pointed out that the state’s testing capacity has quadrupled in the past month and the percentage of positive cases is at an all-time low.

“Oklahomans need to remain vigilant with washing their hands, staying physically distant and following additional public health guidance, as there is still no global cure for the virus.” Communications Director Baylee Lakey said.

The five deaths occurred between April 5 and June 7 but were reported Tuesday in Oklahoma State Department of Health data.

The youngest among them was a Nowata County man in the 18-35 age group. Three women, from Tulsa, Muskogee and Oklahoma counties, died from the disease. Two were older than 65 years old. The Tulsa County woman was in the 50-64 age group.

A Cleveland County man, who was older than 65, also died from the disease.

Stephens encouraged Oklahomans to continue practicing the measures used to prevent the spread of the disease as the state continues to navigate the pandemic.

COVID-19 has an incubation period of two days to two weeks, during which time a person may be contagious but not have symptoms.

Social distancing means staying out of group or congregate settings, avoiding mass gatherings and maintaining a distance of at least 6 feet from others.

An Oklahoma City police officer has been charged with first-degree manslaughter in the deadly shooting of a 60-year-old mentally ill Black man.

"Hopefully we've learned our lesson that quickly reopening and returning to 'normal social behavior' does not help us," said Dr. Jennifer Clark during her COVID-19 presentation Wednesday for Project ECHO.

The state paid to have its vehicles repaired.

Running riot: Legislation that Oklahoma lawmakers say is intended to curb rioting but others view as attempts to curb dissent continued moving out of committee last week.

The Amber Alert for Lylah Spencer was canceled after she was found Tuesday night, officials reported.

Cherokee chief's remarks get international attention, but it's not just about Jeep

Using the Cherokee name “comes from a place that is well-intended,” Principal Chief Chuck Hoskin Jr. said, “but it does not honor us."

The state's online vaccine portal opened Sunday to members of the next priority group in Phase 2 of the state's vaccination plan to allow scheduling of appointments as soon as Monday.

The state’s rolling average of daily reported new cases now stands at 863, the lowest the metric has been since mid-September.