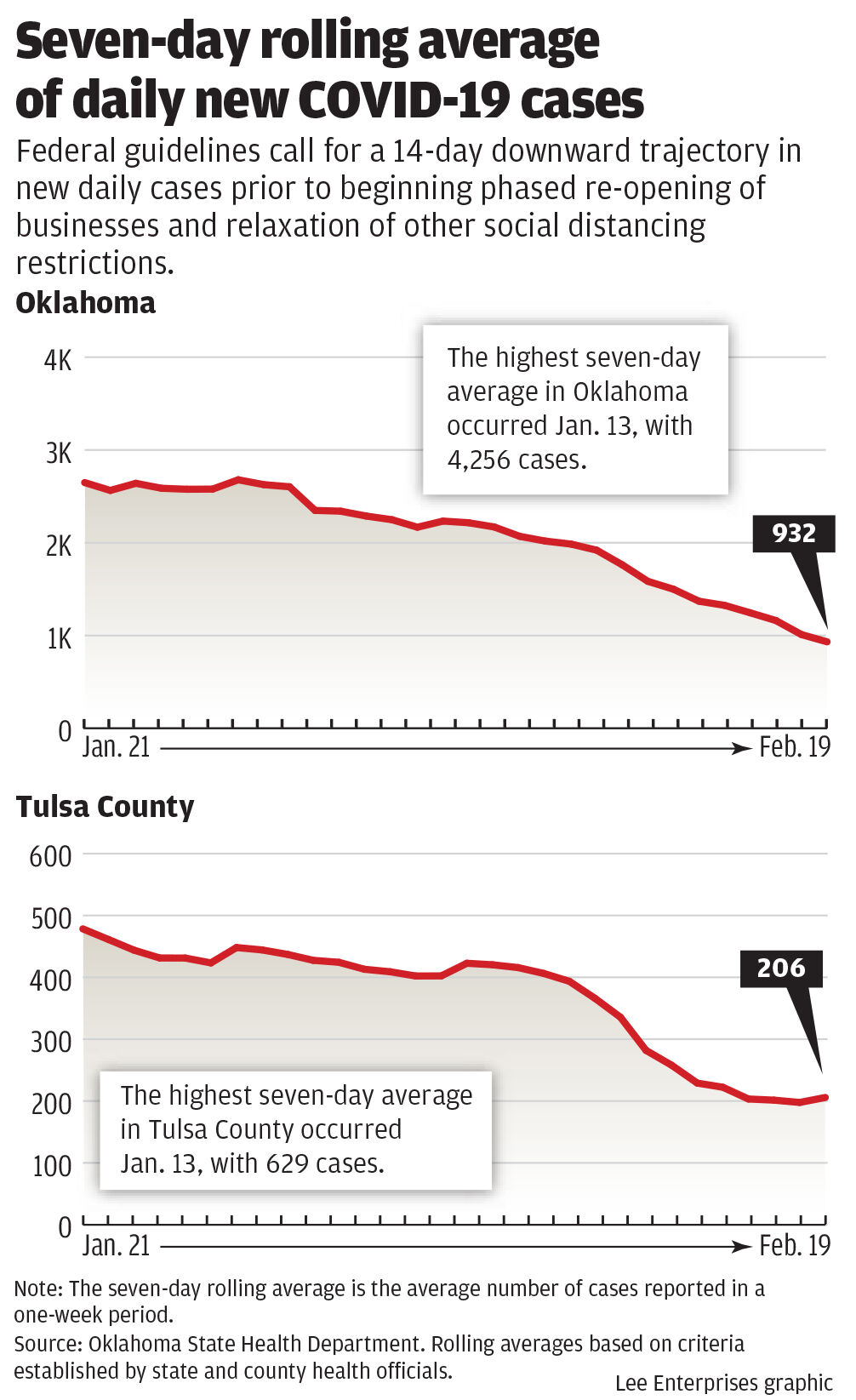 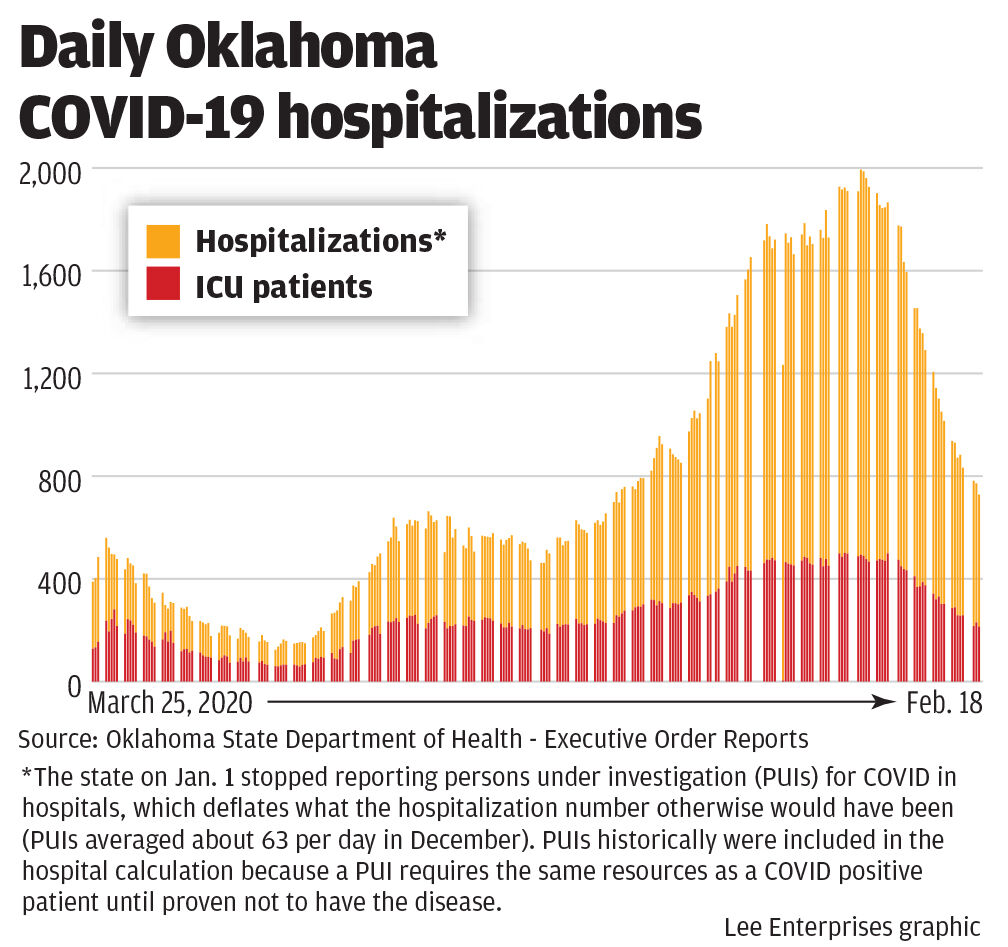 Where to get a COVID-19 test around Tulsa

Twenty more Oklahomans’ deaths due to COVID-19 were reported Friday as the state’s rolling average of new daily confirmed cases of the virus dropped below 1,000 for the first time in five months.

The Oklahoma State Department of Health reported 869 new cases on Friday, the fourth day this week the state recorded fewer than 1,000 new cases confirmed daily. A total of 1,078 cases were reported Wednesday.

The state’s rolling average of daily reported new cases dipped to 932 on Friday, the first time the metric has been below 1,000 since early October.

Oklahoma dropped from its top spot in the nation for test positivity on Thursday. The state now claims third place, which is the lowest rank it has seen since mid-December.

A total of 417,345 cases have been confirmed in the state since March, with 4,132 recorded deaths due to the virus and 396,736 patients considered recovered, according to Oklahoma State Department of Health data.

A total of 728 patients with confirmed cases of COVID-19 were hospitalized across the state Thursday, with 214 patients in ICU beds. More than 16,470 residents still have active infections, according to OSDH data.

COVID-19 by the numbers

The data below are current as of 3 p.m. Friday.

Who is eligible currently?

What determines how many appointments are available?

I signed up at vaccinate.oklahoma.gov but never got an email confirmation of any kind — what should I do?

I’ve been told I can make an appointment, but I went to the portal and there were none available within 100 miles — what do I do now?

When will new appointments be added to the online portal as the state is updated on the supply of vaccines expected to ship from the federal government?

Someone I know is unable to go online to access the vaccination portal — how can they make sure to get an appointment?

How are 211 and LIFE Senior Services trying to help?

Who else is trying to help people book appointments?

Can I show up at a vaccination site without an appointment to wait for someone to miss their scheduled time?

What happens if I am unable to make my scheduled appointment? Can it be changed?

At what point do I schedule my second dose or "booster shot"?

I can't get an appointment for my booster dose when I am supposed to — is it OK to take it any later?

Can I choose whether I receive a Moderna or Pfizer shot?

Will I be able to drive-through to get my vaccination or will I have to go inside a facility?

If I have already had COVID-19, do I still need to consider getting the vaccine?

Do I still need to practice the three W’s after getting my vaccination?

Can you be a carrier of the virus after receiving a vaccination?

Why do I have to wait 15 minutes before being able to leave after my vaccination, and what side effects are common?

How many vaccine doses have gone to waste in Oklahoma?

What exactly is at the bottom of this mysterious 'blue hole?'

What exactly is at the bottom of this mysterious 'blue hole?'

Amid fuss over other states' election law changes, Oklahoma said to 'strike a good balance'

"You don't want things so convenient that you don't even know when fraud might be occurring, but on the other hand you don't want it so secure no one can vote," the state election board secretary says.

The Oklahoma State Health Department reported 1,051 new cases for the one-week period that ended Saturday, bringing the seven-day rolling average of daily new cases back up to 150 after a low of 116 not seen since March 2020 the week before.

“Slavery has played a huge part in my family and in my community,” said Tullahassee Mayor Keisha Currin. “This program is going to show our community that we care.”

The William S. Key Correctional Center, a minimum-security facility in Fort Supply, about 13 miles north of Woodward, will close by the end of the year, the Department of Corrections said in a news release.

A 25-year-old man died late Friday after losing control of and crashing his vehicle on a Seminole County road, the Oklahoma Highway Patrol reported.

Charles Drushal, 76, of Fort Smith was driving a 2005 Jeep Grand Cherokee north on Oklahoma 112 about 2 miles south of Cameron when the vehicle went left of center and hit a southbound 2011 Chevrolet Traverse about 11:15 a.m. Friday, troopers said.

Lawmakers were miffed last year by Gov. Kevin Stitt's nearly complete control of CARES Act funds, and passed legislation assuring they will have a say in how this latest round of COVID-19 relief is spent.