Wild-card weekend: Updates and scores from the NFL playoffs

An electron microscope image shows SARS-CoV-2 virus particles. Delta-plus is a more recent mutation of the delta variant that is said to be slightly more infectious. Researchers speculate that the size of the delta variant surge across the U.S. provided enough immunity via natural infection and vaccinations to stymie delta-plus so far, though it represents about 70% of new U.K. cases of COVID-19. 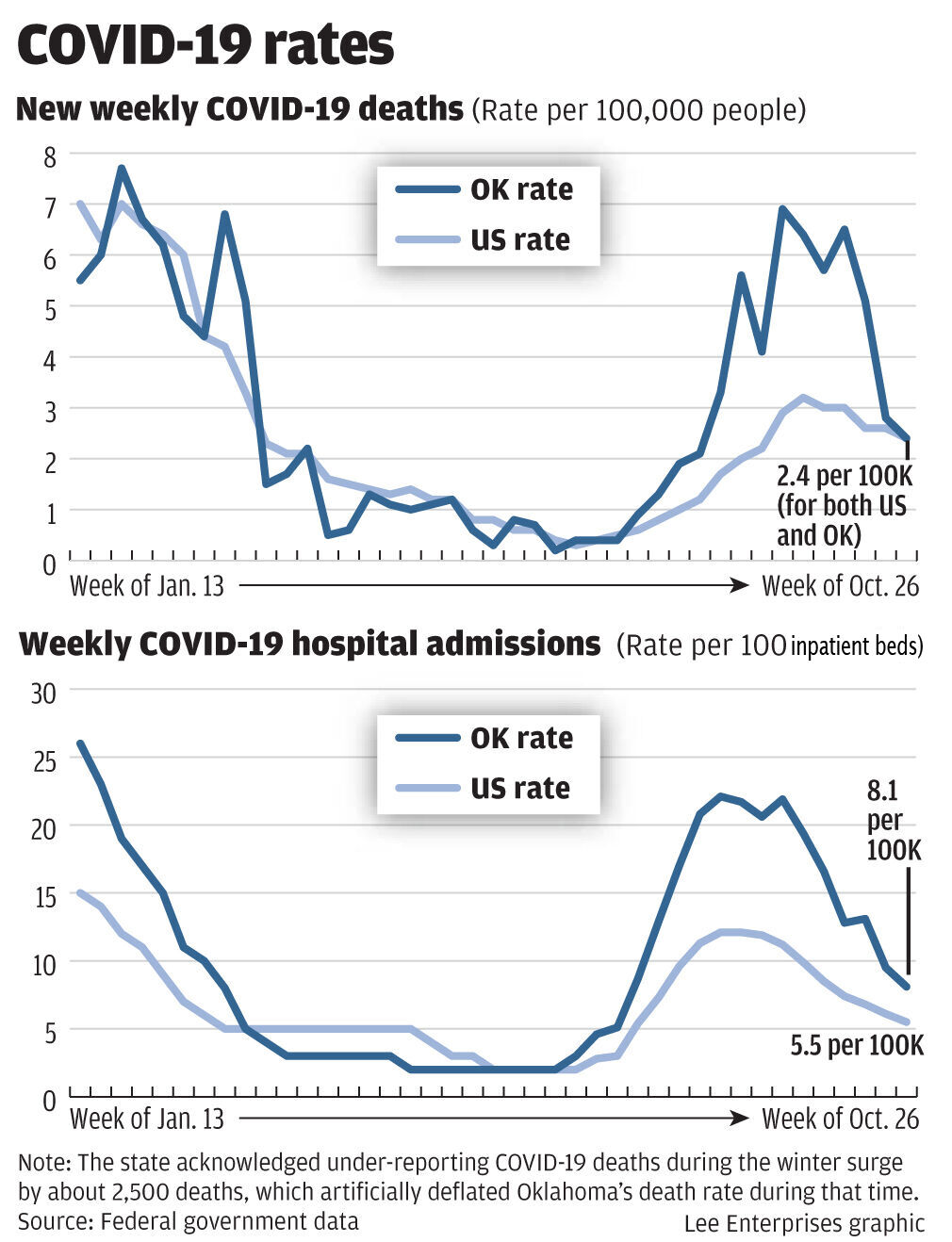 Complacency is the one issue that can still cause trouble and further prolong the pandemic, says Dr. Dale Bratzler, OU’s chief COVID officer.

For the first time since June, Oklahoma’s weekly COVID-19 case rate last week was below the national rate and is substantially down from the delta variant’s peak.

However, both the state and U.S. case rates are roughly five times higher than in June, before the delta variant upended the low point of the pandemic this year. Oklahoma’s easing burden of the disease is welcome but not a clear indicator of or path toward ending the pandemic next year.

“I don’t think we can say that we’re out of the pandemic yet. I was reading this morning that Russia now has a huge outbreak in COVID-19; they’re seeing large numbers of cases now,” Bratzler said Tuesday during the Healthier Oklahoma Coalition’s weekly virtual media briefing. “That’s what worries me when we start talking about variants, because a new variant could come from any part of the world where there is uncontrolled spread of COVID-19.

“That’s what we saw happen in India, and we got the delta variant that came across Europe and then into the United States.”

The state is in the federal government’s light red zone for its new case and death rates and the orange zone for hospital admissions and test positivity. Oklahoma and 40 other states are still classified as experiencing high transmission of COVID — the worst designation on a four-category scale.

Experts are keeping an eye on variants, such as lambda, gamma and delta-plus.

Dr. Mary Clarke, president of the Oklahoma State Medical Association, said so far lambda and gamma don’t “seem to be a big deal.”

Clarke said delta-plus is a “small variation” of the delta variant that is “a little bit more infectious” and responsible recently for about 70% of new cases in the U.K. She said experts aren’t sure why delta-plus hasn’t similarly usurped delta as the dominant variant in the U.S.

“It is the most prominent issue that the U.K. has,” Clarke said. “It’s been effectively taking over the COVID infections in the U.K., and the expectation was that it would continue to spread westward like most viruses do globally and potentially come and take over the primary delta variant.”

Clarke said there is speculation that the delta variant surge across the U.S. was so “unreasonably huge” this summer that we have enough immunity from natural infection and vaccinations to stymie delta-plus so far.

“Whereas a lot of countries have still continued to have relatively low numbers of COVID overall and are still doing mitigation strategies — in some places better than we are — and that was able to take over,” Clarke said. “So instead of having the delta, the delta-plus became the new strain that hit that area in massive numbers.”

Clarke added that “massive numbers” for other countries pale by magnitudes in comparison to the U.S.

Oklahoma has been among the worst states in the U.S. during each surge in four key federal data points: cases, deaths, hospital admissions and test positivity.

In a measure of pandemic proactiveness, the state still ranks last in the U.S. for percentage of genomic sequencing done on specimens to look for variants, according to federal data as of Tuesday.

Oklahoma has sequenced 0.46% of its COVID specimens, nearly three times fewer than the next-worst for genomic virus testing — South Dakota at 1.32%. Iowa at 1.52%, Kentucky at 1.53% and Mississippi at 1.55% round out the bottom five.

Interim State Health Commissioner Keith Reed said that before he accepts that percentage and ranking as a fact, he wants to probe for potential state-system issues that might be leading to under-reporting of sequenced samples.

“I’m not sure I completely agree with the data that’s out there as far as how much sequencing we have done,” Reed said. “My point with that is doing some of our reviews and some of our (data) reconciliation, we feel like there may be some sequencing that hasn’t been reported through our reporting system.

“So we’re doing a little reconciliation work on that right now to try to peel back some layers and to make sure that everything that we’ve been doing in the state is reported.”

Reed said it’s a priority for the state to sequence enough COVID specimens to have an idea of what’s present across Oklahoma.

The delta variant outbreak began in southwestern Missouri and spread rapidly into Oklahoma and Arkansas.

'We've run out of shades of red': COVID-19 spread worse than ever in Tulsa County

It's hard to pinpoint where COVID-19 transmission is highest now because "it is just everywhere," Tulsa Health Department Director Bruce Dart says, with omicron found in 95% of wastewater recently tested.

'Just assume that they're infected': Hospital leaders' worries grow as about 1 in 21 Oklahomans have COVID-19

The staggering numbers are indicative of the huge strain placed on teachers, first responders, health care providers and others, says OU epidemiologist Aaron Wendelboe, but cases aren't the entire picture.

“While it may be gruesome to look at, we all agree it will be quicker," an attorney representing Donald Grant and Gilbert Postelle told a judge while seeking a delay to their executions, which are set for next month.

Amid rampant spread of the omicron variant, the previous high in Oklahoma, Sunday's 9,608 new cases, was quickly toppled. The state's seven-day rolling average jumped 83% over the previous record.

The court could consider at its next conference day, scheduled for Friday, whether to take up the state’s McGirt challenges. It could issue orders the following Tuesday.

The seven-day moving average reached a record 8,485 on Friday, which is double the prior record of 4,256 set a year ago before the highly contagious omicron variant arrived.

An electron microscope image shows SARS-CoV-2 virus particles. Delta-plus is a more recent mutation of the delta variant that is said to be slightly more infectious. Researchers speculate that the size of the delta variant surge across the U.S. provided enough immunity via natural infection and vaccinations to stymie delta-plus so far, though it represents about 70% of new U.K. cases of COVID-19.